A collection of themes from classic British horror movies, “Hammer Horror” serves more as a time capsule than a must-hear recording. 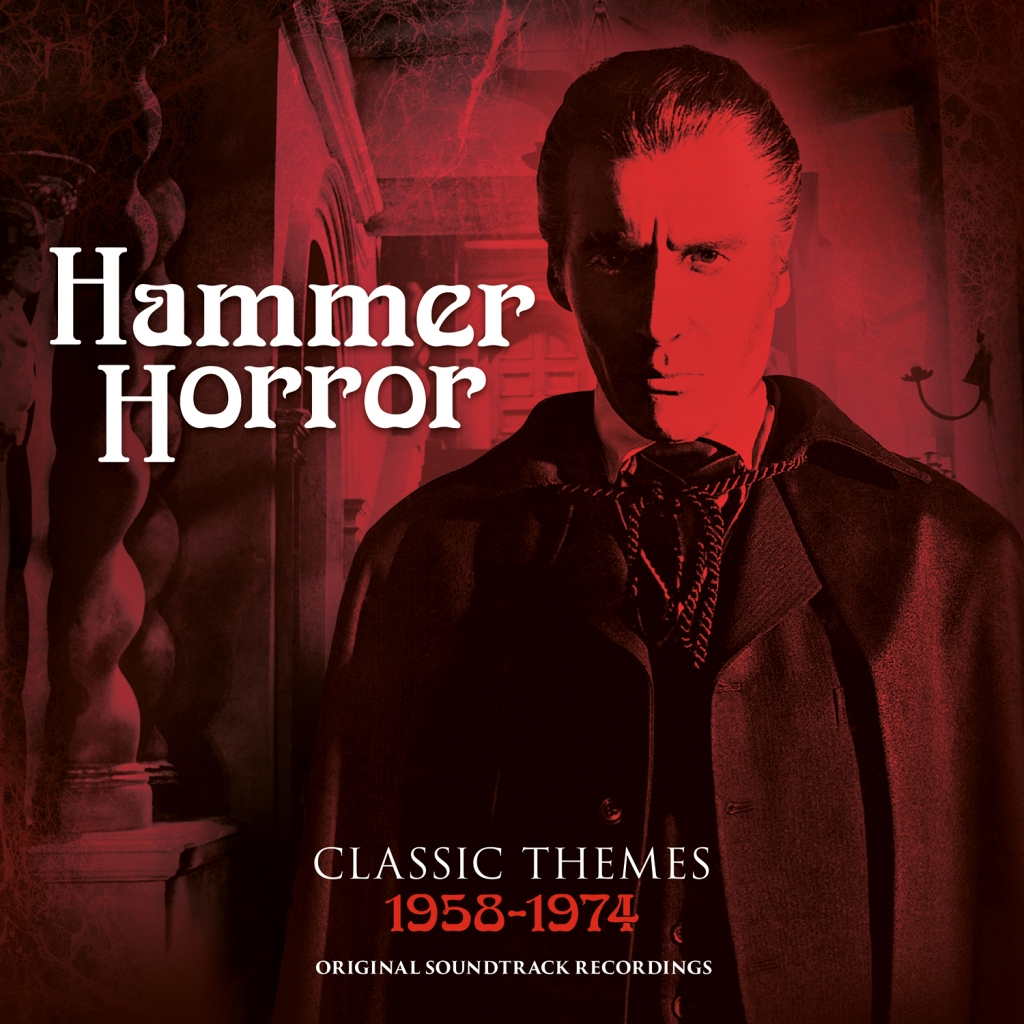 For Vinyl Vengeance’s sophomore review (read the series debut here), I wanted to take a look as far back in time as I could within my ever-growing personal collection, while also hewing close to Morbidly Beautiful’s fundamentals. Thankfully, I had just the thing.

As an unabashed lover of vinyl, I definitely find that music simply sounds better once it’s been pressed to wax. Maybe it’s due to the analog nature of records themselves. Another possibility is that less is happening behind the scenes since we are going straight from the vinyl to the needle, and from the receiver to the speakers, all without needing to be decompressed or streamed or whatever.

Or, maybe it’s simply an audio placebo; perhaps my ears really CAN’T hear the difference, but my mind has convinced myself otherwise.

Either way, I like to add to my vinyl collection as often as possible. But, out of every album within my collection, I can truly say that none genuinely deserves to be in record format as much as Hammer Horror. I mean, considering that these themes were written and performed between 1958 and 1974, vinyl just makes sense.

Featuring 18 tracks, and clocking in around 42 minutes, Hammer Horror is certainly a strange beast. 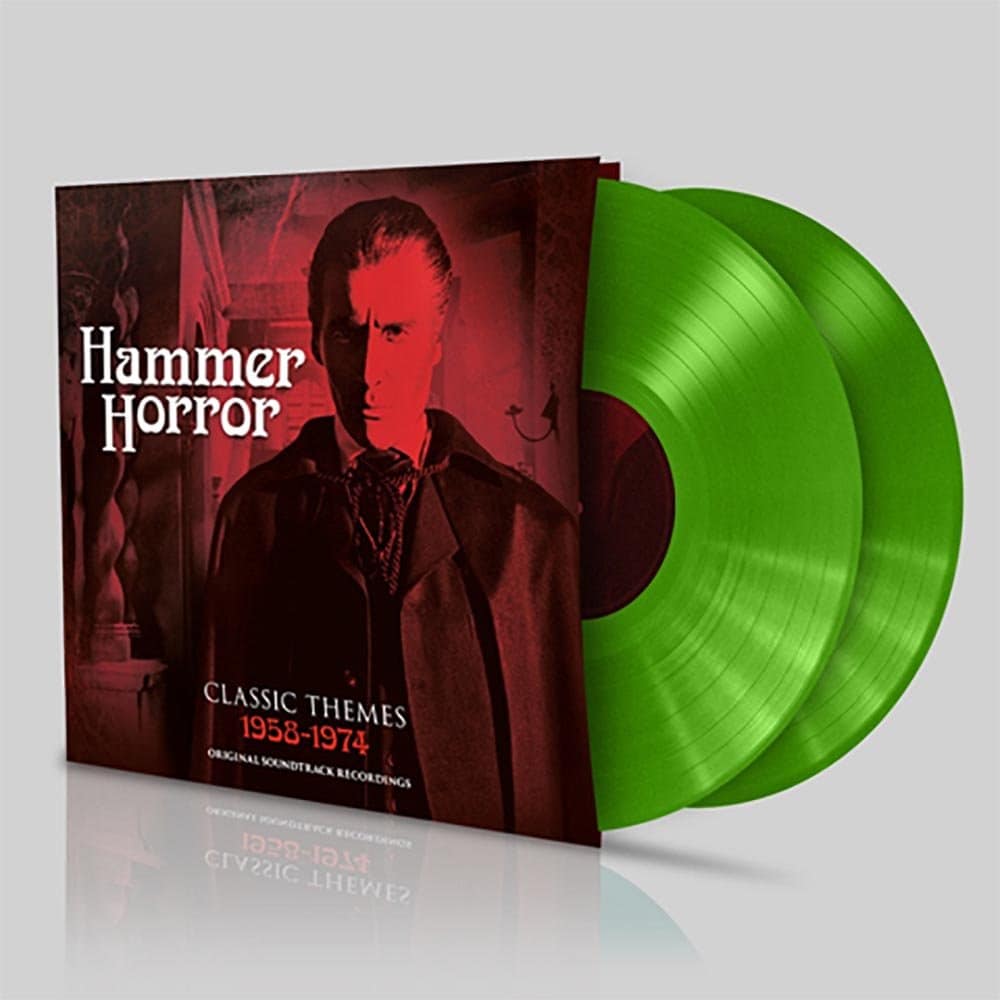 Neither full soundtrack nor “best of” compilation, it is instead a celebration of sorts, chronicling many of Hammer’s better-known movies by way of their theme songs.

As is befitting of recordings from that time period, there is a rawness to these selections that simply wouldn’t (and couldn’t) exist if they were produced today. Even during their most prolific and lucrative periods, the scores for Hammer films weren’t recorded in the top-tier studios of the era. But that rawness only helps the proceedings.

If these themes had crystal-clear microphones, with multi-channel crossfades, spatial audio, and other modern studio trickery, they wouldn’t sound nearly as haunting or mesmerizing.

Of course, I use the term “haunting” loosely, as a fair number of these themes are surprisingly upbeat considering the fact that they were written for horror films. But I suppose times were different back then. Maybe the grandeur of the cinema was such that they wanted sweeping scores as opposed to “spooky”.

Of course, certain sounds of the era are inescapable.

As with movies, most music tends to date itself, from the instruments used to the production values, to the overall “feel”. Within this collection, both “The Lost Continent Main Theme” and “Dracula AD 72 Main Theme” are very much products of the swinging 70s, filled to the brim with funky guitars, bongos, and blasting brass.

You’d actually be forgiven for mistaking “Dracula 72” for the theme song from F/X’s Archer. Yes, it’s THAT bongo-y.

Funky 70s vibes notwithstanding, there are a few truly great offerings here, and not just because they are featured in classic Hammer movies. 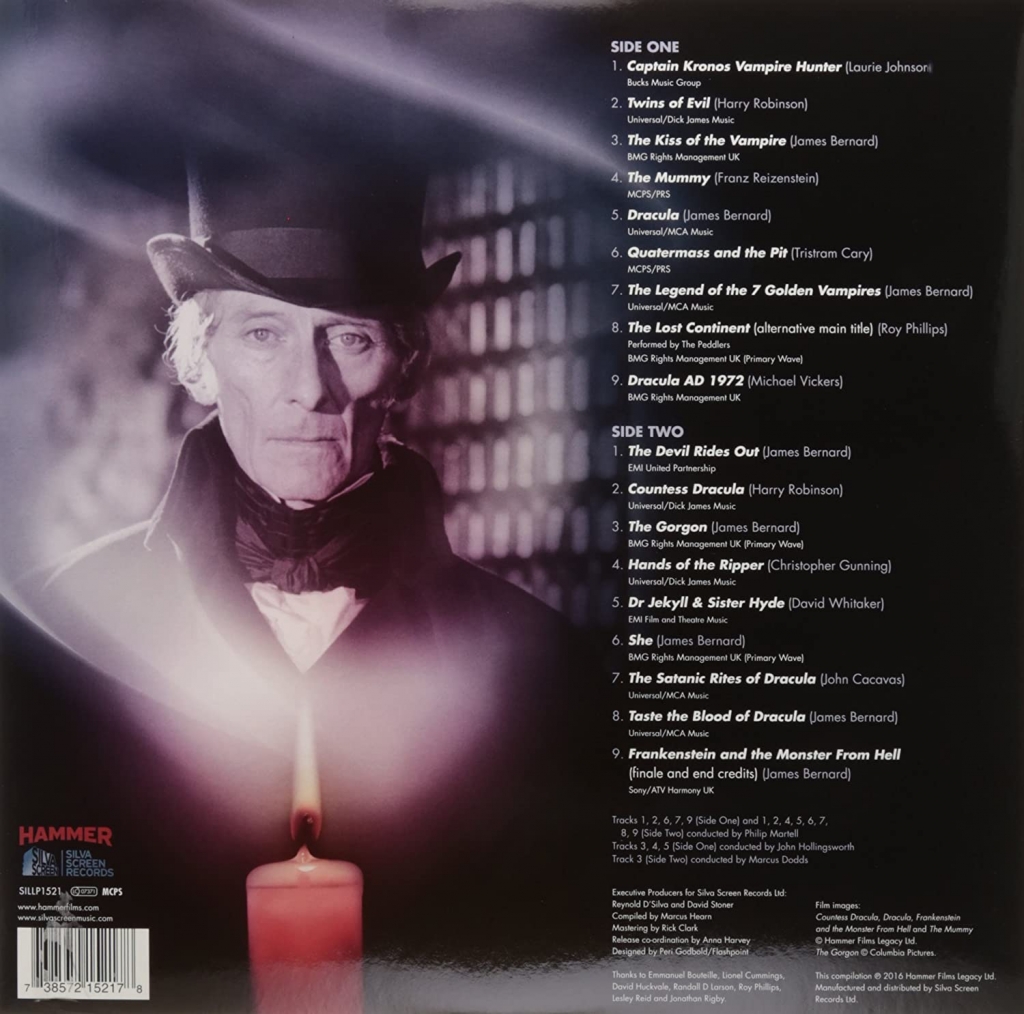 A handful of these themes are just well-conducted ditties; masterclass examples of ambiance and emotion.

One such offering is “Captain Kronos Vampire Hunter”, recorded in 1974 by Philip Martell (certainly the most prolific of Hammer’s composers). The film itself may not be at the top of anyone’s “favorite” lists, but the score is an absolute blast, effortlessly transporting the listener decades into the past. It was a great choice of opener for the collection.

Another standout is “Dracula Main Theme”, which is appropriately bombastic in all the right ways. Released in 1958, it is one of the most “horror” themed tracks in the collection and sounds suitably old-timey.

“Quatermass and the Pit” follows in Dracula’s footsteps, though it was released almost a decade later. It is very reminiscent of other scores released around that time period.

Given that the Quatermass series were more geared towards adventure than scares (think a dash of Indiana Jones and the Kingdom of the Crystal Skull, albeit far older), it’s a little strange that the theme is far spookier than most of the scores for the actual horror movies included here.

It’s not all doom & gloom with the Hammer Horror collection, however.

“Hands of the Ripper” features ethereal strings and woodwinds, sounding almost happy and carefree. “Dr. Jekyll and Sister Hyde” is another example, sounding more like an excerpt from some renowned composer’s magnum opus than a soundtrack for a spooky movie.

The music has a waltz-like quality, and it is one of the most accomplished scores on the album.

“The Satanic Rites of Dracula Main Theme”, from the 1973 movie of the same name, actually sounds more like the opening of a Bond film. It has that larger-than-life quality that just exudes “epic”. It also brings to mind Castlevania: Symphony of the Night at certain points, which can only ever be a good thing. Another solid win for Philip Martell.

Sadly, many of the rest of the themes fall a little flat without being tied to cinematography. Regardless of how well a soundtrack fits the movie itself, I always tend to take a critical look at whether said soundtrack can be listened to on its own.

Some examples of soundtracks that excel without visual accompaniment, for me at least, include Gladiator, Dune (2021), Battletech (Paradox Interactive), Last of the Mohicans, and Blade Runner 2042.

A few great selections notwithstanding, I can’t really count Hammer Horror as something I would return to again and again outside of specific moments or events (Halloween as a prime example). While the disc itself is lovely (that green is almost ectoplasmic), and the gatefold cover is both stocky and informative, the music contained therein is a little too scattershot.

It did say limited edition on the packaging, however, hence why I took the plunge and made the purchase. I’m a sucker for collector’s vinyl. And it must be said that it would be far less attractive as a standard black record.

Yes, there are some great themes here. But there are also just as many that, outside of their accompanying films, just fail to instill much more than passing interest. Not bad, not great. Undoubtedly interesting from a nostalgia perspective.

The collection is available on Spotify, for those interested in checking out the themes from some truly classic films.

As cool as this package is, I would honestly just recommend folks go and watch the movies that these themes were taken from. You’ll get the music while also enjoying some classics of the genre.