“It Came From Below” aims to delight creature feature fans with a tale about a group of friends hunted by a cave-dwelling entity.

IT CAME FROM BELOW landed on digital September 7th, 2021. Read on to find out if you should Rent it, Stream it, or Skip it.

It came from a small team that was swinging for the moon.

Is there any other movie genre that invites and accommodates amateur filmmakers quite the same way as horror does? A genre where tiny little productions with a shoestring budget can stand shoulder-to-shoulder with industry titans? Unlike action flicks, thrillers, or even adventure films, horror permits all sorts of low-cost creativity and guerilla flexibility, allowing nearly anyone with a camera and some Karo syrup to jump on the bandwagon.

Naturally, this no-holds-barred kind of freedom results in products with a wide range of quality. From efforts that are “so bad they’re bad” to truly game-changing gems that singlehandedly redefine the genre.

But between those two extremes is where the vast majority of independent horror films find themselves. That same lack of budget that inspires creativity also means that many ideas don’t get fleshed out in the most effective of ways. And that’s the uphill struggle that most indie features face. How to get their unique idea onto the screen in a meaningful way.

That struggle is very evident in It Came From Below.

It’s quite obvious that the creative team had some lofty ideas, and just did not quite have the means to realize them. 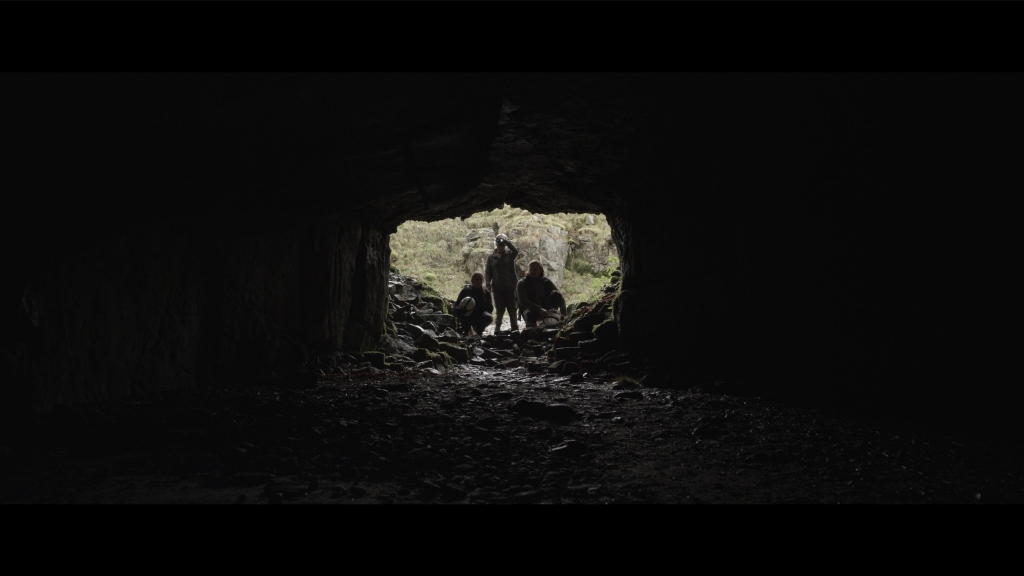 But that’s not to say it’s a bad offering.

There is a genuinely effective monster movie nestled within the limited trappings. The small cast and crew clearly put their hearts and souls into the making of It Came From Below, punching very much above their weight, which helps to elevate the movie above many of its peers.

The fact that also it comes across as a sort of Blair Witch/The Descent hybrid certainly doesn’t hurt either.

The IMDb synopsis says the following:

A group of friends finds themselves hunted down in the caves by a creature…from another world.

I love (note: sarcasm) how IMDb sometimes strips down a film’s concept into a nearly useless one-sentence info dump. For instance the mention of “the caves”. Like, which caves? Just any caves at all?

Unfortunately, the tiny tagline also gives away a conceit that would have been best left discovered by the viewer. Not that it’s necessarily a big twist or anything, but the concept of an alien creature as opposed to some ancient underground evil definitely helps give It Came From Below its own vibe.

And some of those vibes are quite unique. For instance, the ubiquitous “whispers in the woods” that so many creature features include. Due to the creature’s alien origin, those surreal sounds actually make a little more sense here, instead of just being a way to add tension.

Speaking of tension, there is some genuine atmosphere to be found in It Came From Below.

The isolated location itself is conducive to scares, as anyone who has done cave exploring can verify. From claustrophobia, shifting rocks, spooky echoes, and weird reflections, caves can be terrifying all on their own. Add in a creature from another planet and the gloves come right off.

It’s just a shame that the movie cannot quite capitalize on that inherently spooky atmosphere.

For being set in a cave off the beaten path, one which is most certainly not a tourist spot, the characters sure do quite a lot of upright running. And along smooth ground at that. Which would NOT be happening in any natural cave.

Again, it is understood that budget limitations, not to mention the difficulty of shooting in a perfectly dark environment, meant that not every shot could take place in a real cave. But this was just one of many little inconsistencies that helped to undermine the movie.

One of the other major gripes that I had with the movie is that, except for one single instance, not a single person in It Came From Below fights back when they are getting attacked. This is true even when some extraterrestrial beasty is snacking on their face. They all just kind of scream while standing and taking it.

Look, not every movie character needs to be a Deadite-murdering machine reminiscent of Ash from Evil Dead, but having characters just passively hang out while being eaten alive was a very strange (and very disappointing) directorial decision. And why do horror movie characters always explore forbidding environments with such shitty flashlights? Like, seriously. Why!?

But for all the things that the movie fumbles, there are just as many instances where it acquits itself.

The creature itself is actually kinda scary, even though it is essentially a man in a suit crawling over rough cave obstructions. But the design is alien enough to be creepy. Some of the noises that the creature makes are also effective.

For all its focus on traditional scares (jump or otherwise), It Came From Below also attempts to inject some actual philosophy into the proceedings. It serves as a very simple examination of what happens to people when you remove them from essentially every external stimulus. Put into such a dark and dangerous environment, where stillness and silence reign, the characters’ true selves come out. The cowardly. The selfish. The selfless. All of these traits come to the fore when everything else is stripped away.

The movie also tries to be an examination of the themes of loss and regret, a la The Ritual, though it lacks that movie’s gut-punch twists/reveals. Still, it’s more of an attempt than most movies make, especially little indie films. So I have to give credit where credit is due.

The performances are also generally well done. There are a few emotional moments in the movie, and the cast is largely up to the task of conveying their reactions appropriately.

The main character Jessie, played capably by Megan Purvis, has the lion’s share of screen time. She emotes very well, including real tears and real fear. But the rest of the main cast also do well with making their characters feel lived-in and real. From little rituals to goofy behavior, it’s clear that these people have history; some of it,