With Halloween on the horizon, now is a great time to check out the bloody great graphic novel version of the horror classic “Trick ‘r Treat”. 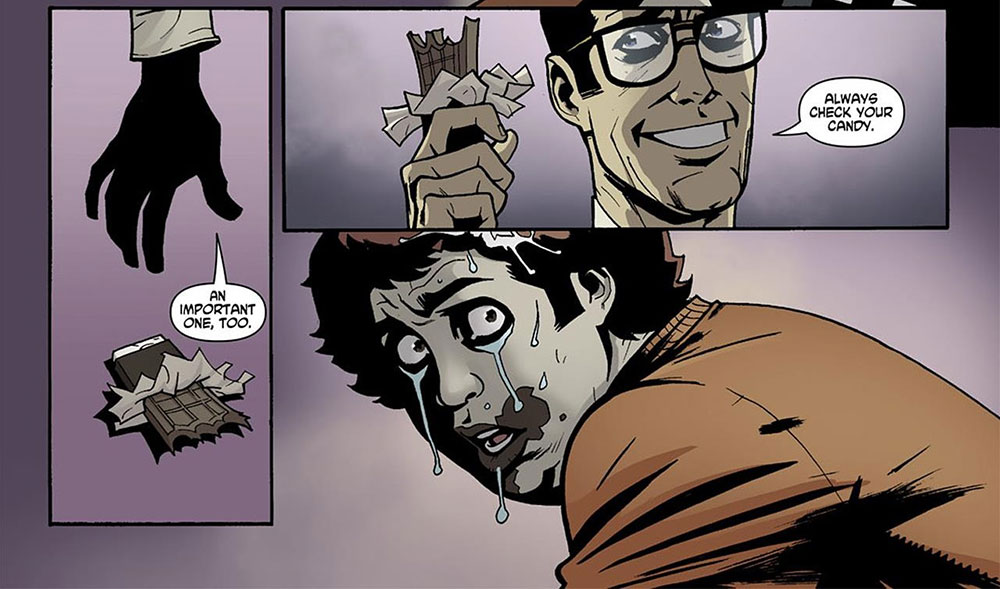 The other day, my son randomly brought up an odd question. He had asked who Sam was. Confused, I asked where he heard this person’s name from before, as I do not have any close friends who go by that specific name. This is when he informed me that he was speaking about the “kid with the pumpkin head”. I racked my brain for a moment, trying to figure out who this pumpkin-headed figure could be…and where he would have seen or heard of this before.

I’ve not seen Trick ‘R Treat since prior to his birth, so it did not occur to me that this is what he might be talking about. I first pulled out the Pumpkinhead DVD which sits within the horror collection on the shelf, but I was told that he was not the character we were looking for. This was when he walked away, pulled out a specific comic and showed me what he meant.

He was intrigued and, following my best explanation of the character to him, he advised me he wanted to watch the film. And so we did. Following this, he became obsessed with Sam and wanted to read the comics next. After completing the four issue mini series, I thought to myself, “This would be perfect for the Comic Book Spotlight.” So here we are! 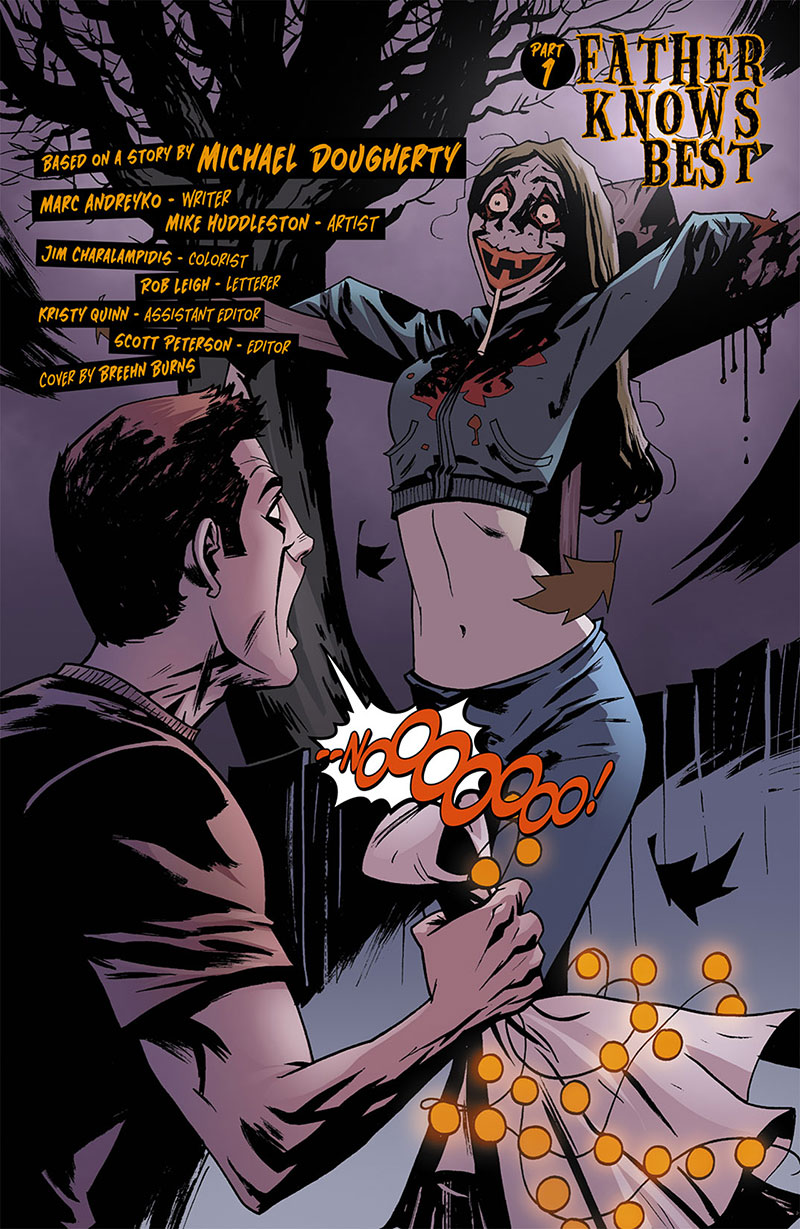 The comic is based on the 2007 anthology horror film of the same name, which was written and directed by Michael  Dougherty (Deadtime Stories, Krampus, Godzilla: King of Monsters) and essentially follows the movie almost identically part for part.

Knowing this, you may be reluctant to check out the comic — assuming you already know exactly what to expect. But think again!

The books display more violence and gore, switching things up in a slight manner in order to keep readers interested. And, since it is practically a carbon copy of the film, the dialogue is kept short to let readers fully take in the breathtaking visuals.

If you’re still unconvinced to read this specific series, there is also a sequel set of books entitled “Trick ‘R Treat: Days of the Dead”. This offers readers the same beautiful imagery, but you get an entirely new set of stories — this time, based around the history of Halloween night. 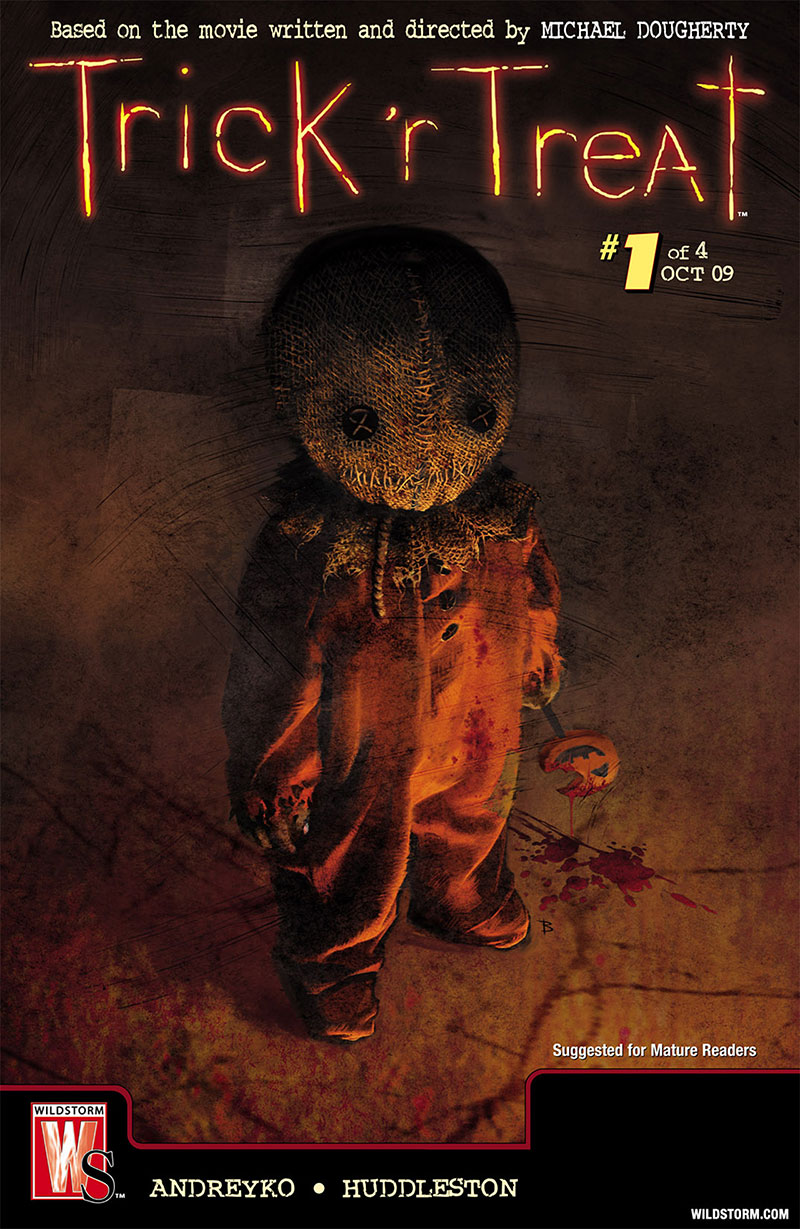 Here are a few great titles that were just released this week in the world of horror comics.

Batman’s been overseeing Gotham City for years now and isn’t sure how much of a difference he’s making. Doubt, fear and insecurity are starting to take over. And as all of those negative feelings set in the Scarecrow orchestrates a riot at Arkham Asylum to give the Dark Knight one of his greatest challenges yet!

This six-issue miniseries will see the Scarecrow in a horrifying new way that you’ll have to read to believe.

Psychological terror, the undead, and a supernaturally bitter cold come together in this spine-tingling new series from CULLEN BUNN (REGRESSION, Harrow County) and MARK TORRES (Zombies vs. Robots: Undercity).

10 years ago, Dan Kerr turned his back on his wife and unborn daughter. Now, both mother and child have gone missing, and Dan must face cosmic terrors to find them again. He soon finds that ghosts stir when his estranged daughter is near. And as the dead grow restless, the cold deepens…

YOU CAN TAKE THE PUNISHER OUT OF THE WAR MACHINE…

Punisher no longer has the War Machine armor, but he retained his newly acquired taste for big game, and he’s hungry for more. However, the paths to such perilous pursuits are fraught with dangers bigger than any Frank has faced before, and this lone wolf could use otherworldly help on his way up to the world stage.

MATTHEW ROSENBERG continues pushing the boundaries of the Punisher, and now joined by acclaimed artist RICCARDO BURCHIELLI (DMZ, Northlanders), this is the book Punisher fans will be talking about for years to come! Parental Advisory