Most Anticipated Horror/Sci Fi Films of 2017

Now that the stigma and depression of 2016 is in the past, it’s time to look towards what creepy goodness 2017 has in store for fear fans.

Now, we already know that the studios are pulling out all the stops throughout the year to earn your dollar. Warner Brothers, Universal, Disney, Lionsgate, Fox and the rest have an impressive slate of films ranging from dramatic fair, superhero movies (looking at you Marvel to keep your awesome track record in tact!), big budget action films, animated adventures, and raunchy comedies to name a few. Let’s take a look at what Horror and Sci-Fi films will be the talk of 2017 : 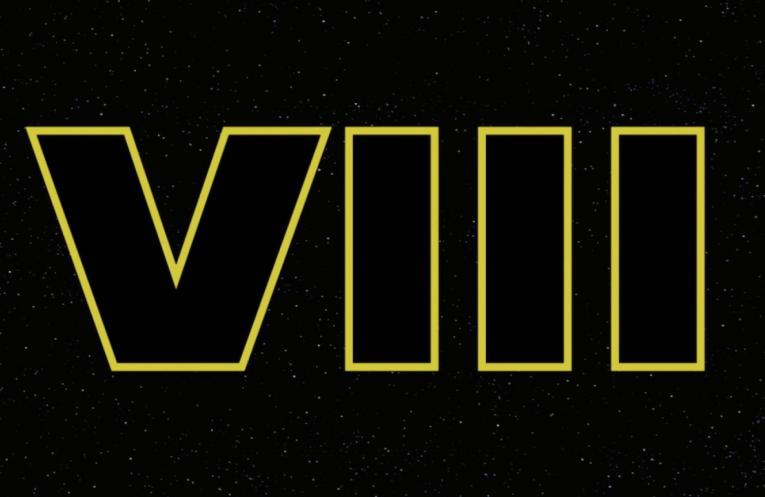 I’m pretty sure this goes without saying that Star Wars will absolutely dominate the box office this year. Fans have been eagerly anticipating the further adventures of Rey, Finn, Poe, BB8 and Kylo Ren. Details on the film’s plot have been extremely tight-lipped, with little nuggets of info coming from the filmmakers directly (Rey and Kylo’s training and Rey’s parentage being revealed). The film is reportedly darker in tone than The Force Awakens with some fans already comparing it to Empire Strikes Back. Sadly, this will be the final appearance of Carrie Fisher as General Leia Organa, who passed away in December. Fans will have one more time to see the iconic Leia in action this Christmas. (DECEMBER)

2. STEPHEN KING’S IT PART I 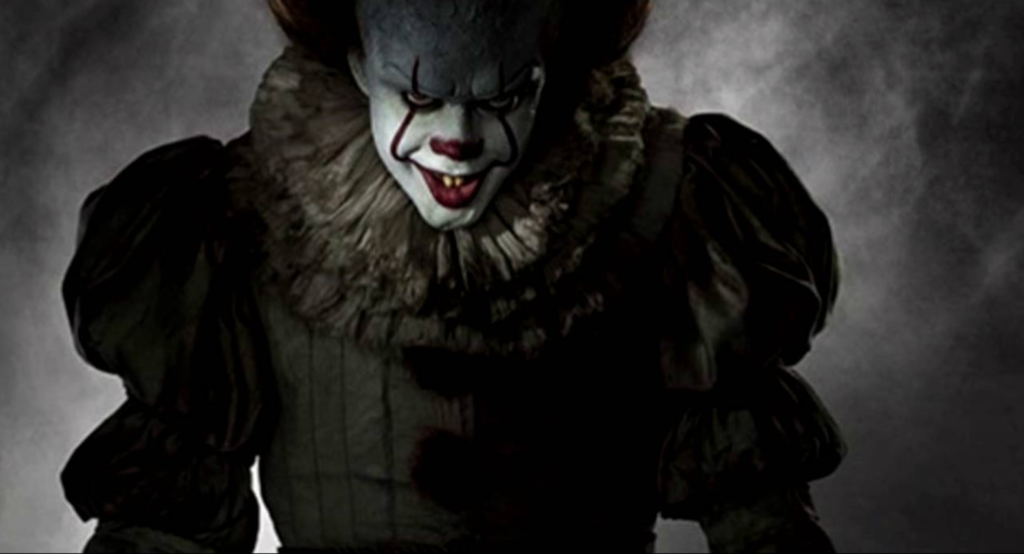 It’s no secret that most people have a fear of clowns. It’s also no secret that fear comes from those that watched ABC’s 2 part made for TV adaptation of Stephen King’s IT. Tim Curry was absolutely terrifying and hilarious as the evil Pennywise The Dancing Clown. Now 27 years later, Warner Bros and New Line Cinema are about to give coulrophobics nightmares all over again, as they are gearing up for a more faithful adaptation of the story. Word is, the filmmakers are sticking closer to the source material of King’s book. Bill Skarsgård is the new Pennywise and while most are a little leery on someone other than Curry filling his massive clown shoes for one of his most iconic roles (I’m looking at you Laverne Cox!), early word is that he is terrifying in the role. The R rated film will be split in to 2 parts, with the part 1 taking place in the 80s (as opposed to the novel’s late 50s setting). It will focus on The Losers as children and their fight to stop Pennywise from murdering more children. (SEPTEMBER) 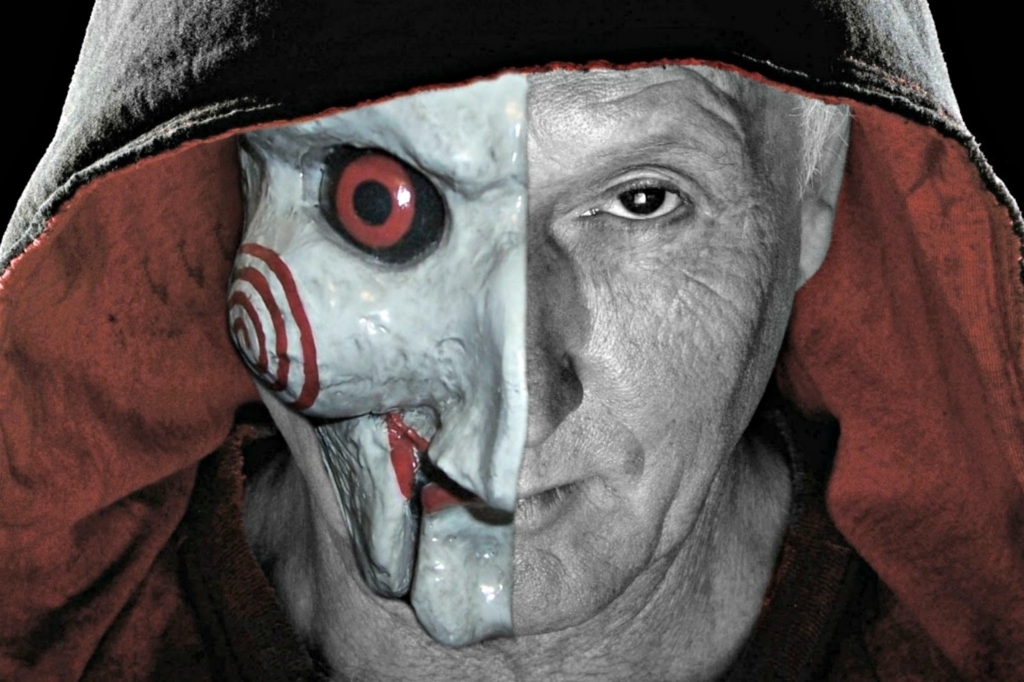 If it’s Halloween, It must be Saw. Lionsgate is resurrecting it’s big horror franchise that inspired countless imitations and coined the phrase “Torture Porn”. Despite being dead since the end of the 3rd film, the studio managed to make 4 more sequels involving John Kramer aka Jigsaw in some capacity. Now after 7 years of watching Paranormal Activity take its October crown, Saw is back with a vengeance! Plot details are nil at this point, as is the cast of the film. In fact the only known facts is the film is set to start filming shortly, it will be released in time for Halloween, it will feature Jigsaw’s signature traps and of course the trademark of the series…it’s huge twist at the end. (OCTOBER) 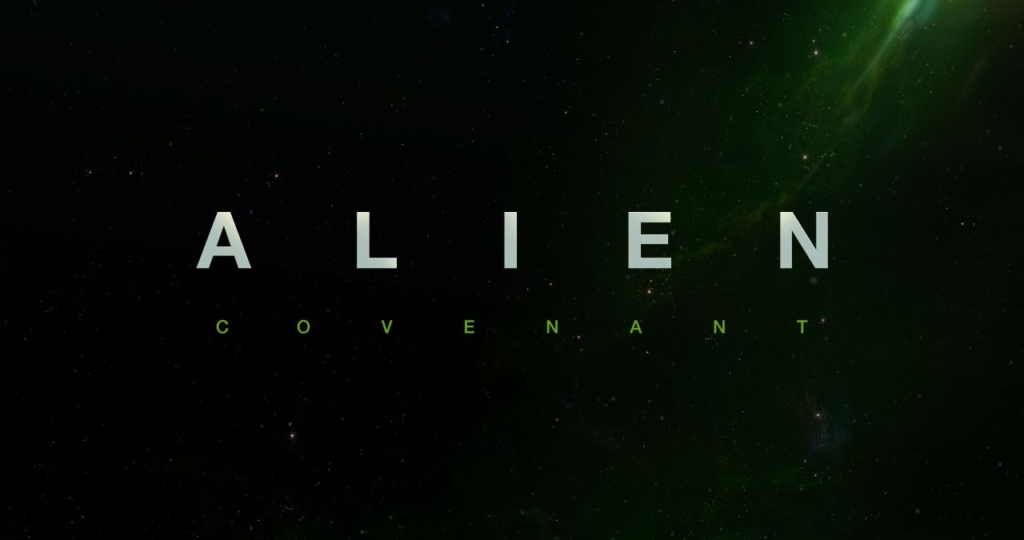 Alien fans are eagerly anticipating this film with hopes it will deliver where Alien 3, Alien Resurrection and Prometheus all failed…to recapture the magic of the 1st 2 films. Ridley Scott returns to the director’s chair of the franchise he started back in 1979. The film is a sequel to Prometheus and the 2nd film in the Alien prequels. The official plot is as follows: Bound for a remote planet on the far side of the galaxy, the crew of the colony ship Covenant find what they believe to be an uncharted paradise. What the crew discover is a dark, dangerous world, inhabited by the “synthetic” David (the returning Michael Fassbender), the sole survivor of the doomed Prometheus expedition, and monstrous creatures that are hunting them. (MAY)

Marvel took a huge gamble 3 years ago when they released a film about a ragtag group of misfits who weren’t as universally known or beloved as Iron Man, Thor, Hulk or Captain America. Well, after grossing $770 million worldwide, the biggest A Holes in the Galaxy are back for another galactic adventure that will introduce a new member to to group (Mantis) as well as bring Kurt Russell and Sylvester Stallone into the mix. Plot details haven’t been released yet, but the one question that has been burning fans is what can we expect to be on Awesome Mix 2? Don’t forget that Marvel will have 2 tags during and after the credits. (MAY)

Comedian Jordan Peele, of Key & Peele, goes dark and scary with his directorial debut from a script he also wrote. The plot revolves around a young African-American man going to meet his Caucasian girlfriend’s parents for the weekend. Things begin to go horribly wrong, as the young man discovers some horrifying secrets about his girlfriend’s family. Early word is this will be the first sleeper of hit of 2017, as the film is garnering rave reviews from the film festivals where it has been featured. (FEBRUARY)

7. THE CURE FOR WELLNESS 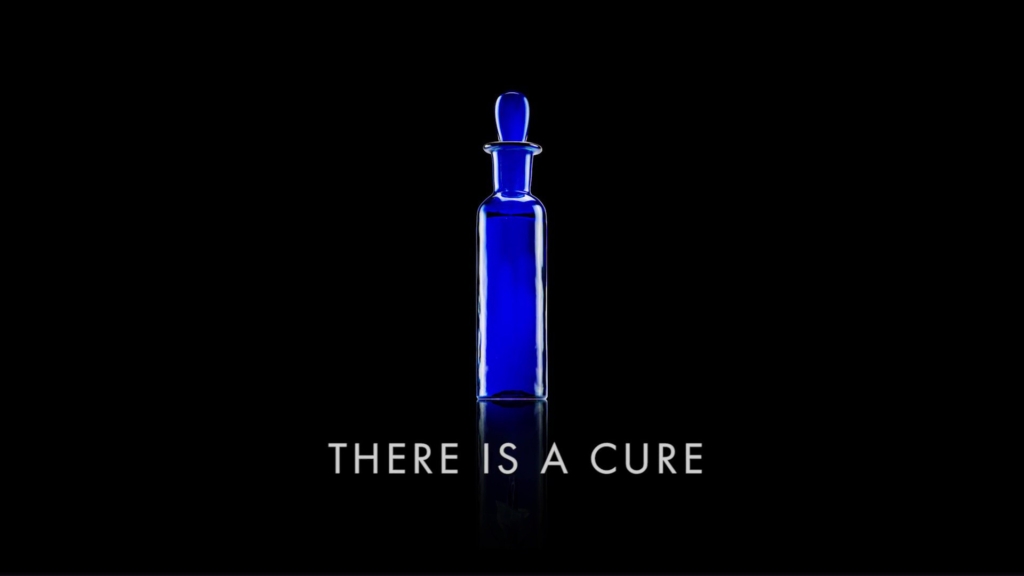 Director Gore Verbinski returns to psychological horror with The Cure For Wellness. An ambitious young executive is sent to retrieve his company’s CEO from an idyllic but mysterious “wellness center” at a remote location in the Swiss Alps. He soon suspects that the spa’s miraculous treatments are not what they seem. When he begins to unravel its terrifying secrets, his sanity is tested, as he finds himself diagnosed with the same curious illness that keeps all the guests here longing for the cure. (FEBRUARY) 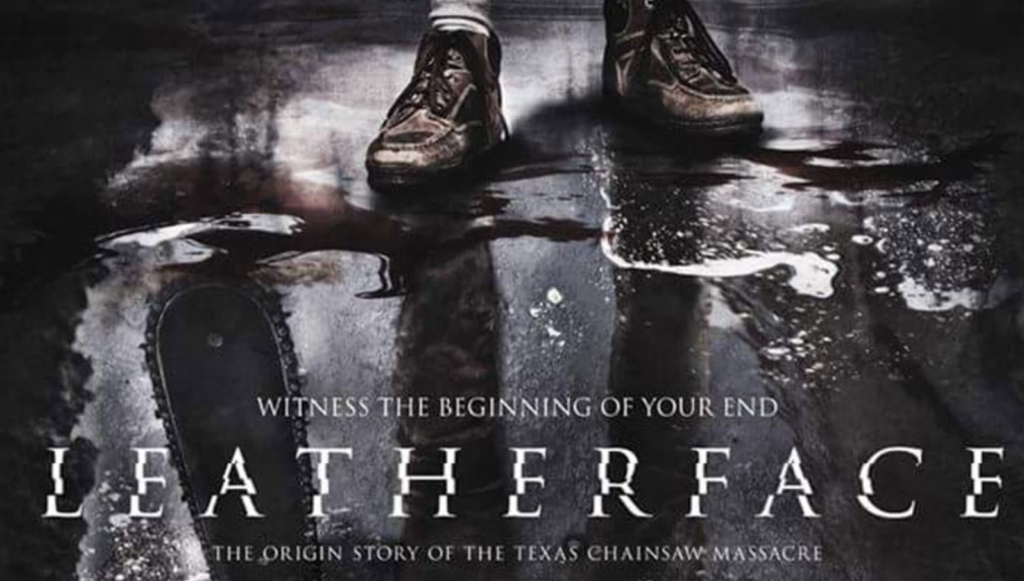 Texas Chainsaw fans have long wondered about the origins of the cannibalistic killer Leatherface, should have their questions answered with this film. Now it is worth noting that there was a prequel to the 2003 remake explaining this, however many fans were disappointed that it only followed the remake’s universe, thus not considered canon with Tobe Hooper’s films. The film centers on 3 teenage psychopaths that escape a mental institution with a young nurse as their hostage. One of the 3 boys will eventually grow up to be the villainous Leatherface. The film has been completed, and is awaiting a final release date. TBA

9. WAR FOR THE PLANET OF THE APES 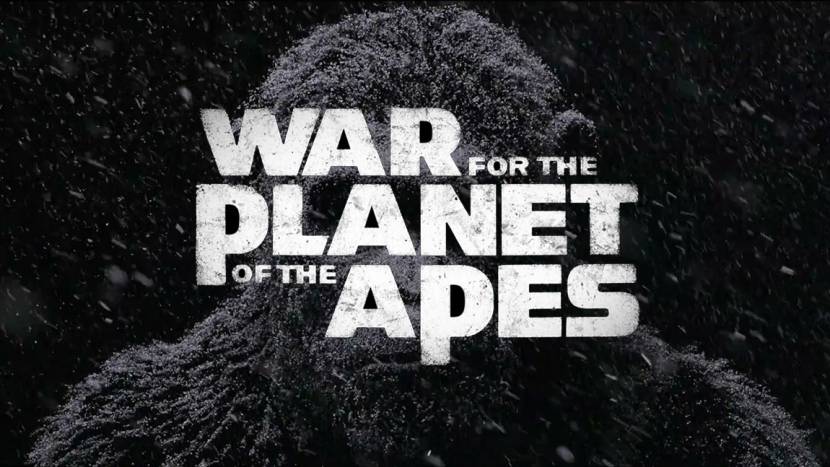 A few years ago, director Matt Reeves set out to remake the sci fi classic Planet of the Apes and erase the Tim Burton version from our collective memories. Not only did he succeed, he also crafted an even greater sequel in Dawn of the Planet of the Apes. Now he is back with what looks to be the most thrilling chapter in his Apes franchise. Woody Harrelson joins the series as the sadistic Colonel who goes head to head with Ceaser, leader of the Apes, once again voiced and motion captured by the amazing Andy Serkis. (JULY) 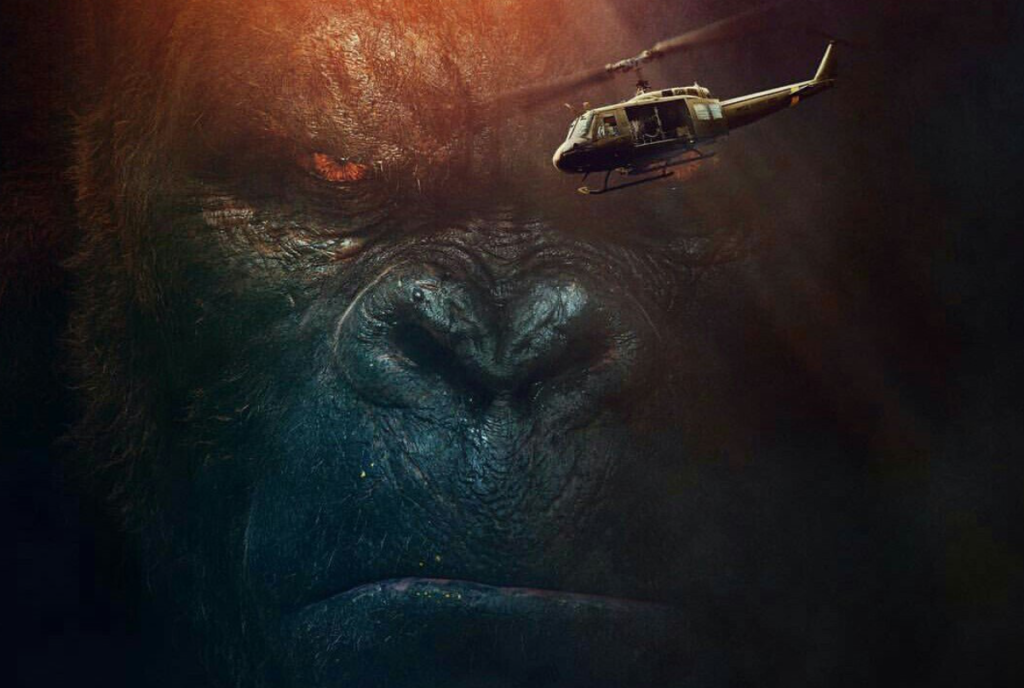 King Kong returns to theaters this year with a new adventure that takes place on his turf…Skull Island. In the 1970s, a team of explorers and soldiers are brought together to venture deep into an uncharted island in the Indian Ocean – as beautiful as it is treacherous – unaware that they are crossing into the domain of monsters, as well as the mythic Kong, the “king” of the island. The film stars Tom Hiddleston, John Goodman, Academy Award Winner Brie Larson, Corey Hawkins, John C. Reilly and the incomparable Samuel L. Jackson. This will be the biggest Kong to grace the silver screen, as he will also be closer to his 1933 version, as opposed to Peter Jackson’s (and equally excellent) 2005 version. As if that weren’t enough to get people excited, this version of Kong lives in a shared universe with the new Godzilla that will eventually set up the biggest monster mash in history…Kong vs. Godzilla for 2020. (MARCH) 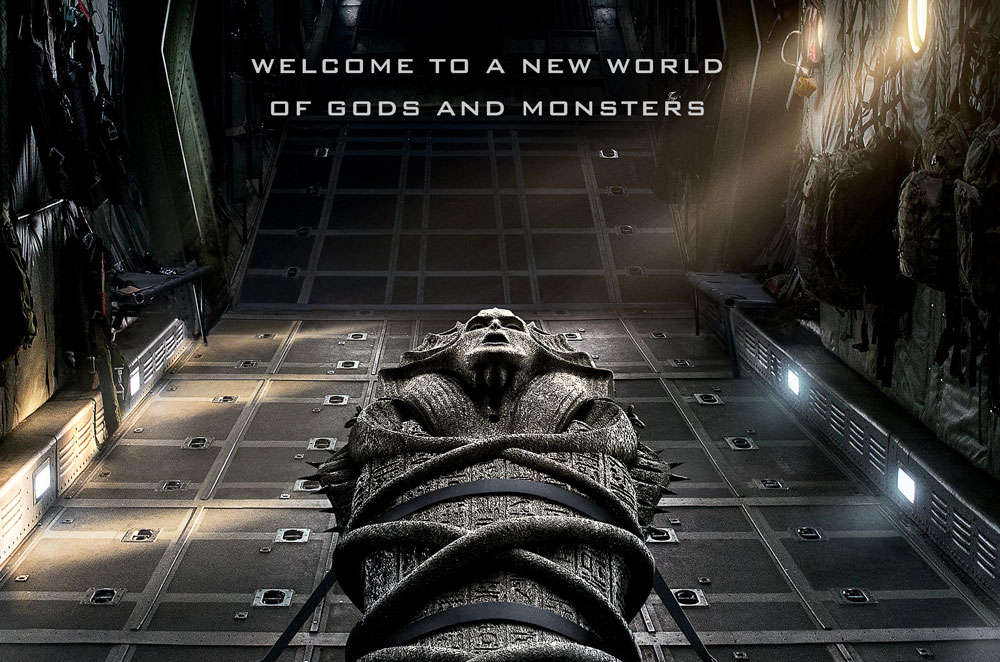 Universal Pictures announced that they were rebooting their famed Universal Monsters for modern audiences. It was also announced that the monsters were going to exist in a “shared universe”(Marvel really started something with shared universes huh?) and all connecting to each other. The Mummy will be the first in this series and it boasts quite a cast. Tom Cruise will be going toe to toe with titular character, played by Sofia Boutella, in modern times. The film also stars Annabelle Wallis, Courtney B. Vance, Jake Johnson, and Russell Crowe as Dr. Henry Jekyll (yes, THAT Dr. Jekyll). Expect some sort of tag during or after the credits. (JUNE) 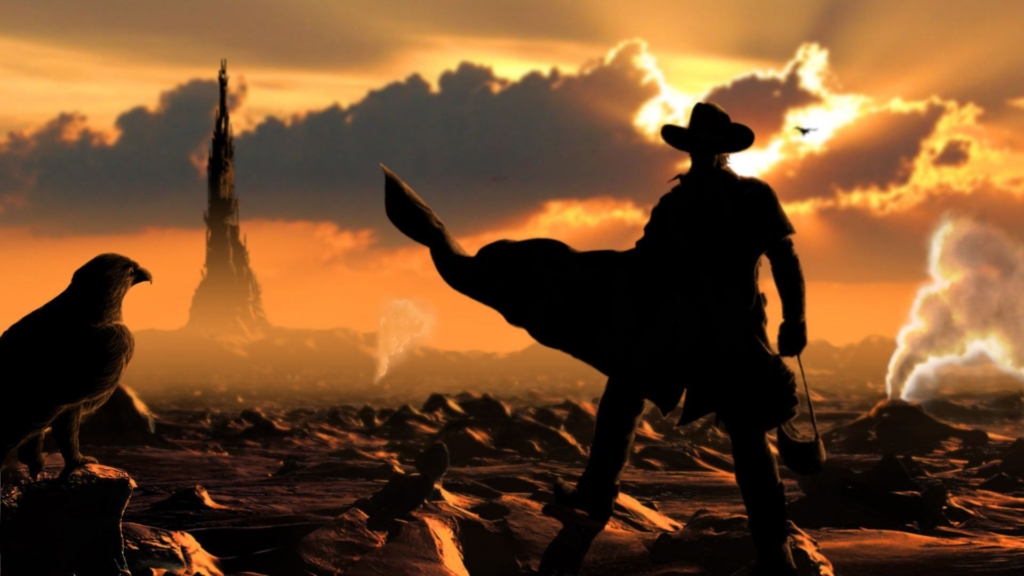 After years of being in development hell, “The Dark Tower” looks to finally be heading to the silver screen this year. It is not a typical adaptation in the sense that it’s following the source material, it is being said it is a sequel to King’s books and will be an adventure-horror movie about an 11 year old boy who embarks on a quest to Mid-World and encounters many grave dangers as he helps Roland Deschain reach End-World. Tom Taylor, Idris Elba and Matthew McConaughey star in the film. (JULY) 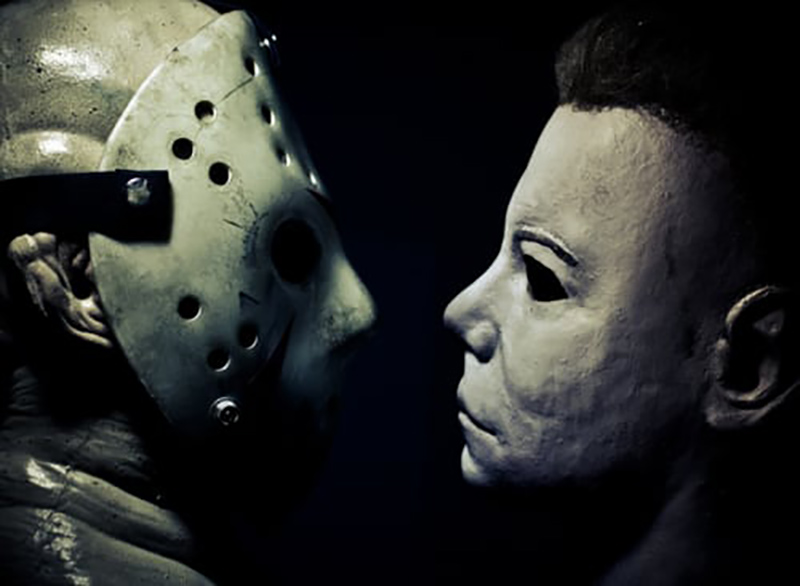 Ok, so we’ve been hearing that The Shape and Jason Voorhees were returning to theaters for the past 3 years now and neither has happened yet. The studios for both franchises promise this the year that we are getting a new movie for both slasher icons. With the news that John Carpenter is returning to the Myers saga once again to produce and score the film, along with genre favorites Blumhouse who will handle distribution of the film, there is a sliver of hope for Halloween to be on the screen this year. On the flip said everyone’s favorite Mama’s Boy is having a little tougher of a time getting back to his gory glory. It seems there is a well known court case going on over the rights of the film franchise and all that is known for sure os Breck Eisen will handle directing duties, a script has been completed for a while now and it will NOT be a found footage film. In regards to both, don’t hold your breath kids. Wait until at least an official teaser poster (at the very least) hits the web for either film. (TBA)

It seems that Hollywood has not had their fill riding the remake train yet, as cult horror favorite Maniac Cop will be remade for a new audience of horror fans. No casting has been announced, however the film is slated to begin filming soon in New York City. Drive’s Nicolas Wending Refn will serve as a producer, so  expect a slick, sleek, colorful, gore noir horror film. (OCTOBER) 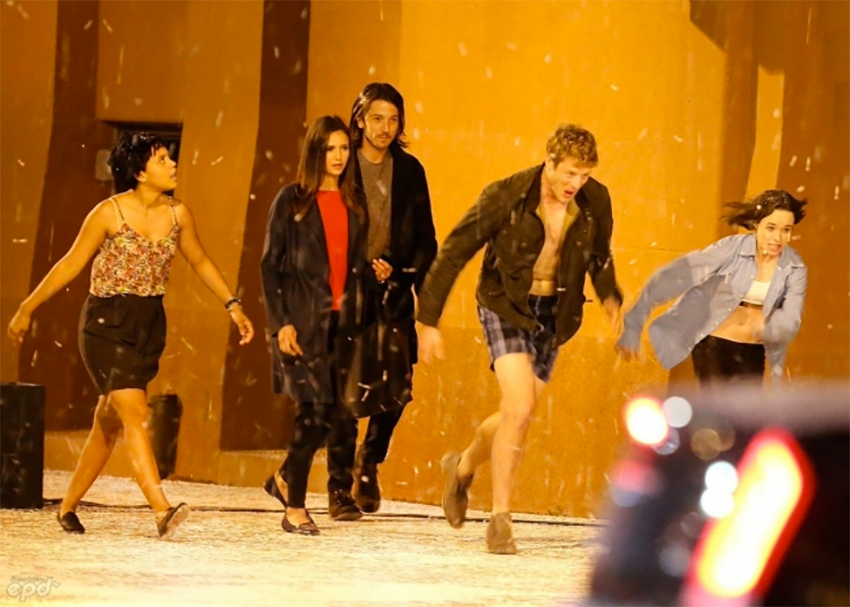 Speaking of remakes, Juno‘s Ellen Page and The Vampire Diaries‘ Nina Dobrev take the leads in this new take on the 1990 film that starred Kiefer Sutherland, Julia Roberts, and Kevin Bacon. The film is about medical students that discover there is life after death and it may be more dangerous than they had anticipated. (SEPTEMBER)

Did I miss your most anticipated genre film of 2017? Sound off in the comments below.