“How do you run from what’s inside your head?” – Alice in Wonderland 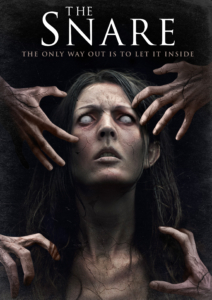 The Snare is the feature film debut of British filmmaker C.A. Cooper. I knew very little going into this viewing, aside from the brief IMDB synopsis that belied how layered and complex this tale of terror really is. In fact, this was one of the most unsettling, deeply disturbing, and truly haunting films I’ve seen.

The film opens with a powerfully disturbing shot of a decaying white rabbit, coupled with a haunting soundtrack that immediately crawls under your skin and sets the tone for the nightmarish trip down the proverbial rabbit hole for our characters, especially the appropriately named Alice (Eaoifa Forward).

Immediately after, we meet our Alice, and it’s clear something’s not quite right. Told mostly through brilliant body language and facial expressions rather than dialogue or exposition, we sense she’s a girl with a troubled past and a heavy heart. A brief but telling encounter with her father is unnerving, and it whispers of darker revelations to come.

Alice accompanies her carefree best friend Lizzy (Rachel Warren) and her highly unlikable boyfriend Carl (Dan Paton) on a weekend getaway to a seaside apartment complex. The vacation property, managed by Lizzy’s real estate father, is currently closed for the season. Lizzy manages to heist the keys without her father’s knowledge.

Unfortunately for the trio, they end up trapped in one of the high-floor apartments with no way of escape, rapidly diminishing supplies, and no way to contact the outside world. No one knows they are there, and hope for rescue quickly dissipates as things go from bad to worse for the young friends.

If this was just a film about the very real terror of being isolated and trapped without food and water, it would be harrowing enough. It was gut-wrenching watching the fear and desperation grow as the situation became more and more dire…and survival became less and less probable. All three actors did an extraordinary job selling the anguish and suffering, the feeling of hopelessness, and the total breakdown of their physical as well as their mental states.

IMDB describes the rather brutal and intense tactics Cooper supposedly used during filming to elicit more authentic performances from his actors. While it sounds like a punishing film to make, it’s hard to argue with the results. This is an incredibly uncomfortable film to watch, in large part by how well these actors sell the agony of their characters’ predicament.

On top of this intense survival horror, Cooper layers on a menacing supernatural aspect. As the harsh reality of their situation sinks in, the friends begin to question who — or what — may be behind their imprisonment. The vulnerable and emotionally fragile Alice becomes the primary target of what appears to be a malevolent force, haunting her nightmares and making her question what’s real and what’s just in her troubled mind.

Therein lies the third layer of horror, as Alice’s psychological trauma begins to come into sharper view, and we as the viewers can no longer trust anything we see or think we know. We see all the supernatural horror through Alice’s eyes, as she alone experiences the terrifying visions — such as, sinister old ladies, creepy kids, and foreboding visions of death. But she’s an unreliable narrator, as we’re never quite sure just how far down the rabbit hole she’s fallen.

This is a truly frightening film in many ways, with some brilliantly disturbing visuals and gruesomely realistic special effects. There’s even a surprisingly effective jump scare towards the end of the film I quite enjoyed. But the most unsettling and almost impossible to watch scenes are the ones that focus on real life horror…man’s inhumanity to man.

There are themes of abuse, sexual and mental, that permeate this film and give it a much more menacing subtext. It reminded me a great deal of films like The Babadook, where supernatural evil becomes a metaphor for psychological damage and suffering; where the greatest horrors are the ones that live inside our minds.

I absolutely loved this film, but not everyone will share my enthusiasm.

This is not a simple or straightforward horror flick, and its intentional ambiguity is likely to turn off many viewers. Like another film that deeply divided audiences, The Witch, this is a slow burning and highly artistic film that may alienate those with more mainstream horror sensibilities.

Most importantly, it’s a fearless film that goes to some very dark places that some may find too much to stomach. There’s plenty of traditional horror elements like blood and gore (all very well done), but there’s also some scenes which focus on human depravity that were extremely difficult to watch.

However, if you like boundary-pushing films that challenge you, make you think and linger long after the closing credits, I highly recommend you give this one a watch.

The Snare will be available for viewing on demand beginning January 6th, with a very limited theatrical release in select US theaters on January 13th.