Prepare to be demon possessed by the Arrow Films Blu-ray release of the 90s winter slasher/possession indie horror film, THE CHILL FACTOR. 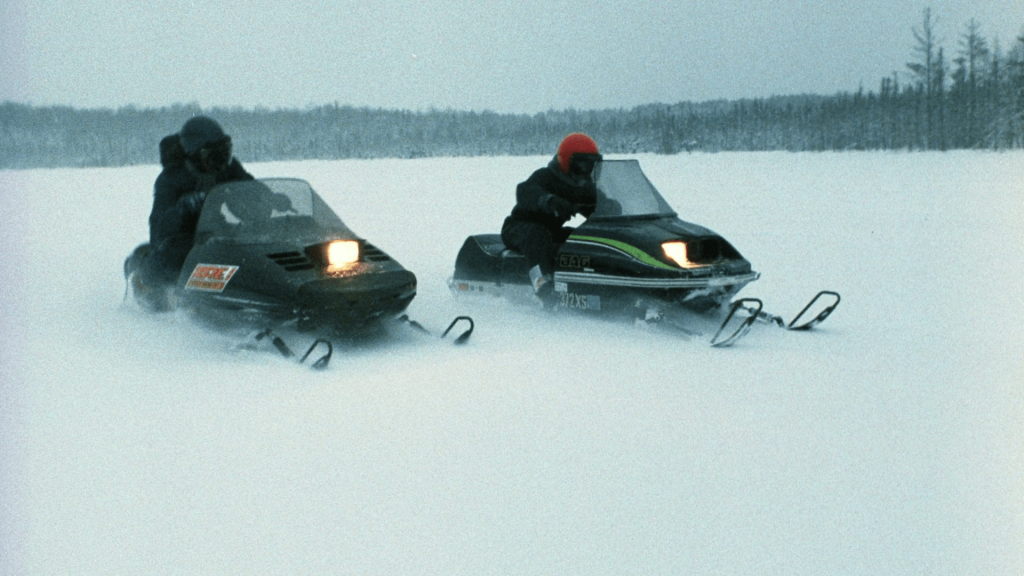 THE CHILL FACTOR (aka DEMON POSSESSED) is a movie I wanted to embrace whole heartedly. The first and only scene I saw before watching the movie was a snowmobile and its driver being crushed by a larger snow vehicle. Watching the helmet and head pop under the pressure from the large treads, I was eager to catch this early 1990s horror flick and hoping my expectations weren’t too high.

A group of college-aged friends are hitting the snowmobile trails in wintery Wisconsin. When one in the group, Tom (Aaron Kjenaas), suffers a head injury in a snowmobile accident, his friends rush him to an abandoned church camp that is nearby. One of the friends, Ron (Jim Cagle), heads out on his snowmobile to seek help from the closest town, which is 30 miles away.

When Tom is stabilized and sleeping at the camp, the remaining friends find a witch board that looks like an evil spinner from a game of Twister. Using the witch board unleashes a demon from within the abandoned camp, and it immediately possesses the injured Tom. Now healed from his accident, evil Tom begins to torment and kill his friends while seducing his buxom girlfriend Jeannie (Dawn Laurrie). 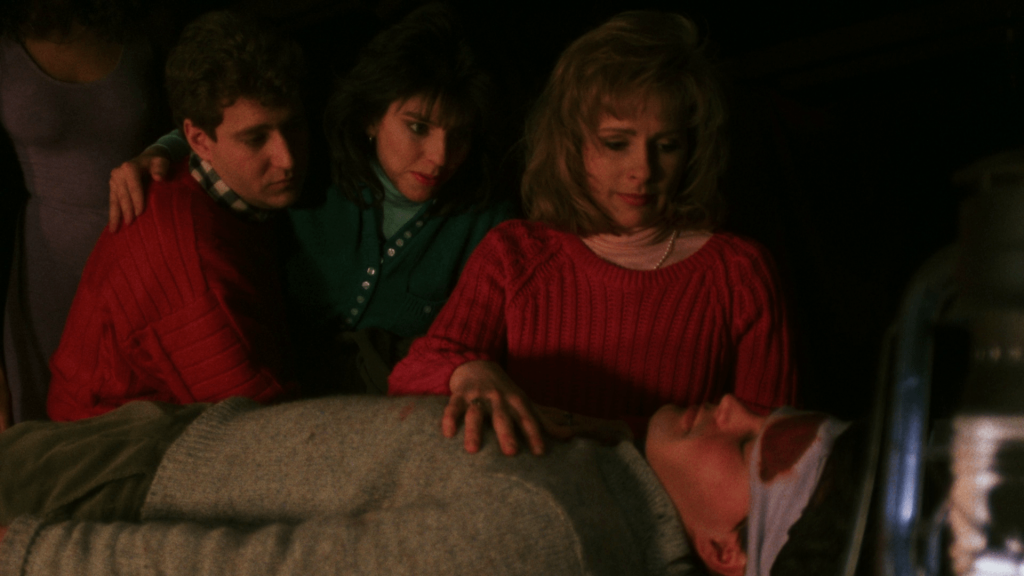 THE CHILL FACTOR is one of three movies produced by Windsor Lake Studio in Wisconsin at approximately the same time. Directed by the producer of HELLRAISER and HELLRAISER II, Christopher Webster, THE CHILL FACTOR tries to be a mix of a snowbound slasher film and a demonic fright flick in the vein of THE EVIL DEAD or NIGHT OF THE DEMONS. Webster and screenwriter Julian Weaver fail on both accounts.

On one hand, Webster and Weaver seem to throw every trope at the wall and hope something sticks. But storylines like racist barflies and an incest plot between Tom and his sister Karen (Connie Snyder) never pay off in any meaningful way. The story is overstuffed with attempts at different plots, and the attempts to elevate the movie beyond a demon possessing blood fest causes the movie to drag in the first half.

Webster teases a more extreme movie than we ever get. 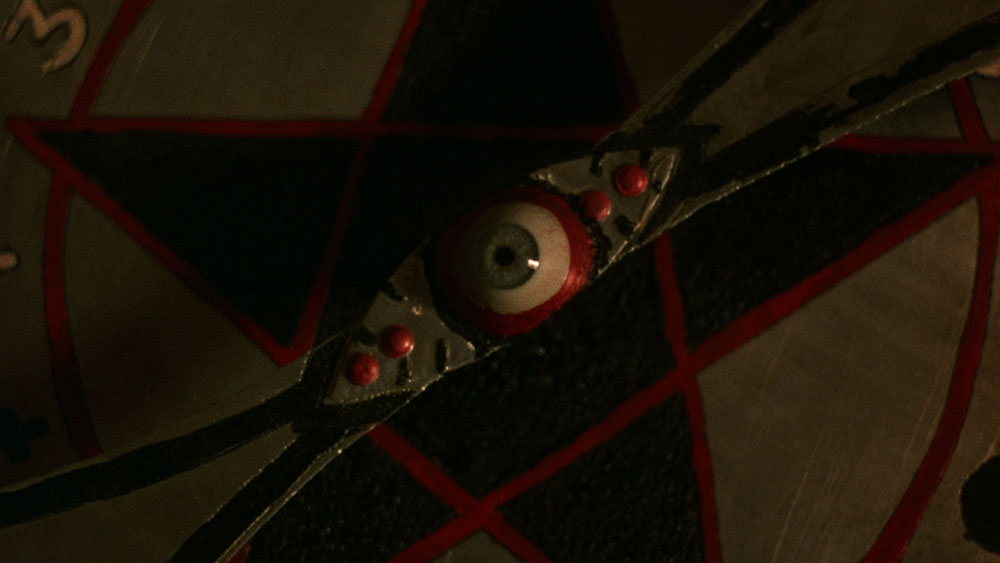 There’s hints of nudity and some blood, but not enough of either to satisfy the promise of THE CHILL FACTOR in its marketing, which sets you up for an experience that’s vastly different than what the movie ultimately delivers. If this movie were made in today’s climate, fans would accuse the director and producers of trying to maintain a PG-13 rating.

It’s not all bad though; the second half of the movie does show the promise of what might have been. Aaron Kjenaas’ Tom is a bore at the start of the movie. To say his acting is wooden would be an insult to trees. But once Tom is possessed by the demon, Kjenaas impresses. He embraces the evil characteristics and with minimal makeup conveys to the audience that Tom is gone and replaced by a villainous and libidinous demon.

Makeup and special effects were coordinated by Jeff Segal (who worked on RE-ANIMATOR) and Hank Carlson (a Wisconsin local getting his start in the business). Their work on THE CHILL FACTOR stands out in the few special effects and kill scenes in the movie. 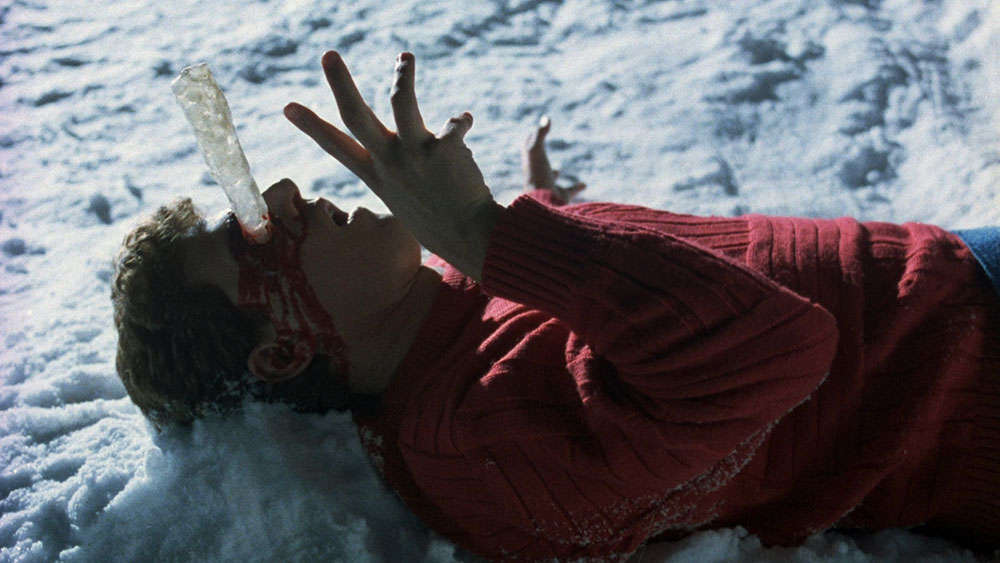 Especially impressive is the icicle through the eye gag, which is a gag that had not been done before, to the best of Segal or Carlson’s knowledge.

In an interview with Carlson in the bonus features on the disc, he admits that icicle accidents did happen in the Wisconsin winters.

Unfortunately, the special effects and Kjenaas demonic performance aren’t enough to save THE CHILL FACTOR. It’s a solid movie that spends too much of its time trying to figure out what kind of movie it wants to be and focuses way too much on snowmobile riding. I readily admit that I may be judging the movie more harshly than I might if it hadn’t been made by the producer of the first two HELLRAISER movies. I expected more from Webster in his only directorial credit. 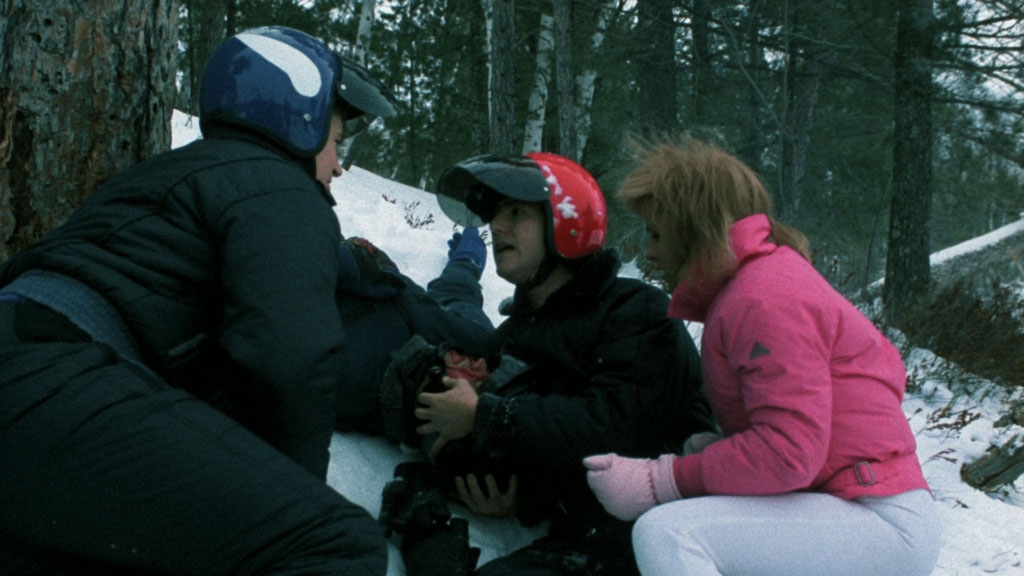 The VHS workprint is a completed cut of the movie but before a score was added and before ADR was done. The workprint, to the surprise of Hank Carlson, is titled THE CHILL FACTOR, not the rebranded name of DEMON POSSESSED from the distribution company AIP.

There are three interviews on the disc. 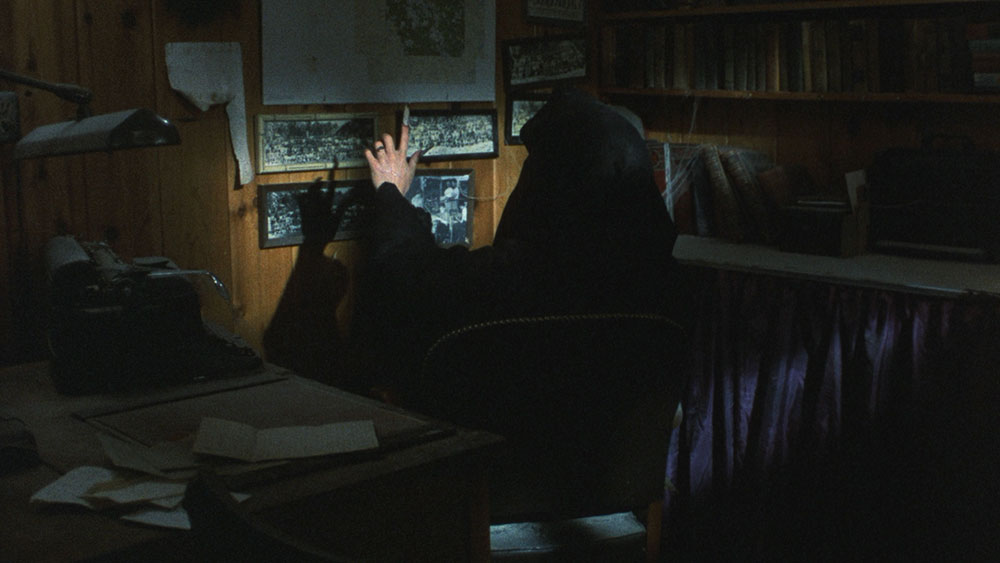 The interview with the production manager Alexandra Reed goes into most detail about the actual making of THE CHILL FACTOR. Interviews with Jeff Segal and stunt coordinator Gary Paul touch on THE CHILL FACTOR but also on their career in movies and other subjects.

The one audio commentary track is with Hank Carlson and horror writer Josh Hadley. They spend a considerable amount of time trashing AIP for their marketing of THE CHILL FACTOR as DEMON POSSESSED, and Hadley couches his critiques of the movie with statements like, “I’m not trying to bash the movie, but…”

While Hadley does provide a crew member’s unique insight into making a low-budget indie horror movie in Wisconsin, he actively avoids questions about decisions made about the story. When Hadley doesn’t have an answer, doesn’t want to reveal and answer, or give an opinion on a director and/or writer’s choice, he would say something to the effect of, “I don’t know, they ask me to stick an icicle in a guy’s eye and that’s what I do.”

The lack of insight into some of the story decisions highlights the need for some input from some of the cast, Webster, or the screenwriter. 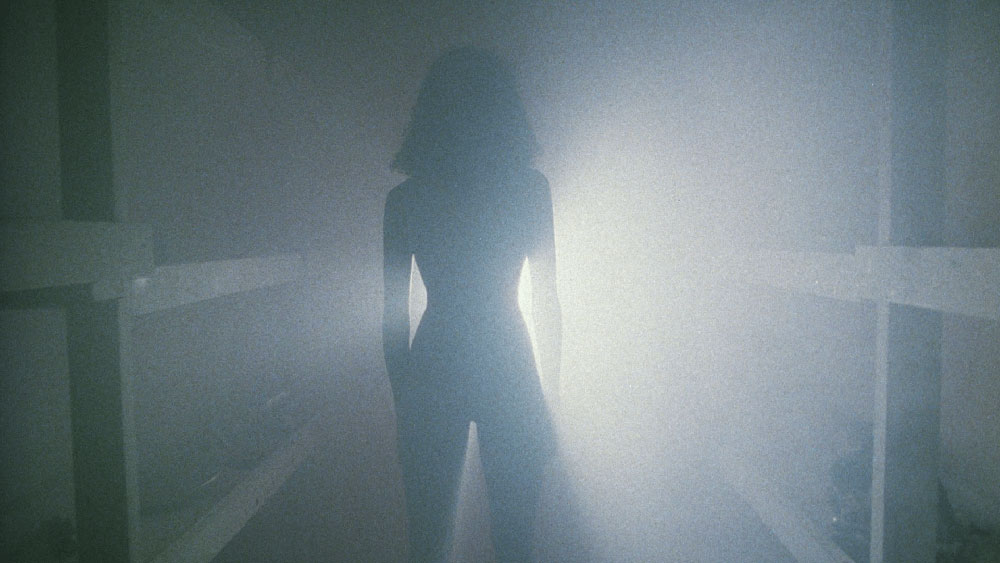 The disc provides some interesting past history by including the VHS workprint and production stills. The interviews and commentary provide some insight, but the disc would have made a better impression with interviews or commentary from the cast, writer, and/or the director. Without their input, the disc’s bonus features are left with a gaping hole of information.