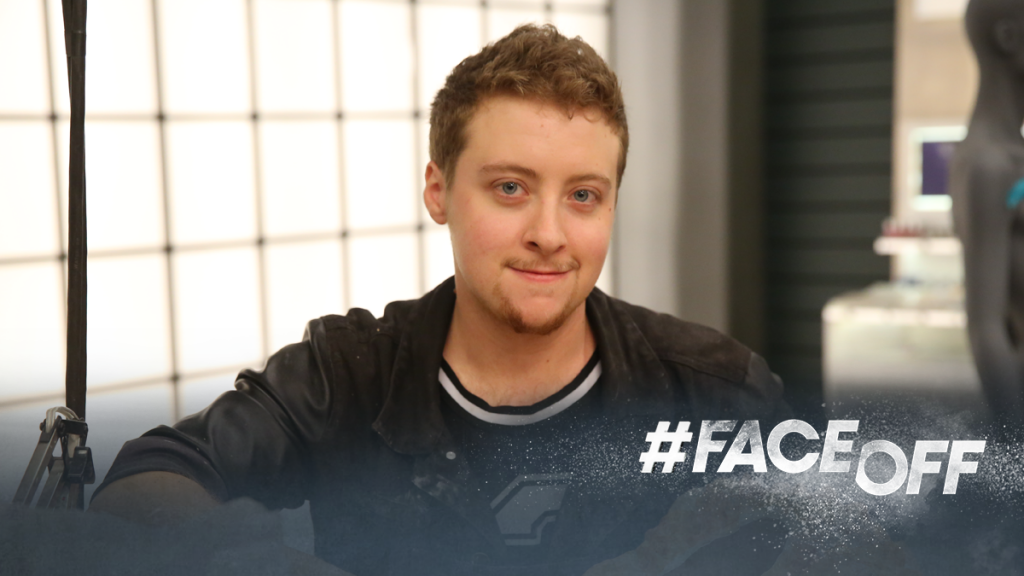 Every single one of us Spooky Kids has a Creature origin story. Mine is Stuart Gordon’s From Beyond (1986) and the recently passed Titan, John Carl Buechler’s work on Doctor Pretorius. I remember being four or five years old and running up the stairs to escape that protruding pineal gland — but getting halfway up and creeping back down to catch another peak. I’ve been chasing that fear dragon ever since.

So, what happens when you, yourself are one of those wonderful, life changing humans that create those Monsters and Beasts? Nothing different. You find inspiration in the same mad men creators that us “fans” do. 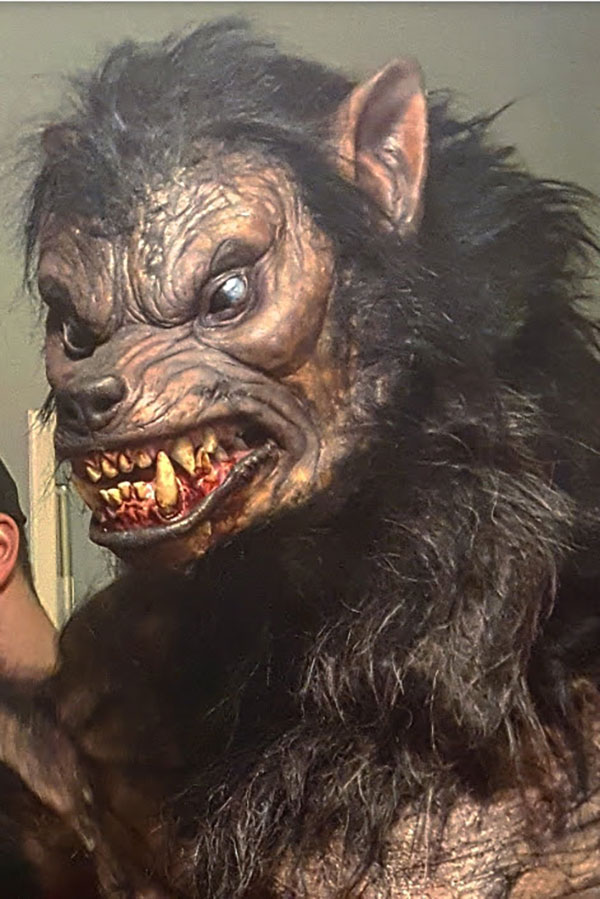 “I grew up in Duanesburg, NY. Basically, in the middle of the woods. I didn’t have many electronics and only a couple of TV channels so as a kid I had a creek and exploring, that was how I spent my time. My Mom was a Hippie and really pushed nature, so I had gotten an animal encyclopedia and started creating and thinking up my own animals. How they’d look, what they would do. I loved it. I remember she let us watch the Universal Monsters, and I fell in love with “The Wolf Man”. I actually wanted to be a Werewolf as a kid.”

A viewing of John Landis’s An American Werewolf in London would cement Ricky’s affinity for Lycanthropy.

“Every year for Halloween I would dress up as a Werewolf. I’d make my own costumes, gluing hair and doing face paint, but that wasn’t really the beginning of my fascination with creating costumes or make up.”

Ricky recalls catching one of the original “Planet of the Apes” series films on TV, and finally having the revelation that he could do make ups just like that. 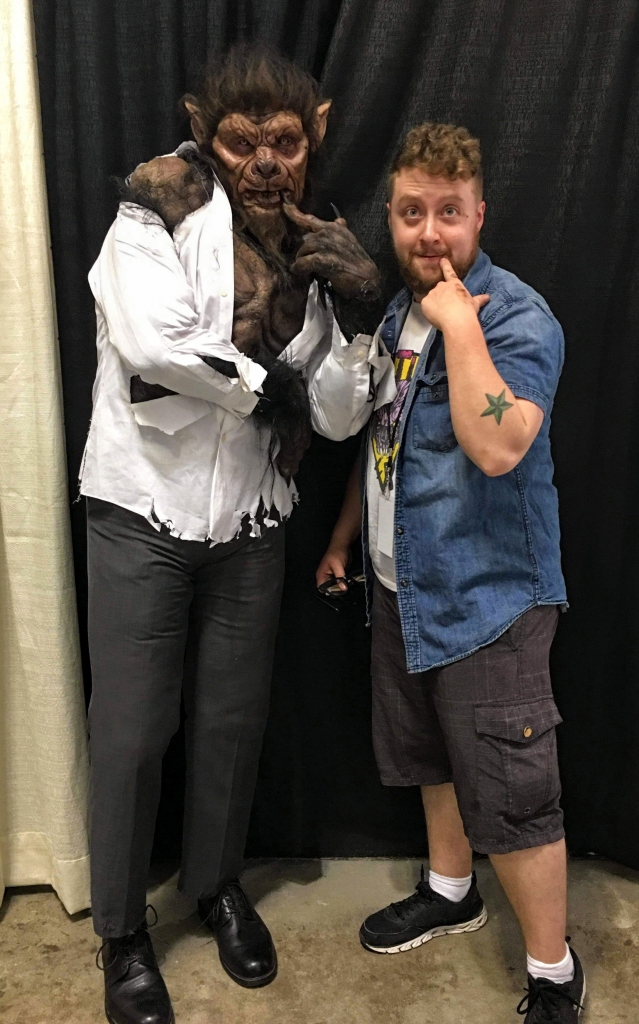 A catalyst for what would become the monster maker that Ricky is today would be Horror Conventions.

“I remember around 15 years old finding out about this convention, Horror Find. I had to sell my Mom on it, and she was nice enough to bring me all the way to Maryland. I entered the costume contest and ended up doing OK in it, and suddenly I was addicted.”

Ricky recalls a year or so later, building a Bat/Vampire creature. Using Bamboo sticks and old scrap fabric to construct wings, and skyrunner stilts to make himself taller.

“I thought the wings were going to be easy, because I used bamboo and fabric, but after 17 hours of holding them up, I was delirious. Those stilts, too. They’re the type that you can’t stand still on. Ken Foree (Dawn of the Dead) saved my life, although I’m not sure he knew it. I could hardly see anymore and almost fell off the stage, but he caught me and pushed me back on stage. Thanks, Ken. I ended up taking first in the costume contest though. One of the judges was Udo Kier, and he was absolutely in love with my work, although the snout of my bat was really big, and he thought it was a Wolf.” 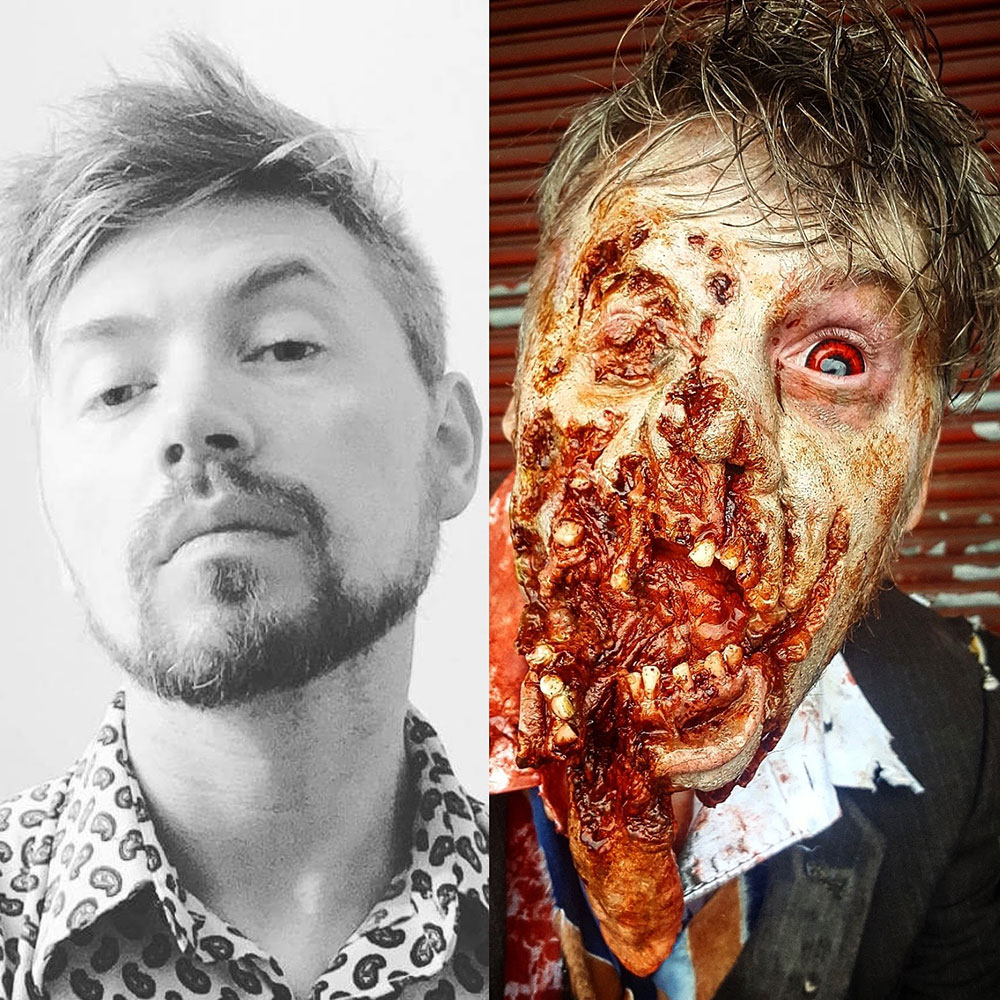 This flirting with creature acting sunk anchors in Ricky.

“Even though it was grueling, I loved being in the costume.”

When Ricky was 16 or 17, some initiative led to him starting a “shadow cast” of Rocky Horror Picture Show at a local theater.

“I think a high school performance of “The Wizard of Oz”, doing the Cowardly Lion, was my first prosthetic work. But Rocky Horror is where I really got to find my love of doing make up. I played Riff Raff. We even did some themed nights, like Halloween. I did a Freddy Krueger Riff Raff and Christmas Riff Raff as the Grinch. I also got to play Riff Raff in Atlantic City at the House of Blues for the 35th anniversary with Patricia Quinn. It was amazing.”

Ricky is a graduate of the Tom Savini Special Make-Up Effects Program at DEC.