Reel Review: Beyond the Gates

When two brothers reunite to clean out their father’s video store several months after he goes missing, they discover a VCR board game called ‘Beyond the Gates’.

When the brothers decide to play it, they discover a sinister host who may hold the key to their father’s disappearance with potentially deadly consequences. 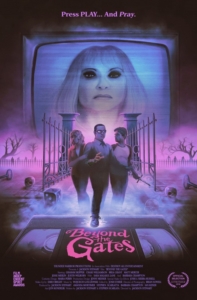 Beyond the Gates starts with a wonderful and loving opening sequence that shows the inner workings of VHS player technology while a time appropriate synth pop score plays over the credits. This detailed opening sets the tone for what’s to come: a nostalgic tribute to a bygone era that plays as smooth as a brand new VHS tape. After the tracking adjusts, of course.

When John (one of the brothers played by Chase Williamson) says of the video store in the beginning, “I don’t remember this place feeling so big,” I found the line to be absolutely wonderful. People usually say the opposite as they grow older, that places from their childhood seem smaller. The line made me reflect on the magic that was the Video Store and how it felt being surrounded by seemingly endless movie titles. Standing among all those shelves and rows of video tapes must feel pretty daunting as compared to the digital browsing of titles we do today on our Smart TVs. 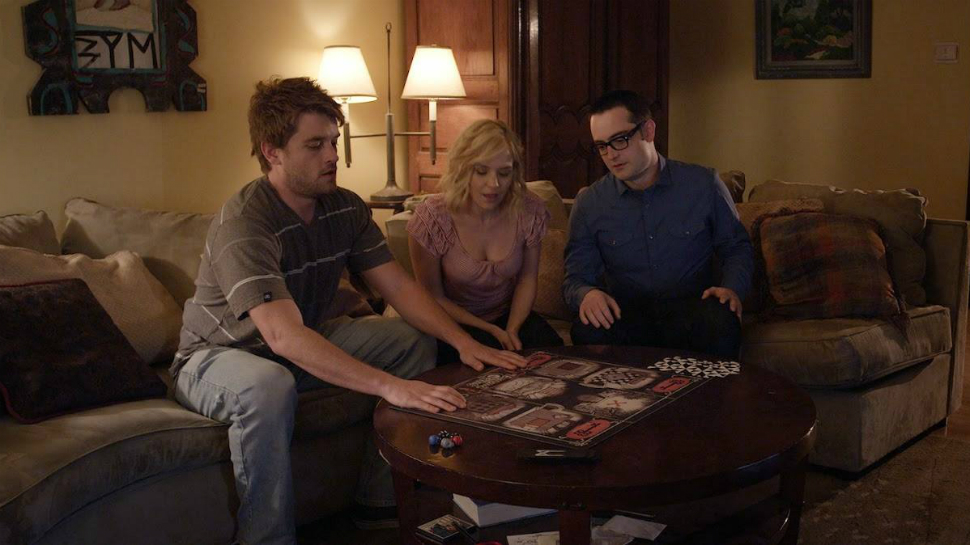 Graham Skipper and Chase Williamson as the two brothers are fantastic in this. The characters they play are very opposite of each other, but there is enough in the writing and portrayals to see that they also have a lot in common. Skipper and Williamson have a great chemistry together, and it was easy for me to believe that they had a history as brothers and a family bond between them.

Barbara Crampton is simply stunning as the sinister host of the board game. I loved the scenes where she was waiting for the players of the game to follow her instructions; it’s an eerie feeling of her watching them, as opposed to the other way around, and an early sign that something isn’t quite right with this board game. Crampton’s unblinking gaze and measured, chilly vocals create a phenomenal character, and she hands down steals the show. Her performance and ability, coupled with Stephen Scarlata and director Jackson Stewart’s script, is yet more proof that the horror genre provides women with strong roles and interesting characters. I should mention that Brea Grant and Jesse Merlin also give great performances. 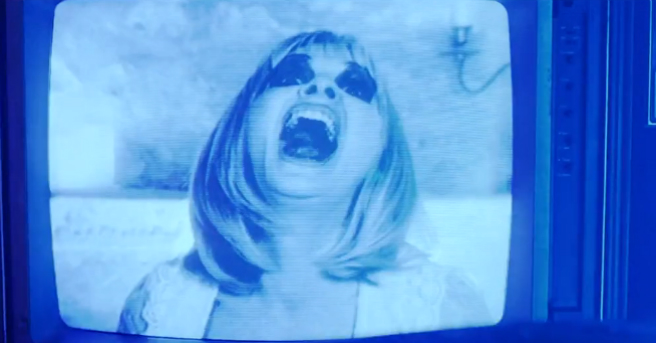 A surprising theme I noticed was the lost feeling that runs throughout Beyond the Gates, a sense of time passed. The lost era of VHS stores, the seemingly lost feeling in the lives of the brothers, the vanishing of the father, a case of sleepwalking, vintage/antique shops, and the snowy static of a TV screen with no analog signal. Even the deep and dark and steely eyes of Barbara Crampton made me feel lost as the viewer and brought me into the world of the film.

This sense of loss holds the entire film together — a brilliant technique that raises the stakes and puts constant awareness and intrigue on the VCR game that shares the title of the film.  As the characters play the game and the story unfolds, a parallel narrative is told. It is the idea that all is not lost, and that you just have to listen to the clues and know where to look. With a brilliant script and spot on direction, BEYOND THE GATES is damn near perfect.

Roll the dice and play Beyond the Gates. It’s a fun thriller filled with horror and adventure, and it’s one of my favorite films of the year.