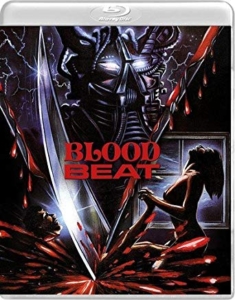 I went into my viewing of 1983’s Blood Beat (aka Bloodbeat) completely blind. As much as I’m a connoisseur of 80s low budget slasher fare, I’m ashamed to admit this obscure little direct-to-video flick had entirely escaped my radar. Thankfully, incredible companies like Vinegar Syndrome exist to uncover these hidden treasures and give them the loving treatment and recognition they deserve.

And what a loving treatment it is. The 4k restoration of this “lost on VHS” oddity is absolutely stunning. Among several bonus features, the Blu-ray release features a short interview with writer/director Fabrice Zaphiratos. In it, he discusses his first and only foray into filmmaking by explaining, “It’s a weird film…even for me.”

And that just about says it all. Beyond that, there are almost no words that can do justice to a film that honestly defies all explanation. 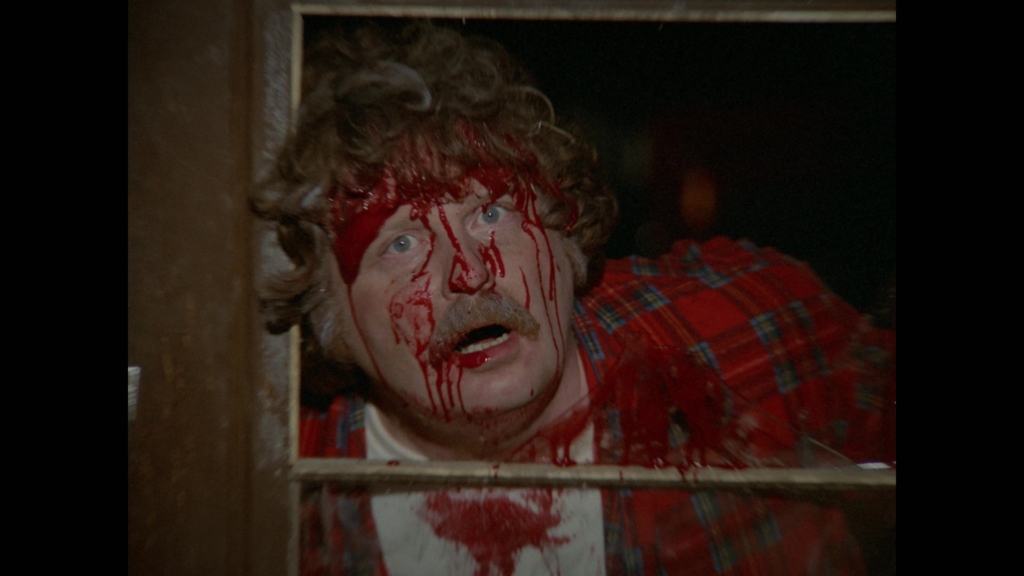 Honestly, it’s hard to even describe what kind of film Blood Beat is, as it’s unlike anything I’ve ever seen. It’s part slasher, part sci-fi/supernatural thriller, and part experimental art film with European horror influences.

Blood Beat takes place on an isolated farm in snow-covered Wisconsin. We’re quickly introduced to Cathy, a rather intense and somewhat off-kilter artist who suffers from strange visions and headaches. She lives with her extremely patient and doting boyfriend, Gary. The two are preparing for the arrival of Cathy’s college-aged children for the Christmas holidays.

When Cathy’s son, Ted, shows up with his new girlfriend, Sarah (Claudia Peyton), things immediately get awkward. In their first uncomfortable encounter, Cathy shoots daggers at the young coed, while Sarah appears visibly shaken. The women are both unusually connected and yet vehemently at odds. 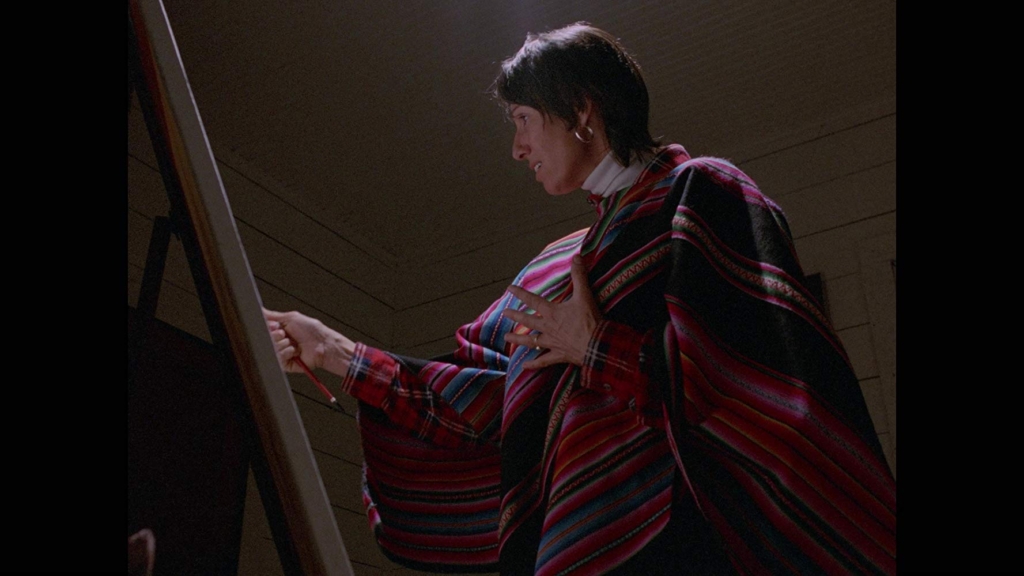 It isn’t long before both Cathy and Sarah begin acting increasingly kooky. As Cathy locks herself in a room to paint, she seems to become possessed — as if an unexplained force is painting through her without her control. Meanwhile, Sarah is having strange visions of her own. While Cathy hypnotically paints a picture of a Samurai, Sarah discovers a bedroom trunk full of ancient Japanese armor. Things get infinitely weirder from there, including an apparent link between Sarah’s orgasms and a string of bloody murders. Seriously.

The second half of the film — which is considerably more fun and fast paced than the first half — includes a heavy-breathing silent stalker, POLTERGEIST-esque kitchen nightmares, telekinetic super powers, bizarre special effects, PREDATOR-style thermal vision, and a Samurai ghost killer.

It all culminates in one of the most batshit crazy endings of all time — an ending even the director claimed is poorly written and barely coherent. 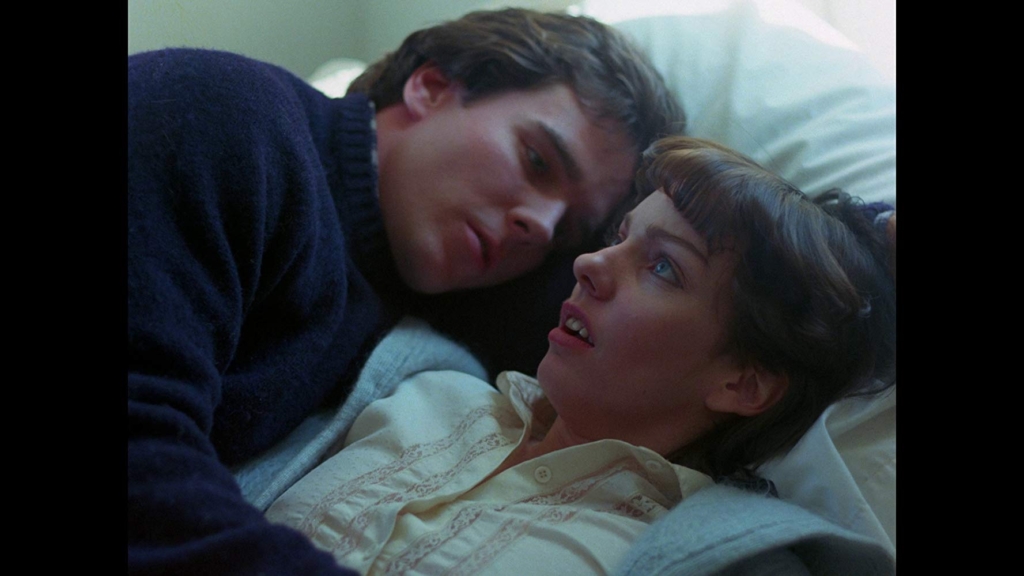 I watched Blood Beat three times within the span of a couple of days. I first watched it with a fellow fan of 80’s schlock, late one night, in the perfect frame of mind to fully enjoy the genius of this accidental masterpiece.

We both shared a sense of pure wonder and unbridled joy during our viewing. Our running commentary throughout the film sat somewhere squarely between Mystery Science Theater 3000-style riffing on the obvious absurdities and numerous declarations of sincere and non-ironic affection.

Afterwards, I had this overwhelming desire to tell everyone I knew about this wonderfully strange and captivating film. The problem was, I didn’t know how to articulate what it was I watched — or why I found it so endearing. Mind you, I still have that problem, even as I attempt to write this review. 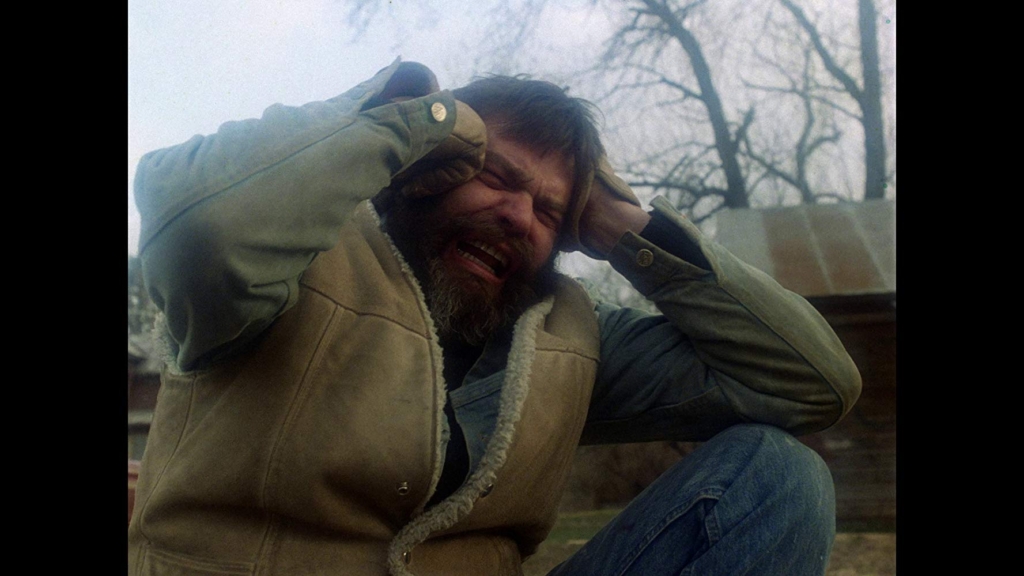 My second viewing was with my son, a serious cinephile and budding filmmaker. He watches films with a critic’s eye and can brilliantly dissect every frame from a technical and artistic perspective. Still buzzing from my virgin viewing, I gleefully went back for seconds — waiting to bask in the glow of of our mutual adoration for the film. What I got instead was a scathing indictment of everything wrong with Blood Beat. To be fair, however, all of this criticism was completely justified.

In almost every traditional assessment of cinematic quality, the film is a mess.

First and foremost, this movie makes absolutely no sense. It sets up a compelling mystery, with a host of questions begging to be answered. But little attempt is made to actually answer those questions, at least not in a satisfying way. It’s wildly uneven, with a first half that languishes and an erratic second half. The nonstop, tonally incongruent soundtrack — a hypnotizing mix of classical music, 80’s era electronic synth, and ridiculous sound effects — frequently overpowers and muffles the film’s already nonsensical dialogue. 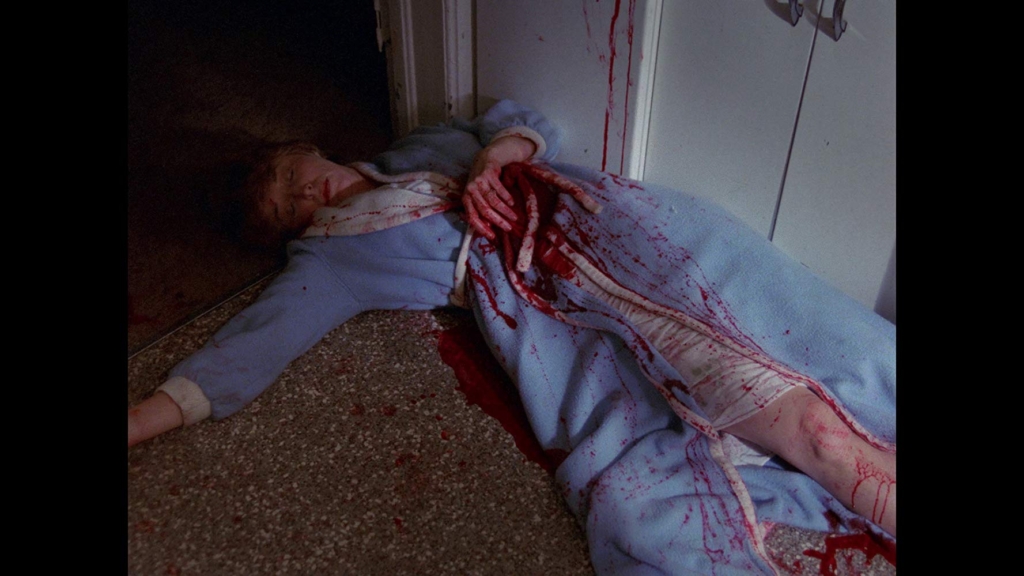 The cast is full of unknown first-time actors, most of whom only ever appeared in this one film. To that end, the acting is pretty questionable at times — though the writing doesn’t give anyone much to work with. Random characters appear with no context. Unusual scenes flash on the screen, hinting at a deeper meaning, but real connections are never fully formed.

In a spot-on observation, my son summed up his thoughts with, “It’s as if this movie is a puzzle with all these interesting pieces, but none of them quite fit together.” Later, however, he did confess, “The more I think about it, the more it grows on me.”

Blood Beat has that kind of effect. By every reasonable measure, it should be easily dismissed. But somehow, inexplicably, it’s got a considerable charm that’s hard to ignore. 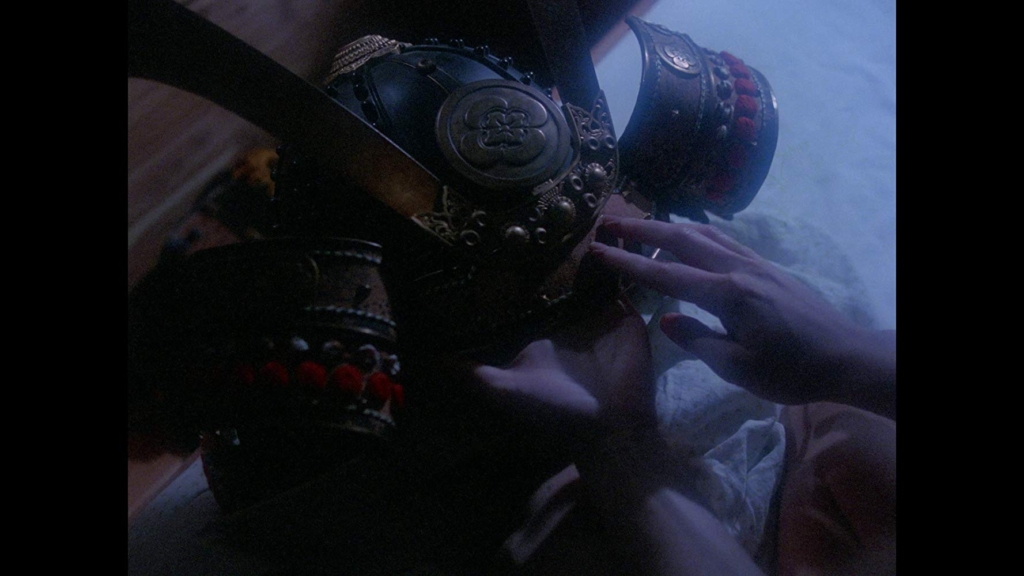 My third watch was a solo venture, with the Director’s commentary turned on (subtitled in English). And this only served to both complicate and deepen my love affair with the film. The commentary is in fact, just as strange as the actual movie.

Zaphirato explains that two of his leads, Cathy (Helen Benton) and Gary (Terry Brown), are in no way actors, but rather a real life couple whose unique relationship inspired much of the writing for the film. The paintings that play a prominent role in the film were done by Helen and also inspired the script.

Almost immediately, he confesses to being on a variety of mind-altering substances while writing and filming Blood Beat, adding, “For many people the film, then, is very strange.” 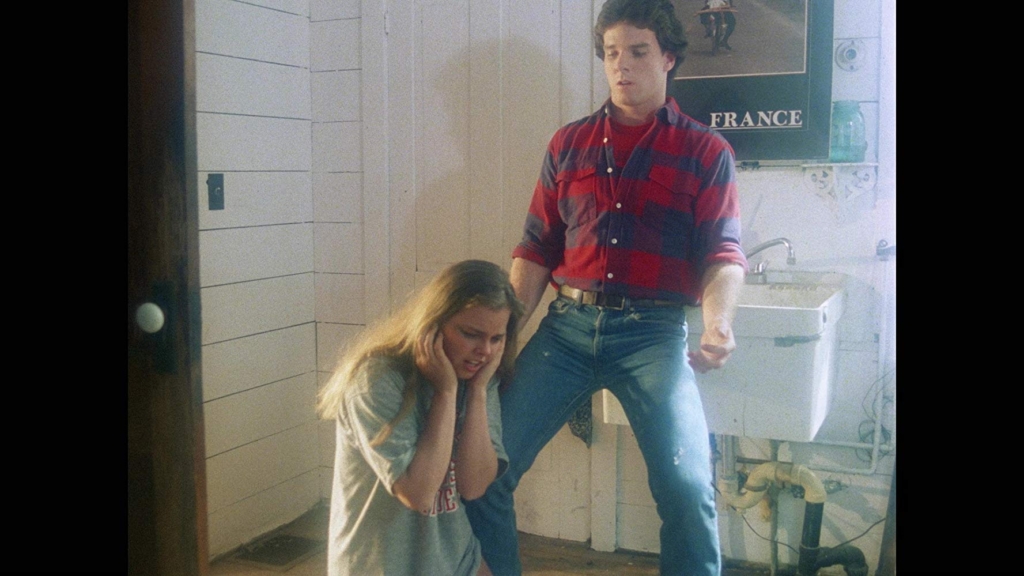 He talks about how much he enjoyed the provoking nature of Sarah’s exposed breast during an early romantic scene with Ted. He explains that he was not a very good director and mostly improvised, expecting the actors to improvise as well. He discusses the many technical problems with the film, but takes pride in the enormous creativity and ingenuity needed to pull off the filming on such a small budget.

What does it all mean? Even the filmmaker himself doesn’t seem to know. Watching the film for the first time in 35 years to complete the commentary track for Vinegar Syndrome, Zaphirato says he doesn’t really want to explain the story as it’s “a bit peculiar.” He suggests the viewer draw his or her own conclusions.

He asks himself the inevitable question all viewers will ask, “What the fuck is a Samurai doing in Wisconsin?” He answers himself, “Why not?” Why not, indeed. 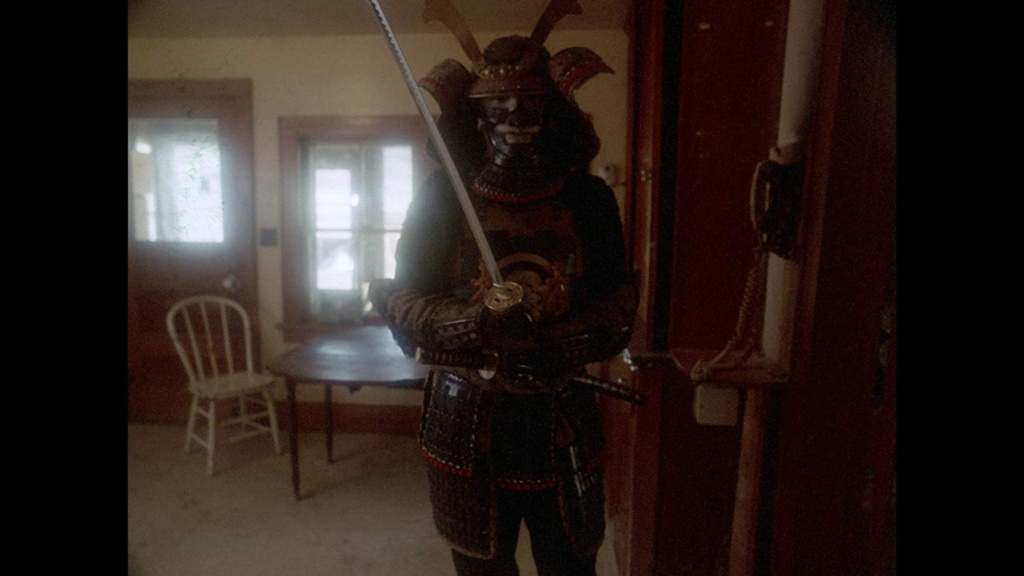 As bonkers as this film truly is, it’s far from your typical 80’s cheese-fest. There’s a sincerity at play here that helps elevate this film and draw the viewer in. In fact, in the interviews with Zaphirato and DP Vladimir Van Maule included in the special features, both men discuss how seriously they took the film.

For Zaphiratos, there was real artistry involved. He talks about his love of cinema — instilled in him at an early age by his filmmaking father, his obsession over aesthetics, his meticulous attention to details, and his love of nature that infused so many of the film’s quite striking outdoor shots.

He speaks about the importance of color, about having items of clothing brought over from France to tell the perfect visual story, about his love for Marvel and Star Wars, and the beauty of having Vivaldi playing in the background of a scene. 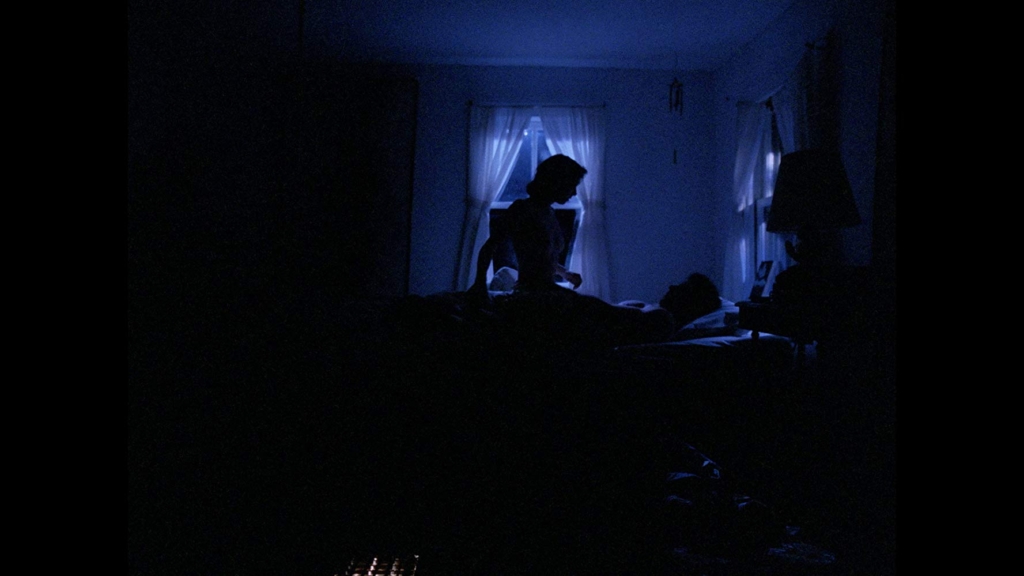 Likewise, Cinematographer Van Maule talks with reverence about the use of practical effects (in one scene, Zaphiratos himself performs a stunt involving a man going through a window) and how carefully each scene was planned out. He speaks of the importance of storyboarding and technical expertise. He talks about the difficulty of the genre and the necessity of building suspense, stating, “It can’t be cheesy. You have to take it seriously.”

Whatever drug-induced madness helped fuel this indescribable oddity, it worked for me.

I was mesmerized from the opening shots of scenic beauty to the wonderfully unhinged ending. Despite its flaws, there were moments of truly inspired filmmaking. At times, there were even flashes of surreal cinematic magic and surprisingly affecting use of vivid color, reminiscent of Italian master Dario Argento. 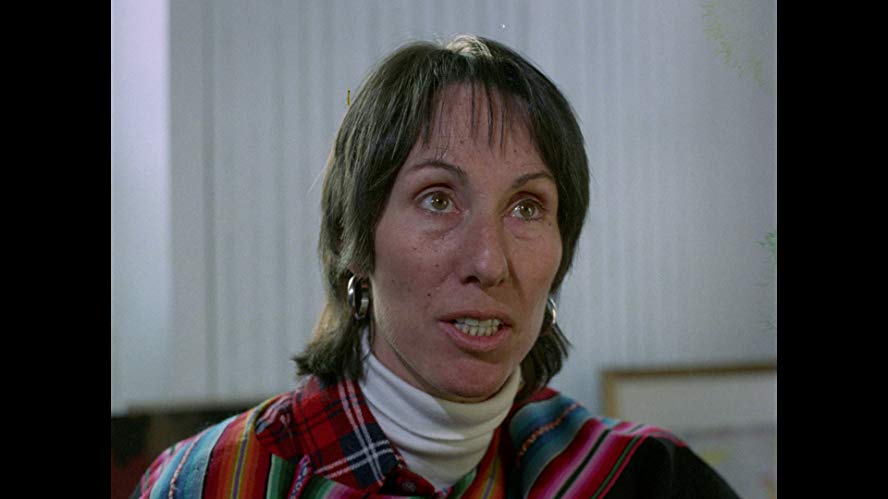 The performances, while undoubtedly weird, are utterly watchable. Helen Benton and Claudia Peyton deliver the standout performances. Benton reminded me a great deal of Shelly Duvall in The Shining, and her strange screen presence really worked for the role.

In his commentary, Zaphirato confesses to not really being much of a horror fan — having only seen one slasher film, Friday the 13th, before making Blood Beat. Perhaps that’s why the film feels so refreshingly original.

As a side note, be sure to check out the silent version of the film on the Blu-ray Special Features. Cut down to a third of its run time, the re-edit is silent save for an accompanying score, featuring music by Nervous Curtains and Horror Remix. It’s an extremely interesting take that really emphasizes the avant-garde nature of this offbeat and rather mystifying film.