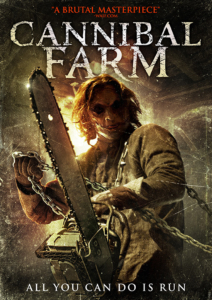 An isolated countryside. An eerie, abandoned-looking farmhouse. A group of unsuspecting victims. A family of murderous, bloodthirsty, cannibalizing sub-humans.

All of these elements can apply to both Tobe Hooper’s The Texas Chain Saw Massacre and the more recent British indie horror film Escape from Cannibal Farm (aka Cannibal Farm in the US/UK), the sophomore effort from writer-director Charlie Steeds. Both films even have a fairly silly title. But Steeds’ film is not necessarily an homage to Hooper’s iconic masterpiece or even a treading of familiar and blood-soaked ground.

In fact, through an engaging script, genuine character development, and a string of surprising twists at the end, Cannibal Farm is its own beast, powerful and frightening.

Add to this list a jarring, explosive soundtrack and the end result is an engrossing horror film with great performances from a large ensemble cast.

Don’t let the similarities to the grind-house classics of yesteryear prevent you from tracking this movie down and diving headlong into its grimy tale of sacrifice and familial revenge.

The film begins with the Harver family setting out for an idyllic camping trip; of particular focus is Jessica Harver (Kate Marie Davies), whose role in the film goes through a number of surprising transitions. The exposition here is a little rocky, the dialogue a bit sophomoric and uninspiring (however, as the family argues and the siblings bicker, who’s to say how it should really sound? Most fights among family members are pretty juvenile).

But the speed of the picture increases once the Harvers are threatened by a nocturnal presence and eventually come upon the desolate property of Hunt Hansen (Barrington De La Roche). And, as one might suspect, farmer Hansen does not live alone…

The name of the villain is no accident here, for the Harvers will be hunted and some will eventually be caged like wild animals fattened for slaughter. But Escape from Cannibal Farm is not a lowly torture-porn flick; while there is violence and brutality, the victims respond with great vigor. They scream and they cry, but most of all they fight back, all the while exchanging dialogue that advances the plot and reveals insight into character.

The bad guys have a back-story that’s fairly generic, but even here Steeds adds a few unexpected turns that provide depth to the trauma shown on the screen. And it’s not a film without heart; during one of the death sequences in the climax, a kindhearted gesture from Mrs. Harver (Rowena Bentley) makes her character and the characters of her children seem all the more human.

The special effects, the blistering score (Sam Benjafield), and the claustrophobic cinematography (Michael Lloyd) all contribute in meaningful ways to this excellent little gem.

‘Cannibal Farm’ is a multi-layered film, transcending its predecessors and breaking new ground; the actors give it their all, and the overall look and feel of the movie is polished and crisp.

And, in even more good news, the conclusion of the picture suggests that the Hansen farm may continue its gruesome traditions—and if that means a sequel, then horror fans have something very exciting to look forward to.