Posted by:
Tags:  Corpse of Anna Fritz The Mind's Eye

This Thanksgiving week, we feast on a couple of tasty dishes from 2015: “The Corpse of Anna Fritz” and the mind blowing “The Mind’s Eye”.

As a result of the Thanksgiving holiday, I only have two films to share with you this week. While my plate may be leaner than usual, there’s still quite a bit to digest…so let’s dig in!

The Corpse of Anna Fritz (2015, directed by Hector Hernandez Vicens) 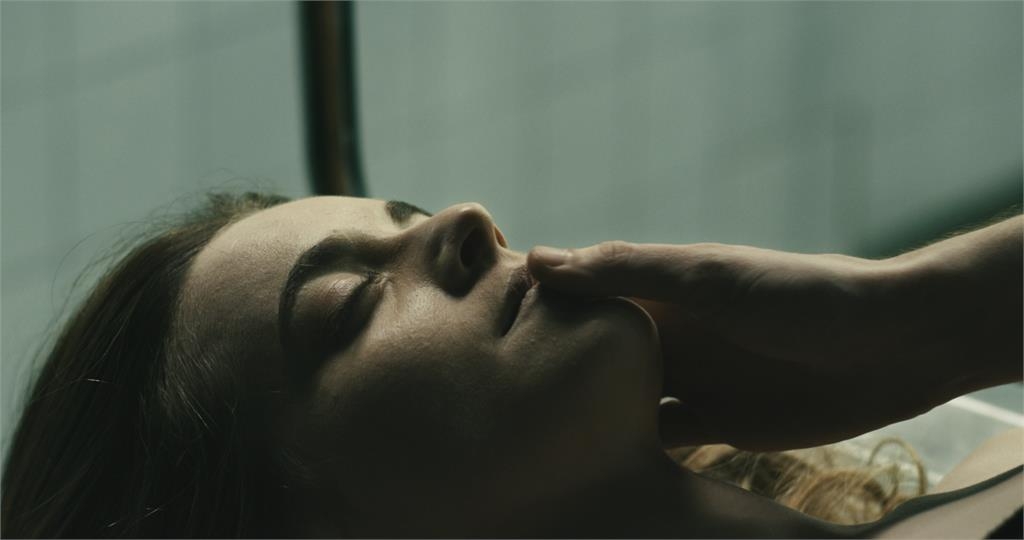 Horror sub-genres are so much fun!  There are so many, and finding/inventing new ones is even more fun.  Now we are seeing the birth of two new horror subgenres . . . the “It” subgenre, which is comparable to all the “Don’t” movies of the late 70s and early 80s.  So far, we have It Follows, It Comes at Night, and of course, It!  Another subgenre that seems to be taking shape is the “dead hottie on an autopsy table” subgenre.  This one is a bit more difficult to nail down, themewise.  Deadgirl is definitely the big one, the Night of the Living Dead of “dead hottie on an autopsy table” movies.  The Autopsy of Jane Doe can be filed into that category too, I guess.  Now we have what could be considered a third one.

The Corpse of Anna Fritz is a brief (75mins.) chamber piece about, well yeah, a dead hottie on an autopsy table.  It starts with an autopsy table being wheeled through a hospital.  During the opening credits we hear radio broadcasts about a superstar actress named Anna Fritz.  The news announcers cannot possibly be more enamored with her beauty, stylish fashions, and hot boy toys.  Then things darken as the news reports begin announcing her tragic and mysterious death. 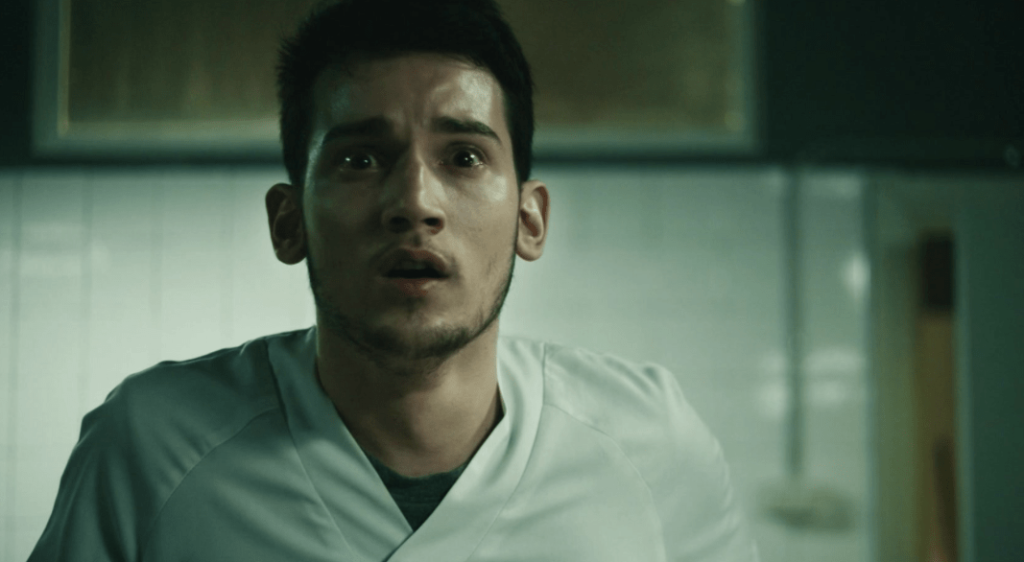 Seeing the gurney wheeling around sterile corners, and hearing the radio broadcasts gives us a pretty good idea about the unpleasantness that awaits us.  This was a brilliant way for Vicens to set up his film with minimal exposition and a miniscule amount of running time.  And the whole sequence ends with the pusher of the gurney wheeling into the morgue, pulling back the sheet, and taking a picture of her dead body on his iPhone to show to his buddies.

Movies like these are difficult to discuss, because all the most effective and remarkable things will seem horrible when I describe them, even though my intentions are to flatter it.  But anyway, first thing is the groaning nausea I feel in my stomach.  I’m very impressed by how nervous and disgusted this movie made me feel.  I love being “hurt” by movies.  There is a greenish and sterile color scheme to absolutely everything, which compliments the setting and events well.  My meaning there is that, for instance, if the color scheme was red and sterile, it wouldn’t work. 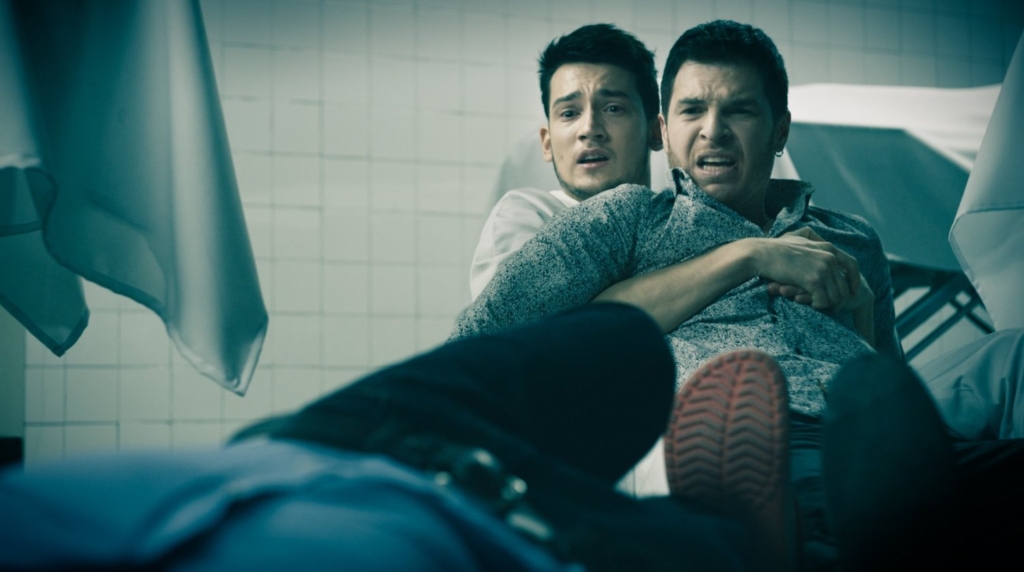 The entire movie plays out in mostly three connected rooms (one of which is a hallway), and there are only four actors.  And one of them is dead.  Alright, let me get to this.  Delicately.  If sexual abuse of any kind is a trigger for you, don’t watch it.  At all.  This isn’t one of those “skip the yucky parts” kind of movies.  It’s all fucking yucky, and puke-green to boot.  See, now that last sentence was actually a compliment!  It didn’t seem like it, but it was.

Boils and ghouls, I am at a standstill, because any more information I give you will spoil it, and I want you to go into this with no information.  My Cine-file ‘responses’ are to arouse your interest and curiosity, not satisfy it.  Just remember the genre I put it into, and the trigger warning.  Lovely horror friends, from there, I trust you’ll figure the rest out for yourselves, by yourselves. 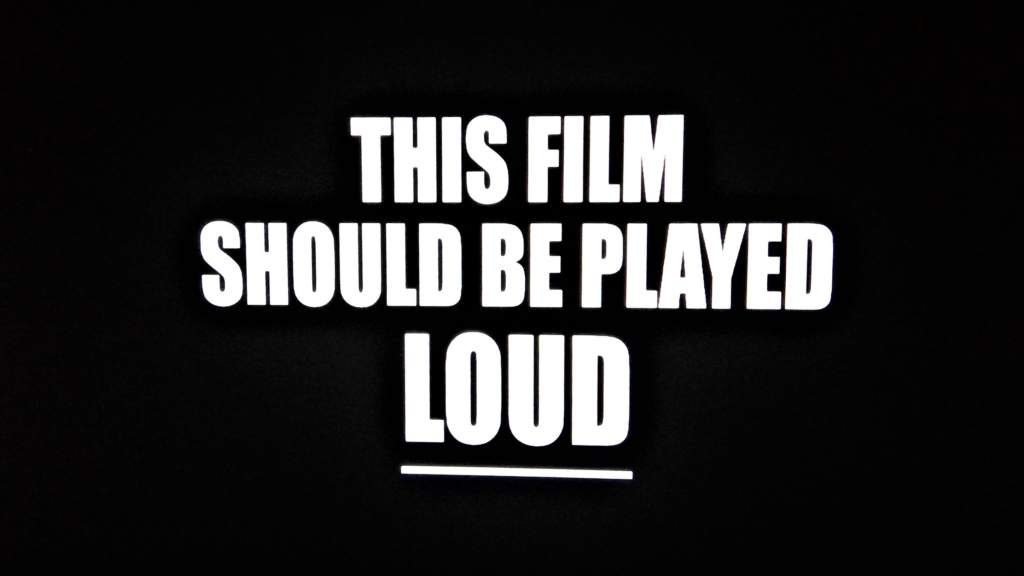 Phenomenal!  I’m ashamed of myself for being so late to this party.  This is an explosive, brain-vein-eye-bulge-eardum-aneurysm blood eruption!  Before I even get into the actual movie, I need to call attention to the first thing shown onscreen: “THIS FILM SHOULD BE PLAYED LOUD” in huge white-on-black letters.

That right there is secret code for “prepare to get your ass kicked by a movie”.  The sound design is a digitally shrill sensory overload, with a pinpoint focus on what sensations a hyperactive telekinetic mind might feel.  The simulated throbs and shrieks do indeed require a high volume to get the maximum effect.

In The Mind’s Eye, we begin with Zack, played with moderate restraint (at first) by Graham Skipper.  Zack appears to be a harmless drifter of some kind, strolling down a snow-covered rural road.  After an intense police encounter, he is put in the custody of Dr. Michael Slovak, the head doctor of a telekinetic research institute. 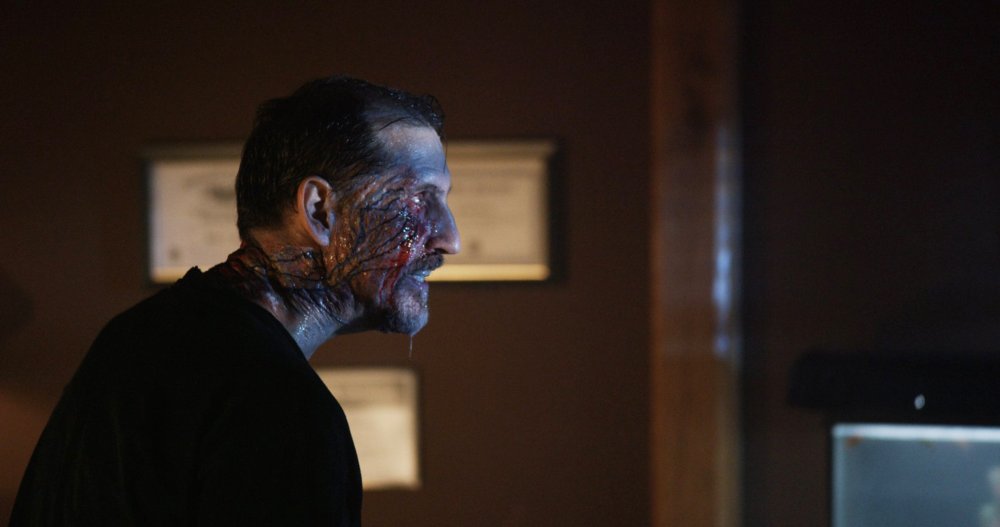 Zack, you see, can move things with his mind (telekinesis).  I don’t mean bending forks and playing hands-free checkers telekinesis, I mean head crushing and structure-shaking telekinesis.  The doctor lures him into a research project, promising that he will see his long-lost girlfriend Rachel (Lauren Ashley Carter), who is also telekinetic.

She is being held prisoner in the basement, and is also treated like a lab rat, but Zack never ends up seeing Rachel.  He is just put through agonizing “cycles” of injections with the intention of muting his natural telekinetic ability.  But the doctor is secretly injecting himself with his own synthetic serum that gives him all the