A stellar cast and stylish direction make Berk and Olsen’s whimsical, dark, and smartly contained thriller “Villains” a must see. 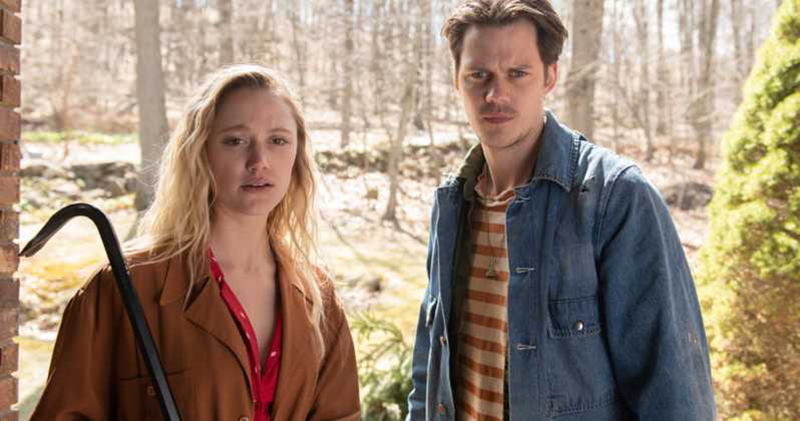 From the jump, Directors Dan Berk and Robert Olsen (“Body”, “The Stakelander” are working with some heavy hitting talent. Once the duo got a commitment from the uber-talented breakout Skarsgård, the pieces started to fall in line, and they got their dream girl for “Jules” in Maika Monroe.

Kyra Sedgwick is commanding and comforting simultaneously as she displays her preeminent skill. Bringing it home, Jeffrey Donovan is proof why typecasting is fucking bullshit, and that he easily should be considered in the upper echelon of talented Actors.

“Villains” is a story of two young lovers on the run (Skarsgård and Monroe as “Mickey” and “Jules”) to Florida to start a “new life” together.

Like two drunk Bees, they knock off a gas station one last time, but Mickey forgets to gas up. The whole robbery scene comes off as an ode to the death of the heist. Mickey’s inability to operate a digital cash register shows his character’s reluctance to earn a working Man’s wage while also being somewhat allegorical of the transition in society, leaving the analog, point and stick’em up robbers in the dust.

With their car out of gas, they break into a seemingly empty house with a car, ripe for stealing, in the garage.

Unable to find keys to the car in the garage, and apparently not skilled car thieves, Mickey and Jules brainstorm over a filling of nose candy on how to proceed with their plot. As I sat and watched the scene unfold, I got annoyed with the writing, asking myself, “Are they too stupid to syphon gas?” As if Bobby and Dan were listening to me, saying “No need to worry”, Mickey’s newly found cocaine brilliance spewed out, “We’ll syphon gas!”

A few times throughout the film I felt as if Berk and Olsen planted lazy moments of writing only to instantly reconcile the issue like it were a big tease all along. I enjoy being toyed with like that and proven wrong. Searching for a hose, they of course stumble upon a dark secret in the basement, held by George and Gloria (Donovan and Sedgwick), a chained up little girl named Sweetiepie (Blake Baumgartner).

The premise is, admittedly by the Directors “nothing new”.

But what sets this film apart is a showcase of talent and vision that is undeniable.

It was a smart choice for the directing duo to continue their formula from “Body” in using a single location, as it provided them the opportunity to show what they could do without overextending themselves.

From a whimsical panning shot of Mickey and Jules doing recon as they enter the empty house, to a gorgeously framed and colored shot of Gloria undoing her corset from above, Berk and Olsen laid out a laundry list of “money shots” that each in their own right could have been singular catalysts for a movie.

You could imagine writer/directors sitting in a small cramped room, cooking up an idea for a cool kill scene from the perspective of the weapon and storyboarding that idea as they build a single thought into an entire script, but BobbyDan had enough gold to put in front of the lens in this one movie to fill a career.

Ultimately, the film is a window into the fucked-up way people mourn.

Bringing that emotion to the extreme. Whether it be Gloria filling a void with porcelain and abducted children or Jules stoically carrying on her mission despite tragedy, it’s an easily relatable emotion that no two people deal with identically.

All four main characters have unique and loud voices. Their dialog and actions very clearly were manicured just for them, and it shows a great harmony between the creative minds of this film. The dialog and the acting are the real drive train of the story.

The four principal actors spent their off-camera time in a rented house, together, and the chemistry that is built organically by humans spending every waking second together as well as the advantage of a week of rehearsals prior to shooting has paid lofty dividends on the screen.

The foursome’s on-screen meeting and subsequent long and surprisingly reticent exchange is a gluttony of consonance. Especially the contrast between Jules and Gloria. The generational lines as well as their portrayal of the characters system of values is palpable.

It would be criminal to not mention the set design of this film before I finish here.

Award worthy work done by Annie Simeone. It was a character unto itself.

Not to take away from this film, but it felt somewhat like an audition for Berk and Olsen. An audition that they nailed. I can’t wait to see what they bring next.

Villains is in theaters September 20th.