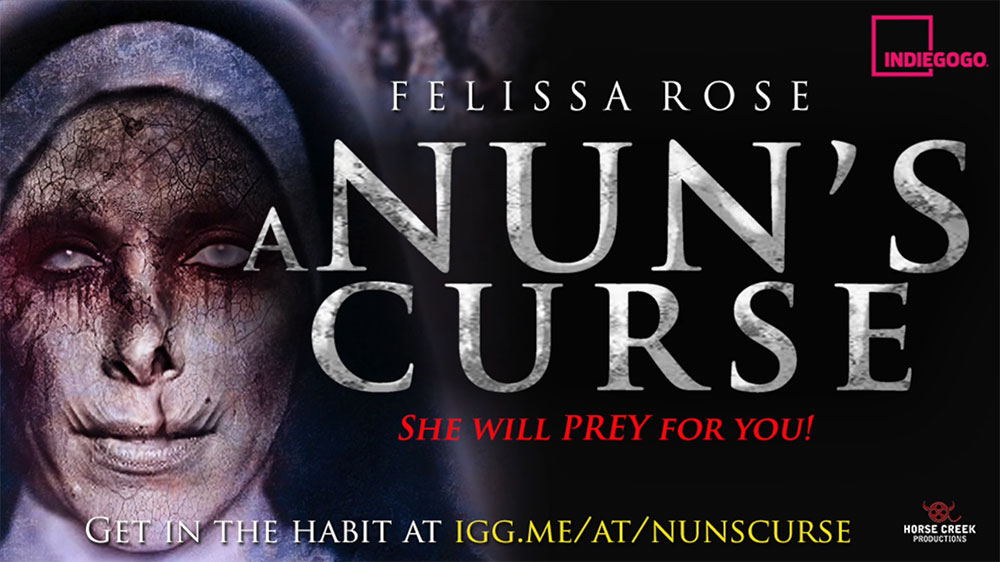 We’re excited to learn the full cast of the upcoming horror film A Nun’s Curse from writer and director Tommy Faircloth. Leading the cast is horror favorite Felissa Rose. With the production being described as The Breakfast Club meets Saw, our interest is peaked to say the least! The Indiegogo campaign for A Nun’s Curse is currently live, and you can contribute by clicking here.

Read the official press release below for all the current details regarding A Nun’s Curse. And keep an eye out for an upcoming interview with newly added cast member Kristi Ray.

Writer and director Tommy Faircloth (Dollface, Family Possessions) of Horse Creek Productions has announced his next feature film called A Nun’s Curse. The film will star Felissa Rose (Sleepaway Camp, Victor Crowley) as the notorious Sister Monday, who once worked at a prison where she was suspected of murdering prisoners serving out their sentences.

The film will also star Damian Maffei who played “man in the mask” in The Strangers: Prey at Night, as well as Gunner Willis who starred in Faircloth’s slasher Dollface. Rounding out the lead cast will be Kristi Ray (Pieces of Talent) and Erika Edwards (Family Possessions) who portray sisters in the film.

The story centers around a group on their way to a retreat, who find themselves stranded and are forced to seek shelter in an abandoned jail where the “twisted sister” had once been assigned. Once inside, the travelers are forced to face their fears as the story of the nun is revealed to everyone.

“It’s going to be like THE BREAKFAST CLUB meets SAW”, explains Faircloth. “The entire story takes place in one night, and when you are trapped with no place to go, the only escape you have is in your head. The most scariest monsters and places out there exist in your mind.”

Tony Rosen, who is most famous for creating the Annabelle doll, is making key props for the film, and Sean Krumbholz will be providing key makeup and special effects.

There is currently an Indiegogo campaign for A Nun’s Curse where you can pre-order a DVD, name a character in the film, get key props used and much more. Visit the campaign at www.igg.me/at/nunscurse.