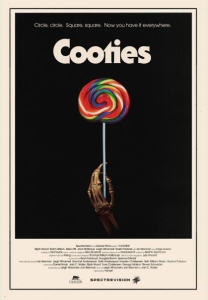 Cooties opens with an appropriately disgusting title sequence that accomplishes two things. First, it does a great job establishing the tone for the film and setting audience expectations. Second, if you’re not already a vegetarian, you’ll seriously consider becoming one after watching contaminated chickens getting ground up into paste to make nuggets. The sequence climaxes with a repulsive and stomach-turning scene. At this point, if you’re fully on board, you’re likely to enjoy the kind of sick and twisted shenanigans ahead.

Cooties (2015) tells the tale of a schoolyard full of pre-pubescent kids who develop a genuine taste for flesh after being exposed to a spontaneous viral outbreak that rots the brain and spurs cannibalistic proclivities. It’s is an irreverent, gleefully politically incorrect zom-com.

Told from the teachers’ perspective, this satirical tongue-in-cheek movie feels wrong in many ways. There’s something at once deeply disturbing and strangely satisfying about seeing a handful of irresponsible adults brutally beating down a pack of schoolyard ankle-biters, even if they are flesh-eating zom-kiddies. In spite of the pervasive humor and silliness, it can be cringe inducing to watch a teacher bash the head in of a young kid with a fire extinguisher (reminiscent of Irreversible, although thankfully much less graphic and brutal).

The reviews I’ve seen to date have been polarizing, with people falling squarely into the love it or hate it camp. That’s to be expected with a horror comedy of this nature, especially with a film that relies so heavily on its absurd and rather twisted premise to drive both the humor and the horror. In the end, you either need to embrace the bad-taste premise and settle in for a rather fun thrill-ride, or you should avoid this film like the proverbial plague.

Cooties was written by Ian Brennan (creator/writer, Glee) and Leigh Whannell (creator/writer, Saw), which is an admittedly odd but exceedingly clever pairing. Bringing two writers together with such disparate sensibilities really seems to help the film achieve that delicate and difficult balance between ridiculous, often highly inappropriate, humor and hard-R horror.

Both Brennan and Whannel also appear in the film, rounding out a solid cast of seasoned actors playing members of the surviving faculty. Each member of the core cast shines, while portraying typical suburban caricatures, including scene-stealing Rainn Wilson, Alison Pill, Jack McBrayer, Nasim Pedrad, and Elijah Wood (who once found himself on the other side of this teacher-student showdown in the 90s teen horror, The Faculty).

Whannell and Brennan’s intentionally absurd script blends beautifully with Jonathan Milott and Cary Murnion’s solid direction and flawless execution of the ensuing chaos and carnage. It’s a movie weighted heavily on the side of laughs over scares, which may turn off the more hardcore horror fan. But the directors do know how to dial up the intensity when needed, and the practical effects are quite strong.

Cooties is wry and satirical, but the satire is only surface deep. We do get some great semi-political commentary on privileged parenting, post-9/11 patriotism, right wing conservatism, and science teachers who rage about being forced to teach evolution. If that’s not your cup of tea, don’t fret. Everything here is played strictly for laughs. The film is far more interested in being entertaining than thought provoking.

Millot and Murnion bring a strong, well-developed visual style to this film. Things lag a bit when the teachers start crawling through air vents to escape. For the most part, however, this film is well paced and well shot from beginning to end.

Cooties is a star-studded, very funny, and often very disturbing zom-com that’s heavy on humor, while remaining sadistic and gory enough to play to horror fans. If you’re a fan of horror comedies and aren’t turned off by the premise, you should find this a solid and highly entertaining watch. However, it may not be quite dark enough or genuinely shocking enough to warrant true cult status.

Wryly funny and a bit demented, Cooties is a fun ride for fans of both comedy and horror. It’s a clever and competent entry into the heavily saturated zom-com subgenre. While it may not reach iconic status, it’s certainly memorable enough to stand out from the crowd.