“The Believers” is a solid, under-the-radar thriller with an unbelievably strong cast and a script from “Twin Peaks” creator Mark Frost. 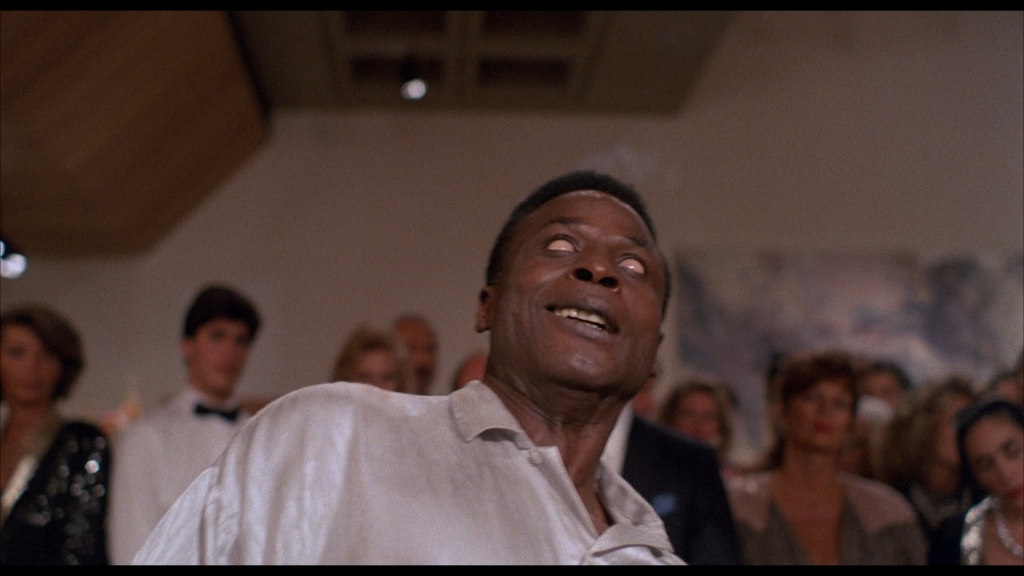 A recently widowed psychologist and his son move to New York and encounters a dangerous cult hellbent on sacrificing children. Let’s dig into 1987’s “The Believers”, directed by John Schlesinger!

The opening scene set the tone. An OCD nightmare of dirty dishes and cigarette butts, spilled milk cleaned up with dirty socks, and running late to start the day. It is a subtle yet brilliant way to begin.

The death of Cal’s (played by Martin Sheen) wife not five minutes in is a gloves off statement. Unfortunately, the story never fully delivers. It breaches the waters of mediocre a few times but ultimately glides just below the surface in the realm of quality but never extraordinary.

Based on a novel by Nicholas Conde, “The Religion”, The Believers was adapted for screen by Twin Peaks creator Mark Frost. There are some moments that echo like Twin Peaks, specifically the fundraiser scene with the cigar smoking couple. Yet, even with content which is intrinsically unsettling such as cults and ritual sacrifice, The Believers can never quite deliver the vertigo inducing effect that Frost and David Lynch would so expertly craft. 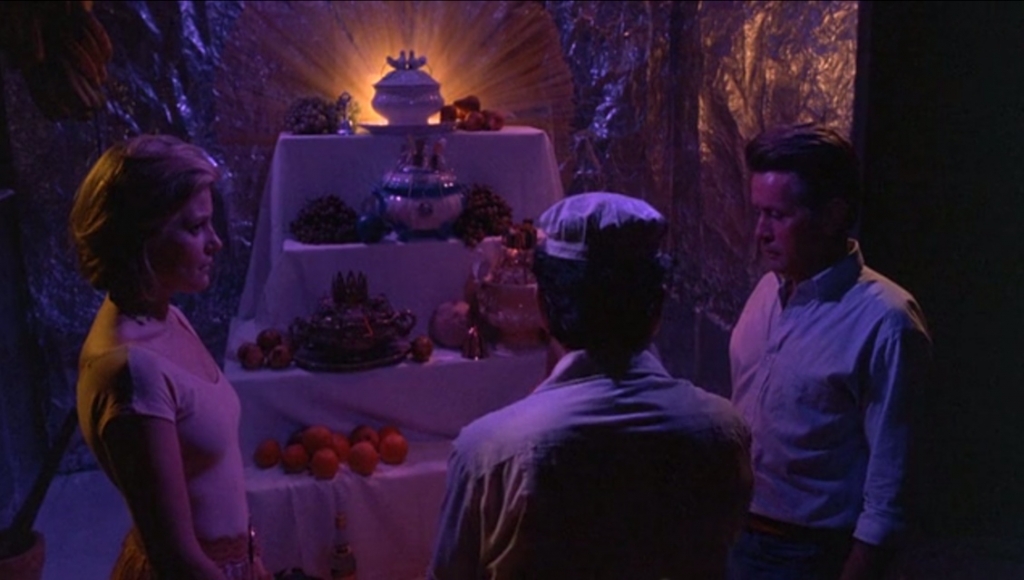 The production design does shine. A glimpse of the old New York – which expired not long after – can be seen and adds a menace that can not be fabricated. A dedication to detail for the Santeria rituals comes across genuine, if not irresponsible, but that’s how most religious fear mongering plays out on film. It’s sensationalized for purpose and seldom takes the time to explain the theology it presents, which in turn steers public perception of little-known religions such as Santeria or even Satanism.

The most frightening scene was when Jessica (played by Helen Shavers), Cal’s new girlfriend and landlord, has a boil burst on her face and a burst of spiders emerge from the fleshy womb. Not to put down the horror of arachnophobia (which I have suffered from my entire life) but sacrificing children should have led the charge if it were presented with more concern rather than just part of the greater story.

A cast of heavy hitters make this a worthy watch.

Martin Sheen as the protagonist Cal. Just seeing him on screen makes me want to watch Coppola’s Magnum Opus, Apocalypse Now. He birthed quite a few famous children as well that I’m sure need no introduction.

I always found Jimmy Smits (Officer Lopez) to be an underrated actor. He’s found plenty of high-end work throughout his career – he was amazing on NYPD Blue, he smashed his season of Dexter – but he unfortunately was at peak star age during an era that didn’t allow TV stardom to translate to film stardom. It’s a shame, because he should have been able to chew on some real award-worthy roles. That’s not to say he didn’t get a crack at film. One 1980’s buddy cop comedy that should not be looked over is Running Scared (1986), where he plays the bad guy to Billy Crystal and Gregory Hines blue duo. 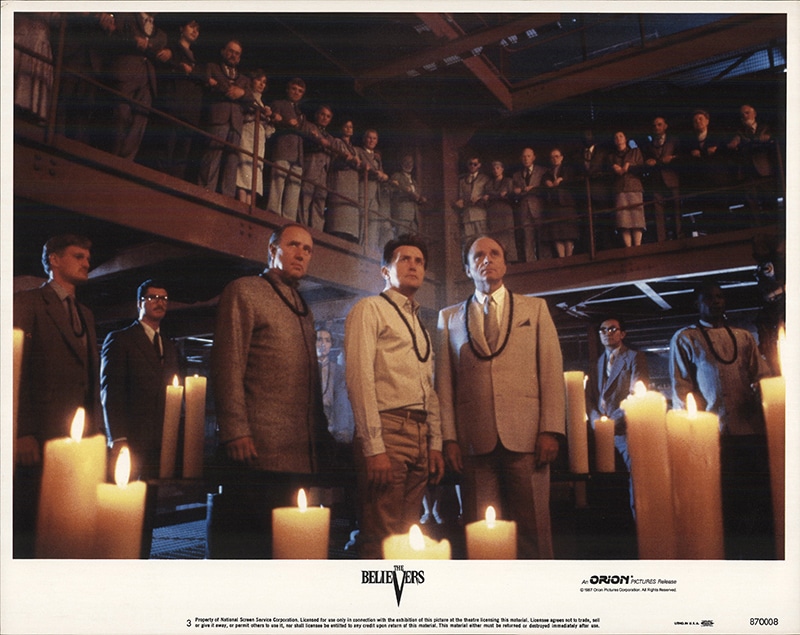 Richard Masur plays Cal’s best friend Marty, and I’m not sure I’ve ever seen Masur in a role that didn’t make you want him as an Uncle to go to for advice. From Phil Sultenfuss in My Girl (1991) to this film (maybe less so in Carpenter’s The Thing).

Try not to read Robert Loggia’s name in his trademark gravelly voice. I can’t do it.

Harris Yulin who plays wealthy businessman and creepy cultist Robert Calder may best be recognized as the Judge in Ghostbusters II (1989) or Bernstein from every good Christian’s favorite “how to be successful” film Scarface (1983).

A little more care could have been paid to reconciling the difference between black magic and an entire culture’s belief, but personally all religions play out like black magic when they’re adhered to with such extreme blind faith. 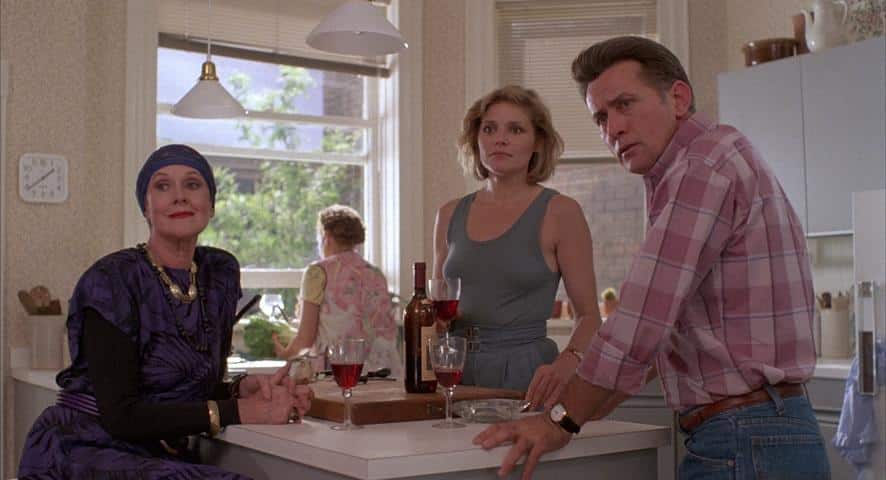 Helen Shaver has a square Debbie Harry vibe and is stunning in a salmon dress during the fundraiser scene.

Feels like something that would be better suited (and probably was) as a Law & Order episode rather than another film.

Olive Films released a Blu-ray, which is available on Amazon. You can also stream it for free on Tubi.