A highlight reel of 80s gore, this knife wielding twin slasher will make you eyeball the cranberry sauce with reservation this Thanksgiving. 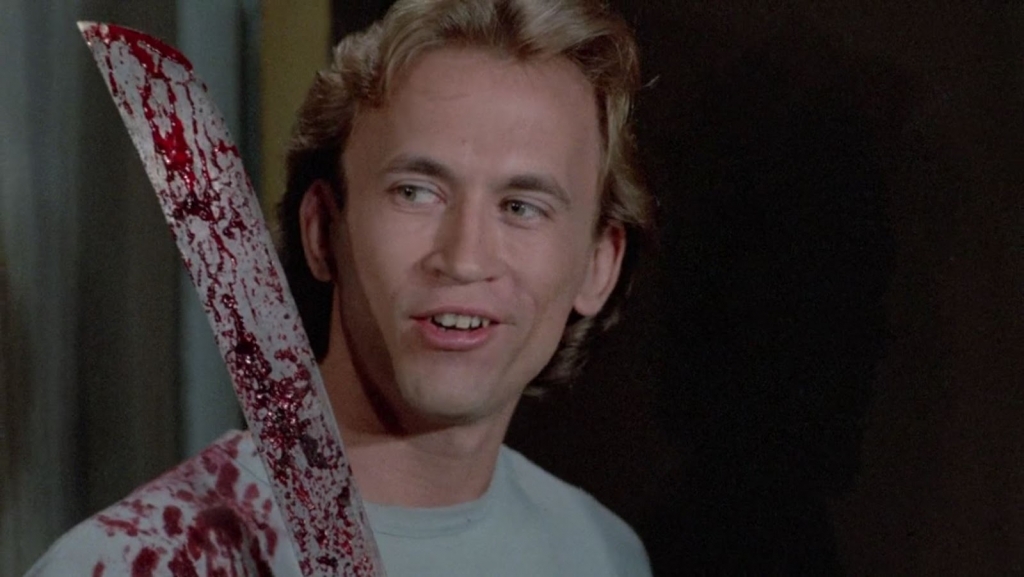 Ten years after Todd is framed for murder by his twin brother Terry, he escapes from the mental institution on Thanksgiving to stop Terry from carving everyone in the neighborhood. Let’s dig into 1987’s Blood Rage, directed by John Grissmer.

Originally titled Slasher, the name was changed for a theatrical release some four years after it was filmed in 1983.

The gore in this film was made to grace the pages of Fangoria magazine — from the odd yet unsettling mid face hatchet strikes, to the hysterical severed hand grasping a beer which was used to great effect by artist Marc Schoenbach (aka Sadist Art Designs) for the Blu-ray slipcover.

The cheesy overacting hits the right frequency to compliment the 80’s feel, and I can even spot some Long Island accents in the cast, by ear. If you close your eyes, Soper’s voice sounds like Jerry Seinfeld. The score is also well done by Richard Einhorn, who is also responsible for Shock Waves (1977), Don’t Go in the House (1979), and The Prowler (1981).

Diving board sex, all the heavy make out sessions you can handle, and a great twist of fate ending are the cranberry sauce on this disassociated slasher. It’s a worthy watch with just a small serving of Thanksgiving turkey.

Mark Soper has such a distinct look, his face plastered on the cover art may be enough to spark familiarity for you. But that’s about it.

However, the most famous face spotted here is what I believe is a Don Post Yoda mask in the childhood bedroom of the twins.

The twins Mother, played by Woody Allen’s ex-wife, Louise Lesser, flaunts some uncomfortable cleavage around her Son. The oedipal vibes are strong and unnerving.

Mark Soper plays both twins and flexes his sex appeal in two different guises. See him as the two-headed, bad boy, killer Terry, and the gentle and misunderstood Todd, who is distinguished by his wet mop, giving it a brunette glow. 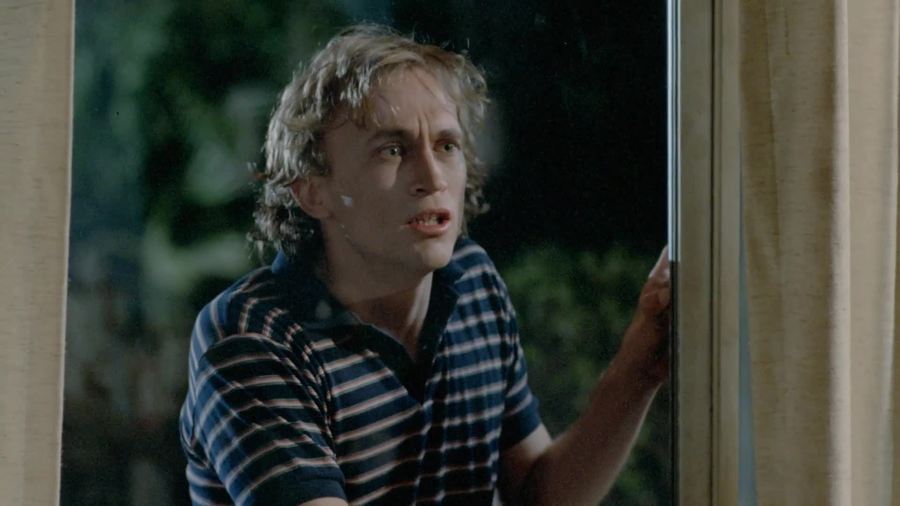 Although it’s not a remarkably high cliff, the film does end on a bit of a hanger. Maybe a remake isn’t in order. But a super fan, who saw value in continuing the story, could surely write something interesting about Todd, still locked up after being suspected for murder, finally living up to the prophecy of his convictions.

No one dared to touch these genetics with the chance of another set of murderous twins popping out.

Released on Blu-ray by Arrow Video, distributor Diabolik has it available, as does Amazon and, surprisingly, Wal-Mart. You can also stream it for free on Prime or Tubi.