This low-rent Sci-Fi horror can’t hang with its sub-genre brethren, but it does have some decent gore and an intriguing premise. Filling the first three minutes with fire over the credits wasn’t enough to keep this fire lit.

Plush with jargon for no good reason doesn’t allow for a carefree entertaining watch. I get stuck scratching my head about attempts to make a pretend space adventure “realistic”. That type of attention only leads to a heavier eye roll once the premise of disappeared planes and boats from the Bermuda Triangle ending up on the dark side of the moon is explained, not taking any orbital positioning into account.

Realism aside, there is a ton of derivative space thriller action going on here, but with only a fraction of the creativity.

Those earlier productions like Alien — which hired Giger and others to develop its monster — and even films like Spaceballs were filled with enough imagination to make up for whatever future predictions they made not coming to fruition. 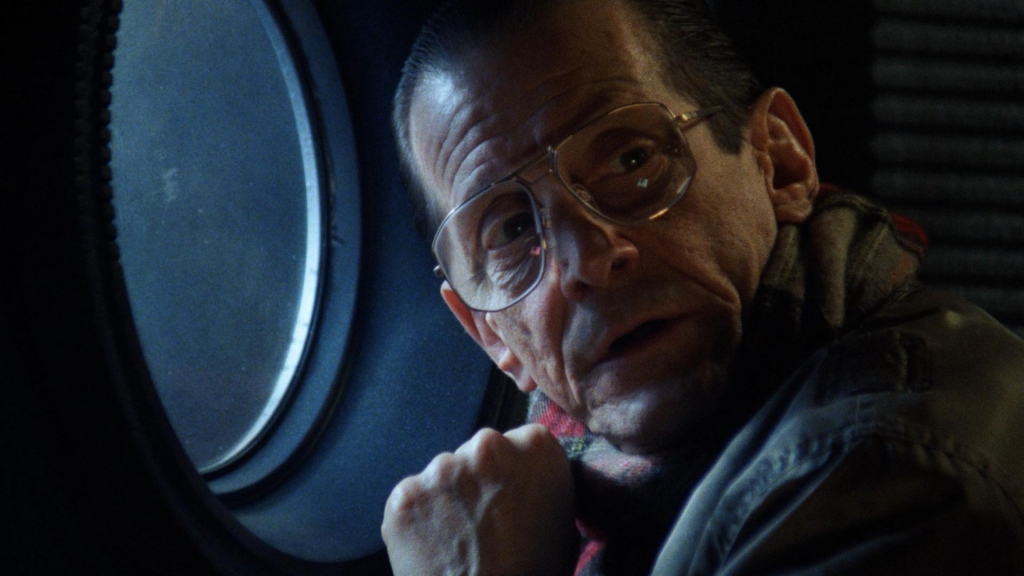 That’s the one thing that sets this film apart from them.

Little did they know then, that in the year 2022, the year the film is set in, there would be a Space Force branch of the U.S. military created by a guy who thought dropping a nuclear weapon on a weather system could minimize the devastation it caused on the earth. Irony is a theme for this generation. So they got that part, sorta kinda, right.

NASA being defunct for thirty-plus years may seem like it was way off. But when you take into account the impotence of that agency compared to private company space missions, it’s pretty spot on.

You don’t normally see diopter shots in a film like this, but they use two and the sets and props are actually pretty good. There are worse space thrillers.

Joe Turkel’s (Paxton) cavernous features were made for menacing characters, none more than his role as Lloyd the spectral bartender in Kubrick’s The Shining.

John Diehl (Jennings) has that face you know you’ve seen in tons of films but can’t place. Be it Kawalsky in Stargate, G. Gordon Liddy in the colossal disappointment that is Oliver Stone’s Nixon, or popping up in a Dig like Mind Ripper.

Camilla More (Lesli) featured with her twin sister Carey in Friday the 13th – The Final Chapter as the skinny dipping twins, Tina and Terri. Dressing Camilla More (Lesli) in a tight leather outfit and having her never leave a chair or be shown in anything but profile (save for one single shot) seems like a waste, but the choice of monster outweighs even that negligence. I’m sure they could have come up with a more interesting beast than the infernal one.

I’m going to give the nod to Camilla More here, looking like a dancer in a Robert Palmer video, but mostly because they made her sit down for the whole film.

The premise is admittedly intriguing. The execution was not. All the vanished vessels from earth ending up on the moon’s dark side sounds like a great conspiracy theory. A bit of low-hanging fruit, but it’s a jump-off point.

Unearthed films released a Blu-Ray which can be had anywhere from big-box chains to Amazon. You can also stream on Plex, Tubi, and Peacock.