“Death Machine” has all the workings to be a cult sci-fi horror film, ripe for rediscovery and a proper US release finally.

A weapons manufacturer tries to cover up its mistakes with a super soldier program while a morally sound executive does her best to uncover their evil plot and the scientist behind it all plots to maim and destroy it all. Let’s dig into 1994’s “Death Machine”, directed by Stephen Norrington!

The directorial debut from Stephen Norrington, and reportedly the effort that landed him the director’s chair for Blade, Death Machine is a good movie with an arsenal of flaws.

Set in the future, which is now past, 2003, we follow the company Chaank that provides military weapons. Their failed Robocop-like super-soldier suit has malfunctioned and caused a slaughter of civilians. Now they’re back to the drawing board, so to speak, though the bottom line is always more important. In steps Scott Ridley who instructs the board they will just be pivoting.

The mad scientist behind the creation, Jack Dante, secretly creates a psycho-death bot named Warbeast. And once the fun starts, this metal death force shreds everyone in its path.

The story has interesting points, such as the evil corporation, the righteous humanist alliance, and the mad genius hellbent on domination. But the acting and script fall off a cliff a little more than halfway through the film. The sets are great, and the animation on the Warbeast is chaotic and amazing, which makes sense because the Director used to cut his teeth in creature effects on films like Aliens and Alien 3.

The homages are off the charts.

Some of the examples I picked up on were sound effects from Doom, Masters of the Universe toys that decorate Dante’s office, a Daffy Duck impression from Brad Dourif, a battle cry from Street Fighter, as well as the Warbeast resembling a Mouser from Teenage Mutant Ninja Turtles. The names of the characters as well are tributary. Some are identical: John Carpenter, Scott Ridley (Ridley Scott), Jack Dante (Joe Dante), Weyland, Yutani (Alien).

There was too much whimsy and cheeky humor inserted for the tone of the film and could have used some fine-tuning. But I feel it was just on the cusp of being a classic sci-fi/horror.

Brad Dourif (Dante): you know him, you love him, he’s everyone’s favorite good guy. He always brings the same quality of maniacal energy and really excels as the bad guy, but no role was as iconic and great as that of our friend Chuck in Child’s Play.

He has since become a Rob Zombie regular (31 and Three from Hell), but Richard Brake (Ridley) showed he has the propensity for villainy in what I felt was an underappreciated role. He really stood out, and it was a shame he was killed off so early as he seemed to have an insurmountable level of maddening bravado.

Rachel Weisz has a brief cameo in this her first feature, and would later go on to star in The Mummy series and marry James Bond. 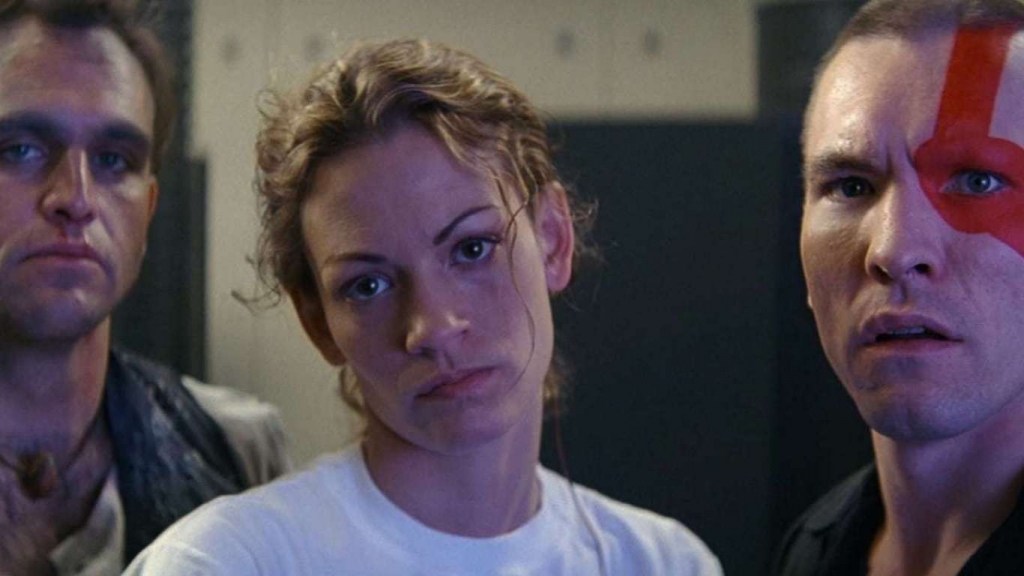 The inclusion of the heartbreaking and gut-wrenching story of Cale’s daughter getting her arm flayed in a garbage disposal does nothing for the greater good of the story. It affords Pouget an opportunity to display another emotion in her repertoire. At this point, however, the script already jumped the shark.

Ely Pouget (Hayden Cale) is a great leading lady for this genre, and her skills are emphasized in the first half of the film. She’s got Ripley’s bad-ass woman card in my opinion, and she’s beautiful to boot. She seems to have hardly aged since 1994 in most recent photographs as well.

This is one of those odd, hardly heard of, 90’s films that deserved better. I know it’s been given numerous cuts and a so-called definitive cut, but it could really stand to use some sound editing and unbiased clipping. It’s not sacred ground, but I would rather it see a clean pass rather than a clean slate.

An uncut Blu-ray was released in Germany (the version I watched). If you don’t feel like paying up for it, you can stream on Amazon Prime, Roku, Vudu, or Plex.