An antique shop owner sells items to different people that all hold deep, dark secrets. Let’s dig into 1974’s “From Beyond the Grave”, directed by Kevin Connor!

I do enjoy a good Anthology, and this is good; it could have been great. I’m in love with the idea of Peter Cushing (who commanded every scene or stage he chose to walk onto) playing the shopkeeper who doles out mechanisms of karmic justice. You will always feel cheated by the laconic wrap-around story, and that regret is heightened with an actor the caliber of Cushing playing around in such an interesting world. He does his best to make those moments count, and the outro made me giddy enough to want more.

So, let’s break down each segment and discuss them briefly.

David Warner stars as Edward Charlton. He dupes the shopkeeper into selling him an antique mirror for much less than it’s worth by convincing him it is a reproduction. He’s paid in kind once the mirror hangs in his house and the looking glass inveigles him and his guests to perform a séance, which invokes a nefarious spirit that controls Edward, convincing him to murder. Edward feeds the spirit with the bodies of courtesans and unwitting suitors in a cheeky sort of explanation for the motivations of England’s most notorious lady killer, Jack the Ripper. Edward fulfills his deceitful destiny as the next resident of his treasured mirror.

A quick story that leaves little time to step on details, but the point gets across quite clear. 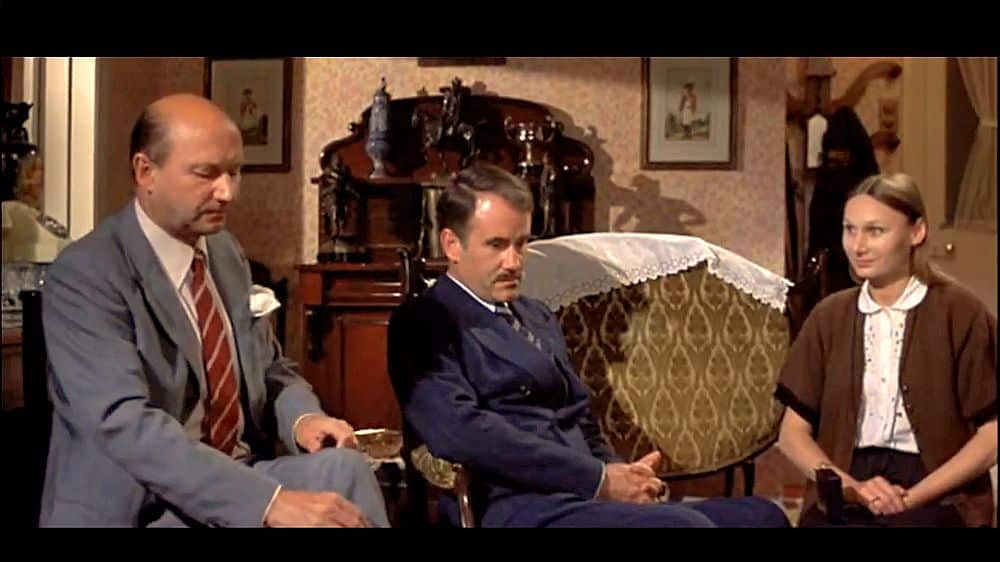 A man unhappy with his life and marriage begins lying to a match salesman, who is a veteran, about his own exploits of war to impress and tries to buy a Distinguished Service medal from the antique shop under false pretenses. He steals the medal and begins a friendship with the salesman (Donald Pleasence). Dinner leads to the salesman’s daughter using a type of voodoo doll to rid the morose man of his marital woes. Free of a legal obligation and now a widower, the man marries the salesman’s daughter, who cuts the cake topper of the groom at their wedding, subsequently leading to his connected demise.

Motive was absent here, beyond the man being full of prevarications, but I understand time and space are at a premium within the structure of an anthology. This segment suffers the constraints.

An arrogant businessman finds his way into the antique shop and changes the price on two snuff boxes, buying the more valuable one for just five quid. On the train home, a crazy psychic named Madame Orloff accosts him, telling him that there is an “elemental” on his shoulder and it’s murderous. Once home, the man’s wife is attacked multiple times by an unseen force, though she believes it was him since there is no one else in the house. Employing Madame Orloff for a sort of exorcism, the man believes the house is clear. But the elemental has taken possession of his wife and leads to his demise.

The least entertaining of all the segments in my opinion. Margaret Leighton (Madame Orloff) plays her character well, but beyond that, I find it hard to buy in. 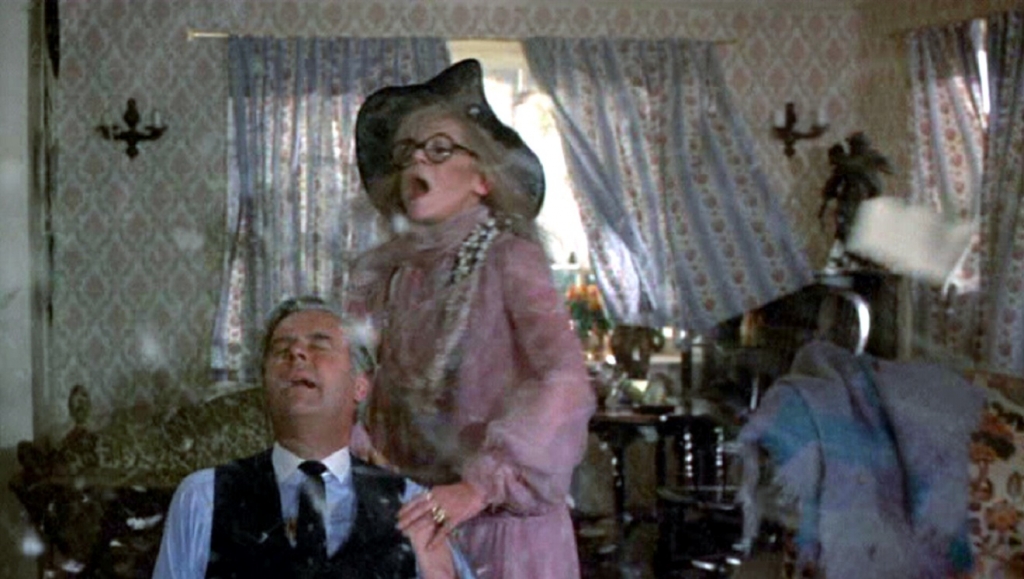 William, a writer, chooses a door from the shop with an ornate demonic-looking relief. When he goes to pay, he can’t meet the price, but the shopkeeper agrees to the money William has left in his wallet. The shopkeeper steps away with the till open, and it’s left a mystery whether William takes the last of his cash back before leaving. The shopkeeper counts the cash as we transition to William’s home while he and his wife have the door installed on a small closet. The story of where the door used to lead is a very elaborate blue room, and this is the exact room the door leads within William’s dream as well. An old Victorian castle-style room adorned in blue. A beautiful set (Shepperton Studios) with cobwebs and clever lighting. The story of its occupant unfolds, and Charles II steps out of a painting with the goal of capturing William’s beautiful wife. Ultimately, William vanquishes Charles. Once we’re back to the shopkeeper, as he finishes counting, we realize it’s because William was an honest man who did not touch the till.

The most visually pleasing segment, it’s clear why they held this for the finale. A last little bang sees us out the door as a thief attempts to burgle the shop to no avail, and we’re shown out with an invitation to return and a promise of a surprise with every purchase.

Whether it’s Baron Frankenstein, Van Helsing, Sherlock Holmes, or Grand Moff Tarkin, there are few more legendary than Peter Cushing. Here, he plays the shopkeeper in the wrap-around story.

Donald Pleasence plays a clean-shaven match salesman, along with his real-life daughter Angela in Segment 2, “An Act of Kindness”.

David Warner has come up in quite a few of the digs and has starred in everything from Titanic to Teenage Mutant Ninja Turtles II – The Secret of the Ooze. Here, he plays the main character in the first segment, “The Gate Crasher”. 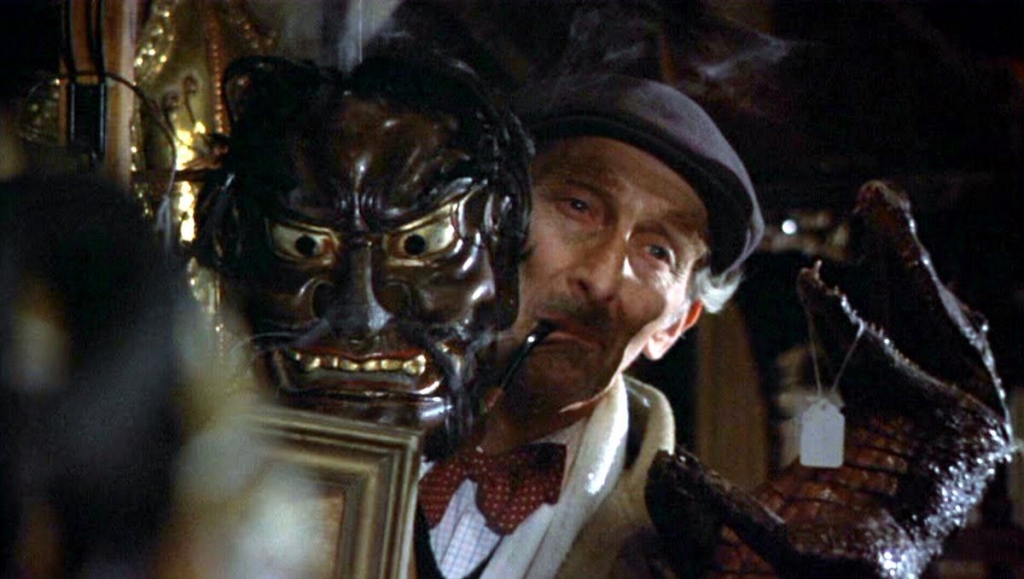 I failed to find any moves that didn’t serve the stories they were trying to tell.

Lesley-Anne Down plays Rosemary, William’s wife in segment 4, “The Door”. She has enchanting blue eyes and a voice as sweet as syrup. She has staved off the pitfalls of aging and held on to her gift of beauty to this day.

Though some may feel the wrap-around story of an oddities and obscurities shop has been used ad nauseum, I never grow tired of it. The menagerie of objects that can bring death and dismemberment is endless, and I dream of taking a phrenic journey into a dark and dingy shop of eccentricities.

All omnibus horror films, especially those of the 1970s, have a common tone and structure — and there is good reason for that. Many of them were produced by Amicus, including From Beyond the Grave. Unfortunately, if this was your cup of tea, they ceased the portmanteau style film with this one, though it lives on in those of a similar vein, such as Creepshow and beyond.

Warner Bros. released a Blu-ray, or you can rent to stream on Apple, Amazon, Google Play, YouTube, etc.