It’s exactly the film it claims to be and will satisfy any fans looking to expand their resume of eighties formulaic teen slashers. 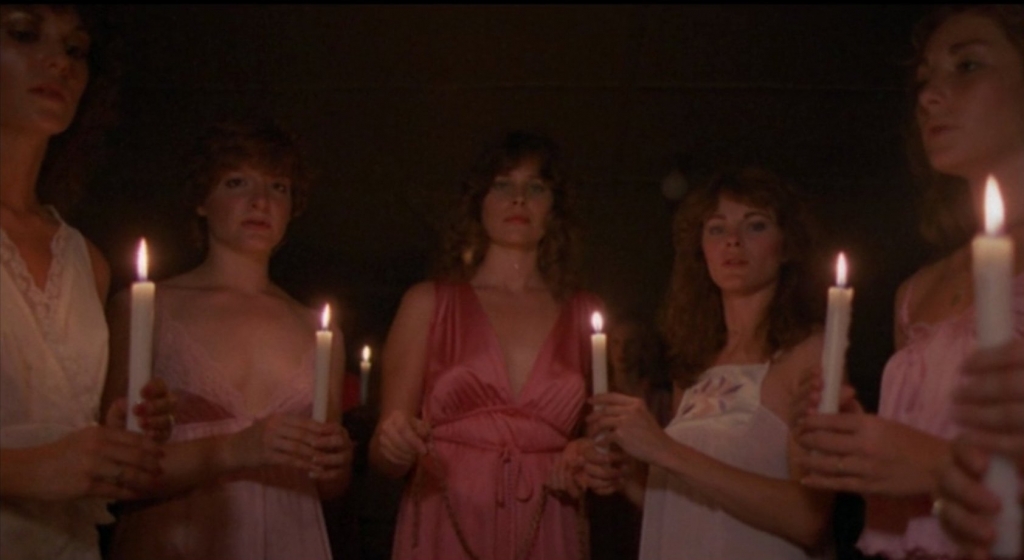 A killer stalks coeds and a sorority pledge who has recurring nightmares that seem too vivid to be just a dream. Let’s dig into 1984’s “The Initiation”, directed by Larry Stewart and Peter Crane!

A slasher horror film, about teens and dreaming, released in 1984? This may be a good trivia night addition since most people will guess it’s the iconic and vastly more imaginative A Nightmare on Elm Street from horror legend Wes Craven and not this attempt to exploit the trend and cash in.

That’s not to say this film is terrible. It’s far from it.

There are plenty of good, but familiar elements throughout. But I do wish more was centered around the mall scenario, as that was when the cast seemed to have the most fun.

Using a writer and director that weren’t previously involved in the genre, or after, is an old trick and one still used today. It lends to the sitcom-like humor.

Daphne Zuniga is great, especially for her first starring role. It’s amazing how quickly she would go on to command the screen with her future performance in one of the greatest (and most reference-heavy) comedies of all time. James Read (Professor Pete) is also endearing and would go on to be the film father in a couple of mainstream comedies (Elle’s dad in Legally Blonde and the sequel).

A worthy watch with plenty of nudity and blood to keep the thirsty crowd satiated.

Clu Gulager (Dwight Fairchild) is Burt the proprietor of Uneeda Medical Supply in my favorite film of all time, Return of the Living Dead.

The title bills it as an “Introducing…” credit, as this is Daphne Zuniga’s first starring role. Soon after, she would become a Druish princess in the best spoof film of all time, Mel Brooks’ Spaceballs.

Can it be an eighties movie about coeds without having a group shower and grooming scene?

Hunter Tylo (Alison – credited as Deborah Morehart) was a local actor in the DFW area cast in the film and went on to become a prolific and renowned soap opera actress, starring in almost twenty-five hundred episodes of The Bold and the Beautiful. She’s spot-on in her role as a sexually charged slasher victim, and it’s no wonder her aesthetic got her cast on several soaps. It’s formulaic while not adhering to the pacing guidelines. And that doesn’t necessarily make it unique, just flawed. Surprisingly, there are now enough abandoned malls that you wouldn’t have to wait for nighttime to shoot inside, but it’s all just nostalgia and retro cash in to try and remake something like this.

There is no official sequel or remake, but the 2020 film Initiation shares more similarities than the title. Also set during pledge week and featuring a killer stalking coeds, it’s hard to argue that was an original idea.

Arrow Video released a Blu-Ray with a new scan and interview. It also features new artwork from Fright-Rags master artist Justin Osbourn. You can also stream on Tubi and Arrow, or rent to stream on Amazon, Google Play, YouTube, Apple TV, and Vudu.