This is America; where real patriots kill you to make sure you bleed true, red, white, and blue — and “Uncle Sam” is leading the way. A soldier who enlisted voluntarily in the military is killed in action and comes back for revenge against all his countrymen that he deems less patriotic than himself. Let’s dig into 1996’s “Uncle Sam”, directed by William Lustig!

It is meant to be tongue in cheek, for the most part.

That doesn’t mean Larry Cohen didn’t throw in a few shots to the high-ho, flag wavers who celebrate the simple luck of being born in a specific geographic location.

If you think the overzealous recruitment of nine-year-olds for a future spot on a kill squad is nothing more than love for your country, you are no better than any ruthless dictator throughout history. That is the point of the film, though Larry Cohen — always one for camp — surely saw an empty space for holiday horror with a lack of July fourth slashers.

There are some creative kill scenes, mostly centered around summer activities like barbecuing. This is the second film for the Dig in as many weeks that someone ends up impaled on the end of an American flag. 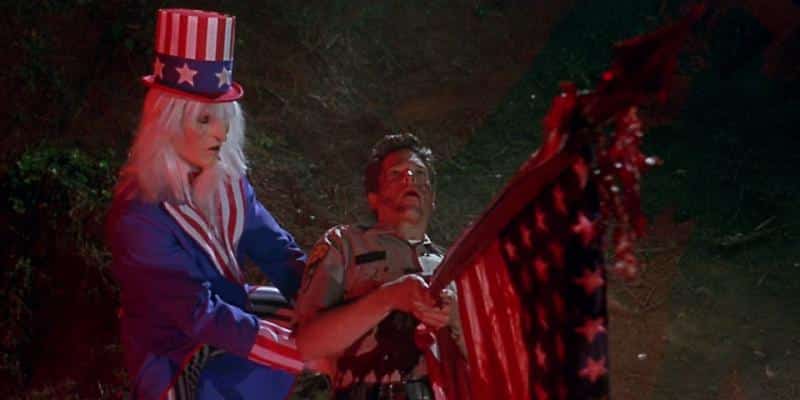 The ending is highlighted by a long full burn and an ode to the recently (at the time) deceased Italian horror master Lucio Fulci, as the final image breaks away like shattered glass just like the end of City of the Living Dead, which also featured some full burns.

The young boy burns his GI Joes, as if they’re state-sponsored recruitment tactics, now that he’s disillusioned with the industry of killing.

And the credits play out, not with a song but with a poignant poem that confirms Cohen was not doing this to rally troops but as an honest portrayal of what holding a gun and aiming it at someone really means: murder, death, kill.

This legendary musician enjoyed fame in multiple mediums, becoming the eternal voice of everyone’s favorite school Chef in South Park. Isaac Hayes (Jed) had a prolific acting career as well, and I can recall his distinct voice with little effort.

The late Robert Forster had a sizable resume. But as for genre, you may recall him from an earlier dig Alligator or the resurgent Twin Peaks in 2017 as Sheriff Truman.

Timothy Bottoms (Mr. Crandall) starred in the World War I epic Johnny Got His Gun written and directed by screen legend and parrot enthusiast Dalton Trumbo. It featured such renowned actors as Donald Sutherland and Jason Robards. Most recently, he played the grandfather in Frank Sabatella’s vampire flick The Shed.

I can’t argue with being disgusted by the teens spray painting swastikas on the headstones.

From the early eighties during the hardcore punk era, the swastika held an odd rebellious taboo that led the neglected youth to put it on their leather jackets or tattered white t-shirts. It didn’t always mean they were Neo-nazis. But almost one hundred years on, that symbol of a hatred movement — which was plucked from being a universal cultural symbol of luck — can still illicit major discomfort, even indirectly.

Do keep in mind that Larry Cohen was Jewish, and I don’t think you can say he was doing anything besides commenting on that same cultural phenomenon I was mentioning, albeit briefly.

Maybe it’s the era I grew up in, but seeing practical makeup that looks so damn good made the whole movie for me. It makes sense being that Ron Knyrim and the folks at SOTA fx handled duties. He’s responsible for memorable creature designs from the Halloweentown films and many, many more.

There are undeniable parallels between the sentiment in this imaginary film world from the mid-nineties and the world we ended up living in, in real life. You could easily re-animate the crispy corpse of Uncle Sam and give him a contemporary spin.

Though there were reports that A-Pix wanted to get a sequel going, nothing ever came of it.

Blue Underground put out a Blu-Ray that is available on Amazon and quite affordable. You can stream on Shudder, AMC+, and Tubi.