Though filled with grief and depravity, there is an undeniable heartbeat to “Whoever Slew Auntie Roo” that harmonizes well with the holidays. 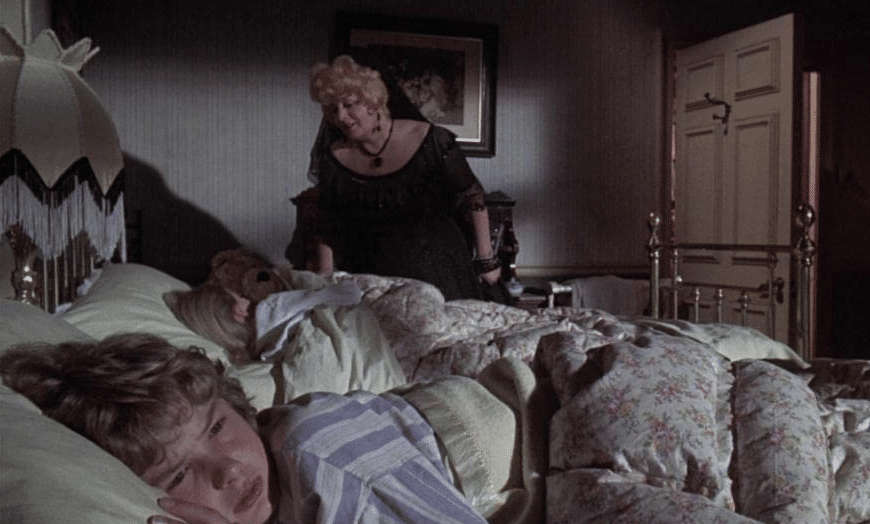 A bereaved Mother holds an annual dinner for local orphans, but when one of the children reminds her of her departed daughter, she can’t bring herself to let her go. Let’s dig into 1972’s “Whoever Slew Auntie Roo”, directed by Curtis Harrington!

It’s hard to pinpoint who the protagonist in the story is by the end of it all. Shelly Winters as the titular Auntie Roo naturally should be the villain. There is no condoning holding a child against its will no matter your level of anguish, but it is nearly impossible to not feel for her. Her kindness comes from grief but also a genuine source of altruism.

Meanwhile, she’s surrounded by thieves, charlatans, and children who hear lullabies to kill by in their head.

The trailer asks, “When does the fairy tale become a nightmare?”. For Auntie Roo it’s the moment she let little Christopher and Katy into her house. Yes, she’s figuratively haunted by the ghost of her Daughter who passed accidentally. Yes, she keeps her corpse in a nursery in the attic, looking like a miniature version of Norman’s Mother. Yes, she’s mentally unstable. But Christopher is the true psychopath here.

His inner monologue recites the Brothers Grimm tale of Hansel and Gretel, which he apparently took as a true story that cautioned him to be wary of any Woman in an apron willing to cook him a hot meal. 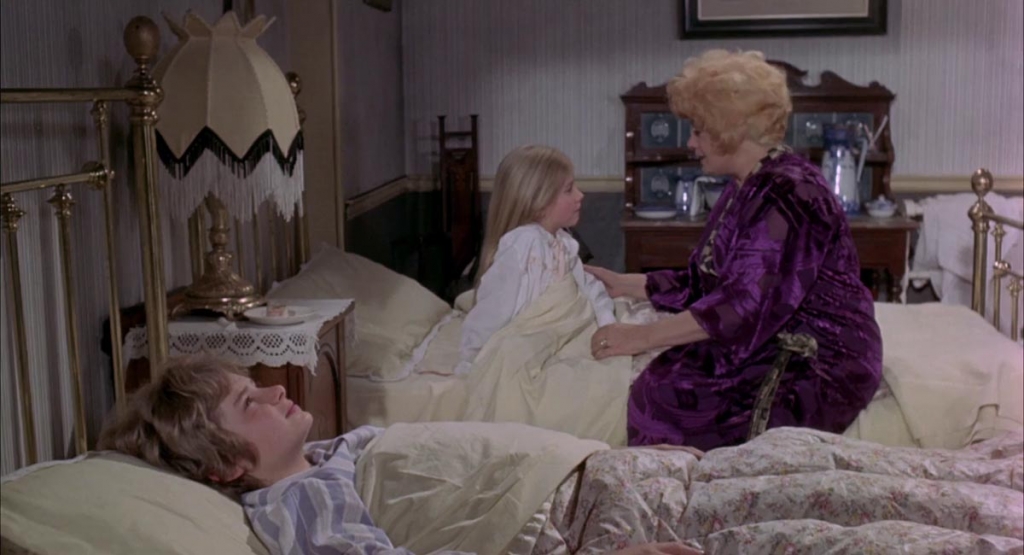 Her grief is also monetized by a fake medium (they’re all fake, for the record) who plants inside people to trick her out of her money, believing to be able to communicate with her late child. I’ve worked backstage for more than a dozen “performances” by a modern medium and have seen firsthand the way they manipulate people in pain. There’s no excuse for it (maybe this should qualify as gratuitous), not even the lie that they’re “helping” heal.

Rant over. But it still stands that from a hoaxer, to a conniving butler, to a murderous schizophrenic child, Auntie Roo is the victim here.

As for a horror element, besides the dread of being burned alive, there is a beautiful Magician’s menagerie about halfway through the film that is filled with some fantastic old school props. Theater costumes and guillotines and creepy puppets. It’s brilliant set design.

So, with this — and Christopher’s cretinous smile as he rides off with loaded pockets at the deficit of Auntie Roo — I bid you adieu until 2021. Enjoy your Horrordays and stay Spooky, Kids! 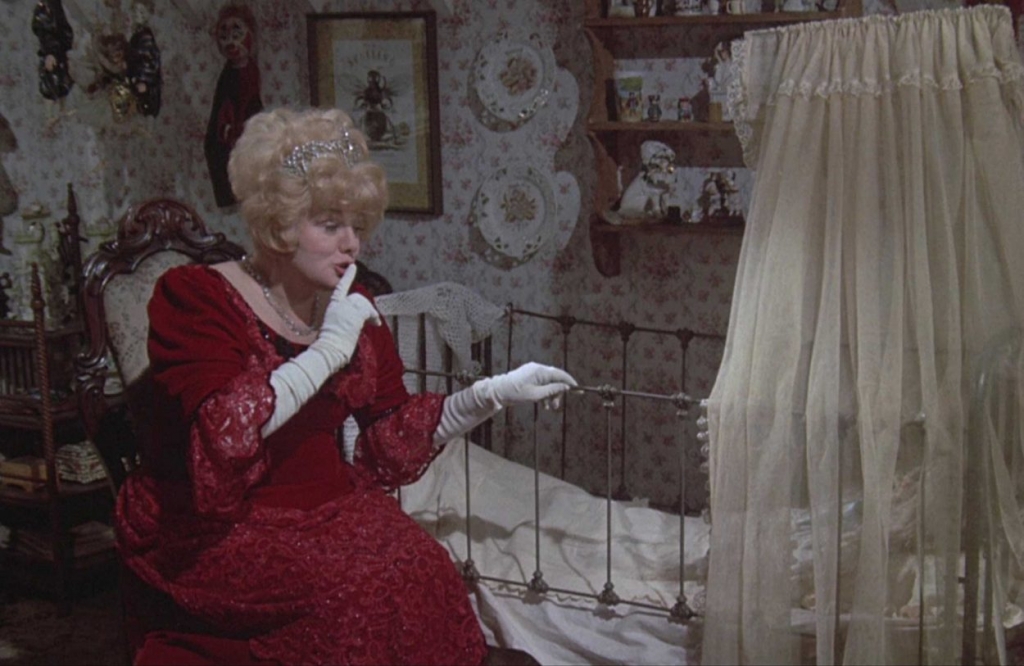 Shelley Winters — from her work with Bob Hope, her role in Pete’s Dragon (1977) or as the brazen but lovable Nana Mary in Roseanne — is quite a recognizable face. Personally, it’s her role in The Poseidon Adventure (1972) released the same year as this film, that sticks out for me. Winters defied gender, age (she was 52 at the time), and size constrictions to depict a truly valiant sacrificial hero. I recall vividly the emotional affect her character’s demise had on me as a kid. If you have a taste for something non-horror, Poseidon is a good watch and stars Gene Hackman as well.

While the evil nature serves the character, Albie is so overwhelmingly avaricious and vile that he jumps the shark.

It’s grief that pulls at the heart in this one. Perhaps in my own role as initiator of life, I’ve developed a way to empathize even in the adverse pathology of mania. 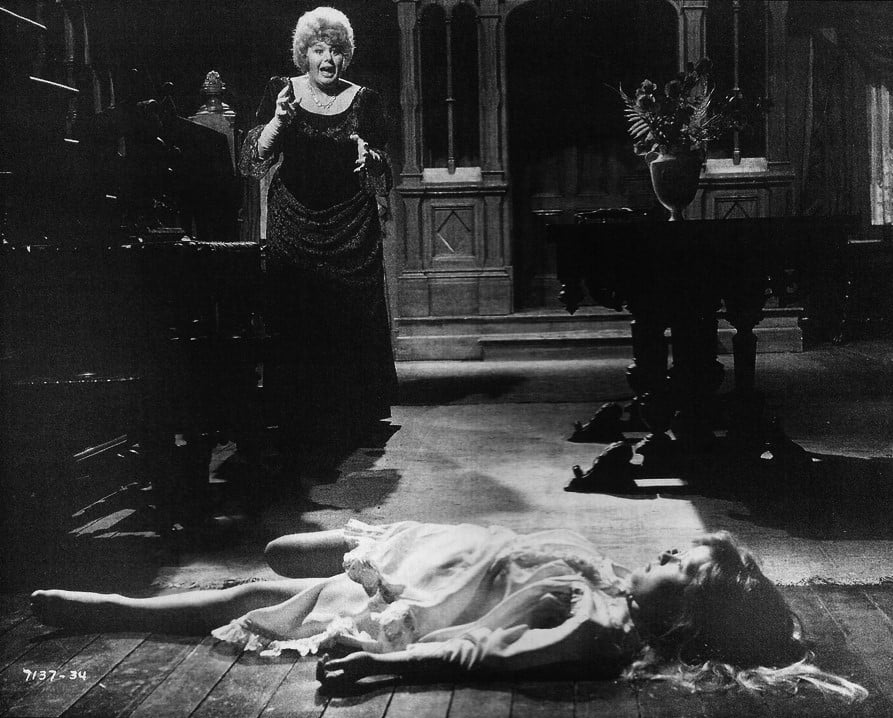 Dialing down the deplorable nature of, well everyone, would serve another go at the story. There’s true emotion at the root of the tale, and when you have that you can always build out. Tying the amplified sorrow to the Christmas season as well would make for a great Christmas horror.

Whoever Slew Auntie Roo? Is available to stream on Amazon Prime, Epix and DIRECTV, and a Blu-ray release from Kino Lorber.