The Conjuring: The Devil Made Me Do It (Review)

Moving at a brisk pace and delivering satisfying scares, “The Devil Made Me Do It” is far from bad — but it’s not as good as it should be. 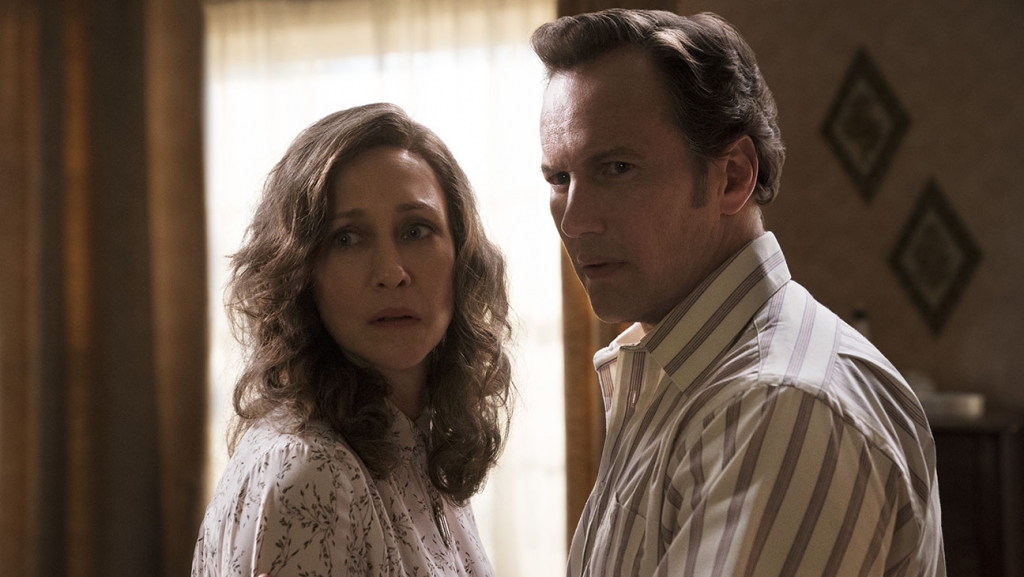 In 1981, there was an interesting development in both the world of the paranormal and of the legal system: nineteen-year-old Arne Johnson was put on trial for the murder of his landlord. After a heated exchange, Arne stabbed the man 22 times with a pocket knife.

Now, this starts out sounding like your average high-profile murder case. A real-life killing and real-life shock and awe at the grisliness people are capable of. But what really shocked the nation was Arne’s groundbreaking defense. With no irony whatsoever, Arne pleaded not guilty by reason of demonic possession.

In short, the devil made him do it.

That was certainly a first for the American justice system. So, before we talk about the film, let’s dig into a bit more of the background behind the controversial case the film is based on.

Months before Arne’s trial, there was supposedly an exorcism. The possessed in question was a young boy named David Glatzel. In comes famous (or rather infamous) paranormal investigators Ed and Lorraine Warren. According to the story, Ed and Lorraine performed the exorcism, but it was a difficult task, resulting in the demon instead taking up residence in Arne, who was present because he was in a relationship with David’s older sister, Debbie.

Was Arne possessed or was this just an elaborate defense assisted by a couple who made a name for themselves substantiating outlandish claims?

Intentional or otherwise, that’s where the third Conjuring film gets its true hook by forcing us as audience members to reflect on what we really believe.

The previous two Conjurings are master classes in building suspense and delivering on a spooky premise. 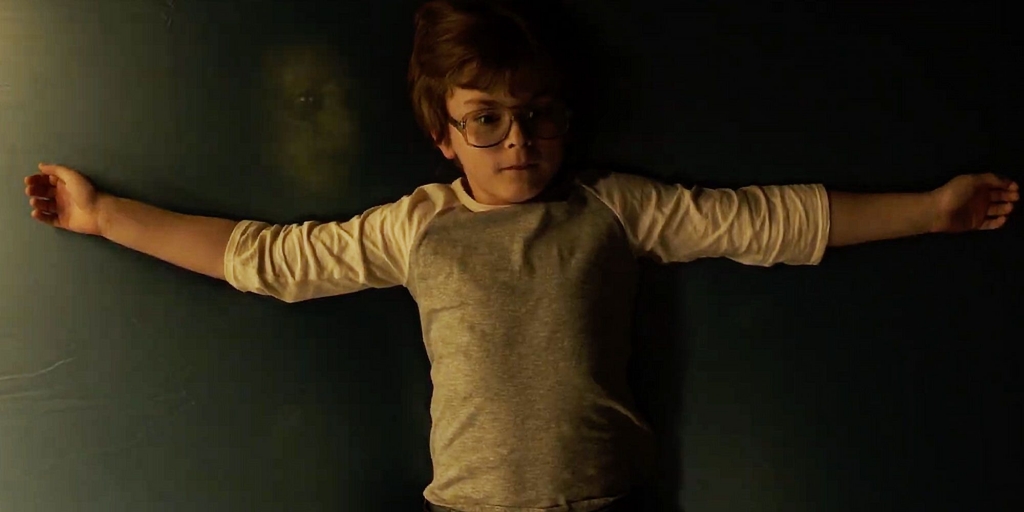 What I’ve really admired these films for is something I don’t people talk about enough. Where they shine is in is their attempt to present these supernatural events as factual and true to life. This is a brilliant narrative device because, if all this scary stuff really happened and you believe everything you’re seeing on screen is real, it only makes the viewing experience that much more terrifying. It means something like this could very easily happen to you. And all you’d have to rely on is the grace of God and (if you’re lucky) some people who are good at ghostbusting.

Of course, we know a lot of the story elements, if ever based on anything factual at all, have been fabricated. Nobody’s out here thinking a demon nun was really involved with the Enfield poltergeist. But hey, it’s certainly scary and makes for some good entertainment.

The validity of the Warrens’ claims is an ongoing subject of debate.

At first, I thought it was a silly choice to take Arne’s case as the subject of the third story — especially since this is a case where someone was actually killed. But upon watching it, I’ve realized it makes a lot of sense to choose this story. This set of events, even more so than those of the previous two films, is perfect to use in a way that joins reality and horror fantasy.

We have a murder possibly caused by demonic influence. Then we have the media storm that followed, which left everyone questioning their faith and how much influence that faith could potentially have over us — both willingly and unwillingly.

So many people forget that belief in God goes hand in hand with belief in the Devil. Yet, it is quite a challenge for many religious people to swallow that someone could claim Satanism and get away with murder.

Despite these intriguing spiritual conflicts, the movie ultimately focuses on the wrong things, and the third Conjuring just doesn’t reach the frightening heights of the first two. 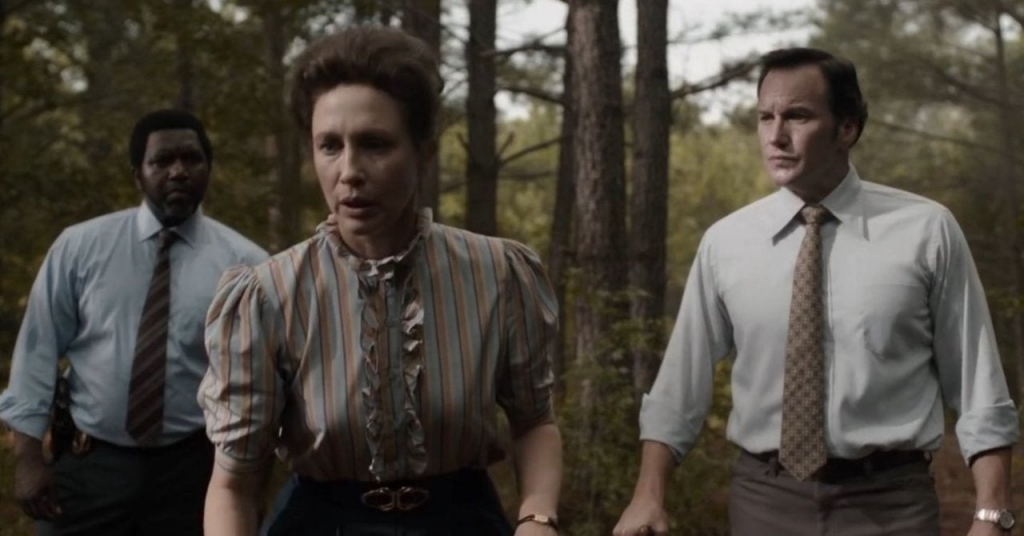 It’s scary enough, but a quicker pace and a conventional look (rather than the absorbing 70’s aesthetic of the first two) renders the whole thing a bit more generic. I’d argue it’s still worth your time, but now Ed and Lorraine’s saga feels a bit watered down.

Taking over from director James Wan is Michael Chaves, who was assigned the job after his work on the hilariously over-hated Curse of La Llorona.

The movie is well-directed and well-shot.

My favorite sequence centered around Lorraine in the forest, having a vision of a murder that recently took place while she figures out its connection to Arne’s possession. It’s a trippy, heart racing scene that concludes with Lorraine hanging precariously off a cliff.

Just like Conjuring 2 did with Valak, we are given a culprit more suited to a crazy horror story. This one ain’t bad, but it doesn’t hold a candle to Valak (and to be honest, involves a rather lame twist).

Further, some distracting plot holes take away from the enjoyment. For example, Arne demands the demon let David go and take him instead, gets possessed, and just…… sits on it. Shouldn’t you give Lorraine a heads up? Stay in contact with her and Ed? Call the Vatican? Avoid eating pea soup?

Not only is it silly, but it also builds a decent case against Arne. In real life, months went by after David’s supposed exorcism. Months knowing a demon was in you. You’d think after a week, you’d have gotten bored of all the creepy Latin getting whispered in your ears. Do something, bro.

Patrick Wilson and Vera Farmiga’s chemistry keeps everything together and the audience invested. But for now, with two great films and an enjoyable but only okay third, maybe we should slow down on “Conjuring” sequels and let some spin-offs breathe for a while.

No matter what you believe, The Conjuring: The Devil Made Me Do It is a jumpy good time.

It does what it needs to do: give us more of Ed and Lorraine facing off against the monsters under the bed.

No, it’s not as good as the first two. Is that a disappointment? Eh, maybe. Personally, I think it’s more about having realistic expectations. For me, there hasn’t been a bad film released in the Conjuring Universe. Even The Nun and the aforementioned La Llorona were worthwhile little fright fests. They certainly weren’t horror classics. But a forgettable film isn’t necessarily a bad one.

The Devil Made Me Do It wraps a fictional narrative around a real incident, just like the ones that came before it. This time it’s not done quite as well, but it did make me think about the scary side of faith and the divide between truth and fiction. I just wish it had taken a more interesting angle to tell the story.

While it’s not a horror masterpiece, especially when compared to its predecessors, The Devil Made Me Do It is worth a watch and should definitely be appreciated for its positives. It’s enough to make you ask yourself: what do you believe?