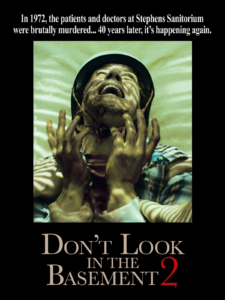 I received a fun package in the mail from Legless Corpse Films and finally got to see a movie I’ve been waiting for. What makes Don’t Look in the Basement 2 cool to me is that it’s done as an homage to the original Don’t Look in the Basement from 1973. I saw the original movie at a drive-in, way back in high school; Black & White, super low budget, but scary as hell. (Ok so that ages me – it’s also the same drive-in where I saw the first Texas Chainsaw Massacre!)

Don’t Look in the Basement was widely released on a double-bill, back in the 70s, with Wes Craven‘s The Last House on the Left, where we were reminded in our cars: “To avoid fainting, keep repeating to yourself: ‘It’s only a movie.. it’s only a movie’! Don’t Look in the Basement 2 was directed by Anthony Brownrigg- the son of the late, great underrated filmmaker S.F. Brownrigg who made the original movie.

Don’t Look in the Basement 2 is a terrific movie on its own, but is also a great sequel that shows the love and heart that Anthony put into it, in his effort to do justice to his father’s cult classic. Brownrigg brought back an original cast member, (who played a different part back then) Camilla Carr to play Emily, the director of the institute. He also went back to where the original was filmed, Trinity Institute in Tehuacana, Texas, where the building itself lends an eerie feeling, you couldn’t get by using another location.

Plot: In 1972, the patients and doctors at Stephens Sanitarium were brutally murdered. 40 years later it is reopened under the name Greenpark Mental Institution and Sam, the only survivor of that terrible day, has been admitted there as a new patient. Sam returns only to find the ghosts of the past have not been resting in peace. As soon as he gets there, the new staff and patients start acting strangely, (mysteriously like the murdered inhabitants from the past) and people start to die. Sam seems like a nice calm lobotomized guy who just loves to draw boats. If Sam isn’t behind these strange happenings and murders, then who is responsible?

The movie is full of great new characters: Andrew Sensenig stars as the sad new psychiatrist, Dr. William Matthews, Frank Mosley as Dr. Lance White and Arianne Margot as Dr. Lucy Mills. Megan Emerick, who co-wrote the screenplay with Brownrigg, plays a supporting role as Nurse Jennifer. Jim O’Rear and Scott Tepperman are our goofy comical orderlies Billy and Bishop. Willie H. Minor, Jr. plays Sam Withers, the returning patient, and Camilla Carr plays the bitchy Emily. Both Sam and Emily’s characters will have their pasts revealed in sinister ways. Minor plays the character Sam as amazingly as the original actor, the late Bill McGhee did, and you can tell he did his research! I love that they use a few flashbacks from the original movie to set the tone and we see many of the original characters manifest themselves when the staff and patients start behaving, well, not like themselves.

I really enjoyed everyone in the cast; good acting all around. I especially thought Billy and Bishop were great as the funny orderlies. They managed to be great comic relief without being too over-the-top goofy. The movie, billed as a supernatural thriller, gives us quite a few twists and turns, kept me pretty much on the edge of my seat, gave us some grisly scenes and a surprise at the end that I didn’t see coming. I got a few things right and was totally wrong on others, but it kept my interest and I think it will yours too.

If you really loved the first movie, you will love this one too. If you never saw the original, this film stands on its own. Don’t Look in the Basement 2 is available on to purchase DVD/BluRay from LeglessCorpseFilms.com or is available on Video on Demand.