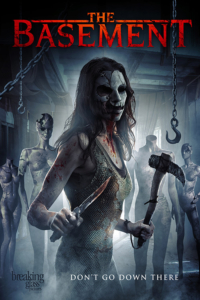 While the premise of László Illés’ The Basement offers very little in terms of originality or genuine horror, the film does feature a few scant moments that might elevate the found-footage picture into the above-acceptable range. Unfortunately, with a worn-out plot, inconsistent performances, and lackluster setting, there’s very little to recommend here.

The movie centers on a group of international students drawn to a mysterious basement within the bowels of a Hungarian city. There, after performing an ill-advised seance, the group suffers the inhuman wrath of the very entity that they summoned from the great beyond. The demonic creature (Marina Gera) is actually one of the few highlights of the film, and it is this character that gives The Basement its slight edge.

The pre-credit scene in the film is probably the strongest out of all the scenes in the entire runtime; the atmosphere is chilling and fun, the lighting is sinister and eerie, and when the blood sprays it does so in a cartoonish and macabre fashion.

At this point, the movie appears to have all the right pieces in place. But The Basement begins its downward spiral from there. Several scenes in the film fail to make sense, generate interest, or cause suspense. The opening party scenes are tinged with a strange purple-pink glare that looks amateurish, while the dialogue (from a script written by Gera Laszlo Krisztian) offers not a single memorable line or intrigue.

Whatever back-stories the characters have are limited. The found-footage cinematography, while inconsistent at times, is handled fairly well, but the imagery captured by the roaming, uneven lens is rarely scary or interesting. The group of students is equally unmemorable, although Suzie (played effectively by Caroline Boulton) is a spirited presence and serves as the catalyst for some of the narrative’s mayhem.

In a low-budget, indie feature of this nature, audiences can only remain patient for so long; had The Basement built to a stunning or surprising climax (like in The Blair Witch Project, Paranormal Activity, or even The Devil Inside), then the earlier scenes might have made more sense or at the very least been bearable.

These criticisms are not to say that the film is not without some merit. While the cardboard characters don’t help matters, some of the picture’s special effects are quite graphic, with ample blood flowing and lots of fresh, gaping wounds. The soundtrack pulses and slices its way to the climax and helps to increase the few scares that pop up within the short running time. Perhaps, with a stronger script, more unique premise, and more characters to root for, The Basement could have made a healthy addition to the plethora of found-footage films that tell a near-identical story.

Released by Breaking Glass and High Octane, László Illés’ The Basement contains a few bright spots amidst the predictability and generic horror, but not nearly enough to register on your spooky-season radar.