When you boast an almost unreal line up of short films like the Etheria Film Night did on Saturday, April, 2nd, during the Days Of The Dead Horror Convention, it’s hard to understand why an alarming number of female filmmakers find it difficult to obtain work. Unfortunately these claims are statistically backed, with many of us either witnessing the harsh and misguided absence of opportunity, or being victim to this.

The eight selected shorts I experienced during the Etheria Film Night Shorts Block and Panel were crafted with great talent, each bringing the gifted vision of their creators to light. I was greatly impressed with the eclectic array of stories and technical skills on display, and there wasn’t one short film I disliked or was not greatly entertained by. 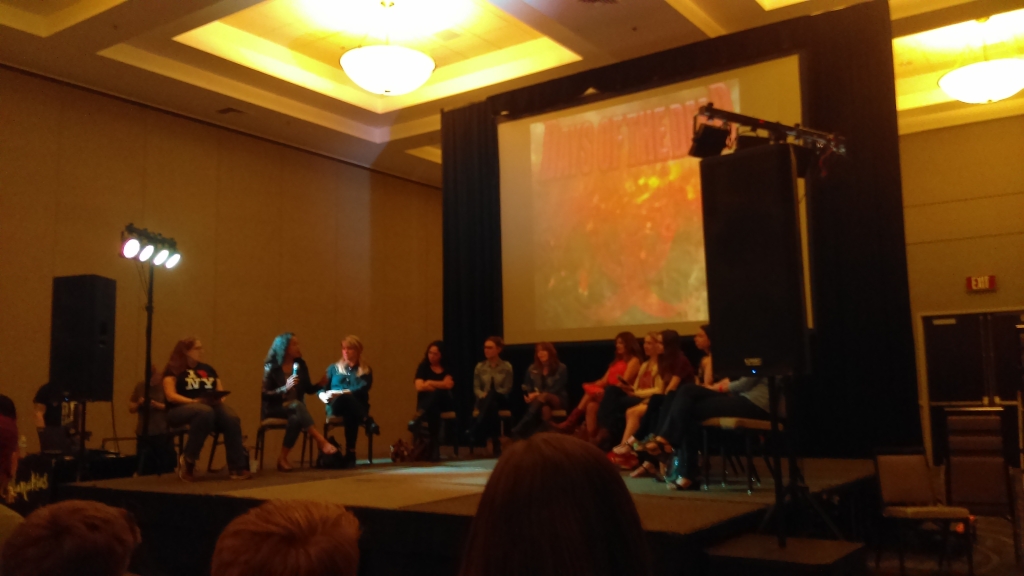 For those unfamiliar with what Etheria is all about, please let me enlighten you. The uncommon and determined call to arms was established in 2014 by the astounding team efforts of Heidi Honeycutt, Stacy Pippi Hammon, and Kayley Viteo. In hopes of continuing to give opportunities to women genre filmmakers (much like the Viscera Film Festival has done), Etheria sponsors an annual film night and several other events around the country designed to help promote the talented women in the industry.

Heidi, Kayley and Stacy are all alumna of Viscera.  Heidi served as Programming Director, Kayley her Assistant, and Stacy headed the Community Outreach.  ETHERIA was at one time, only a side project for Heidi, focusing on Sci Fi and Fantasy.  All the beloved genres were then addressed when a void was left, Viscera somewhat disbanding.  The gals jumped on the opportunity to expand, never wanting to compete with the like-minded showcase offering further opportunities.  This is the birthplace of ETHERIA, and what it is today.

Etheria has evolved into much more than simply a platform to champion fair representation among the sexes in Hollywood. It is a vast network of passionate, skillful, and knowledgeable fans and filmmakers — all connected in hopes of achieving equality within the entertainment industry. It’s exactly what we need more of, in my opinion…sisters in cinema whom look out for one another, hire fellow female crew members, share expertise, and provide encouragement and feedback. 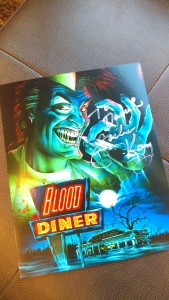 Women have always made significant contributions to film. The first known credited female director was way back in 1896 with Alice Guy-Blanche. 1928, years before the animated ROBIN HOOD from Disney, Lotte Reiniger Directed and wrote the screenplay for The Adventures of Prince Achmed. Ida Lupino made her permanent mark in history with her success in the fifties in film noir productions, although she is most widely known for The Hitch-Hiker from 1953. Penny Marshall was fortunate enough to head a number of popular films during the 80s and 90s, with Sofia Coppola also enjoying similar success. Jackie Kong pushed buttons and gender issues with her brand of over-the-top, low budget films (such as Blood Diner) that were heavy in good ol’ gory fun. And Mary Harron guided the unforgettable film adaptation of Brett Easton Ellis’ uncompromising novel, American Psycho.

However, it wasn’t until 2009, with The Hurt Locker and Kathryn Bigelow, that a woman won an Oscar for Best Director. 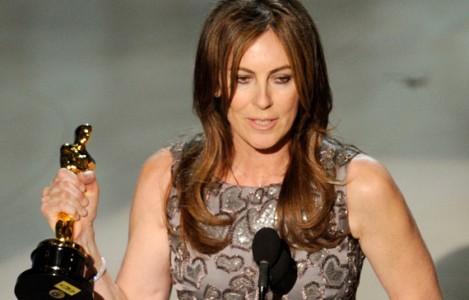 Kathryn Bigelow, the first woman to win an Academy Award for best director

I haven’t even touched upon the contributions within writing, producing, and the camera department that women have been responsible for. It’s disappointing to see the achievements made by women in film be stifled and forgotten, but it’s more maddening to realize the number of opportunities for women in film has not significantly increased throughout our cinematic history.

It’s up to us as fans, and as a community, to help show support whenever possible to the various endeavors highlighting the creative contributions to film made by women.

That’s what Etheria is about, and that’s why it was an honor to be a part of this event…why I traveled from Austin, TX to LA to help support those sisters in search of their rightful place within this world. It was inspiring being surrounded by women who live and breathe film, storytelling, photography, and of course horror…who possess the powerful and innate need to share their stories, their art, and sometimes their heart and soul. 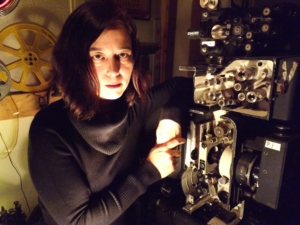 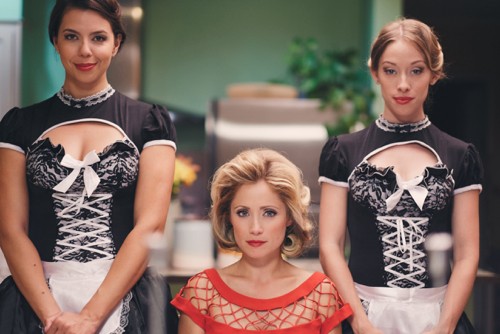 Other filmmakers also utilized darkly comic scenarios and dialogue in their shorts. Amber Benson (from Buffy the Vampire Slayer fame) gave the audience a sharp and well-executed look into the revenge fantasies of three friends, all less than satisfied with their boyfriends, with the aptly entitled SHEVENGE.

Comedy ensued with CARVED by Mary C. Russell, about four young women who offer inebriated insults and insights after they accidentally hit a police officer in the middle of nowhere on a desolate highway, as well as with A TRICKY TREAT by Patricia Chica, a three-minute glimpse into a family Halloween gathering with a very unexpected twist. 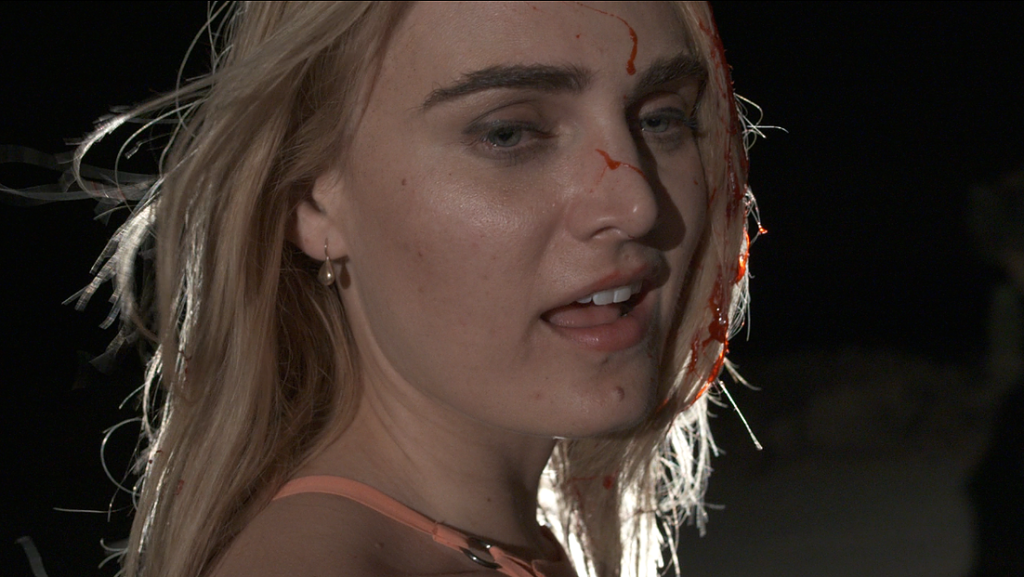 On the other end of the spectrum was ZONE 2, directed by Anna Elizabeth James. This was a taught thriller about a young, impaired man living in an underground bunker with his mother. James creates a great sense of implied doom as the young man begins to ask questions about the outside world. As he finally starts to display some independence and overcome the difficulties of being wheelchair-bound and blind, his mother begins to react strangely. Another darker entry was AS HUMAN AS ANIMAL by Kristina Klebe, a gritty depiction of a man consumed with grief and guilt, starring Diamond Dallas Page. 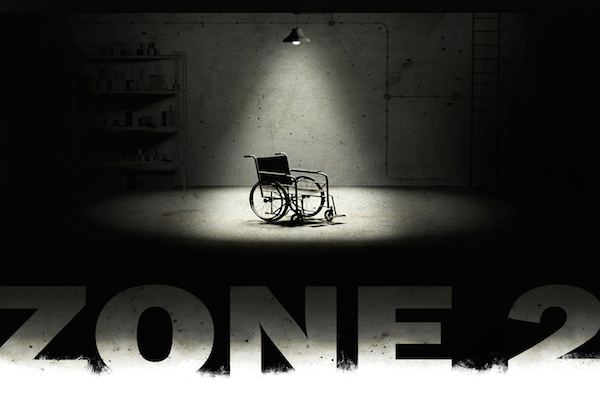 One of my favorites of this fest was Chloe Okuno‘s SLUT. Clocking in at 20 minutes of running time, it was the longest selection. However, it was not long enough in my eyes. It was just pure cinematic goodness that deserved the time needed to fully convey the lonely young lady’s tale. This powerful short tells the story of a socially awkward teen who, under the illusion that if she would just dress ‘sluttier’ she could garner the male attention she so desperately craves, ends up with more than she bargained for.

Finally, Director Barbara Stepansky displayed a confident command of the camera with her amazing film SUBSTANCE, showcasing impressive technical expertise and a high production value. The film follows two young women on the way to an outdoor electronic music festival, situated in a breathtaking snowy tundra. Mistaking a bottle of unidentified alien matter for an average bathroom item, one of the girls comes in contact with a body-altering substance. What follows is an outbreak of strange behaviors, beginning with a carnivorous craving, which promises to quickly become an epidemic. This film was, in short, awesome. I could easily see it being turned into a feature film, and Stepanksy clearly has the goods to produce some really beautiful and elevated genre entertainment.

The curated list of films at this year’s Etheria Film Night, was the perfect testament to female achievements behind and beyond the camera. It was a wonderful mix of laughs, blood, terror, and just plain fantastic storytelling. I was in awe and further inspired to help actively promote, share, and enjoy the great films created by women. More importantly, it reinforced the need to help create more opportunities for our sisters in cinema, to mentor potential contributors and help cultivate the skills needed to find success in the industry. We need a group effort to get more girls gigs in genre cinema!