More than 24 hours of genre classics shown in a historic theater with fellow film nerds is the very definition of horror heaven.

But as Covid numbers went down and a vaccine was made available, theaters began to reopen.

Exhumed Films found a new partner to present their Horror-thon — The Colonial Theater in Phoenixville, PA. After a lost year, the incredibly popular event was back for the 14th edition. This writer was fortunate enough to secure a ticket, and on the morning of November 6, 2021, I headed to Phoenixville for 24-plus hours of movie mayhem.

Would I survive, and what would be left of me by the end?!

The 2021 Horror-thon was my first, and I took some time to get acquainted with the rules and suggestions for guests. 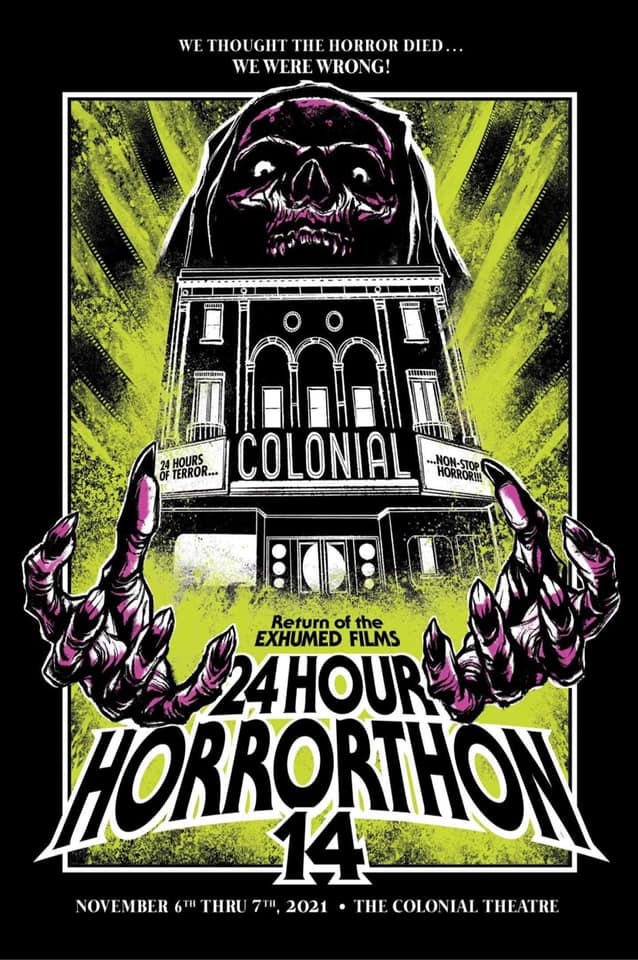 Guests were asked to refrain from bringing any food or drink from outside the theater. The theater’s concession stand would be open for the entirety of the event, and meal boxes would be brought in sometime on Saturday afternoon. We were also advised to bring pillows and blankets. It’s a long event and worth making sure you’re comfortable if you’re in it for the long haul.

We were given wristbands on entry, and we could freely leave and return to the theater. This would become important for managing the long hours of sitting in slightly uncomfortable theater seats. There were opportunities to leave during the event to grab a meal at a local restaurant or coffee shop, or just step out for some air and a quick walk.

The event started around 11:45 a.m. on Saturday, November 6, with some quick announcements.

The movies were not revealed beforehand, but the program did offer clues for the fifteen movies scheduled to be shown. Most of the films were shown on 35mm, but we were informed that two movies would be shown digitally. After requests to make sure we clean up after ourselves, not use cell phones or talk during the movies, and the reveal of some early raffle winners, it was time for the first movie — THE EXORCIST (the extended, or “version we’ve never seen” cut).

The audience cheered when the film started, and I was happy that I chose to go to an event that would start with my favorite horror movie.

Sidenote: Exhumed Films prides itself in not repeating movies from previous Horror-thons. They did admit that this year’s event would be showing two movies previously screened, but under different titles/versions, so they loosely count as not having been shown previously.

For the next (approximately) 26 hours, attendees were shown an array of shocking, beloved, classic, horrific, and funny movies. 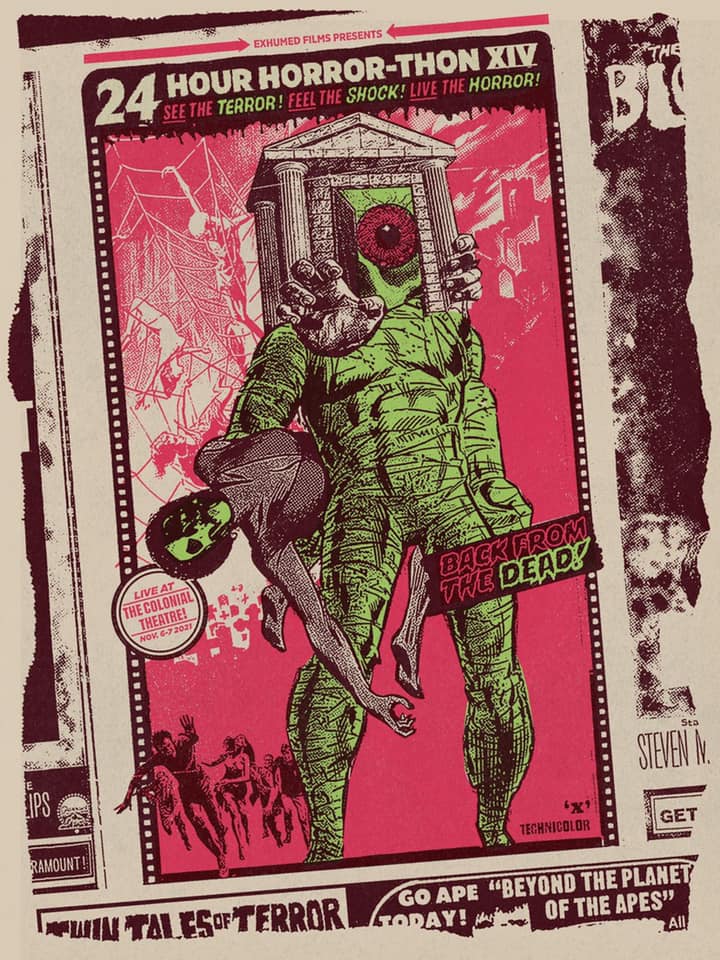 Between each movie screening was 8 to 10 minutes of trailers.

You may be wondering why a 24-hour event lasted nearly 26 hours, and there are two reasons. Daylight savings time occurred over the weekend, and clocks turned back one hour, which lead to film number nine starting at 1:55 a.m. and ending at 2:10 a.m.! Additionally, one of the movies was the original cut which is 20 minutes longer than the American theatrical cut.

Of the fifteen movies shown at Horror-thon, I had previously seen five.

Some of the movies I had long wanted to see, and a few I had never heard of before. A handful of movies I was experiencing for the first time and quickly became my favorites were:

Death Game, in particular, created a lot of conversation throughout the day. Taking breaks outside, or talking to some of the concession workers, there was hardly a moment where I didn’t overhear fans discussing this very strange slice of exploitation. Later I found out that Eli Roth had remade Death Game as the Keanu Reeves-starring movie, Knock Knock.

Attendance for the event remained strong throughout. 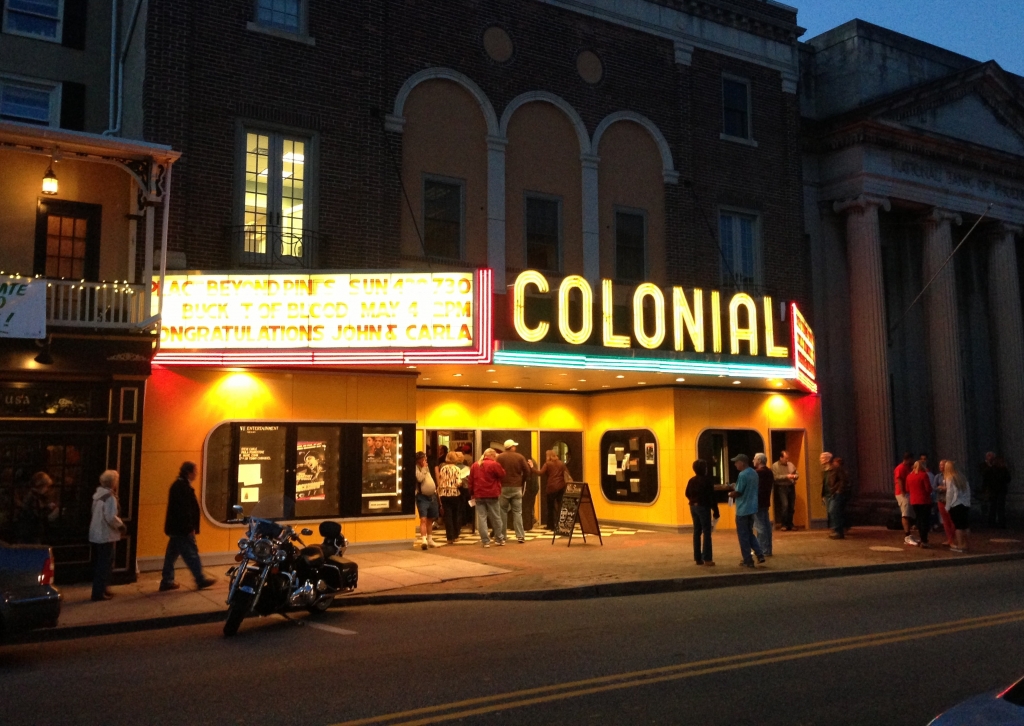 At other long-running events I had attended, I had become used to seeing the number of attendees decline as the event went on. But there didn’t appear to be too many fans leaving the Horror-thon.

There were times throughout the night where a few rows would be empty, but they would be re-occupied within an hour or two. Surprisingly, the energy of the crowd remained high, cheering the start of each movie, and sometimes the well-known stars and/or directors of the movies.

The best part was seeing this landmark theater (famous for The Blob (1958) filming scenes at The Colonial), full of movie fans and rarely seeing a cell phone used during the screenings, or conversations happening. It’s a rare delight when I’ve been used to seeing movies at an AMC or Regal where people routinely turn on their phones or have conversations over the movie.

The event came to a rousing conclusion with more raffle winner announcements and the final movie — Peter Jackson’s The Frighteners.

When the Universal logo filled the screen and the familiar Danny Elfman score began, fans erupted in joyous cheers and applause. Though I thought I had no more energy left to give, seeing this cult classic on the big screen for the first time, filled me with happiness and a burst of needed energy.

I watched fifteen movies and one episode of The Addams Family, but missed nearly all the trailers.

The 8-10 minutes between each movie gave me time to re-energize outside or, as many attendees did, take advantage of the time for a quick bathroom break. Admittedly, I had a few micro naps (about 10 minutes) during a few of the movies, but I was able to stay awake throughout most of the event.

By the time THE FRIGHTENERS ended around 1:00 p.m. on Sunday, my brain was jelly and my eyes glazed over. But I was so happy to have experienced Exhumed Films 24-Hour Horror-thon, meet some great people at the event, and make a promise to attend the 2022 Horror-thon.

Moviephiles, horror lovers, and fans looking to find a community of fellow movie fans: this is an event you don’t want to miss out on. 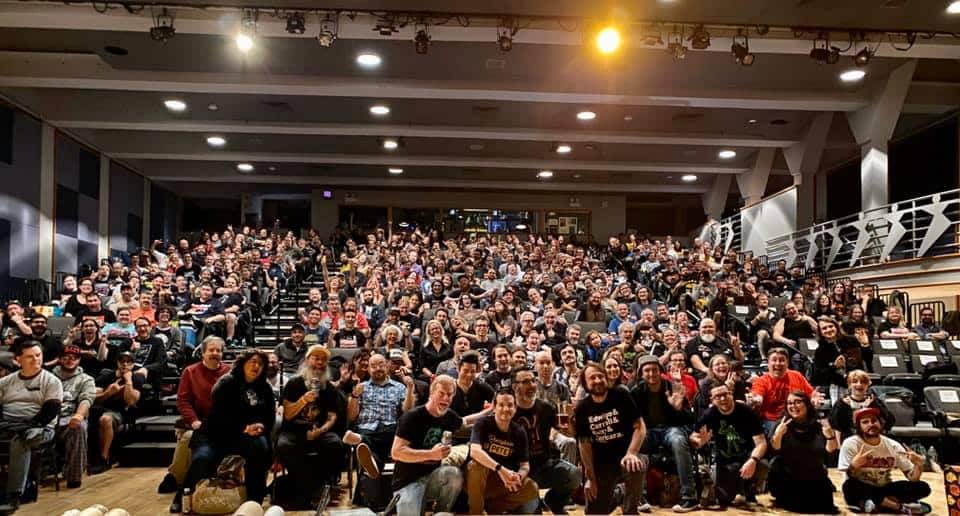 Get a ticket for next year, plan your trip, bring your blankets, pillows, and seat cushions, and spend the night with your tribe and Exhumed Films. It’s not an experience you are likely to forget.

And now, here’s an official list of all the films from the 2021 Exhumed Films 24-Hour Horror-thon: