Bella Thorne shines in”Girl”, a gritty and emotional tale of perseverance that is at once brutal and sentimental, disheartening and inspirational.

Day two of Fantastic Fest followed a strong opening night with the world premier of actor-turned-director Chad Faust’s first feature film, Girl. An emotionally hard-hitting tale of revenge and redemption, the film tells the story of a woman’s mission to hunt down and exact revenge on the abusive father who abandoned her when she was six years old. After her mom receives a threatening letter from the deadbeat dad who kicked them to the curb years ago, a troubled young woman (Bella Thorne) travels to the decaying hometown she left as a child with nothing but a hatchet and stubborn determination for violence.

When she arrives and prepares for a bloody confrontation, she quickly discovers that’s someone else has literally already beaten her to the punch, and what’s left of her dad’s lifeless body is hanging in a toolshed with clear signs of foul play. As she weaves her way through the crumbling community to find answers and untangle a complicated past, she crosses paths with the town’s corrupt sheriff (Mickey Rourke) and his partner in crime (played by director Chad Faust), who have some vengeful plans of their own.

Soon she finds herself caught up in a web of violence and deceit that forces her to question everything she has ever known about her family and her own identity.

Girl is at its core a story about being underestimated. 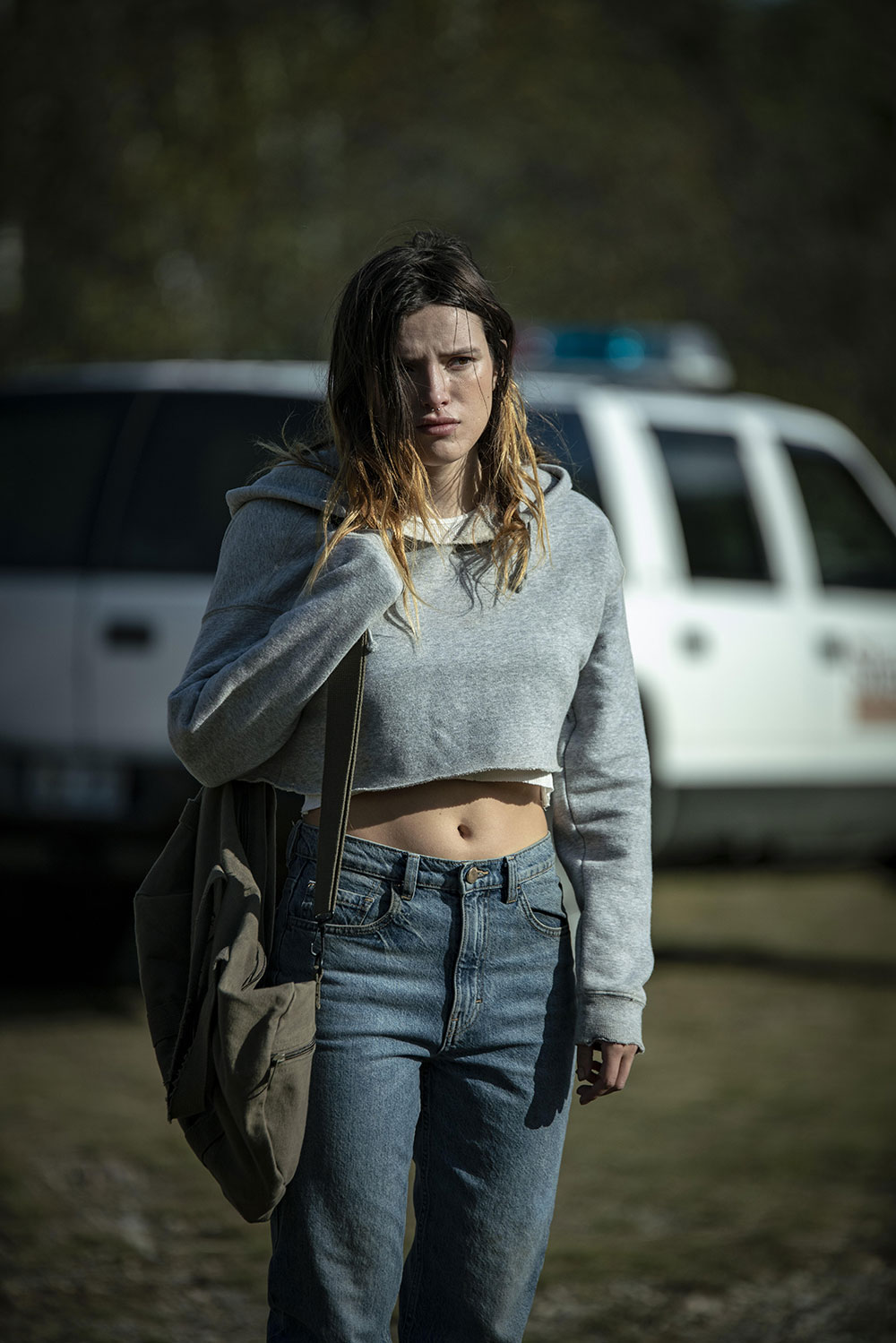 Director Chad Faust explains his decision to leave his characters mostly unnamed as a way to lead the audience into creating mental archetypes, only to later tear them down and reveal how much a person can surprise you when you give them a chance.

In that light, I can think of no better performer to fill the lead role than Bella Thorne. Thorne, whose other appearances have included Allison in Netflix’s The Babysitter and a rather infamous stint on OnlyFans, has been a polarizing figure for most of her career, and generally does not garner much praise from audiences or critics.

In GIRL it is hard to find anything to criticize, and it’s possible that Thorne has stumbled upon a career re-defining role. Her depiction of the titular character is soulful and captivating, with a smoldering intensity that is palpable in every scene.

Meanwhile Rourke’s usual silent charisma is nothing new, but provides a weighty counterbalance to Thorne’s that creates a worthy adversary. Faust’s role as “the charmer” injects the film with a small dose of dark humor, intermittently breaking up the intensity when it is most needed, and a solid list of supporting cast members (including Lanette Ware as the local barfly and Elizabeth Saunders as Mama) add a tableau of flawed but honest humanity.

The setting is a town that time forgot, where signs of broken dreams and forgotten potential are peppered across the landscape, and the best thing it has to offer its downtrodden residents is a bus ride out.

Though not immediately apparent, stylistically and thematically Girl is a western in almost every way.

It takes well-worn tropes of revenge and lawlessness, but succeeds in bringing the genre out of its musty old shell of testosterone-fueled gunslingers playing cowboy.

It is essentially the spiritual descendent of movies like True Grit, and Thorne’s unnamed hatchet-wielding lone wolf character has practically taken the torch directly from Clint Eastwood’s ironically stoic Man with No Name. Her story is one of tenacity, courage, loyalty, and the refusal to let love get swallowed up by a heartless world.

The film is sure to awaken a variety of passions in its viewers — rage, disappointment, hope, dismay, and maybe even a bittersweet tear or two. Its final act may feel to some like an abrupt betrayal of the Girl Power narrative, but lest we forget that feminism does not mean painting all women as saints and victims.

I’m already eager to see Thorne’s career continue to blossom, and I hope the film continues to win acclaim as it gets in front of wider audiences.

Screen Media recently announced the acquisition of all US rights to GIRL. Following its premiere at Fantastic Fest, GIRL will receive a day-and-date release sometime in November.