Inspired by enduring horror classics, “Death of Me” is a beautifully executed and chilling tale about the lengths some will go in service of their beliefs. 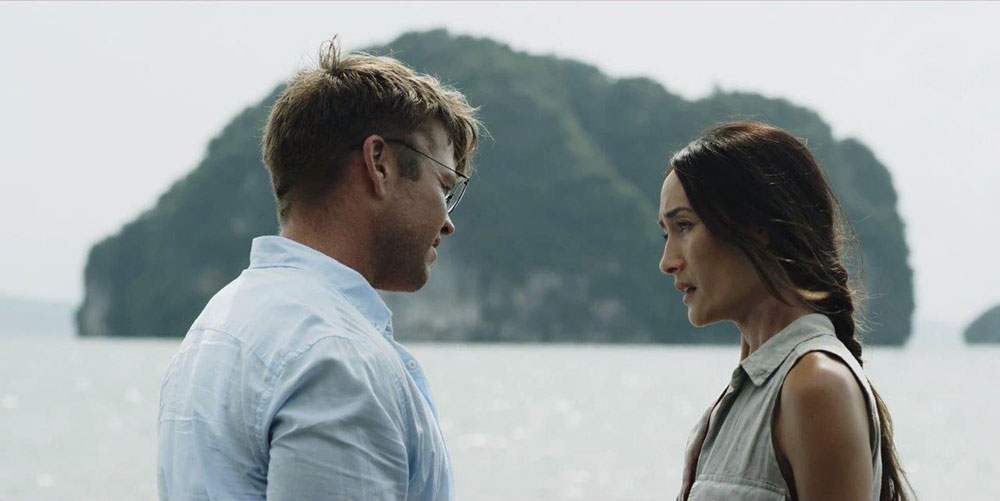 Synopsis
Vacationing on an island off the coast of Thailand, Neil and Christine awake hungover, with no memory of the previous night. After watching horrific footage on Neil’s camera, discover a typhoon is threatening the island, and find out it is hours until the next ferry, the couple attempt to reconstruct the night’s events, and are snared in a web of mystery, black magic, and murder.

When you go on vacation to a country you’ve never been to, especially when it is a very exotic one and they speak a language you don’t know, there is a certain amount of care you need to take. I’ve gotten Montezuma’s revenge and roofied on separate occasions in Mexico, so I know of what I speak. In both cases, it was horrible. Do not, I repeat, do not drink whatever someone hands you! Many places, no matter how beautiful and relaxing the vacation spot seems, may be teeming with locals who want to take advantage of tourists.

And as in the case of Death of Me, some might even have much more nefarious plans for unsuspecting and naïve visitors.

Neil (Luke Hemsworth) and Christine (Maggie Q), an exceptionally good-looking married couple, are on vacation to a beautiful island off the coast of Thailand. Neil is a travel reporter, and Christine is just along for the ride. The film begins with them waking up covered with dirt and blood, with no memory of what happened the night before. They overslept, so the couple quickly gets their suitcases packed to leave the island. When they arrive at the ferry that would them back to the mainland, they find they have no identification and cannot leave. A typhoon is on its way, and they are stuck until they find their passports.

Attempting to figure out what happened the night before, they check Neil’s phone for photos of the evening and find a horrifying video, 2 1/2 hours long, of what looks like Neil murdering Christine and then burying her. But Christine is alive, and they both have quite the WTF moment!

Also significant is a necklace that Christine is wearing. She is bruised and not dead. But whenever she takes off the necklace, she gets sick and throws up all kinds of disgusting things.

To go very far into the story would be giving too much away. 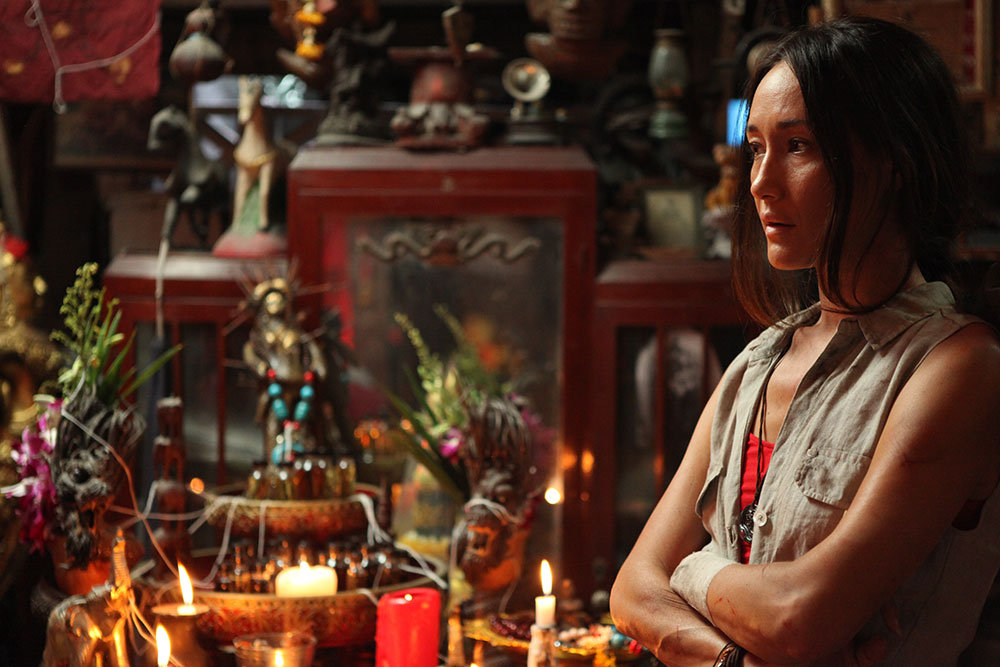 Suffice it to say, they run all over the little town, and the more they find out, the more confused they get.

Everyone is celebrating some sort of creepy festival, and even though there is a typhoon on the way, the islanders don’t seem too worried. Their town has never been hit by a storm in over 200 years they say. The general consensus is that the couple partied too much and are hallucinating.

Back at the Airbnb, the owner Samantha (Alex Essoe) gives Christine and Neil a drink and explains that the island is magical and healed her of cancer. She tries to encourage them to stay, saying, “If you find paradise, why would you want to leave?” Right after this, in one of the gorier scenes, Christine sees Neil do something unbelievable, and she faints. Waking up on a bench, she tries to tell the islanders what happened, but no one believes her.

Now Neil is missing, and Christine is on her own.

Death of Me reminded me a little of the classic film Rosemary’s Baby, which director Darren Lynn Bousman says he wanted to pay homage to with this film. 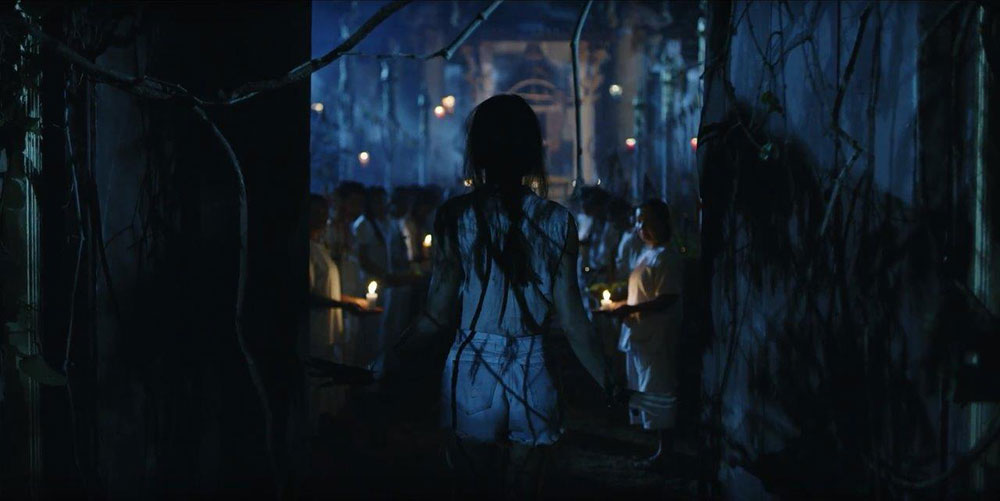 The feeling that Christine is being used and gaslighted was so similar.

The film delves into the mythology of an actual ancient oil used in dark magic called Nam Mun Prai. The use of it on a person allows someone else to take control of whoever drinks it, and there is definitely some manipulating going on. Even the local doctor says it’s all just a hallucination. But is it really? Are the island folks evil with a dark agenda, or did the couple just take some bad drugs?

When I had the chance to speak with Darren about the film (stay tuned for the full interview), he shared the following:

“We’ve obviously taken creative liberty and say it, (Nam Mun Prai) makes you so susceptible that you are able to do really horrible things. Another thing I dig about this movie is that we give the audience two pathways to go down. If they want to believe in the supernatural, it’s got a supernatural tone, or if they want to believe that everything is practical, they are just being manipulated by this island, you can believe that too, and we set this whole idea up from the eating, drinking, and drugs that are being given to them throughout the film.”

There is so much to love about this crazy film! 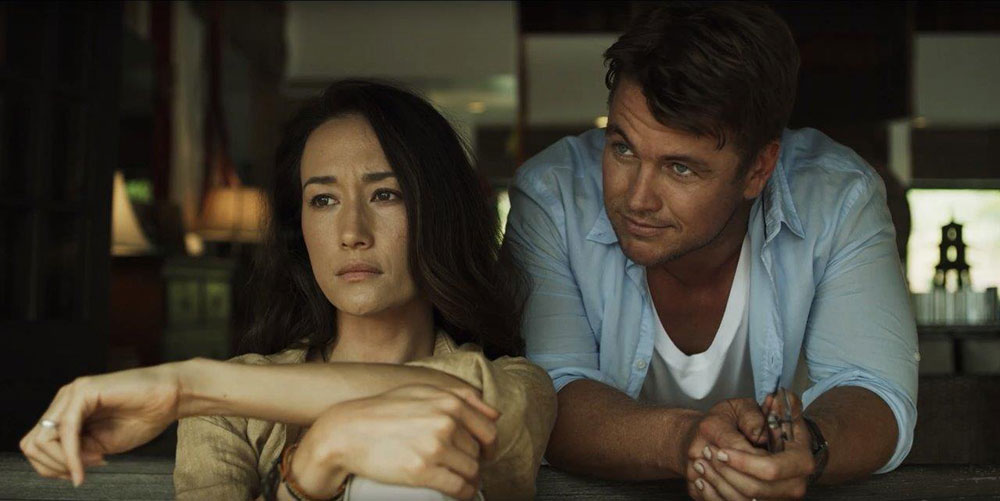 Everything seemed to defy logic. It was easy to see something nefarious was going on, but impossible to know exactly what.

The cinematography by Jose David Montero is fantastic, really highlighting the difference between Neil and Christine’s world compared to this exotic culture. And, while I’m not always a fan of how films use music in a heavy handed way to signal impending danger, the dreamlike and haunting score for Death of Me by Mark Sayfritz was perfect. In addition, the script by Ari Margolis, James Morley III, and David Tish was witty, believable, inventive, and very unsettling.

The cast was impeccable too!

Luke Hemsworth and Maggie Q played a convincing married couple, not perfect at getting along but caring when they needed to be. Alex Essoe (Starry Eyes) has been in a ton of films this year, and she was terrific as well. Overall, everyone was amazing in their roles, and I’m sure many of the village people were cast locally in Thailand.

DEATH OF ME has unexpected scares, quite a bit of gore, black magic, and gorgeous scenery. It’s also sexy as hell. It was fast-paced and kept me guessing until the very end! Provocative and intense, it takes the idea of “Till death do us part” to a whole new level — and might even make you think twice about traveling overseas.

Death of Me will be released in theaters, On Demand and Digital October 2nd, 2020 from Saban Films.