At the World Premiere of Smile, writer/director Parker Finn introduced the film by thanking Paramount Pictures for taking a chance on his very strange, left-of-center movie. He then wished the audience luck as we prepared to embark on the surreal nightmare journey.

Smile centers around a psychiatrist named Dr. Rose Carter, played by Sosie Bacon, the woman with just one degree of separation from her dad Kevin Bacon (mom is Kyra Sedgwick).

Bacon may be most familiar to audiences from her television appearances, including Mare of Easttown, Narcos: Mexico, 13 Reasons Why, and Scream: The TV Series. However, Smile may very well be the project that truly catapults her career and makes her a household name.

Bacon doesn’t just star in Smile, she is the epicenter of the film.

There isn’t a scene she isn’t in, or that isn’t seen from her perspective. It’s essentially a one-woman show, and Bacon carries that weight effortlessly.

We first meet Rose while working in her sterile, sparsely decorated psychiatric hospital. Her clinic specializes in treating emergency psychiatric cases, so she’s seen more than her fair share of patients teetering at the edge of madness.

But there’s something different about her next patient, Laura Weaver (Caitlin Stasey). Laura appears distraught and unwell, but she’s also lucid and intelligent — a bright Ph.D. student. She’s been plagued with terrifying visions, claiming an entity is stalking and terrorizing her. This entity can take the appearance of anyone it wants, including her friends and loved ones.

It shows up and smiles at her, but the smile is not kind or comforting. It’s sinister and deeply disturbing. Laura is convinced the entity means her harm, and she’s arrived at the facility fearing for her life.

As weird as it all sounds, Rose is unphased. She’s seen and heard it all before. She attempts to psychoanalyze Laura, but this just agitates her. She’s not there for therapy; she just needs someone to listen to, believe, and help her. Of course, her story doesn’t sound like a sane person’s tale, and Rose naturally assumes Laura is experiencing mental illness.

Suddenly, Laura experiences another terrifying vision, and she begins to panic. Worried she might be a danger to herself, Rose calls for assistance. But it arrives too late. The woman has found a broken piece of a vase and managed to slit her throat open right in front of Rose — all while flashing a sadistic smile that stretches from ear to ear.

Rose is understandably shaken by the traumatic experience. She begins to be haunted by visions of the dead woman, starts to see and hear things, and experiences a constant sense of paranoia and unease.

Assuming she’s experiencing post-traumatic stress from her patient’s death, which has likely triggered painful memories of her own mother’s suicide when Rose was just a little girl, her boss orders her to take a leave of absence. 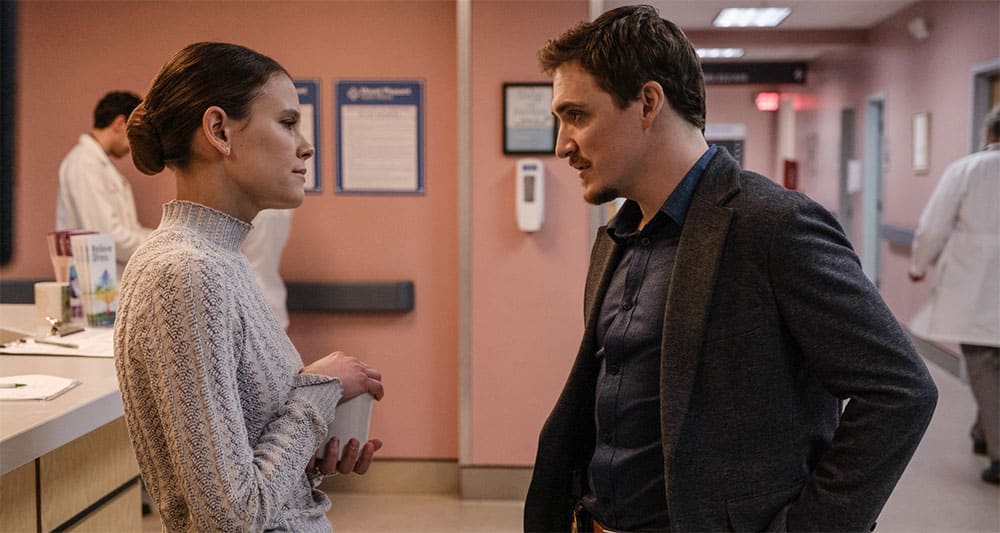 (Sidenote: If you’re familiar with the incredible The Boys, you know just how good Usher is at playing a smarmy d*ckhead — and I mean that as a compliment to this fine actor.)

He’s someone who likes order and predictability, and the increasingly unraveling Rose does not fit that bill.

When she confesses to him she’s been seeing things while looking for support, he calls her ex-therapist, Dr. Madeline Northcott (Robin Weigert, Deadwood), to make a surprise house call.

He’s a cop called to the scene of the suicide at Rose’s hospital, and he shows up the next day to see how she’s doing. She blows him off, thinking he’s attempting to rekindle their romance. But once she starts losing her grip on sanity, she turns to him for help trying to figure out what’s happening to her.

As it turns out, Laura’s death was not an anomaly. Rose discovers a pattern of people who have killed themselves in similar horrific fashions, all shortly after witnessing someone else’s suicide.

As Rose realizes she’s being stalked by the same entity that killed her patient and that she is likely its next target, she enlists Joel’s help to figure out the pattern of the deaths and identify the source of the demonic force behind them.

It’s a familiar premise: a mysterious supernatural force stalks its victims, and a curse is passed from person to person until someone tries to figure out what it is and how to stop it. In that way, it will remind you of films like It Follows, The Ring, and Wish Upon.

But familiarity doesn’t make it dull or unoriginal, and Finn keeps us engaged by giving us an interesting protagonist to follow, plus a hefty dose of creepy imagery, atmospheric tension, and blood pressure-raising jump scares.

There’s some compelling subtext about the effects of trauma and guilt, the fragility of life that Parker describes as “a house of cards” that can be toppled in the blink of an eye, and the lack of empathy in the medical profession.

Most compelling is the way smiles are used in the film to extraordinary, spine-tingling effect to subvert our expectations.

It’s a great way to flip the tables on that social cue we all use to convey everything is ok…even when everything is very far from ok.

A smile is often worn as a mask to hide our pain and betray what we’re really feeling inside. So, there is something so unsettling about seeing someone smile this uncomfortable, inauthentic smile while they are being taken over by immense darkness.

In fact, our main character Rose has never really been ok. She’s been wearing a mask her whole life, from the moment of her original trauma as a little girl.

So, the film effectively reflects on how we cope with pain and hide our authentic selves from others.

However, despite all that delicious depth hiding just beneath the surface, you don’t have to watch the film with an analytical eye to appreciate it.

If you’re the kind of viewer who just wants to have the holy spirit exorcised out of them in sheer terror, Smile has you covered.

Finn explained he wanted the