Carlota Pereda’s unflinching and uncompromising “Piggy” is a brutal masterpiece of psychological horror and the effects of bullying. Carlota Pereda’s Piggy was recently awarded BEST HORROR FILM at this year’s Fantastic Fest, and I’m here to tell you there’s a damn good reason why.

After generating considerable buzz on the festival circuit since its premiere at Sundance in January 2022, there’s a good chance Piggy may already be on your radar. If not, let me add to the rousing chorus of those celebrating this harrowing psychological horror film/slasher about bullying, body shaming, trauma, and revenge.

If you follow this site, you know we’re always proselytizing about shorts, encouraging you to discover some of the genre’s best, rising talent at the forefront of their success.

Like so many extraordinary feature films, Piggy began life as a short film. Pereda’s award-winning 2018 short film of the same name set up a disturbing and thought-provoking premise. It asked audiences to consider the monstrosity of human nature, the consequences of cruelty, and the boundaries of justice and morality.

You can watch the outstanding 13-minute short here on Alter.

Both the short and the feature film revolve around Sara, played by the remarkable Laura Galán, a lonely, overweight teen living in a rural Spanish town. While the short centers on an excruciating event at the pool, the feature expounds on the terror, giving us insight into the full breadth of Sara’s anguish — both before and after the triggering event.

Sara’s parents own a butcher shop, and she’s forced to help at the shop during the sweltering summer months while wistfully watching out the window as the beautiful, cool kids enjoy the spoils of youth — living a life she can only dream about.

Sadly, it’s not just the pressure of helping her family that keeps Sara from experiencing joy and companionship.

Because of her weight, she is mercilessly bullied by the local teens. The brunt of the attacks stems from a trio of girls who relentlessly tease and torment her.

The three girls — including spiteful ringleader Maca (Claudia Salas), Roci (Camille Aguilar), and Claudia (Irene Ferreiro) — have saddled Sara with a wretchedly cruel nickname, the titular Piggy. They verbally assault her in person and online.

To make matters worse, it’s implied one of the girls, Claudia, once had a friendship with Sara but has since forsaken those bonds in pursuit of popularity. Claudia doesn’t delight in Sara’s abuse like her friends do, but she remains complicit — too scared to rock the boat and disrupt her social status.

Things aren’t much better at home. Sara is isolated and ostracized even among her family, and constant barbs from her well-meaning but brusque mom (the excellent Carmen Machi) only amplify her insecurities.

Sara has only one reprieve from the onslaught of daily abuses. 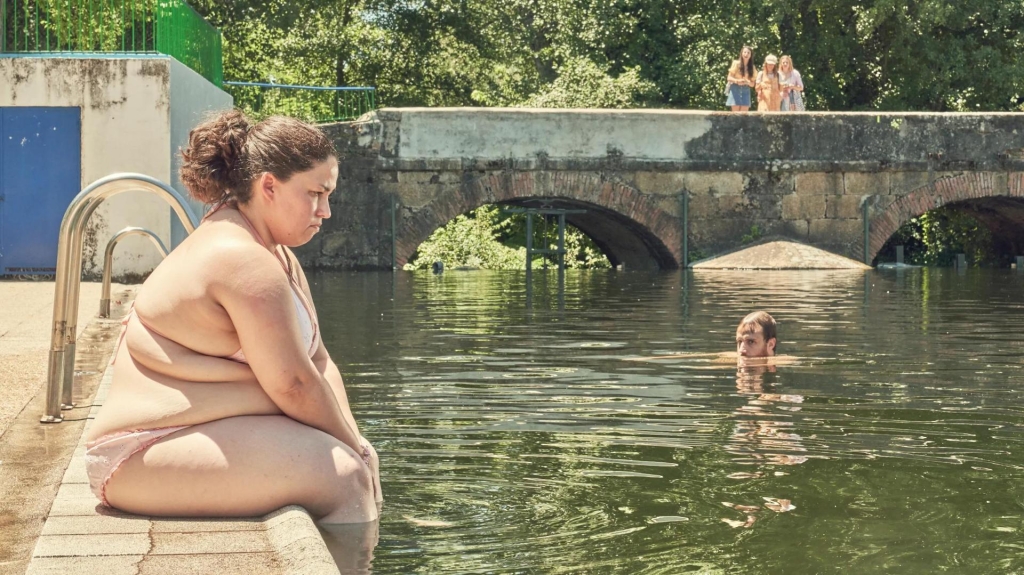 She sneaks away to the local pool and goes for a swim, seeking sanctuary from her troubles.

But one fateful day, her troubles follow her. Her bullies show up to continue their persecution. In a vicious act of savagery, they force the frightened Sara underwater to hold her breath and hide from the attack.

Once they are done antagonizing her, they force one last horrible indignity upon her, stealing her towel and clothes and forcing her to make the long walk home in the suffocating sun, barefoot and half naked.

It’s a walk of physical and emotional suffering, plagued by absolute despair and humiliation.

When Sara is at her most vulnerable, she stumbles upon a van on the side of the road and realizes her tormentors have been abducted by a stranger from the pool (Richard Holmes) who witnessed the abuse. The stranger lingers long enough to make eye contact with Sarah, tossing Claudia’s towel out of the van so she can cover up. He offers a reassuring glance that lets Sara know she’s safe from harm.

However, as he drives away and we see a bloodied Claudia through the back window desperately pleading for help, it’s clear that safety does not extend to her bullies. Sara, paralyzed and anesthetized following the series of grueling events, does nothing to intervene.

And this is where the feature picks up from the short, twisting and turning in unexpected ways and morphing expertly from dark psychological horror to crime thriller to brutal and blood-soaked slasher. Sara returns home and makes every effort to cover up what she’s seen, refusing to provide helpful information to her parents, the police, or the family members of the missing girls.

Soon after the girls’ kidnapping, the pool lifeguard’s body is found weighed down at the bottom of the pool, and another woman is found murdered in her home. Suddenly, the town is wrecked with fear and panic. This compounds Sara’s agony as she finds herself desperate to help but afraid of the consequences. She’s also strangely sympathetic to the man behind the terror, who seems to be something of an avenging guardian angel.

It’s a scathing commentary on human ethics when, in a town full of “good” and “righteous” people, the serial killer is the only one who offers any dignity to poor Sara, the only one she doesn’t fear.

Wracked with guilt but unable to trust those around her, she takes it upon herself to piece together the clues and try to find out what happened to the kidnapped girls. The palpable tension reaches a fevered boiling point, forcing Sara into a soaring showdown between her conscience and her primal urges.

The decision to shoot Piggy in a tight 1.33:1 aspect ratio is a powerfully effective one. Sara is boxed in and trapped within the confines of her small and suffocating world. She’s a prisoner of her own body and a social construct that makes her weak and vulnerable.

The camera doesn’t flinch from its bruising perspective.

There’s an endless amount to praise about Piggy, but so much of its power hinges on the breathtakingly brilliant, fearless, utterly committed physical performance from Galán.