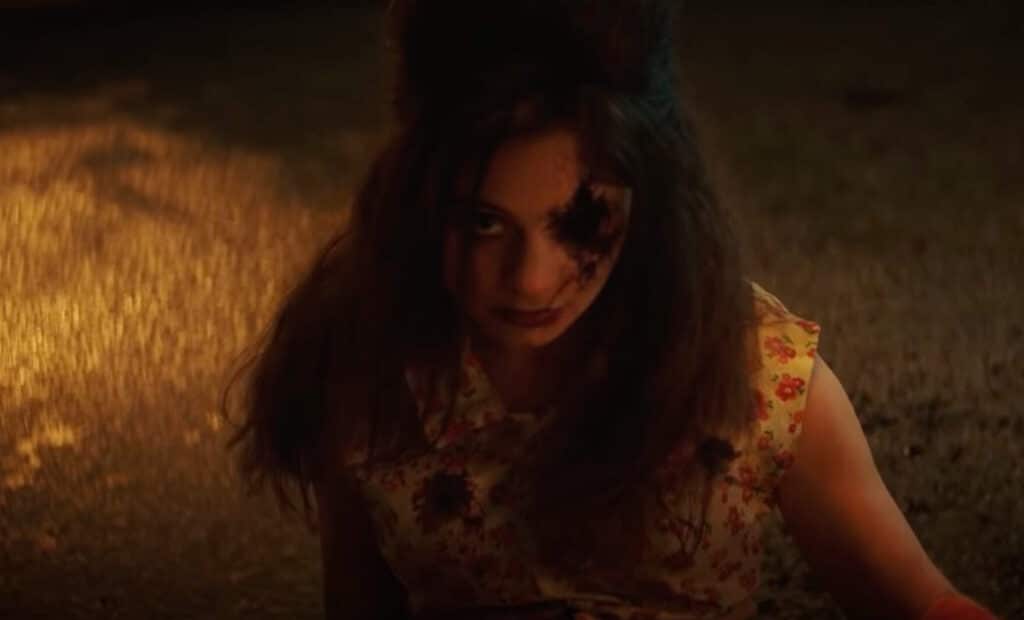 SPOILER ALERT
This review contains potential plot spoilers for “Fear Street: 1666”, as well as the previous films in the trilogy.

Fear Street Part Three: 1666 picks up where the last film left off, with Deena rejoining Sarah Fier’s severed hand back to her buried remains, and essentially becoming Sarah Fier — transferring consciousness with Sarah back in 1666.

As Sarah Fier, strange things begin to occur around Deena in the settlement of Union. Sarah and her not-so-secret lover, Hannah Miller/Sam, are soon blamed for these unnatural occurrences and are labeled witches.  Sarah/Deena must quickly expose the truth before she and Hannah face the gallows.

Of course, we know what happens to Sarah in the end, and when Deena’s consciousness returns to her own body back in 1994, she finally knows the truth about Sarah Fier and how to permanently end the curse that has plagued her town for three centuries.

Fear Street Part Three is the best and scariest entry of the trilogy.

The finale really delivered in terms of creepy and disturbing imagery, making it stand out from its predecessors.

Viewers find out the all-important origin of Sarah Fier and the town curse through Deena’s own eyes. And this crucial backstory is revealed in a way that is interesting and compelling.

Additionally, Kiana Madeira, who plays Deena, is definitely someone to look out for. I predict she’s got what it takes to become a huge star. Her talent is hard to deny, and she truly carries this trilogy.

In 1666, Sarah Fier and Hannah Miller bravely pursue a romantic relationship and are consequently accused of bringing the Devil into town when, in actuality, it was a white man’s doing. This deceit endures for generations.

In this way, the film serves as an excellent commentary on generational power, old money, and the wicked lies that the rich and powerful concoct to stay in power.

Netflix’s Fear Street trilogy is such a solid and special horror trilogy for many reasons. But I think that the most important reason is the wonderful way it handles representation. The enchanting relationship between Deena and Sam that remains the core of this trilogy is so profound, and I find it especially heartening that a mainstream teen horror film prominently features such a positive and prominent portrayal of a same-sex relationship.

Everything comes together quite nicely in this final chapter, and I will definitely be revisiting this trilogy soon. If you haven’t already, now is a great time to experience the complete anthology on Netflix.

I absolutely loved these films and encourage you to take a walk on Fear Street, where your worst nightmares live.