There may be nothing uglier than envy but this short horror block from Final Girls Berlin Film Fest proves it makes for sinfully good horror.

Envy. It’s a feeling we may all have felt at one time or another, and it’s also the theme for day two’s block of shorts at The Final Girls Film Festival. After day one’s Wrath program, the fest continues its look at the Seven Deadly Sins. These short films all embrace the idea of envy, interwoven with all the horrors that come with giving into those temptations.

Whether the feelings involve romantic interests, lustful endeavors, material possessions, or just plain ol’ attention-seeking, these films all let us watch each of these characters give in to those universal urges. From fighting over a necklace to fighting over a man — even to fighting over the spotlight — it’s interesting to witness how envy often brings out our inner warrior.

Check out our coverage of this impressive block below, and then head to Vimeo where you can check out all these shorts* for yourself for a small rental fee. 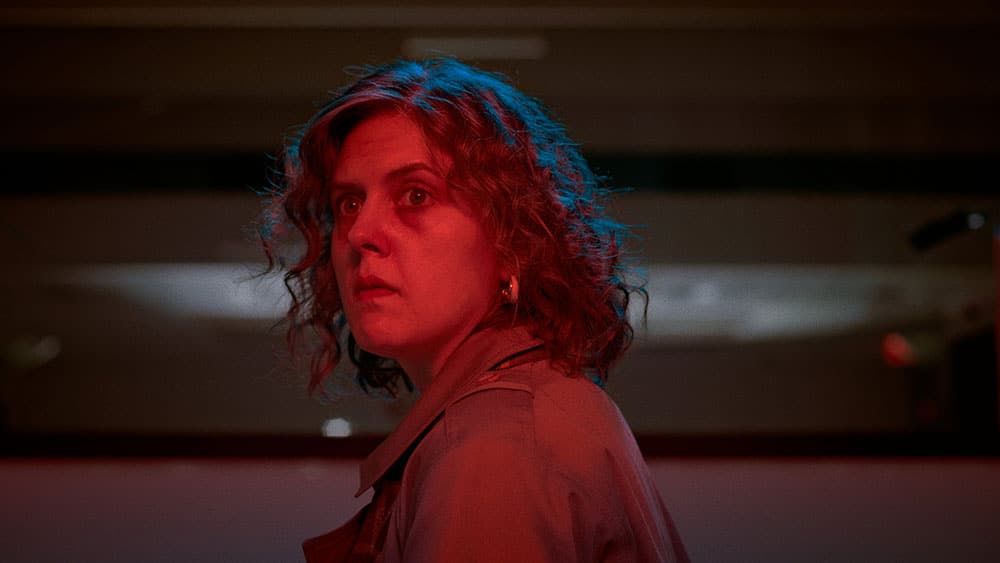 Just before the mall closes, two women fight over a special necklace.

It’s a fairly simple premise, but with so much more going on, Red is the Color of Beauty has an ethereal feel. Maybe that’s just me being a 90s kid who loved malls. But with this short being filmed in a shopping mall with all the red and blue hues, and an overly groomed department store clerk, it’s hard not to feel like Red is the Color of Beauty takes in a different time.

Anyway, the film begins as the mall is about to close and Cheryl (Grace Rex) has just found a necklace she absolutely needs. It’s a pretty ruby stone and she loves it; even the clerk seems happy with her choice. Unfortunately, that’s when Blair (Sidney White) shows up with her greasy hair and demands the necklace is hers. Once Blair claims “you don’t know what it does” the curiosity intensifies.

The events that follow dive deep into the theme with the women battling over the necklace and its magic. Once informed of what the necklace can do, it’s obvious why anyone would want it.

Director/writer Beck Kitsis and crew did a really great job of playing with visual elements and location, and the mood of the film is so stylish and memorable it’s hard not to want more. 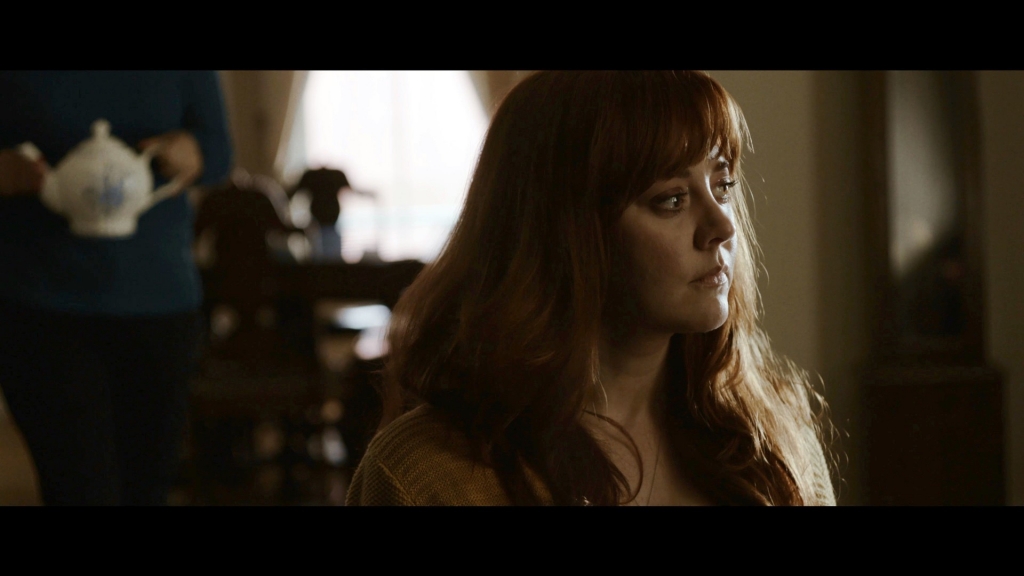 A heated conversation between two women reveals some sinister twists and turns.

The women aren’t friendly with each other and eventually reveal that they are in love with the same man. Adrienne believes she’s been caught in an affair with Quinn’s partner and is furious. The details aren’t clear, leaving everyone (including Adrienne) to assume and piece together Quinn’s motives.

The smashing of a ladybug (who does that??) ensures that we probably can’t trust Quinn.

Anatasha Blakely doesn’t only write and direct this brutal film but also delivers one of the most unsettling performances in her role as Quinn. The reveals that follow are shocking and the unexpected events are truly surprising, but that’s not to say this is at all a feel-good film.

Inch This, Knee Deep maintains its atmosphere of horror and anticipation, leaving us wanting to see more of Blakely’s work. 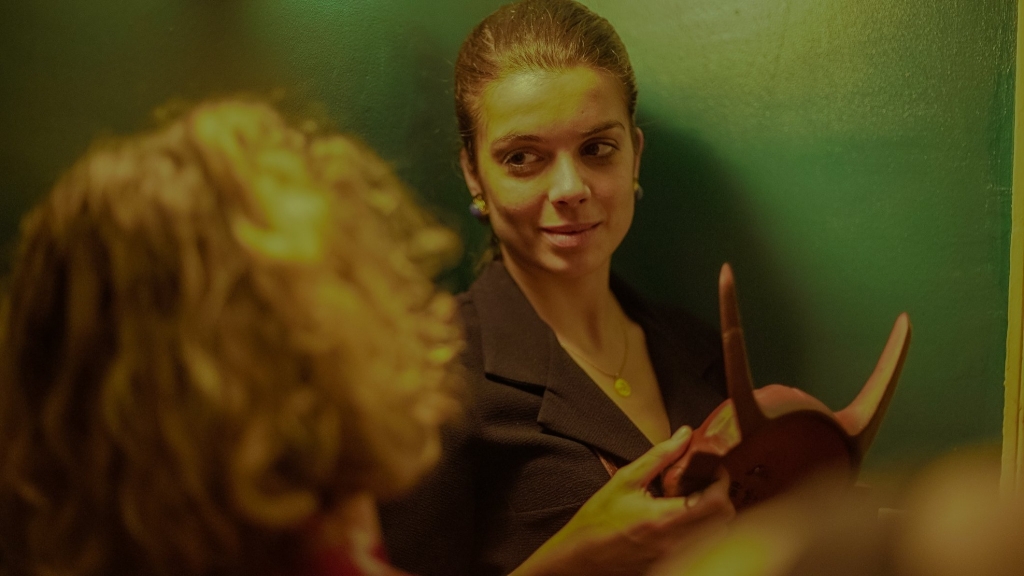 A woman meets her new boyfriend’s roommates and friends, only to learn his connection to one of them is more intimate than she’d expect.

Hannya drives right into the theme, being related directly to the mask it’s named after — “a jealous female demon”. When Ana (Anaïs Parello) goes to a party with her new boyfriend, she meets his childhood friend Marie (Sophie de Fürst) and is quickly unsettled by their connection.

Ana calls her mom to express her feelings, who only disturbs the mood with hints about Ana’s past. Apparently, she shouldn’t be at this party and should probably just go home. But, what grown adult wants to go home from a party because their parent told them to? Not Ana.

Instead, Ana parties pretty hard, taking drugs and being introduced to several masks that Marie has brought from her travels, including a Hannya mask. The party gets really intense and we learn that Ana’s mom really knows best. The possibility of her making it out of the party before any demons show their envious faces becomes more and more questionable.

Directed and written by Eva Muñoz, Hannya is a creepy and dark ride through the psyche of someone who is rightfully feeling jealous, but doesn’t have the proper tools to stop when they should. Two friends face an intruder during their wine and pizza night in this satirical horror.

Described as an exploration of the Bechdel test, director Alison Roberto and writer Landon LaRue made Girls Night In to play with a conversation between two women that leads to them fighting each other instead of the man that’s actually their problem.

Becca (Jess Adams) and Delaney (Skylar Benton) are two young women hanging out for the evening, while someone lurks in the background, preying on them. Eventually, he begins the chase and the women end up locked in the bathroom.

Their attempt to call for help turns into a comedic/ridiculous fight over how attractive this masked killer is and which of them is more deserving of his attention.

The satire (which was already very present) amps up to a new level and things escalate in a way only envy can cause. 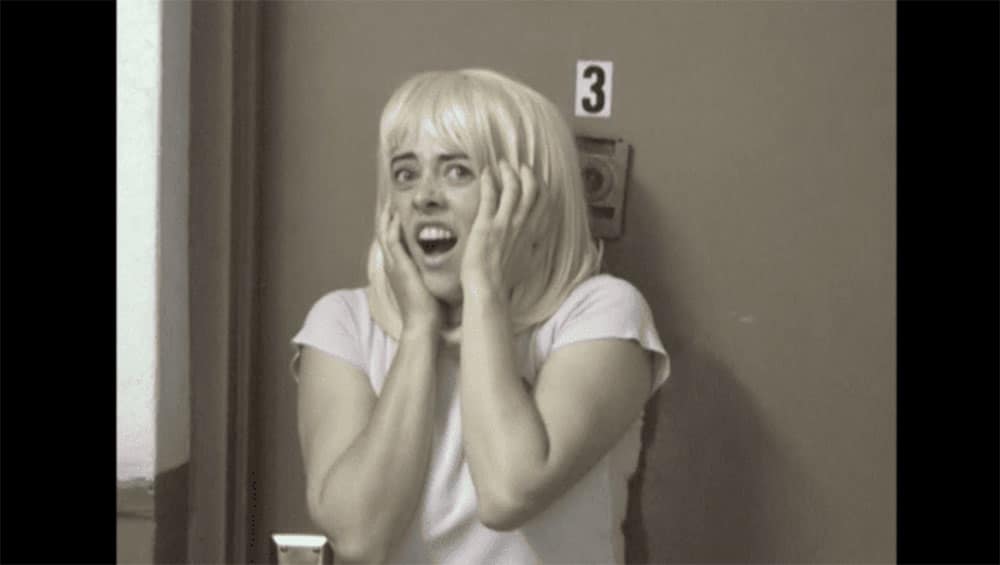 Identical twins with a secret, struggle to accept their separate identities.

Created by Mary Neely and Mika Bar-On Nesher, Murderers Prefer Blondes was made on an extremely low-budget (about $40 according to Neely’s instagram), but that doesn’t at all take away from its entertainment value.

Neely plays identical twins, one is blonde and the other is a brunette who struggles with the attention her sister gets. Apparently, bleaching her hair to match her sister’s blonde look is off-limits, she has other plans to feel better about her situation.

A dummy plays the boyfriend and things only get weirder from there. Murderers Prefer Blondes fully embraces its absurdity, from the writing to the props, to the extra close-up shots of Neely’s face, making it, maybe not the scariest but definitely the funniest of the block.

*Note we were unable to review the final short in the envy block, Sister (16 minutes) by director Mikaela Bruce from Spain. Watch the trailer for this short, revolving around two sisters whose unity is threatened by jealousy, right here.