“Sweetheart” is a unique monster tale bringing terror and the sting of psychological dread with its powerful reflection on real-life horror.

Washing up on a deserted island after a harrowing accident is dramatic and a tried-and-true formula that often makes for good cinema. Tom Hanks can tell you that much. Add in elements such as gaslighting and an aquatic monster, and you have the recipe for one hell of an emotional film.

Director JD Dillard paired those components together to make one taut and masterful film that explores the human will to survive in an interesting and innovative way.

Sweetheart is anchored by a resourceful and relatable heroine who the viewers actively identify with and root for, making it an experience that is as fully involving as it is terrifying. Sadly, this spectacular movie has flown a bit under the radar despite being funded by genre monolith Blumhouse and readily available to viewers on Netflix.

The film begins when our heroine Jenn (Kiersey Clemmons) washes ashore on a deserted island. The outlook seems grim, but the situation becomes even grimmer when she discovers that there is a monster living in a hole on the ocean floor not far from the island.

Jenn finds herself put against the normal stresses of her situation along with fighting for her survival against a vicious aquatic monster that has killed all previous castaways on the island.

The quietness of the film allows us to get to know Jenn from a different angle.

We don’t get a chance to dissect her words and interactions with others until later in the film. We’re following her fight for survival and seeing how resilient and resourceful she is.

Her frustration is palpable as well as her fear, but she manages to keep a level head and gives herself over to innovation. A lot of people would crack under such pressures, which is entirely understandable, but there are people who thrive under stress, and Jenn is one of those people.

Even in this silent observation of her actions, the audience feels a strong kinship with her.

Panic is as much her enemy as the creature that stalks her nightly is. Fighting panic is its own sort of monolithic task. Even though she doesn’t fully give in to panic, she does become reasonably vexed. To say Jenn has been dealt a poor hand by fate is a woefully cliched understatement. Fate has literally abandoned Jenn and left her to die on an island at the mercy of a monster.

Through her struggles on the island, the audience actively roots for Jenn, and it’s difficult not to. 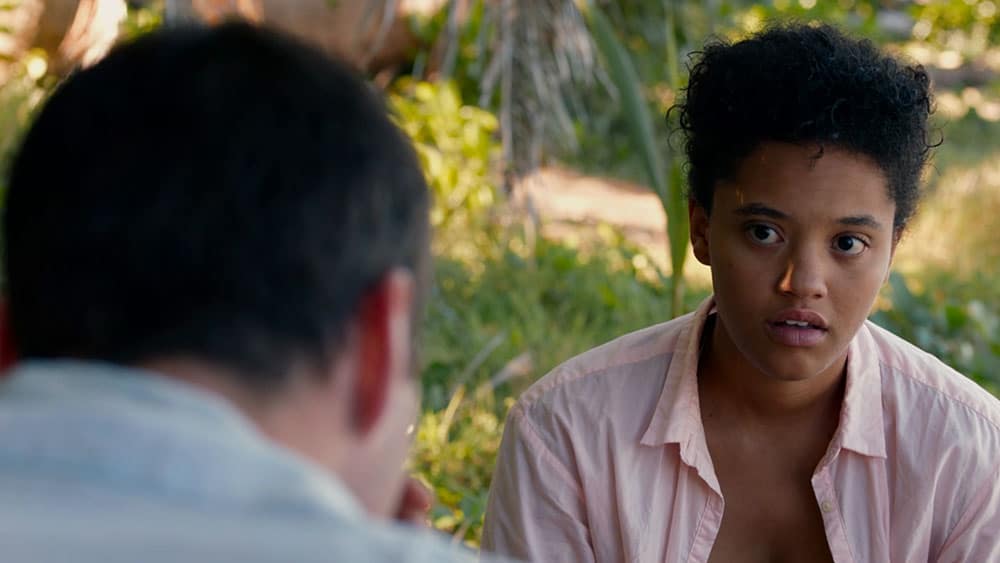 We’re allowed to see her in a vulnerable state and watch her attempt to make the best of it. We want her to live, and we want to see her make it off the island.

We don’t know much about her as a person before the island until her boyfriend and friend show up floating on a raft days later. Our own innate humanity causes us to create a heady bond with Jenn. When push inevitably comes to shove in life, we are often forced to become scrappy and clever to navigate the treacherous slopes of existence. Jenn represents that drive.

When Jenn’s boyfriend Lucas (Emory Cohen) and friend Mia (Hannah Mangan-Lawrence) arrive on the island, we learn that the island itself is not the only adversity that Jenn has faced in her life.

Lucas and Mia waste no time in gaslighting Jenn about not only her experiences with the monster on the island but the events of her past. Jenn has received the reputation of being a liar, though it is heavily implied that she is in fact not. Her ordeals have been reduced to mere attention-seeking behavior and nothing more.

Lucas and Mia degrade Jenn, embarrass her. They open up old wounds without a second thought. Instead of trying to work with Jenn, they’re berating her and questioning her every action and motive.

At this point, Jenn is distraught and desperate and, above all, afraid. 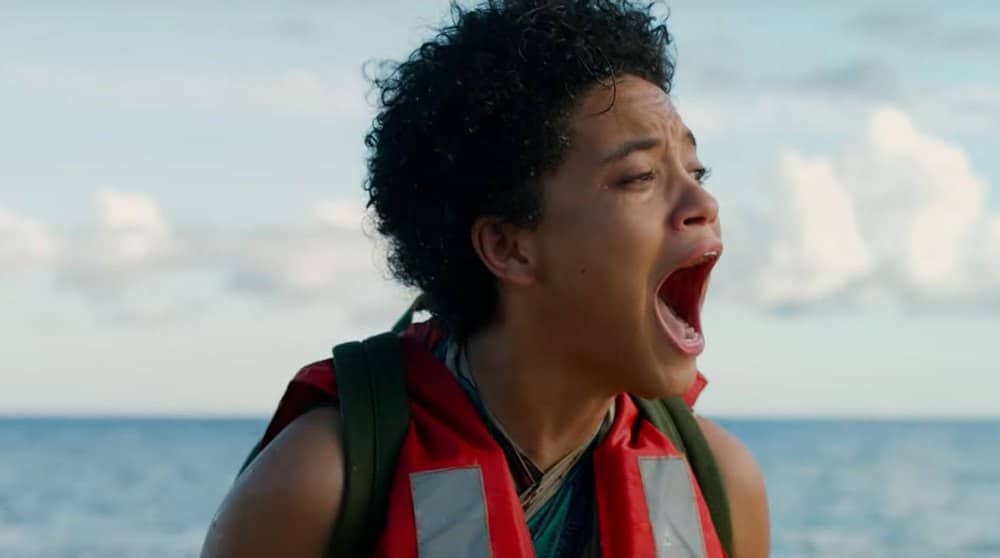 When Lucas and Mia arrive, it is hinted that they killed another member of their friend group while on the raft.

The people who she should be able to trust have become another force that she must contend with. It makes the viewer wonder what emotional trauma Jenn has endured before washing up on the island.

Gaslighting is when people manipulate others to question their own perceptions of reality and even their own sanity.

It’s a disorienting phenomenon where people find their own issues and concerns diminished. Gaslighting can occur in any kind of interpersonal relationship. It creates an unbalanced power dynamic and allows one person to gain more power over another.

Gaslighting leaves the victim vulnerable. The person committing the gaslighting will dismiss the concerns and feelings of the victim.

There’s a good reason that many horror movies feature gaslighting as a prominent facet in them. 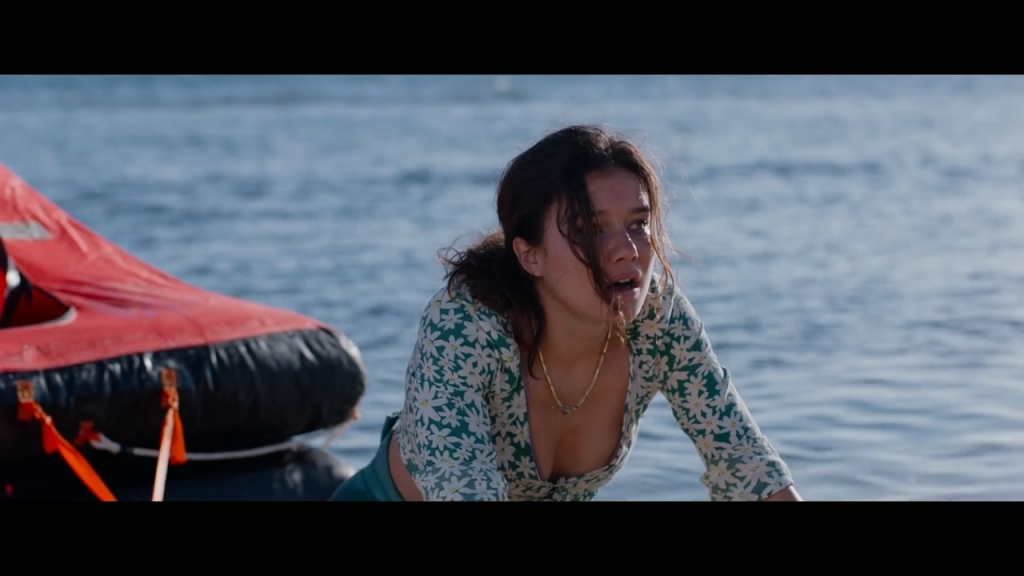 Gaslighting is its own piece of real-life horror. Imagine constantly being told you’re crazy, you’re too sensitive, that events did not happen the way you perceived them or did not happen at all, and that you’re hysterical. Gaslighting leaves room for doubt in your mind even when you know the truth.

Mia and Lucas physically assault a distraught Jenn when she becomes hysterical in her desperation to leave the island. Lucas only believes Jenn about the monster when it kills Mia. Mia’s death is a weird moment of vindication. It proves that Jenn should have been believed, that their defensiveness and gaslighting were byproducts of their lives pre-shipwreck.

Lucas and Jenn have a failed attempt at leaving the island, and the monster claims Lucas’s life during the attempt. It is when Jenn is left alone again she realizes that if she cannot run she must fight. It’s at this moment Jenn truly takes control of her own narrative. She decides that she won’t allow her story to be shaped by anyone but her.

She leaves a note detailing the events on the island and her own issues with not being believed in the past. In the note, she writes, “The truth doesn’t always come with a receipt. Sometimes all we have is our word.”

Jenn taking authority of her own destiny and deciding that she is worth being believed in is empowering. When someone has experienced gaslighting, they often doubt their own logic, even if they know their perception of events is in fact correct.

Jenn comes to invest in herself as we have as the audience.

The pain of not being believed and being gaslighted is palpable in the film and makes it an empathetic masterpiece. It’s difficult not to be involved in a film that offers such a vulnerable and realistically delineated heroine. JD Dillard undoubtedly made a film worth seeking out and talking about.