Support “True Love Inc: A Dangerous Women Horror Comic” about a robot sex-worker who gains sentience and finds herself longing for more. 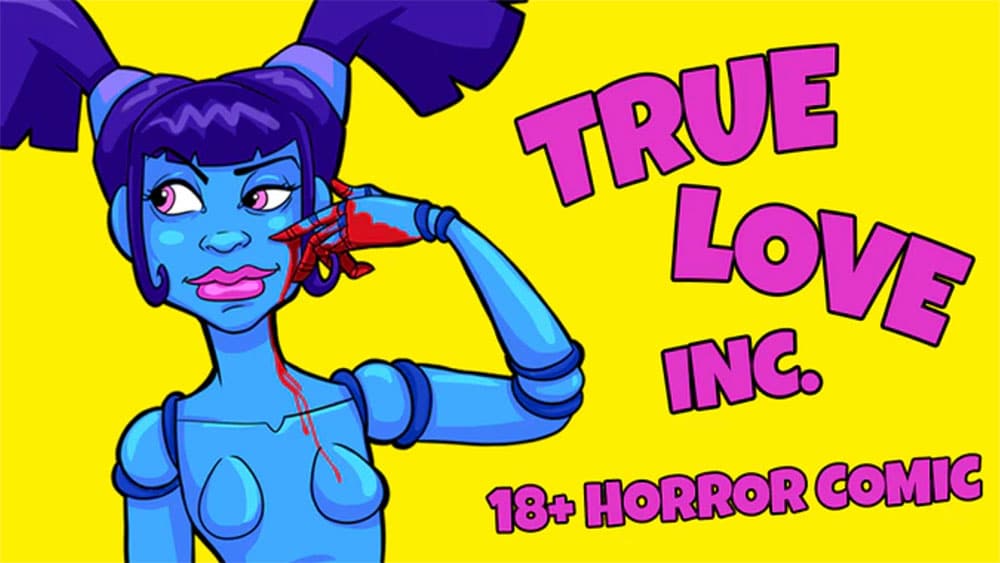 As we approach the end of Women’s History Month, on the heels of Women in Horror Month, we are thrilled to spotlight the work of one of our favorite women in horror. We recently learned that the wickedly talented artist Jaymie Dylan has launched her first Kickstarter campaign — and it’s an amazing one!

Jaymie is raising funds to support her first-ever printed comic called True Love Inc., which will be the first story in her Dangerous Women Horror Anthology.

In the anthology, she will explore the ways women are feared for their sexuality, independence and power — both historically, in modern times, and in a sci-fi future. True Love Inc. will be a 16 Page Full Color Comic, including 14 pages of Story and 2 pages of Concept Art. By backing this project, you’ll not only be doing your part to support independent art, but you’ll also be getting the FIRST story of Jaymie’s Dangerous Women Anthology printed and in your hands!

True Love Inc. is the story of a Mandi-9, a robot-sex worker who gains sentience through an electric shock caused by dropping her research tablet. Suddenly blessed with human consciousness, she finds herself… really bored of her job and longing for something more. She finds it, with horrific results.

Jaymie describes this genre as Psychedelic Feminist Horror, which we could not love more. 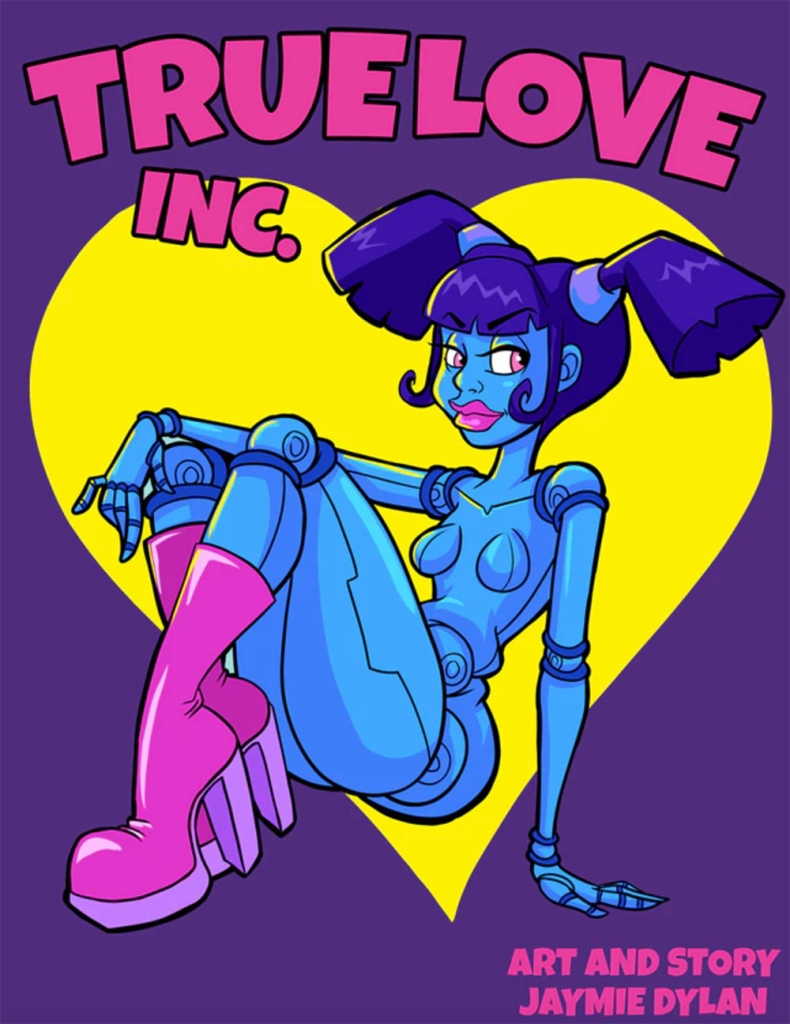 This story started as a very short film when Jaymie was in animation school. She planned to make a short, 3D animated film for her final project. The film would feature a character known as Mandi-9. Instead, she ended up doing a stop-motion animated film with giant clay vulvas (a film we’re dying to see!). But the character of Mandi-9 took up permanent residency in Jaymie’s mind and demanded her turn in the spotlight.

As Jaymie explains, “Sometimes I think a character wants to live. They will just keep coming and tapping you on the shoulder saying ‘Hey! Hey you! Are you just going to let me sit in a sketchbook somewhere?? If you don’t do something with me I’ll find someone who will!’ And they do… so rather than lose her I’m telling her story.”

Jaymie turned her animation storyboard into a 10-page comic. After getting feedback from people she trusted, she reworked the script into a 14-page comic that takes us on the journey of Mandi-9. She explains her passion for this project and her desire to finally bring Mandi-9 to life:

I’m Kickstarting True Love Inc. because I have held onto Mandi-9 for far too long, and the world needs more sexy, fun, horror stories written and drawn by women.

The campaign launched on March 1st and quickly met and surpassed the initial fundraising goals.

Now, with just five days left in the campaign, you still have time to be a part of this extraordinary project, while taking advantage of some killer stretch goal perks. 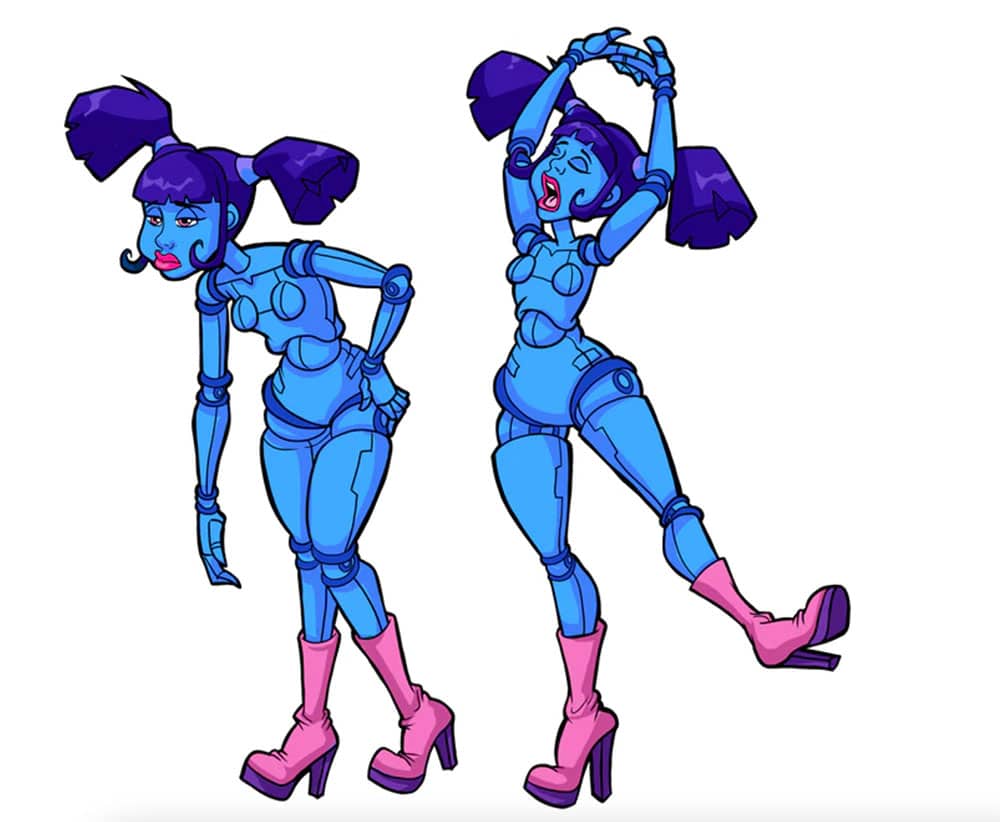 While the comic is not yet complete, the script is final and Jaymie has already completed several colored pages and the cover of the comic. She is Kickstarted to finish the creation of the comic. Contributors will get regular updates as she finishes the creation of the comic. She plans to complete the comic within two months after the campaign is funded and start shipping one month after that. So, unlike many campaigns that take months — sometimes years — to distribute product and perks, you shouldn’t have to wait long at all to get the rewards from your financial support of this project.

In addition to the comic itself, rewards include a hand-drawn marker sketch of Mandi-9, an 8.5 x 11″ color print, a full-color art commission character of your choice, or even the chance to appear in the comic itself as either a client of Mandi’s or a victim! Amazing stretch goals have already been unlocked, including a holographic sticker and a PDF of early sketches and concept art. Additional perks are close to being unlocked as well. Don’t miss out…contribute today!