“Vaporum: Lockdown” for PC and Switch is a surprisingly deep mashup of old-school RPG mechanics and horror/steampunk stylings. What goes around comes around, and what was old is new again.

There has been quite the renaissance happening in the gaming community these past few years, both in the digital realm as well as on tabletops. Physical games like Dungeons & Dragons have seen an increase in popularity, and retro games are all the rage on PCs and consoles. From 8-bit throwbacks to Metroidvania clones, many smaller developers are looking backward for their latest offerings.

And why not? Development costs on retro-style games are cheaper, they can be produced quickly, and the finished products generally end up tickling the nostalgia factor for many gamers (myself included).

And although the first-person, grid-based RPG might have reached its pinnacle 30-ish years ago, nobody seems to have told that to a few modern game developers. This includes Fatbot Games, an independent outfit based out of Slovakia. Despite having only two titles to their name, they have managed to stand out in a growing crowd.

Though Vaporum: Lockdown (V:L) is their sophomore effort, it is actually a prequel to Vaporum, which was released in 2017. 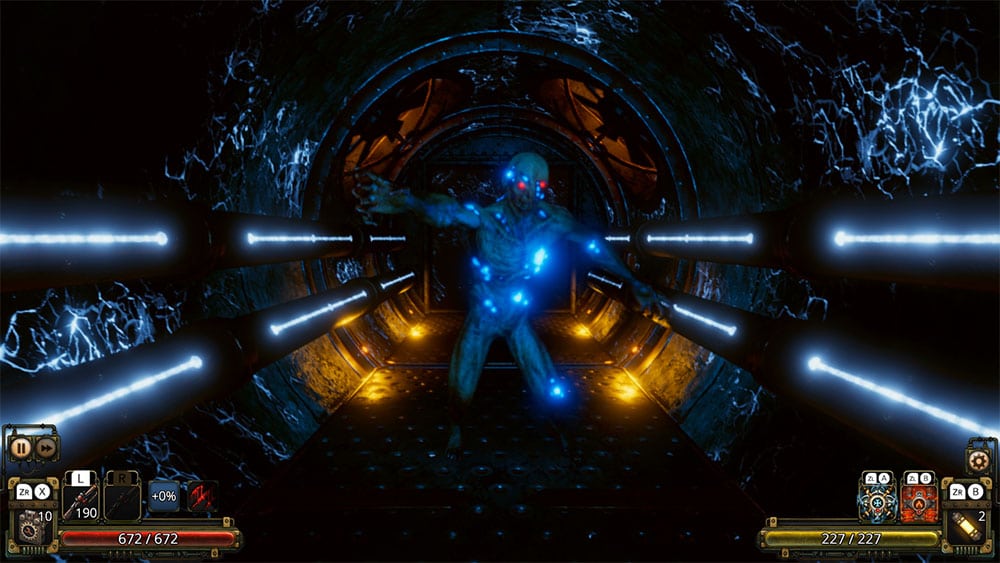 The story follows Ellie Teller, a mechanical technician sent to perform maintenance on the Arx Vaporum, a mysterious tower of unknown origin that resides in the middle of a vast ocean. The gigantic Arx houses untold wonders and amazing technologies far beyond what society has created. Under the strict control of the Supreme Bureau, a quasi-scientific organization with questionable motives, workers like Ellie have been shipped in to study the technologies and reverse-engineer them when possible.

But, shortly after her arrival, things go horribly wrong, and Ellie must use her wits to survive the tower and its deadly designs.

Very few games have a unique concept anymore, and V:L is no different. It is basically what you would get if Legend of Grimrock, Dead Space, and Bioshock all got locked in Jeff Goldblum’s teleporter from The Fly right as it was activated.

Note that this is not a criticism of the game so much as a general observation. There is nothing wrong with cribbing from the greats. However, unlike most other dungeon-crawling RPGs (including Grimrock), V:L is a strictly single-party experience. Players are stuck in Ellie’s boots from start to finish. So, it’s a good thing that she’s a decently enjoyable protagonist, full of snark and sass.

Narratively, the game follows a lot of the same plot points and narrative format as Bioshock, even down to the extended exposition dumps being delivered via conveniently placed voice recordings. Only instead of going deeper into a dangerous facility, Ellie must traverse higher and higher in her quest for answers and escape. Along the way, she will battle a whole host of enemies, from steampunk automata and irradiated creatures to human guardians and…other nasties best left unspoiled.

The story itself is serviceable, though nothing terribly original. 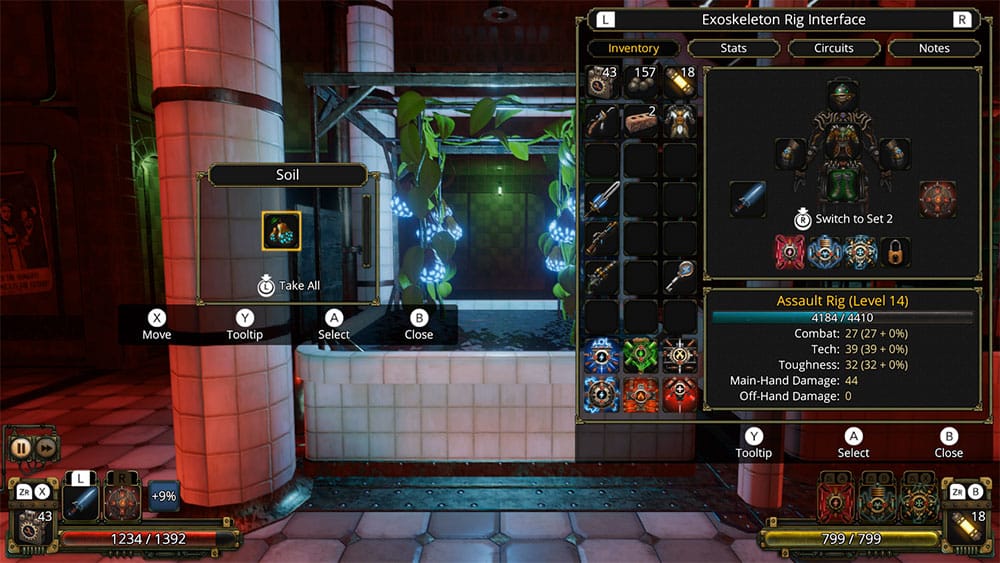 Much of the actual tale itself is conveyed through found notes and journal entries, along with the voice recordings. It’s really up to the player how deep they want to delve into the lore.

V:L is also a very linear game, so players looking for some open-world action will be sorely disappointed.

Instead of the traditional RPG skill paths, gameplay in V:L revolves around choosing one of several exo-suits, each with its own focus. This is where the comparison to Dead Space comes from, as different aspects of the suits can be permanently upgraded for focused stat boosts.

While there are no “named” classes like fighter, ranger, or mage, the exo-suits emulate those archetypes somewhat by increasing abilities such as ranged damage, melee damage, and gadget efficiency. Gadgets are V:L’s answer to magic; steampunk-inspired tools designed for either offensive or defensive play. But instead of mana, gadgets run on Fumium, which is essentially magic and technology combined into one convenient package.

One of the things that separate V:L from other games of its kind is the fact that exploration is not only strongly encouraged but almost mandatory.

Named weapons, permanent skill upgrades, and additional healing kits are all hidden behind breakable walls, within puzzle rooms, and down corridors that are off the beaten path. None of these hidden items are necessarily required to beat the game. However, progress is significantly easier if a few secret areas are uncovered for their special rewards. This is compounded by the fact that enemy loot drops are completely random.

In my first playthrough, most enemies dropped healing items each and every time they were defeated. In my second playthrough, they were a rare commodity that I had to hoard.

It must also be noted that while V:L is an RPG through and through, with combat aplenty, it is also very puzzle heavy. 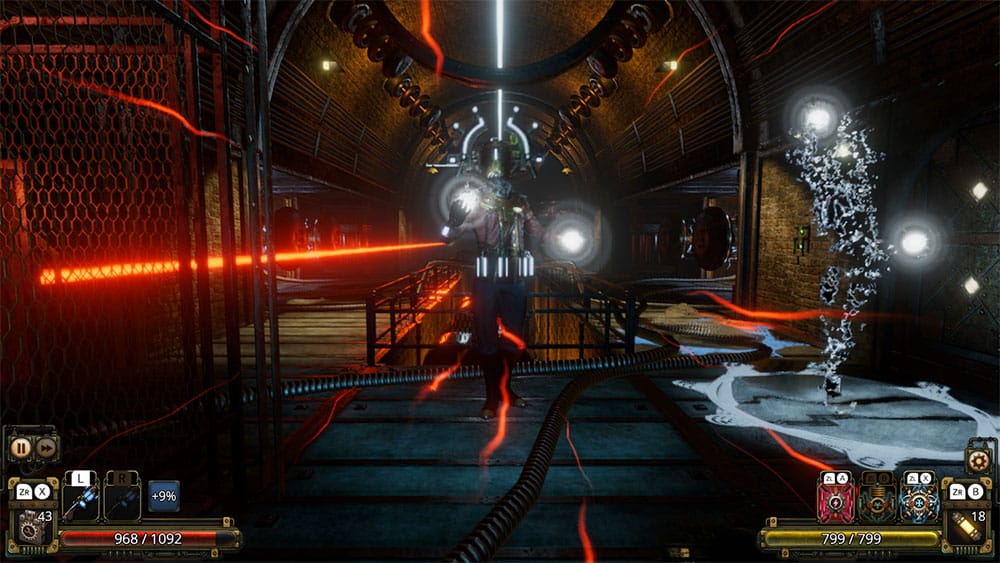 Heavy to the point where there are just as many puzzles to solve as there are enemies to kill. And they range from simple to maddeningly complex. My brain was challenged on multiple occasions.

From pit traps to flame jets, and from hidden switches to pressure plates, the gaming mainstays populate the Arx Vaporum in abundance.

As a grid-based game, V:L controls slightly differently than most other first-person options out there. As in there is no diagonal movement whatsoever. Ellie moves one square at a time, in one direction at a time. But that goes for enemies as well. And while most games like this are turn-based, V:L takes place in real-time.

Though this is not a twitch game by any means, positioning and movement during combat can still be highly effective when done correctly. This is especially true of strafing. There IS a time stop mechanic that can be used, where the enemies only move when you move (a la Super Hot), but I found that playing the game that way diminished the overall experience.

V:L is meant to be tense (though not scary), and robbing it of that tension really ruins the game’s core concept.

In keeping with the old-school leanings, what you see is what you get. 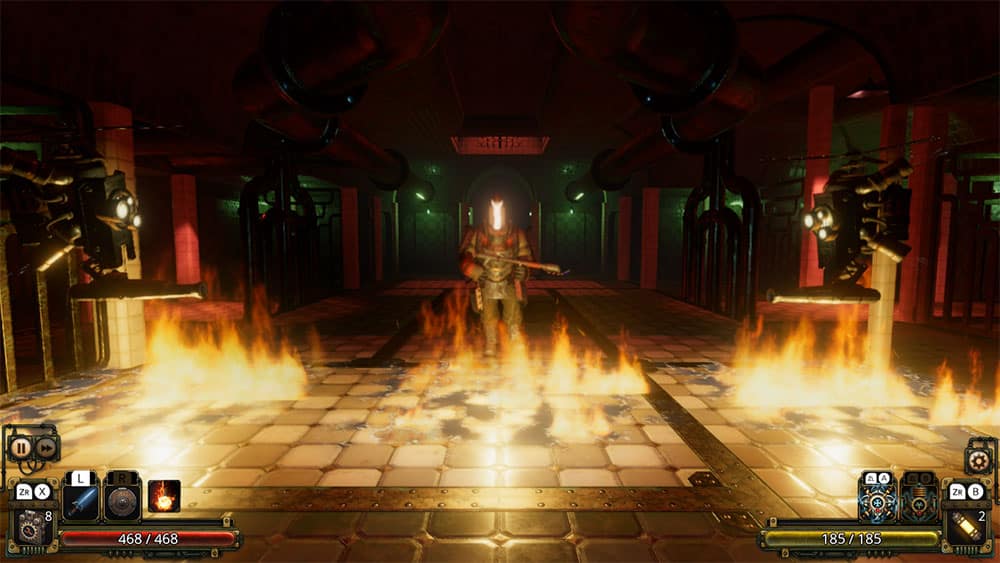 While many modern games have numerous other modes and features in order to appeal to a mass audience, V:L is strictly focused on combat, exploration, and puzzle-solving. There is literally nothing else.

Want to sell your unused gear and items to a merchant? Not possible, because there aren’t any. Want to build better gear with some kind of crafting system? Well, too bad. Want to try out how the other classes play? Better start a new playthrough because the exo-suit you pick in the beginning is the one you’re stuck with for the rest of the game. Again, this is how old-school games were designed.

No fluff. No frills. Very little player agency. Gamers were expected to hit the ground running.

And I’m perfectly ok with that.

I can respect a game that isn’t trying to be anything other than what it was designed to be. Just remember to manually save the game frequently.

The auto-save feature kicks in before major encounters, but not before minor ones, and it is extremely frustrating to lose minutes and minutes of puzzle progress due to accidentally falling down a pit trap. Save early, save often!

But, even though the game has my respect, I still found a few cracks in the tower’s facade. 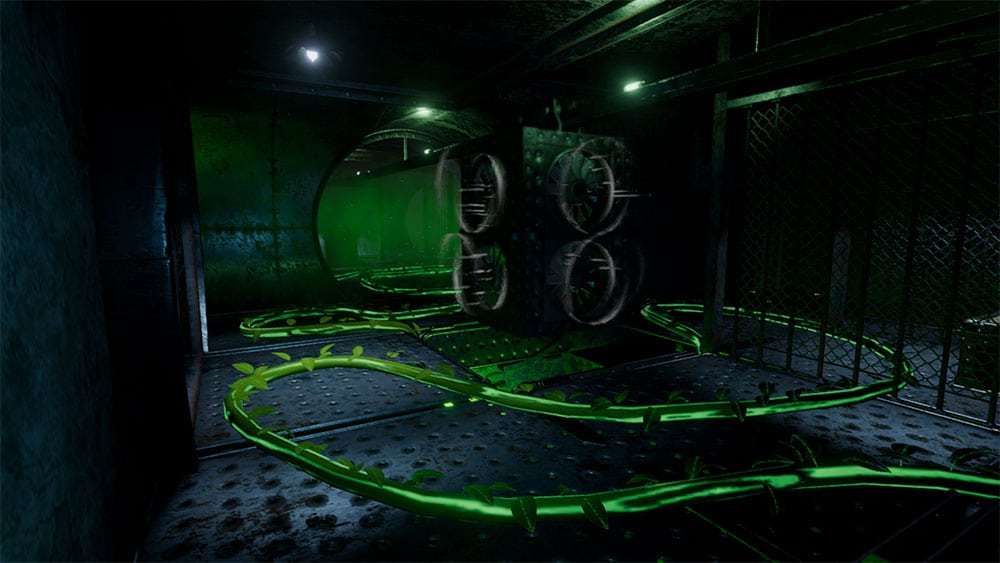 One of the biggest issues I had with V:L was with how the controls were mapped. Gadgets, healing kits, and energy kits are all controlled by the A, B, X, & Y buttons, but are queued up by selecting the left and right triggers. For some reason, I was always mixing up which trigger activated which sets of support items. So I would heal when I was trying to use a flamethrower gadget, or vice-versa.

After a while of playing, it became a non-issue. But man, it sure did take me longer than I would have liked. In fact, all of the controls took longer to acclimate to than I’m used to, though I’m willing to concede that I might have just been a slow learner.

Also, it is very evident that this is a port from the PC version. The game was clearly designed for mouse and keyboard input, as some of the puzzles require the player to free look and locate switches with pinpoint accuracy. These functions are handled awkwardly on the Switch controllers.

The only other significant problem with the game is that, due to it being a niche title, it will only appeal to a certain subset of RPG gamers.

Role-playing games are my bread and butter, and even I had a hard time adjusting my mindset back to the sheer simplicity of V:L. But don’t mistake simple for easy. Even on normal difficulty, V:L is a hard game. Once you’ve mastered the weird controller scheme, and learned the enemy attack patterns, things do get a little easier. Emphasis on “little”.

Fair warning: gamers who need their hands held will have a very rough time making it to the end credits in VAPORUM: LOCKDOWN. Click To Tweet

All in all, V:L is a pretty solid entry in the dungeon crawler genre. 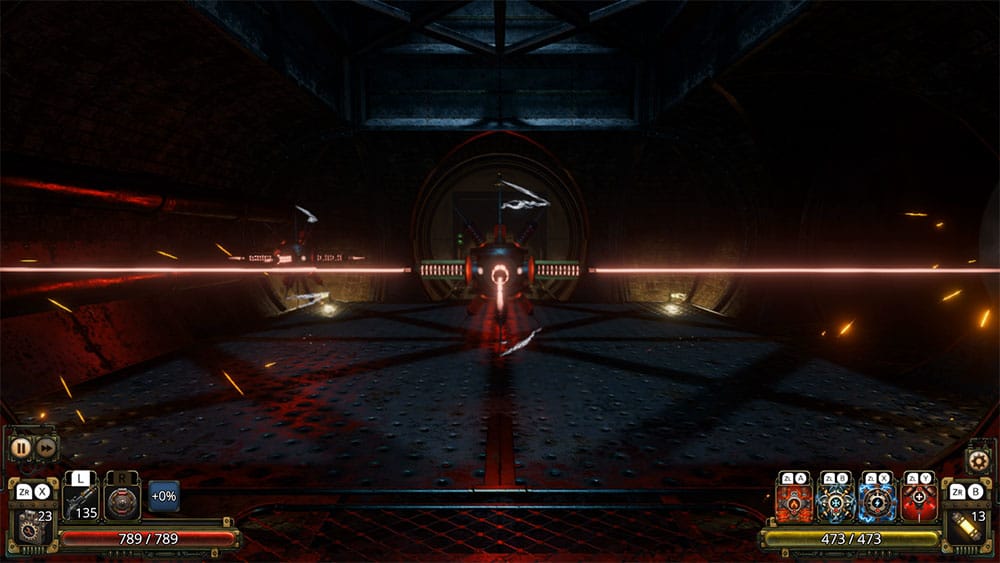 The graphics on the Nintendo Switch won’t be winning any awards, but the game has a distinctive art style that really gives it a strong sense of identity. Because, while graphical fidelity is great, a compelling atmosphere is better.

Voice acting ranges from passable to good, with Ellie herself standing out the most. The soundtrack is decent and helps set the oppressive tone rather well. For an independent developer, Fatbot really knows how to create a solid package. They knew exactly the type of game they were making and stuck the landing with style. Dark and mysterious style at that.

Though Vaporum: Lockdown undoubtedly plays better on PC, it still manages to be thoroughly engaging on the Switch.

Fans of steampunk and/or old-school role-playing games should absolutely give it a try.