This installment of the Girls Guide to Horror spotlights classic and modern creature features that every budding horror fan should know.

We started by looking at teenage terrors and then moved to foundational horror classics, followed by essential foreign frights and gothic genre gems. For part 5 of the “Girls Guide to Horror”, we’re recommending some crucial creature features worthy of devouring. 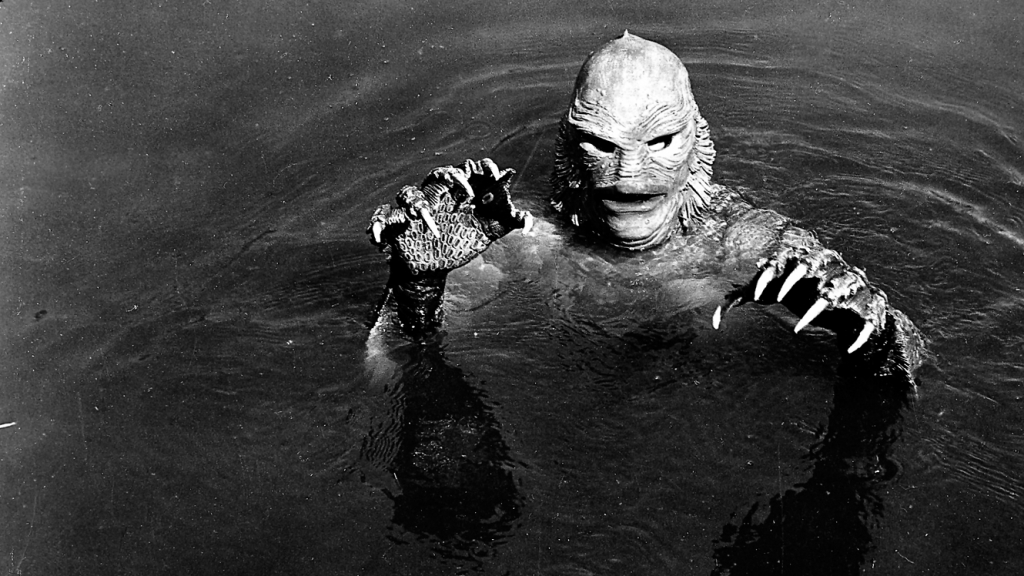 Creature from the Black Lagoon is perhaps one of the most iconic movies ever and is a staple of the Universal Monsters.

The titular creature is a sympathetic monster whose home is encroached upon by outsiders on a geology expedition. The monster becomes enamored with Kay Lawrence, the colleague and girlfriend of Dr. David Reed. It’s difficult not to feel for the monster over the course of the film, and it’s all too easy to see how this film inspired Guillermo del Toro’s The Shape of Water.

Creature is a gorgeous film and still holds up as a crowning achievement of monster cinema. 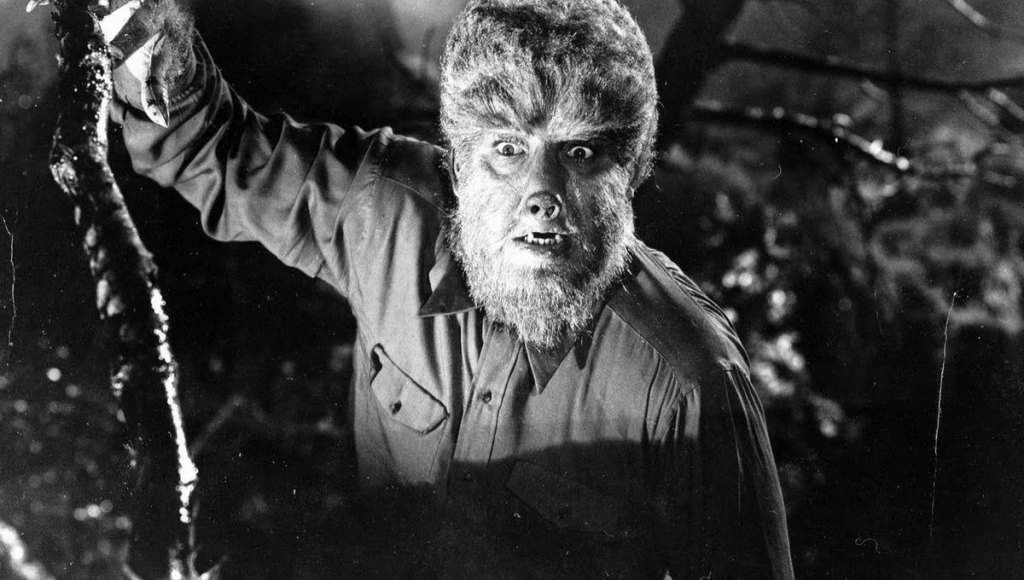 Another one of Universal’s popular monsters can be found in none other than The Wolfman.

Larry Talbot returns to his Welsh roots in order to reconcile with his estranged father and bury his deceased brother. He soon develops feelings for a local woman by the name of Gwen Conliffe and of course, like many monster movie romances, the relationship is doomed from the start. Larry finds himself bitten by a werewolf and on the precipice of becoming one himself.

Parts of the film are sorely outdated, such as the views on Romani peoples, but it is one of the formative werewolf films and still deserves to be watched with a critical eye. 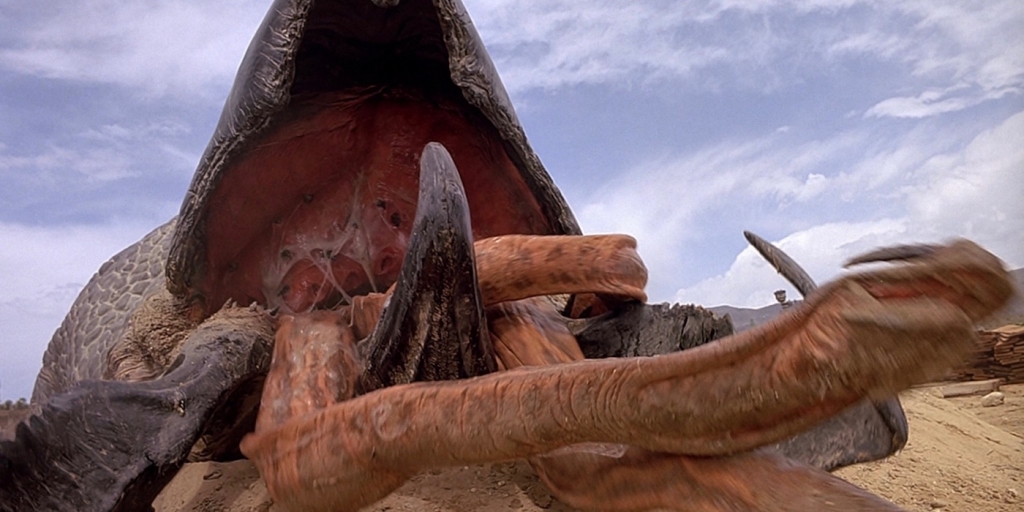 Tremors is a film from my childhood that I could not get enough of. As an adult, I still get a kick out of the sublimely underrated horror fare from my youth.

Kevin Bacon stars in a film about subterranean worms that terrorize the desert town of Perfection, Nevada. It’s as wild as it sounds, but it’s unbelievably entertaining. The creature design is fascinating, and the action and vivid characters make for an unforgettable experience.

I hope someone out there enjoys this little slice of my '90s childhood. 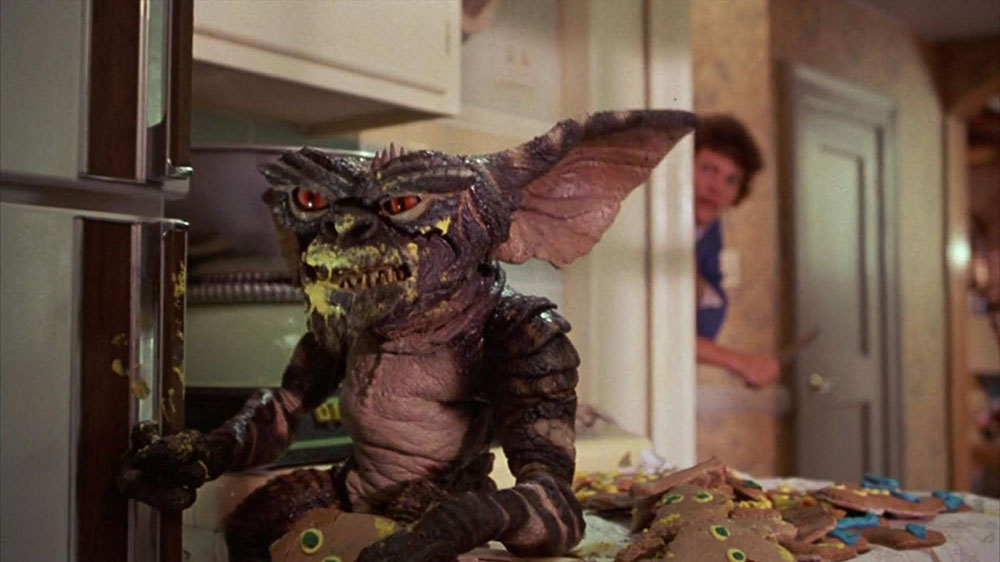 Gremlins is a formative bit of gateway horror for many a kid, but there are those out there that might have missed this one in their younger years.

Billy receives the adorable mogwai Gizmo as a Christmas gift from his bumbling father. Gizmo comes with special rules that are meant to either keep him from perishing or accidentally multiplying. When Gizmo becomes wet, he produces more mogwais. Of course, that bit of chaos happens, and the mistake is furthered when Billy erroneously feeds the new mogwais after midnight.

Chaos compounds and reigns in a film that manages to be cute, funny, and horrifying. 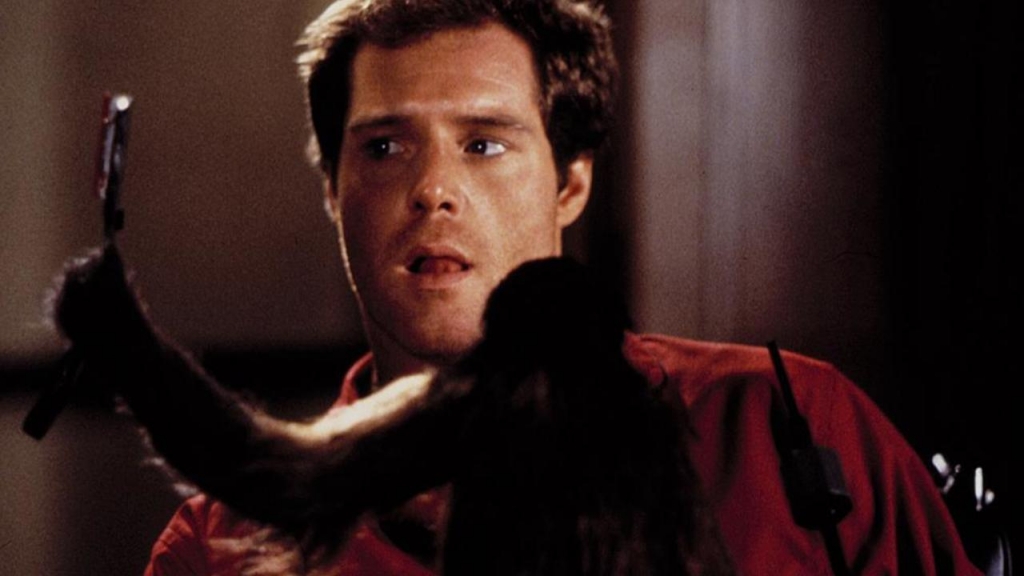 George A. Romero is best known for Night of the Living Dead, but his 80s film Monkey Shines deserves a watch as well.

The film follows Allan, who becomes a quadriplegic after an accident. Allan’s despair over his situation leads his scientist friend Geoffrey — who happens to be studying and experimenting on primates — to provide Allan with a capuchin as a service animal. The capuchin is trained by specialist Melanie and is named Ella. Ella and Allan share a special bond that soon sours when Ella begins to kill all those who either anger Allan or she sees as a threat to her relationship with Allan.

Come for monkey madness and stay for meditation on disability and a sweet romance. Mimic might hit a little too close to home while we’re still in a pandemic, but films that explore how science can run amok are always interesting to watch.

Guillermo del Toro is known for his use of insects and other creepy crawlies in his films, but Mimic takes that to a whole new level. At the outset of the film, a disease that is killing children is being quickly spread by cockroaches in Manhattan. Entomologist Susan Tyler creates an insect she calls the Judas Breed that will eradicate the disease-carrying cockroaches and then die themselves to prevent an invasive breed of insect from taking over.

She’s successful, but the Judas Breed didn’t die off — they adapted.

Terrifying bugs abound, and you will likely never be the same again when looking at a particularly large praying mantis or any other bug for that matter. 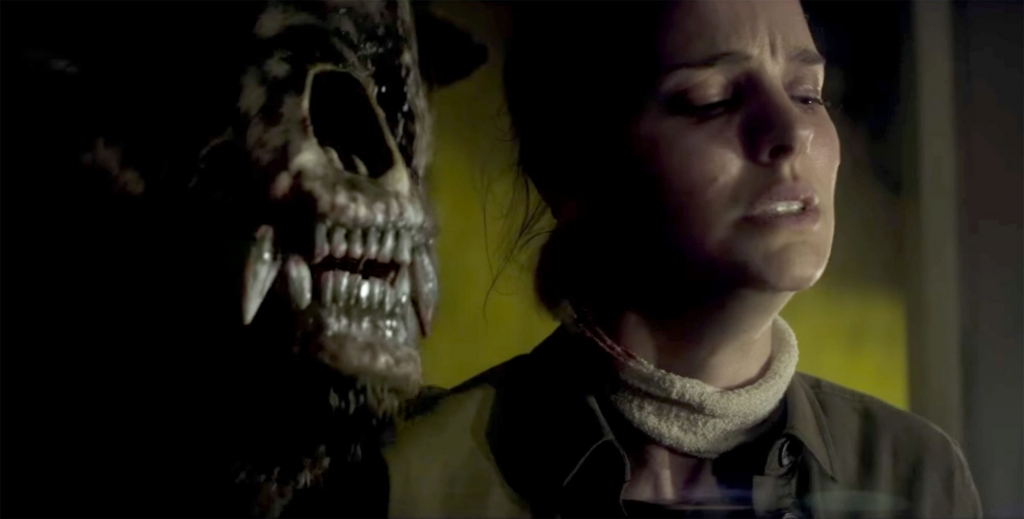 Annihilation is genre-bending and breathtaking.

A meteorite brings with it devastation and force known as the Shimmer that changes the biology and warps all around it. Lena’s ventured into the Shimmer on a mission and went missing before returning home a year later. Lena — determined to discover what happened to her while in the Shimmer — signs up to go on an expedition using her expertise as a biologist.

The creatures in the Shimmer are menacing hybrids, and that is why this remains an underrated creature feature as well as a thrilling sci-fi horror confection. 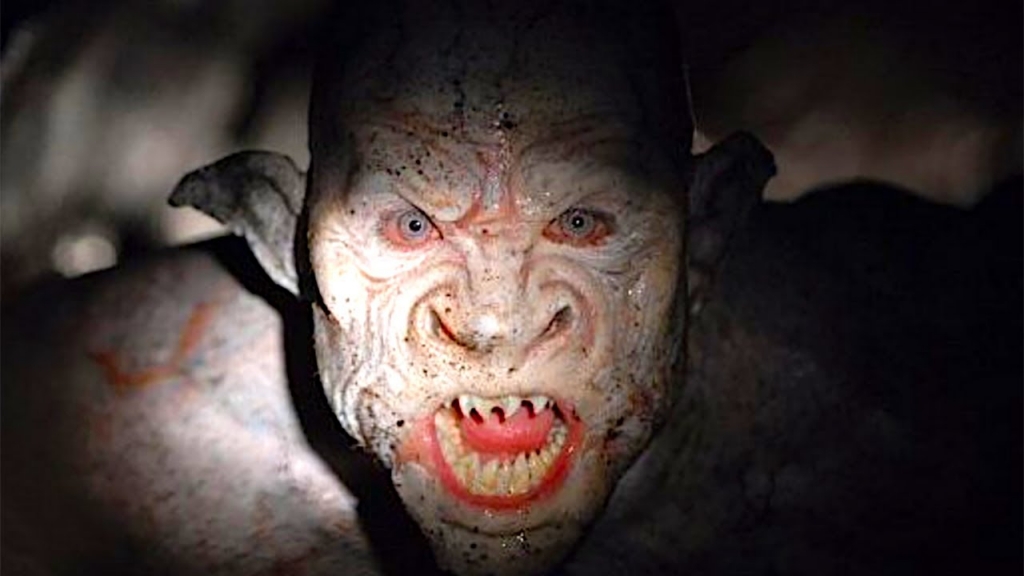 Caves are creepy. Take it from a gal whose mom was a tour guide at a cave and spent time in said cave for fun photographing salamanders and bats. There wasn’t a time I ventured into the cave that I did not think about The Descent.

Six women — all experienced cavers — go on a trip a year after one of them, Sarah, experiences the tragic loss of her family. It seems like a straightforward film of thrills and chills, but it gets amazingly dark along the way — and I don’t mean that just because we’re in a cave.

There are subhuman cave dwellers as well as backstabbing besties. I’m not sure which of those is worse, but when combined it’s a veritable hell. 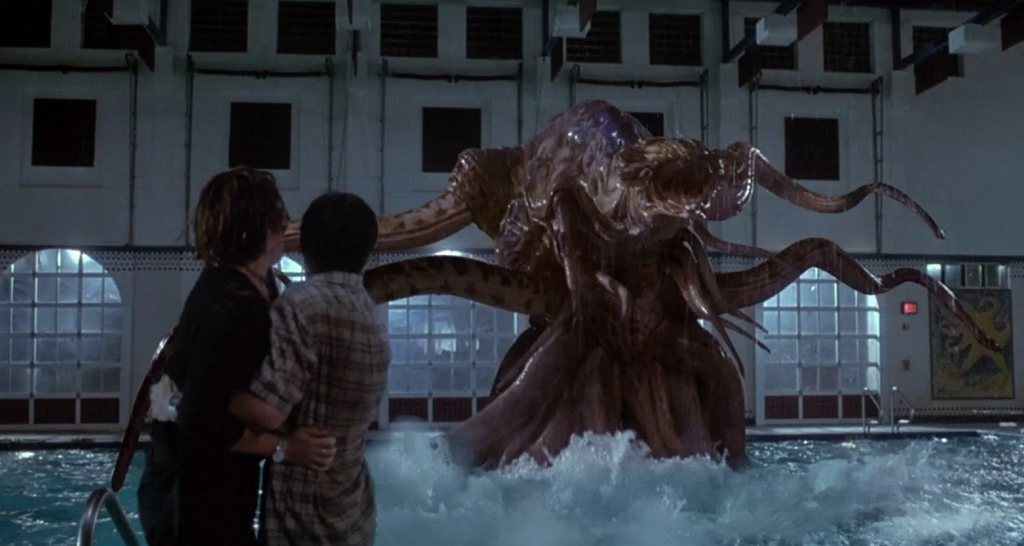 The Faculty is pure 90s fun. While it doesn’t get as much love as other Kevin Williamson-penned 90s horror flicks like Scream and I Know What You Did Last Summer, it is worthy of all the affection it gets.

Aliens are infiltrating a small-town high school and a ragtag group of teens is forced to stop them before it’s too late. It is just a fun film filled with vibrant characters and has a young Josh Hartnett. What more could we want?

This beautiful time capsule in film form makes for a fun afternoon. 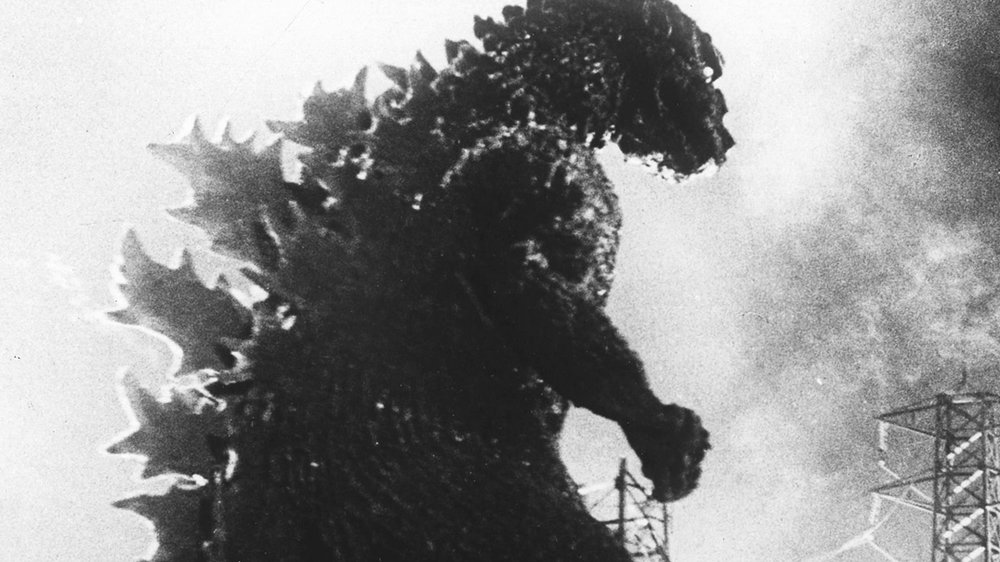 Godzilla is the granddaddy of all monster movies and is proof of how we can tell affecting and important stories through genre media.

The film was released less than a decade after the bombings of Hiroshima and Nagasaki and is a metaphor for the destructive force of nuclear weaponry. Its cultural significance has rippled and made the monster an icon throughout many different countries including America.

This is the film that started a definitive legacy of kaiju films and continues to inspire all sorts of filmmakers and creatives still today.

Creature features are always fun and have been a staple of horror from the beginning. People of all ages and demographics love monsters — or at least they should in my honest opinion.

Monsters can either be fun, frightful, or they can be insightful and haunting metaphors for the evils of the world or how people can be deeply misunderstood. There are very few wrong ways to approach monster films, and that’s why the subgenre offers such an abundance of diversity.

No horror education is complete without delving deeper into some creature content. With the number of monster-related horror movies, there’s absolutely one out there for everyone.

Not a big fan of monsters or don’t see something that interests you? Or are you simply wondering where all the vampire films are? Don’t fret! The next installment will be taking a look at vamps on video.