An ultra-low-budget affair with a killer concept but flawed execution, “Menopause” is a messy blend of camp and commentary. 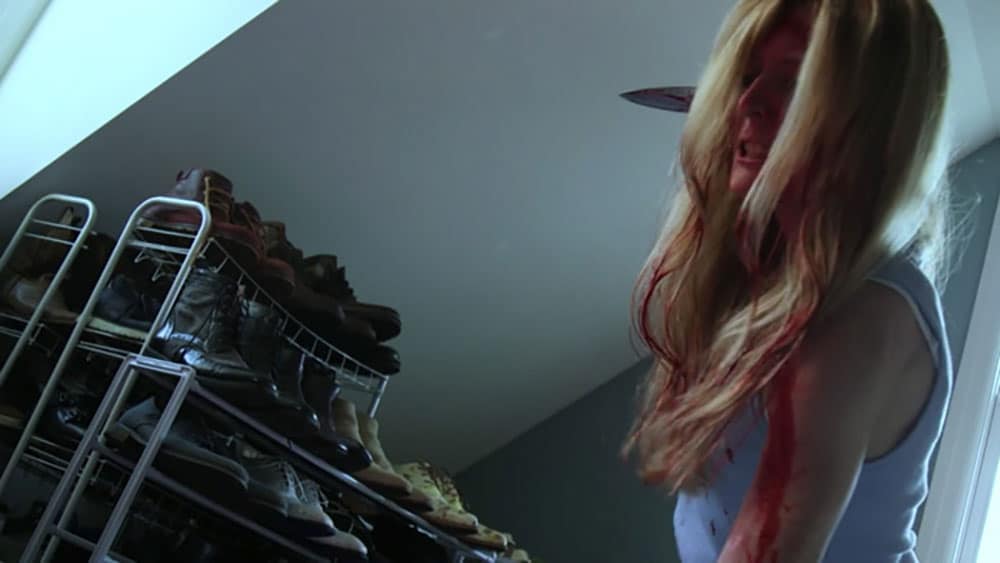 “When do you get that thing? Hot flashes. Santa Clause?” “Do you mean menopause?”

Menopause begins in a brutal fashion, with a close-up POV shot of a blonde woman covered in blood, screaming bloody murder and repeatedly stabbing an unseen victim. She then heads to the fridge, grabs a pint of chocolate Häagen-Dazs ice cream, sits down on the kitchen floor with a spoon, and smiles with immense satisfaction as she dives in.

Cut to a black title screen and the following quote:

“While woman sheds the Blood of Life each moon at menstruation, men can only shed the blood of death through warfare and killing.” – Katha Pollitt

Next, we start to get introduced to our rather large cast of characters and a series of subplots revolving around relationships — the good, the bad, and the very ugly. We meet a woman desperate to rekindle the spark in her marriage while her husband avoids and dismisses her; a cute, quirky young couple who really seem to get each other; a woman struggling in her role as caretaker to her cancer-stricken boyfriend; a shallow man, his vapid gold-digging girlfriend, and his bitter ex-wife; a troubled young woman and her seemingly perfect older sister; and several women in a group home trying to escape their abusive exes.

Almost immediately, I was struck by how low-budget the film felt. And that’s ok. I have a real soft spot for ultra-low-budget, truly independent horror films. I love the creativity, passion, and can-do spirit so often seen in these kinds of DIY endeavors. I can forgive a lot of filmmaking sins — such as uneven acting, bad lighting and sound, and unimpressive special effects — if I can tell a film was made with heart and solid effort.

But I need to offer a word of caution for anyone wondering if the upcoming horror comedy Menopause might be worth 80 minutes of your time.

If you are someone who requires a fair amount of polish from your genre entertainment, this film is not for you.

It’s certainly not one of those movies that make you forget how little it cost to make — no filmmaking prowess or jaw-dropping talent to mask the obvious budgetary constraints. It looks and feels every bit the microbudget affair it is.

In and of itself, that is not necessarily an unforgivable offense. For me, it’s only when a film fails to deliver in other key areas that truly matter — like a great story, compelling performances, and a well-paced and smartly-written script — that any technical issues become glaringly apparent and distracting.

From the film’s title, blood-soaked poster, clever tagline (“Who says the bleeding stops?”), and logline (a solar eclipse turns the women of a New Jersey Town into enraged, psychopaths), you no doubt won’t be expecting high art. But you might rightfully be expecting a bloody good time filled with some dark humor and satisfying kills.

And, let’s face it, what woman out there isn’t at least a little titillated at the idea of seeing a group of diverse women — many of whom have suffered abuse, neglect, and trauma at the hands of men — reclaim their power and quite literally kill the patriarchy?

Conceptually, there’s a lot to love about Menopause. 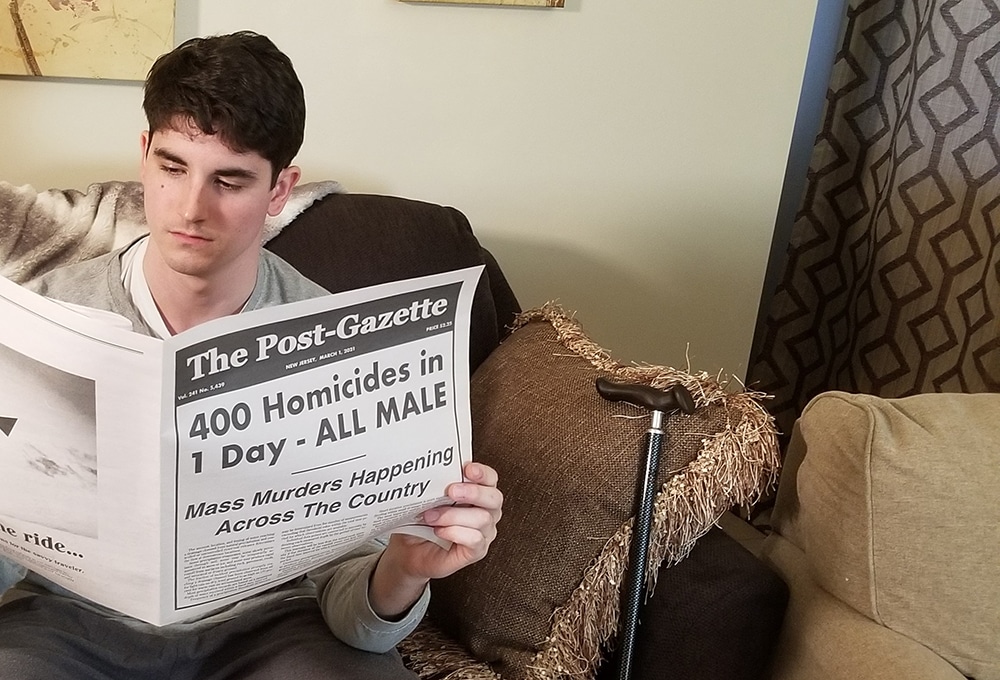 The story revolves around a rare total solar eclipse that seems to be interfering with the menstrual cycle of women everywhere and wreaking havoc on their hormones. The result is an unstoppable bloodlust that causes them to, at first, fantasize about brutally murdering every man they see. Eventually, those fantasies become reality as the hormonal imbalance turns every woman into a man-killing machine.

There’s nothing subtle about Menopause’s message.

For centuries, women have been labeled as irrational, emotionally driven, and hormonally ruled creatures. Perceived as the weaker sex, our life-giving cycle is often perceived as a badge of shame rather than one of pride and power. The fight for equality has been a long and uphill march. Because, despite women being the source of all human life on earth, it very much remains a man’s world.

You won’t find feminist ideals buried behind layers of thought-provoking subtext and allegory. Writer/director Joshua Nelson delivers his critique of society and gender politics in a very overt and heavy-handed way.

There are countless monologues about the ways in which women have been oppressed by men and forced to deny their feminine power.

There’s even an entire subplot about a group of women living at a transitional home for abused women, with frank dialogue about the pervasiveness of domestic abuse and the devastation it leaves behind.

While I applaud Nelson’s desire to tackle such an important issue head-on, it feels misplaced in a relatively silly horror comedy about bloodthirsty babes who briefly stop getting their periods and start gleefully bashing the brains in of every man they encounter. 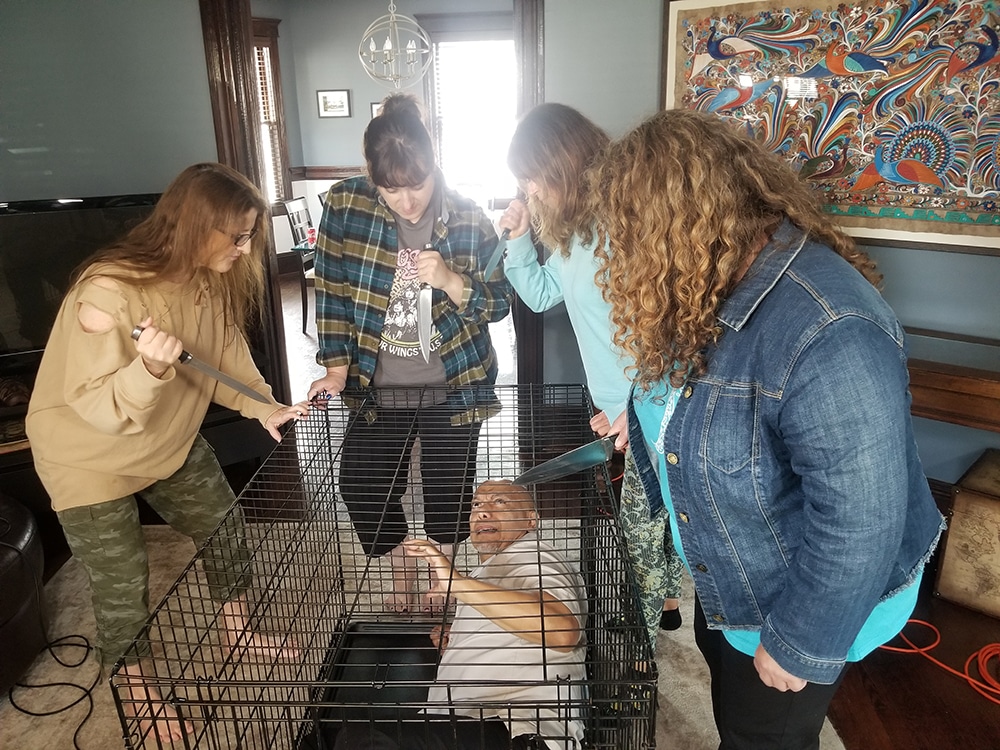 I get that it’s supposed to feel empowering. Some of the men who meet their demise definitely feel like they’ve earned their fate. But most are punished simply for the sin of being men, which fails to deliver the narratively satisfying punch you might expect from a revenge film.

When the same brush that paints all women as weak and inferior turns around and paints all men as misogynistic pigs, it feels like we’re entirely missing the point.

Or maybe that is the point?

Honestly, it’s not entirely clear whether this film should be read as anti-men or anti-women. Maybe it’s not so much about toxic masculinity or toxic feminism as it is about toxic humanity. I could certainly get on board with that, except the film doesn’t really earn that interpretation.

I can hear the collective eye rolls from those who think horror does not need to be political or draw from any deeper well. And that might be a fair critique if it didn’t feel like Nelson was trying so hard to say something meaningful with this film. In fact, the vast majority of the film, at least the first hour, plays more like a character-focused romantic comedy with several characters trying to navigate the trials and tribulations of love and relationships against the backdrop of heartbreak and disappointment.

If Nelson is not trying to say something empowering about the feminist perspective or the strength to overcome trauma, then he’s actively trying to belittle those things, which is obviously a much harder pill to swallow — and I’d love to give him the benefit of the doubt.

Perhaps it’s so hard to decipher the film’s intent because most of the characters don’t feel like real people but rather caricatures of a type of person. 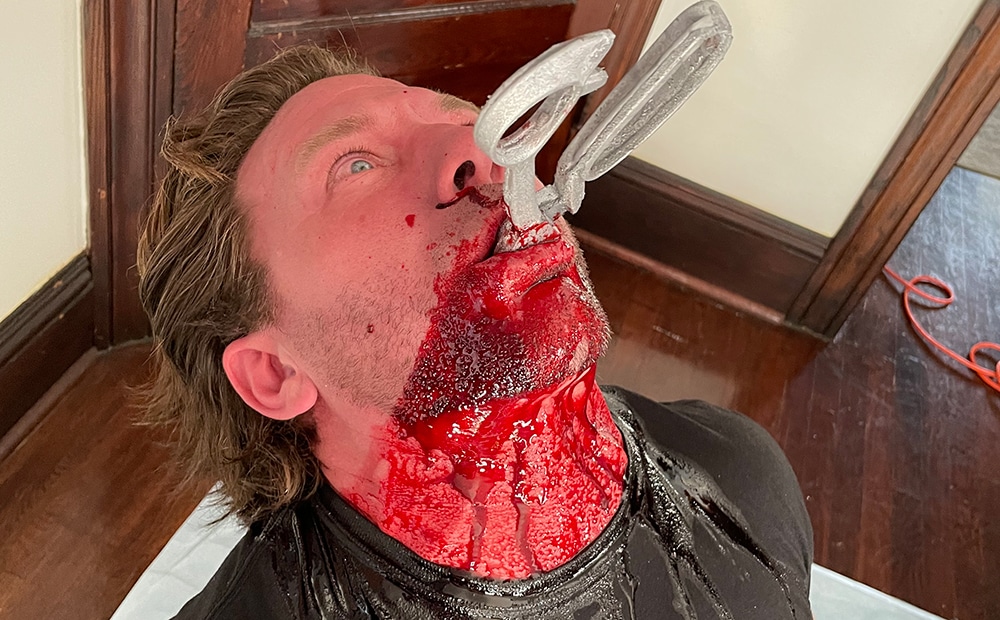 For example, there’s the beautiful, big-breasted woman who only cares about shopping. She’s there, I assume, to show what a pig her boyfriend is; he’s clearly only with her for her looks.

To emphasize this, she is made to be dumb. And not just ill-informed or uneducated, but offensively dumb. I think much of her dialogue is meant to be funny, but she doesn’t know what alimony is (is it an Italian dessert?), doesn’t know what it means when her boyfriend’s ex-wife calls her a twat (she has to look up the definition and is still confused) and doesn’t even know what genitals are.

As it stands, I’m not sure who this film is really for.

Horror fans are likely to be turned off by the exceedingly long build-up where nothing remotely horrific happens. And when the blood does start flowing, it’s not nearly as gory or impressive as you hope it will be. There’s far more implied violence with liberal use of fake blood than there is actual onscreen gore.

I’d say the sweet spot would be found among fans of horror comedies, who are comfortable with far more humor than horror. But there’s not really much humor for most of the film, with most of the attempts at comedy falling flat.

That’s not to say the film is devoid of funny moments. I did laugh a few times toward the end, and the final act is entertaining. While there is a heavy dose of awkward acting, the film was not without one or two standout performances from actresses who seemed incredibly natural and comfortable in front of the camera. And besides being written and directed by a man, it’s a very female-centric film, which is always a joy to see.

I can’t help but wonder how different this film might have been if there was more female talent behind the camera (though it was executive produced by two women, Suzanne Johnson and Jenn Nobile, who also star in the film). I certainly don’t feel like it’s impossible for men to tell female-centric stories, but this story really felt like it could have benefitted fro