Horror on the Short: Ready to Burst

Ariel Hansen ‘bursts’ on the scene with her exceptional debut horror short Ready to Burst, a harrowing tale about a plagued pregnancy 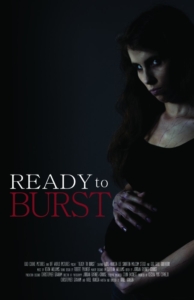 Bad Cookie Pictures is an independent production company founded by Ariel Hansen and Christopher Graham that specializes in genre filmmaking. In addition to providing great horror content, the duo formed the company to empower women both in front of and behind the camera. So, of course when co-founder and director Arial Hansen contacted us to take a look at her first short film, Ready to Burst, we jumped at the chance.

The incredibly talented Hansen also wrote, co-produced, and starred in the film about a woman named Kate (Hansen) who is struggling to get pregnant with her husband Dylyn (Lee Shorten). We find out at the start of the film that she’s been taking what appears to be rather strange looking fertility pills in an effort to aid the process. We also get our first hint that something may not be quite right, as the pills in question are large, black, and quite ominous.

The next day, Kate begins vomiting profusely. A pregnancy test reveals the pills have worked, and she assumes she’s suffering from routine morning sickness. But things quickly escalate. And instead of the typical pregnancy glow, Kate begins to look almost like a walking zombie — getting sicker and sicker and more and more worried that her symptoms are far from normal.

After noticing troubling dark veins across her stomach and experiencing unbearable pain, Kate pleads with Dylyn to make her an emergency OBGYN appointment. In spite of what seems like clearly troubling physical developments to both Kate and the audience, neither her doctor nor her husband seem particularly worried. Instead, they worry more for Kate’s psychological condition. And even more scary pills are prescribed.

As the drama unfolds, we question Kate’s sanity. With everyone around her so calm, even as it appears things are spiraling out of control, we’re left to wonder if what she’s experiencing is real or imagined. Are we simply seeing the world from her fractured point of view? Is she buckling under the stress of a difficult pregnancy? Or is something more sinister at play?

There’s nothing more magical and wonderful as pregnancy and the process of bringing new life into the world. There’s also nothing more terrifying. So much can, and often does, go wrong. Your body becomes a host to a living organism, and you quickly realize you’re no longer in control. You’re just a carrier, and whatever goes right — or wrong — is almost entirely out of your hands.

The idea of having a troubled pregnancy is the worst fear of many women. Hansen brilliantly plays on that fear by taking a very real horror and amplifying it to a terrifying, and quite satisfying, effect.

Ready to Burst does a masterful job building up tension and keeping you hooked to the very end, on the edge of your seat as you anxiously await an answer to the question, “What the hell is going on here?”

The acting is quite strong, especially from Hansen who is exceptional at conveying real fear, pain, and panic. For a low budget short, the effects are quite impressive. The body horror is unsettling and definitely squirm inducing. The payoff is rewarding. It answers enough questions without connecting all the dots — giving the viewer a chance to make some of his or her own inferences. For such a short run time, it’s actually quite a layered story that could easily be evolved into a feature film.

Ready to Burst has been making the festival circuit, including showing at the Final Girls Berlin Film Festival and the Vancouver Badass Film Festival, where it won the Most Badass Local Short. If you get a chance to catch this one, I highly recommend it. And definitely keep an eye out for what this talented team does next.

We have a feeling there are many exciting things to come from Bad Cookie Pictures, and you can stay up-to-date with all their latest projects via their Facebook page.