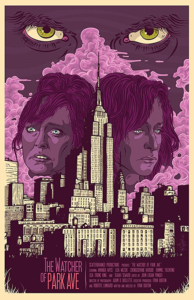 Up-and-coming filmmaker Ryan Burton made horror headlines when he landed two iconic scream queens for his first short film, The Watcher of Park Avenue. The short, which centers around a New York City detective hell-bent on catching a serial killer dubbed “The Watcher”, stars Elm Street alumnae Amanda Wyss (A Nightmare on Elm Street) and Lisa Wilcox (A Nightmare On Elm Street 4 & 5).

We were fortunate enough to be one of the first to check out the new short and talk to Ryan about his inspiration for the film and what it was like working with two horror heavyweights. 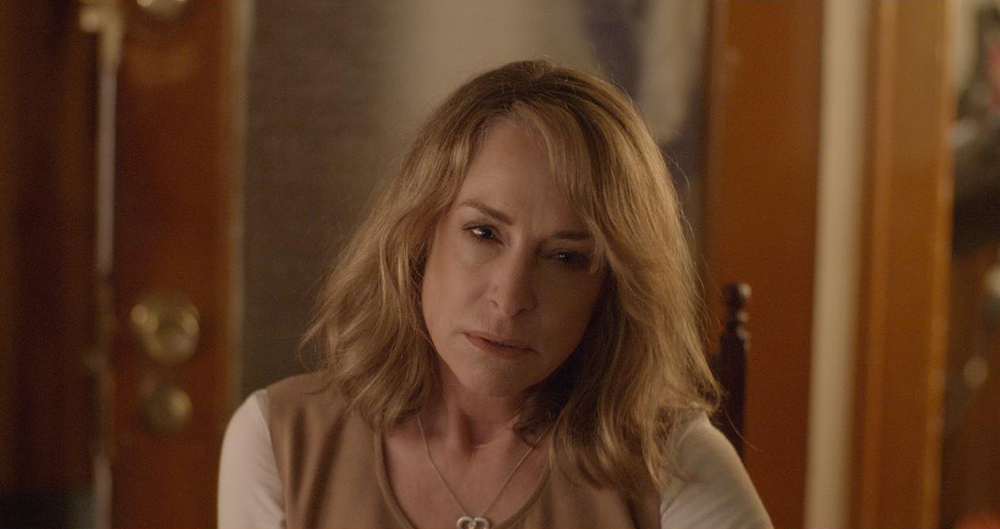 A Nightmare on Elm Street was the first film that introduced Burton to horror and fueled his lifelong passion for the genre, so the casting choice was as much personal as it was strategic.

Amanda Wyss will forever be ingrained in the minds of horror fans for her iconic performance as Tina, Freddy’s first victim in A Nightmare on Elm Street (1984), the film that launched one of the most beloved horror franchises of all time. Following a successful career in television, Wyss made a triumphant return to indie horror in the award-winning psychological chiller The Id (2016), directed by Thommy Hutson, followed by a memorable performance in the horror short Oct 23rd.

It was Hutson who was instrumental in getting both Amanda and Lisa on board for The Watcher, which Burton describes as “a dream come true.” 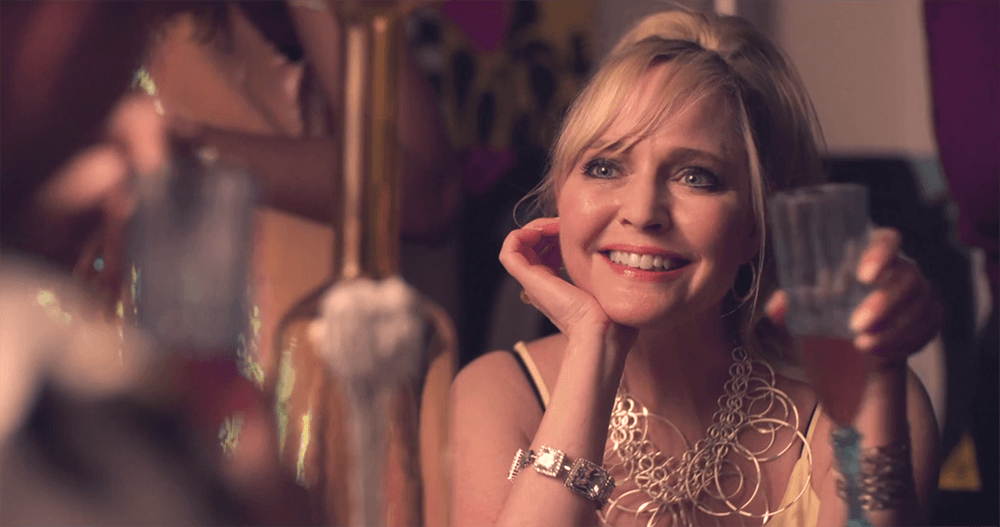 Wyss is always compelling to watch and delivers a solid performance as the no-nonsense detective determined to catch a serial killer who’s been stalking and murdering young women in the city. However, the effervescent Lisa Wilcox steals the show as the comedic relief, the sassy party host Gwen. She gets the best lines in the film, and it’s a real treat to see her flex her comedic chops.

Ryan says the idea for the short came alive in his mind instantly, which almost never happens. He admits that writing can be quite a challenge, but this one quickly took on a life of its own. 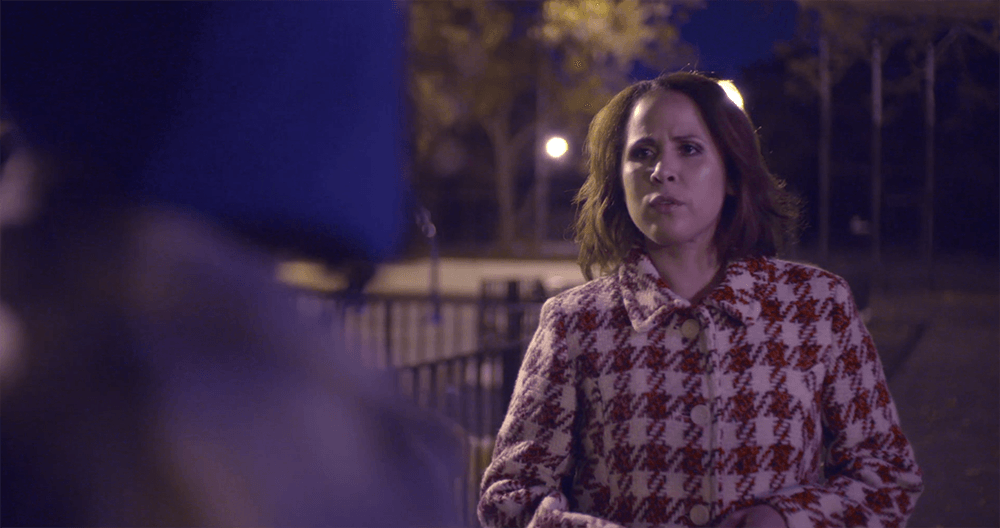 The short begins with a gritty and stylized title sequence and a voiceover of a radio DJ named Tippi (an homage to one of Ryan’s favorite actresses, Tippi Hedron), warning listeners to be wary of “The Watcher”. We’re then introduced to a young woman, Marion (Yaritza Pizarro), waiting outside of work for her boyfriend to pick her up on New Year’s Eve. When it becomes clear he’s not going to show, starting her new year off on the worst possible foot, she begins to make the lonely trek home alone at night through Central Park.

Meanwhile, we cut to a festive New Year’s Eve party. While Marion contemplates a forlorn night alone, a group of friends is enjoying laughter and merriment. We meet party host Gwen (Lisa Wilcox) as she muses on the accomplishments — or lack thereof — of the year with her friend Charlie (Ryan Burton). 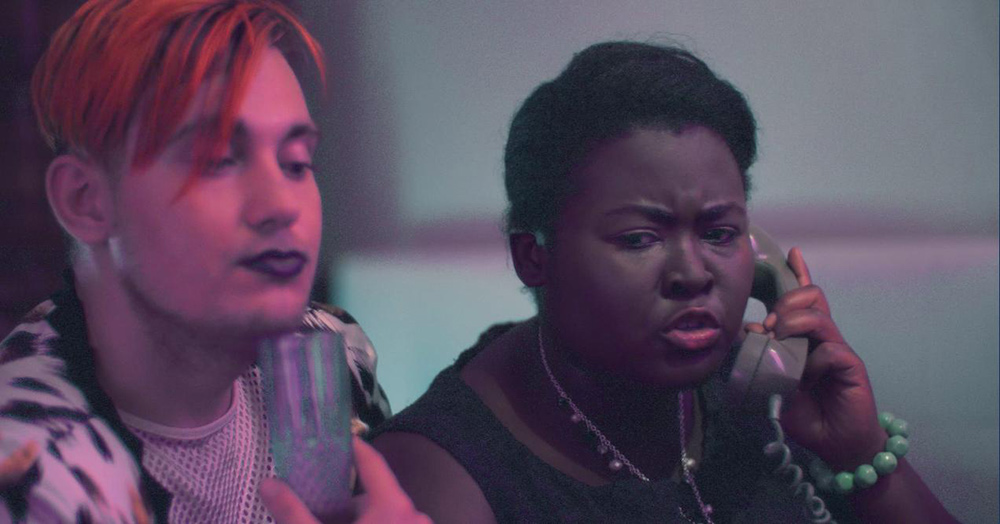 Back to Marion and one of my favorite moments in the short when she encounters a homeless woman on her walk home. Showing her kindness, she gives the woman, Adelaide (Lisa Tirone King), some money for coffee. Adelaide in turn warns Marion about the man who has been hunting women in the city, ominously suggesting the killer is very close.

Burton continues to cut back and forth between Marion’s somber, tension-filled walk home and the bubbly party scene. It’s an interesting dichotomy as we quickly move back and forth between the scenes, which are very different from one another – both in tone and style. I asked Ryan about this unique choice, and he explains, “I wanted to convey that something horrific is happening at any given time on the planet. You can be celebrating a joyous moment and then somewhere else, a life is ending.”

This is poignantly illustrated at the moment when Marion falls victim to The Watcher, taking her last breath at the stroke of midnight as the partygoers gleefully count down to the new year. 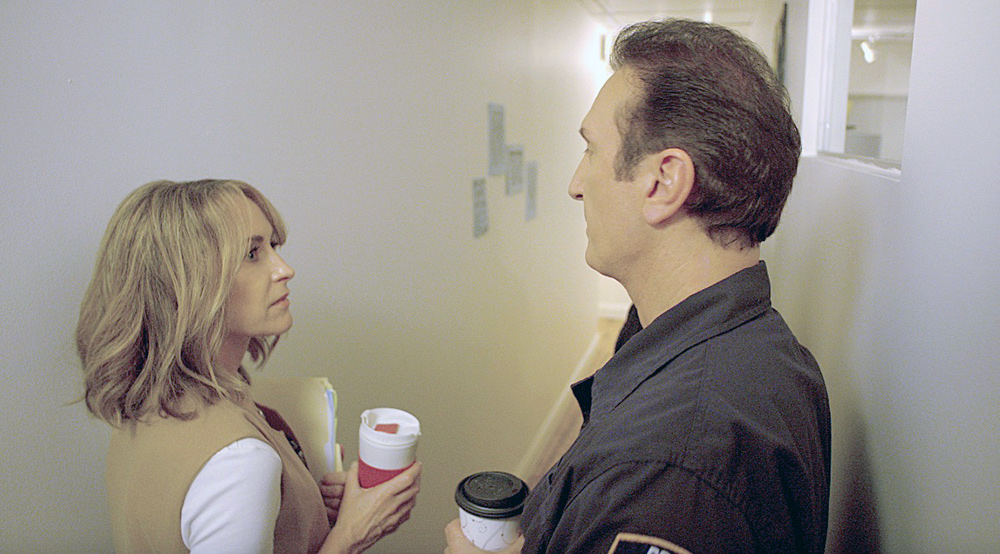 We then meet Lt. Samantha Warren (Amanda Wyss). It’s almost midnight, and she’s still hard at work at the office, desperately trying to solve the serial killer murders that have been plaguing the city. We learn that she’s so caught up in her work that she doesn’t even realize it’s New Year’s Eve, and we get hints that she’s been working nonstop — even neglecting her loved ones.

Back at the party, it’s revealed everyone is not quite as festive as they first seemed. We meet the lovely Blanche Montgomery (Chengusoyane Kargbo), a woman who recently discovered her boyfriend Max (Isaiah Seward) has been cheating on her. As her sadness over her love life gets the better of her, she abruptly leaves the party and heads home alone. Shortly after, Gwen receives an ominous call indicating Blanche’s life may be in danger. 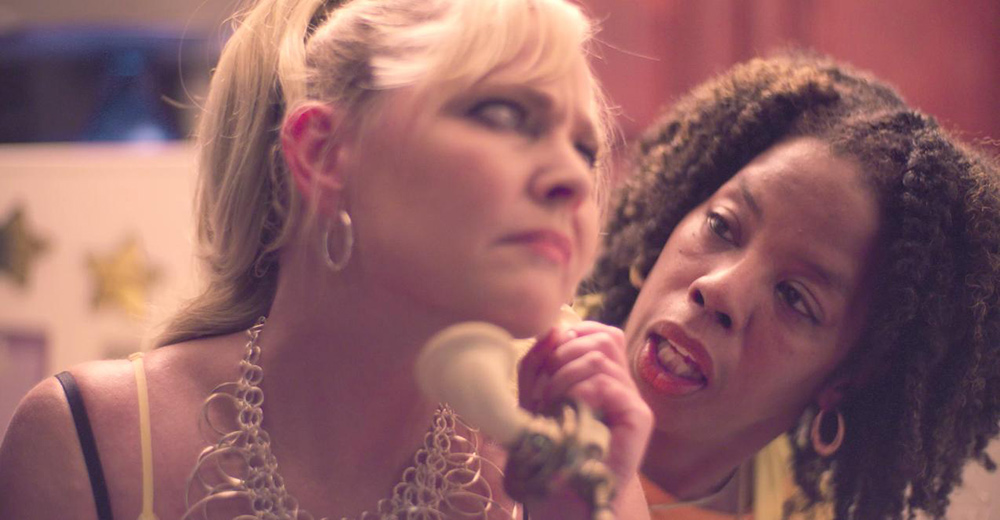 Meanwhile, Samantha discovers a critical clue in the case that brings her one step close to catching the elusive and mysterious killer.

The rest of the short races to its thrilling and climactic finale, with a surprising twist ending that definitely caught me off guard. In fact, it was a cliffhanger that left me wanting to know more — so much so that I asked Ryan if a feature was in the works. He revealed that it was definitely a possibility. Behind the Scenes with Amanda Wyss

While the short is ostensibly about a serial killer stalking women, the killer himself remains shrouded in mystery the entire film. Virtually nothing is revealed about who he is, his motives for killing, or how he chooses his victims. I asked Ryan about this, and he explained:

“One of my favorite films is THE BIRDS. I love how there is no real explanation for why the Birds acted like that. You almost forget about them along the way, as the script mainly focuses on Tippi Hedren’s character. The film also starts out like a 1960’s Romantic Comedy, which is fantastic. I aimed to do something similar with this and keep the attention on how the ladies are coping with all the madness.” 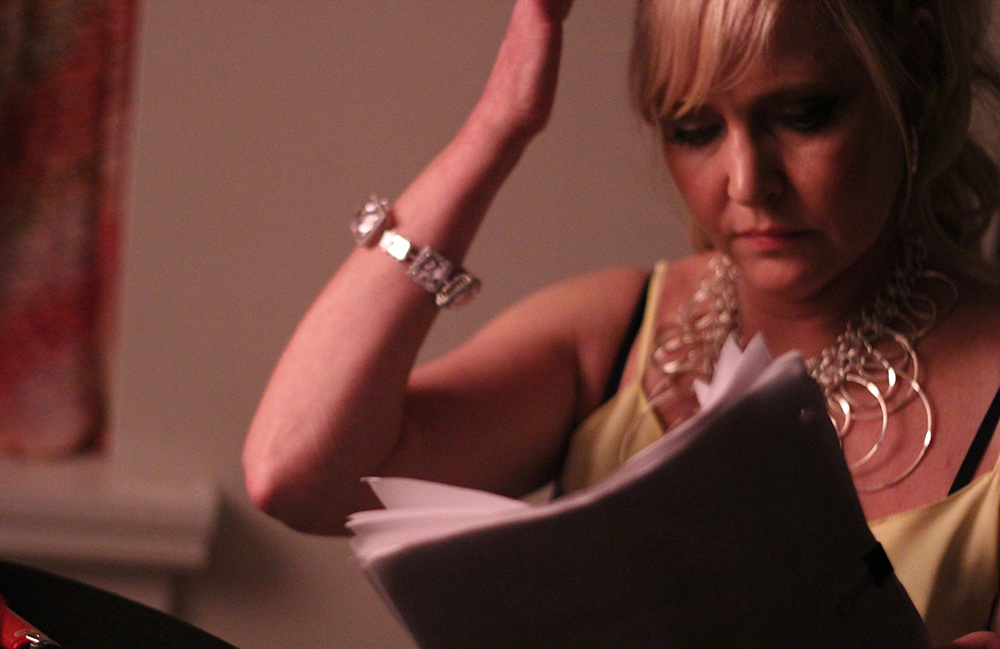 Behind the Scenes with Lisa Wilcox

His response highlighted another element that really stood out for me while watching this short — how female centric it was, both with the two strong female leads and the supporting cast. I asked Ryan about this decision to predominantly showcase female talent and how important he thinks it is to highlight more talented women in the genre.

“Very Important! I love writing for women, and I strive to get better at it. As a gay man, I love watching a woman carry a story,” explains Burton. “My favorite film is ALL ABOUT EVE, so that should tell you something! In terms of the Genre (especially in mainstream cinema), for every step forward there are five steps back.”

Ultimately, there’s a lot of substance to The Watcher of Park Avenue and some really interesting ideas. 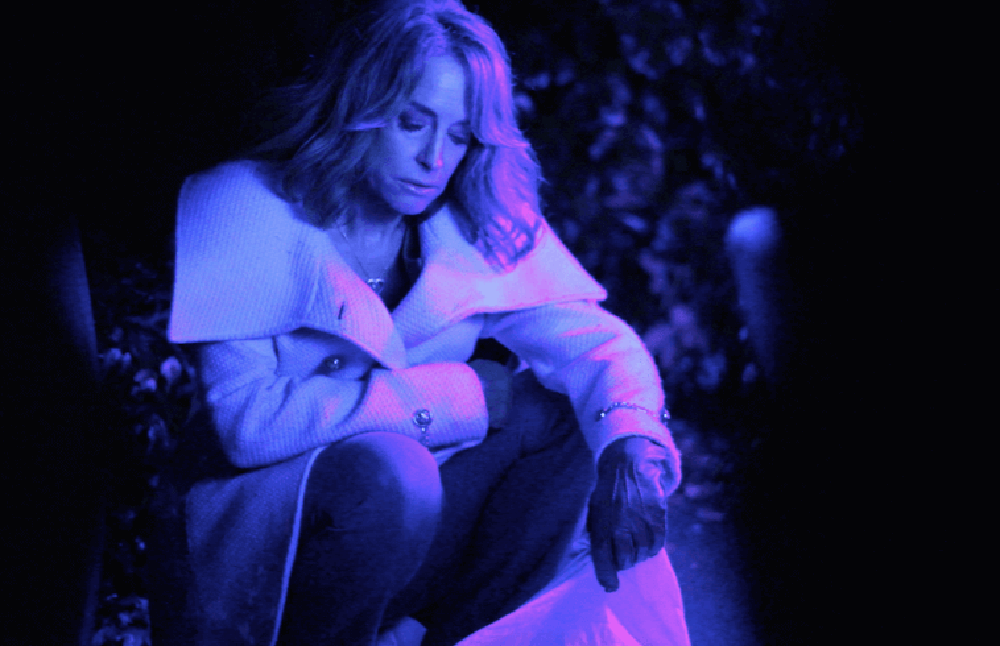 While some performances fall flat, the short is aided considerably by the standout leads. Technically, there are flaws, especially with regards to editing and lighting. And some of the scenes don’t quite work. But much of that can be forgiven for a first time filmmaker.

What’s impressive, however, is how much Burton was able to accomplish for a 25-minute short that was shot in just five days. Burton admits to only getting about six hours of sleep during the entire shoot, with one day consisting of 14 hours on the set.

I really loved Burton’s unique vision and his commitment to highlighting women and diversity in the genre. In fact, he confided in me that his goal for his next project is to hire an all-female/LGBT crew. That alone makes Burton definitely one to watch in the genre, and I’m very excited to see what he does next.