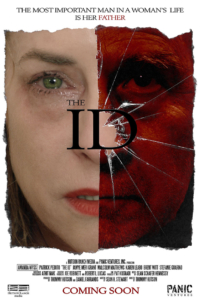 The Id tells the story of Meredith (Amanda Wyss), a lonely woman caring for her domineering father (Patrick Peduto), who is pushed to the brink when a figure from her past re-enters her life.

THE ID is an impressive psychological horror drama that is propelled by the performances of Patrick Peduto and Amanda Wyss.

The film is a study in the descent of the mind into a repressed madness that can no longer be ignored. THE ID is not an easy film to watch. It features many moments that are uncomfortable and explores themes that are difficult to see. A fractured father/daughter relationship with severe verbal abuse and simmering hatred about to come to a boil is shown without holding back, and I give kudos to the filmmakers and the cast for their willingness to be so open with a distressing subject.

Very touching and thoughtful music matches the touching and thoughtful performance from Amanda Wyss. She radiates pure and constrained emotion in this film that doesn’t just let the viewer know of her pain but let’s them feel it as well. This film belongs to Wyss, and the journey of her character Meredith becomes the journey of the viewer along with her, even as she begins to crumble to the situation and lose touch with reality. Her performance combined with the observant and lingering direction of Thommy Hutson made The Id and engrossing and powerful film.

Meredith is set apart almost immediately when a delivery girl named Tricia (Jamye Grant) comes to the door in the beginning of the movie, and the stark contrast is immediately apparent. Tricia is very animated and happy, has her hair done with make up on and stylish clothes with accessories, while Meredith is standing still in the doorway simply dressed and isn’t allowed to wear makeup in the house. Another scene shows Meredith watching her favorite show on TV, and we see how desperate she is to avoid her life while the show is on. Her hyperbolic response to the sitcom makes it clear this show is one of the few things she has to look forward to.

The only flaw the film has is the script runs a bit thin in parts towards the last third of it’s run time, as there is a change in Meredith that causes events to escalate. After the appearance of an old high school love, I felt the actions the character takes weren’t completely earned and seemed rushed in execution. It didn’t quite convey the tension that I was expecting to feel. There is certainly a steady growth of madness taking place, but to get from Meredith in the beginning to Meredith at the end, I felt a noticeable disconnect of that journey somewhere in the middle. The saving grace is Wyss’ performance and the unpredictability of Meredith — watching to see just how far her mind has slipped as she becomes more and more detached and semi hallucinatory.

THE ID goes for broke in showing abuse, repression, regrets, and madness up close. And, for the most part, the film succeeds. It’s a difficult and bleak yet fascinating watch with strong performances from the entire cast. The film reminded me of SUN CHOKE starring Barbara Crampton that came out earlier this year. The two are similar in tone.

If there was any justice in the world of movies, Amanda Wyss would be in discussion for an Academy Award for this. And that is reality.