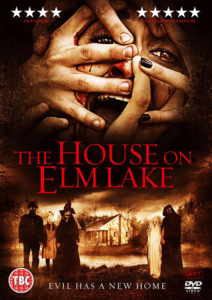 A man convinced that Lucifer was within him brutally murdered his wife and child in Satanic sacrifice. Years later, Eric (Andrew Hollingworth), Hayley (Becca Hirani) and their daughter Penny (Faye Goodwin), move into the same house which was left unsold on the market. They think they got a good deal. But they don’t know that the House on Elm Lake has, for centuries, been home to the servants of Lucifer — holding a treacherous evil waiting to be unleashed.

The opening scene of The House on Elm Lake prepares you for what to expect from the rest of the film, as Elliot (Tony Manders) brutally murders his wife (Kate Lush) and son (Oliver Ebsworth) as part of a ritual sacrifice.

It’s a bleak start to the film, setting a tone which is maintained throughout.

The film utilizes the isolated location to deliver some effective jump scares — building up tension and giving us a glimpse of the home’s horrendous history, where various ghostly apparitions are now trapped. But effective as the jump scares are, it’s the surreal scenes featuring dark visions where the film is most effective.

A powerful Satanic entity controlling the house looks to engulf Eric as its new host, terrorizing anyone attempting to interfere in the process. Director James Klass (12 Deaths of Christmas) creates a surreal parallel world, which Eric is gradually drawn into, as the entity looks to take control. Through a series of dreamlike visions, Eric is gradually broken down and possessed through psychological delusions, and a combination of sexual desire and bloody horror.

Andrew Hollingworth does a great job with Eric, whose dramatic change in character gradually emerges throughout the film as the entity takes control.

Changing from the loving family man at the start, to the violent recluse he becomes — with a creepy leer and a menacing swagger. One scene where a psychic has been invited to the house by Hayley works well in portraying Eric’s domineering presence, as he traps the psychic in the bathroom alongside a screaming apparition covered in blood. It’s an unexpected scene and leaves you wondering what happened once the door closes and the lights go out.

Becca Hirani delivers an emotional performance as Hayley, who has the difficult task of trying to hold her family together with the plight of being trapped and unable to leave. You can really feel for her character, who undergoes a harrowing experience throughout the film.

‘The House of Elm Lake’ leaves you drained after watching, because it is a dark uncompromising film. Mixing raw horror and a surreal reality, it forces you to endure the events rather than enjoy them. Visually creative and relentless in its execution, it has an original feel of true horror, which fans have been waiting for.