Talking “Rites of Vengeance”, religion, women in horror, love of the genre, life in L.A., and an impressive career with talented writer/director Izzy Lee 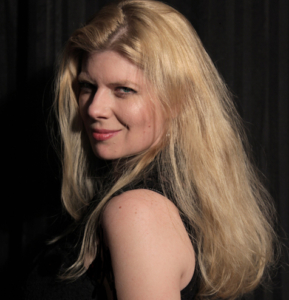 Boston-based writer, producer, director and author, Izzy Lee (Innsmouth), has done 13 short horror films since 2013. Her last film, “Rites of Vengeance” is in the film festival circuit and has been selected to some of the most prestigious genre film festivals in the world, where it has been nominated for and won numerous awards (see a full list here.)

Now that Izzy has moved to Los Angeles, I can only imagine that her star will continue to rise, and we should all expect even bigger things from her. Here’s what she had to say: 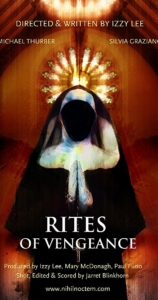 First, congratulations on all the Official Selections and all the awards that you’ve been receiving for “Rites of Vengeance.” Could you tell us briefly what the film is about?

It’s about a trinity of Sisters — Catholic nuns — who find that there’s a very bad priest within their midst and they decide to take matters into their own hands, vigilante style.

From the very first film of yours I saw, “Legitimate,” I realized that all your films don’t just tell a story, they also send a message, usually about a social or political hot topic in the news. What issue does “Rites of Vengeance” address and why is it important to you?

I usually take on a socio-political theme in my work because I find the world to be very upsetting. Sometimes I’ll do a horror-comedy to get a bit of a breather, but even in those films I’m saying something about gender politics or some injustice that deeply bothers me. I use my anger as fuel for work; I’m fortunate to have found an outlet.

Religion presses my buttons, particularly when it’s used to oppress or hurt people — especially children. I was raised Catholic myself, and when I was eight, I told my mom that I didn’t want to continue parochial school, CCD, or going to church. I’d read the bible, and just couldn’t believe all the nonsense, incest, and murder within it. I told my mom it was the trashiest novel ever written and that I wouldn’t follow any bullshit rules. Surprisingly, she let me go my own way, but that’s probably because I was quite headstrong. I haven’t changed much.

Rites of Vengeance was a difficult script for me to write. More so, I know several people — including close friends — who were systematically abused by priests as children. This film is for them.

You’ve done an impressive twelve short films since 2013. What are you working on next?

Thanks! My first, a bumper called “Babe-Be-Gone” (played in front of “American Mary” at Fantastic Fest 2012) isn’t on IMDB, so it’s thirteen shorts since 2012. Funny enough, I’m currently in pre-production for the Soskas’ annual Blood Drive PSA. Because I happen to be a maniac, my entry has turned into a full-blown short film. So, part of the short will be a PSA, and the full short will tour festivals in 2018. I have some pretty cool people aboard, but I feel like if I name them, they’ll get booked on something else. I don’t want to jinx myself.

I also write fiction now, mainly short stories. There are a few out for submission right now that I hope find a home, but I have a few currently in print, including: “Tilberian Holiday” (“Wicked Witches”); “The Lake Children” (“Now I Lay Me Down To Sleep: A Charity Anthology Benefitting The Jimmy Fund” and “Hydrophobia: A Charity Anthology For Victims Of Hurricane Harvey”); and hopefully sooner than later, the upcoming “I Did It The For The Art” (“Would But Time Await: an Anthology of New England Folk Horror”).

Now that you’re living in L.A., any chance that you’ll jump into making feature films?

That’s what I’m here to attempt to do. My husband and I have flipped the table of our lives violently now that we’re in L.A. We didn’t want to live with “what if” anymore. I love Boston, but the talent and crew pool is quite small there. In fact, my usual team and I had what I call a “Team Weirdo” summit in January 2016, and we all decided to make the jump. Filmmakers Mike Epstein and Sophia Cacciola, and Bryan McKay (my DP on a number of shorts) all arrived here last year. We almost came here in 2016 as well, but decided to try to save a little more money first.

As for features, I have a few scripts I’m trying to get made, and I’m writing more all the time. If anyone wants to fund one, drop me a line.

Why horror? Is this a genre that always interested you?

Yes. I’ve always been drawn to the dark side of things in all media. I find that horror is honest. Fans are loyal, addictive supporters, and they love you for your work. Well, maybe not all of them, but you know what I mean.

Horror peeps are the best peeps.

You can also get away with a lot within genre films, especially if you have a message. In horror, women’s roles are usually strongest in in terms of time onscreen, the amount of speaking they do, and the caliber of their stories are far higher than any other genre.

There’s been a lot of talk recently about creating opportunities for women directors. Do you think all the talk will actually result in any changes?

I fucking hope so. Everything is ridiculous. There’s certainly a spotlight on us, and that can’t hurt, but I’ve also noticed an influx of male directors who talk about how much they love “strong female characters.” Dudes… just write good parts for women. By declaring how much you love “strong female characters,” you imply that’s the exception and not the rule. Write better roles for both genders. Write better stories that don’t subjugate women. There’s no excuse.

Are there any solutions that you can think of to the gender inequality in the film industry?

Hire women and trust what they say. Hire good people from all walks of life period, who want to do good and have open minds and want to elevate film so that it isn’t such a cesspool. Don’t tolerate mediocre dudes who add nothing, complain, and sabotage or drag down your production.

Anything else you want to tell us about?

You can catch the other short film I have currently on the circuit “For A Good Time, Call…” about a douche bro who uploads a sex tape taken in secret to the Internet — with supernatural comeuppance in the form of Tristan Risk and her tricks.

Some previous shorts can be found streaming: “Postpartum” is on “Short Ends” hosted by Ryan Lambert and Andre Gower (“The Monster Squad”) via Project Alpha/The Nerdist, and “Innsmouth” is on Shudder.

Thank you for talking to me, and best of luck to you with your films!