Culkin and Shaye shine in this startling, deeply personal film about guilt and grief 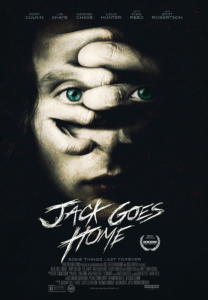 Jack Goes Home is a genre bending, horror/thriller written and directed by actor Thomas Dekker (A Nightmare on Elm Street, 2010). He wrote the film in just three weeks, only 10 months prior to debuting it at the 2016 South by Southwest (SXSW) Film Festival. It was inspired by Dekker’s depression following his father’s death in 2010. The result is a dark and deeply personal film about pain, loss, and inner demons.

Jack Goes Home is about an educated and well-versed magazine editor living in Los Angeles named Jack (Rory Culkin). As he prepares to welcome his first baby into the world, his father is unexpectedly killed in a violent and horrific car crash. He returns to his hometown of Denver, Colorado to care for his injured and grieving mother (Lin Shaye). During his stay at home, he uncovers long buried secrets and lies within his family history that threaten to unravel everything he thought he knew about himself and everyone he knows and loves.

Let me say this upfront. This is a polarizing movie that deals with some pretty heavy issues, aggressively tackling the darker side of human nature and experience. It’s a dialogue heavy film, often highly melodramatic and esoteric. It’s got a definite ‘arthouse’ vibe that will either make you love or hate the film depending on your sensibilities, your tolerance for bleak character-driven drama, and how much the raw emotion resonates with you on a personal level.

For some, this is going to feel overly pretentious and confusing. For me, this film felt like poetry — albeit the dark and soul-crushing kind that speaks to the dark recesses of your mind, with macabre musings about loss, betrayal, guilt, and despair. There’s an overwhelming sense of melancholy throughout, fueled by nightmarish visuals and a haunting soundtrack. Dekker does an exceptional job creating mood, tension and chaos as Jack’s world comes crashing down and sends him spiraling.

Regardless of how you feel about the film’s tone and style, one thing that’s hard to ignore is the sheer brilliance of the performances. Rory Culkin is near flawless as Jack, the damaged but endearing protagonist. Appearing in nearly every scene, he effortlessly carries the film and gives Jack an emotional depth and sincerity that is both captivating and deeply unsettling as he begins a descent into madness and paranoia.

Veteran genre actress Lin Shaye is extraordinary as the unpredictable, explosive, emotionally unstable matriarch of the family. I wanted to stand up and cheer every time she was on screen. She’s given a lot to work with here — a substantial, well-written role that offers plenty of juicy dialogue — and she makes the absolute most of it in one of the most unique and compelling performances of her career.

The film is also helped by a strong (if underutilized) supporting cast, which includes Natasha Lyonne, Britt Robertson as Jack’s pregnant fiancée Cleo, and Daveigh Chase (who played Samara in The Ring) as Jack’s extremely loyal and supportive best friend Shanda.

As brilliant as I felt the build up to Jack’s madness was, the ending left me unsatisfied. There’s a pivotal third act reveal that is well conceived, but it feels rushed and not fully formed. It left too much unanswered and didn’t provide enough of a payoff for the amount of emotional investment I had in these characters. It wasn’t enough to temper my overall enthusiasm for the film, but I do think there was a great deal of untapped potential that wasn’t quite realized.

Some movies I recommend with gleeful abandon, and others with more caution and caveats. This falls into the latter camp. This certainly won’t be for everyone. But, even if you don’t fall in love with this movie, it’s difficult not to at least admire and appreciate the effort on display. Dekker shows enormous promise as an up-and-coming genre filmmaker with a unique vision and a strong eye for visuals.

Although uneven, Jack Goes Home delivers on many levels. The performances are mesmerizing, the visuals are striking, and Dekker gives horror fans some truly effective scares throughout. Ultimately, I found this to be a bold, unique, and highly personal film that should not be ignored — even if just to revel in the incredible genre talent both in front of and behind the camera.

Jack Goes Home will be released in theaters and VOD on October 14th.