Filmmaker and Indie Horror hero Joe Lynch talks with us about his new film Mayhem, the evils of Corporate America, and why Indie Film matters.

I am in love with Mayhem! Joe Lynch directs the relentless, dark, incredibly funny satire about Corporate America, and it has been taking the film festivals by storm. Now, it’s finally on the way for us all to see. On November 10th, the film will be released in theaters, on VOD and Digital HD.

This week, talented director Joe Lynch found some time in his busy schedule to talk to me about the fun that is MAYHEM. This film has a lot more to say than what you might think. It’s not just a horror flick — it’s much, much more. But let’s let Joe tell you, in this candid conversation, what MAYHEM is all about, his feelings on Corporate America, and why we should continue to support Indie Films! 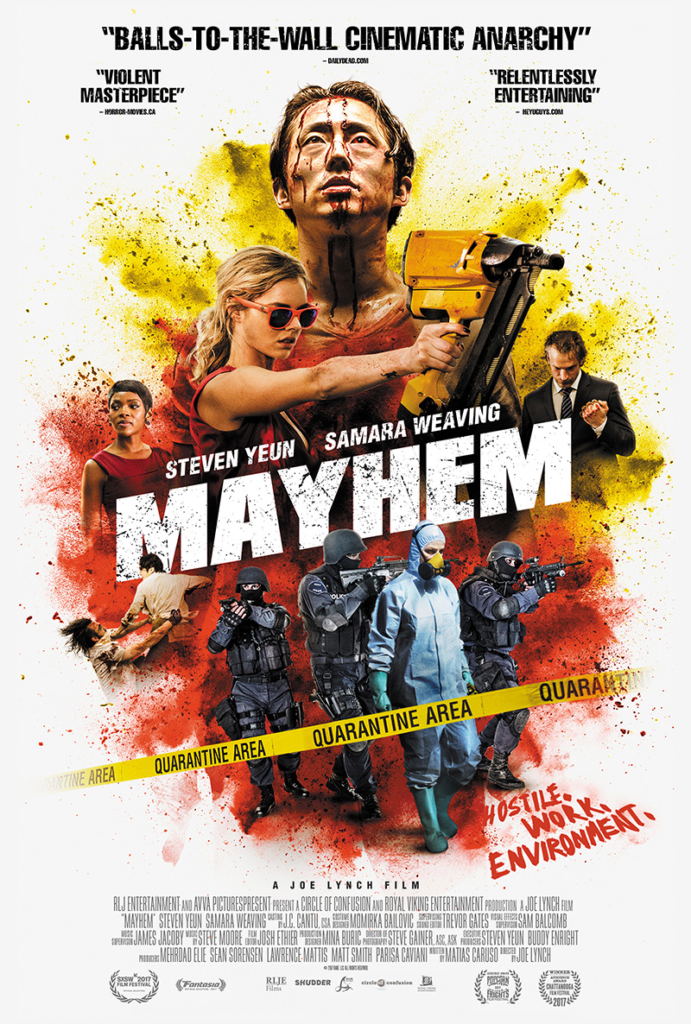 Los Angeles Zombie Girl: OMG Joe, I am so excited to talk to you. This is one of my favorite comedies of the year!! Corporate America is a world I have never wanted to be in and I don’t understand it. I love this funny spin on how to literally claw your way to the top of the corporate ladder!

Joe Lynch: “Thank you so much, that’s awesome. I’m so glad you didn’t hate it! Yes, working for a big corporation is not for everybody, that’s for sure.” 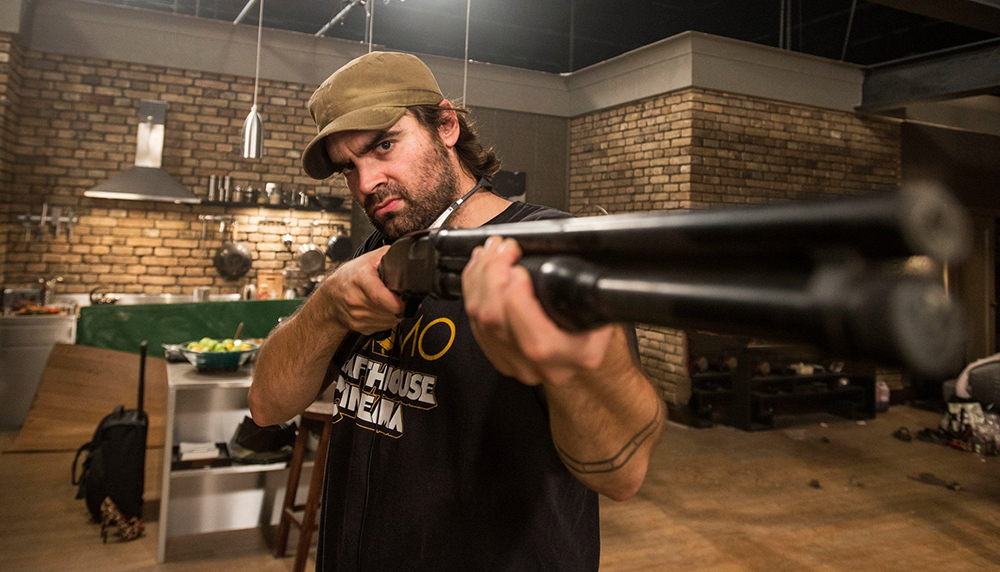 LAZG: You wear a lot of hats in the movie business. How did you get started?

JL: “A jack of all trades, and a master of none! Ha, ha. Honestly, I started because of my love for cinema. I was a child of the late 70s/early 80s, and film was just going from a legitimate art form to more of a commercial art form. I was the by-product of watching all that evolution and just fell in love with the process. I was so curious about everything. How did they make that big hairy guy, and the droids? I kept thinking they were actually on the other side of the screen when I was little. I remember one day, I went down to the front of the screen and tried to look around and see where those guys were at. I was so transfixed by the magic of movies that I wanted to harness that myself.”

“At first, I wanted to be a makeup effects artist, or an actor. I especially I wanted to be Tom Savini, the makeup guru; kicking ass, taking names, killing zombies and looking good while doing it. That’s the kind of shit I wanted to do. And then slowly but surely, I began to realize what all the jobs were. There’s the director, and he or she’s the one that gets to work with all the other departments, and have a vision in all those facets, making something collaborative From then on, I just wanted to just live in that world, and do anything and everything, because that I knew that it was only going to help me do things later.” 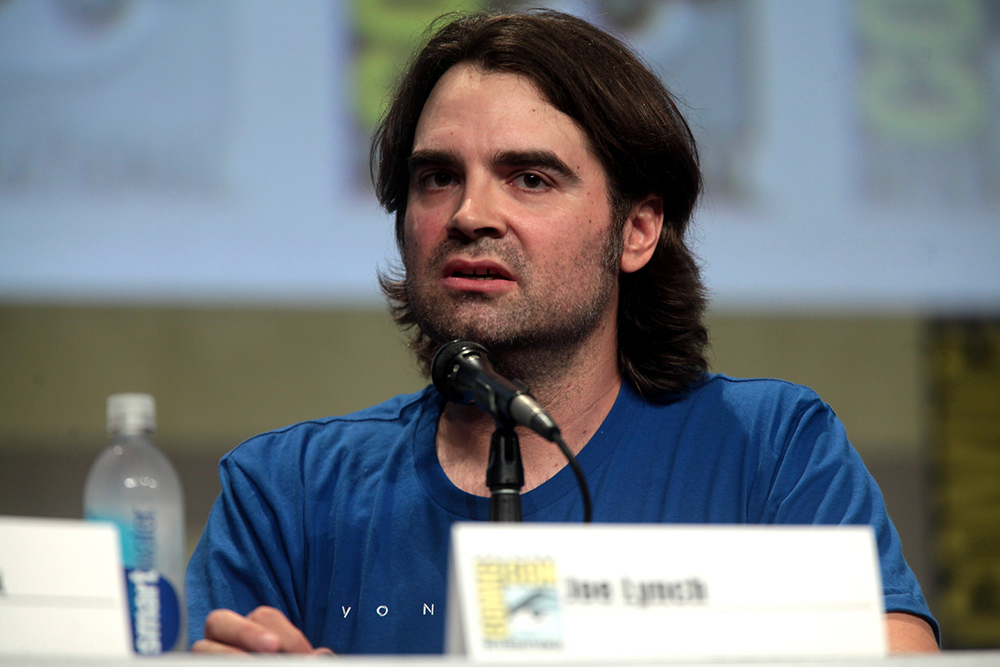 “So, I learned how to shoot, I learned how to edit, I learned how to write, kinda. I did enough so I would be able to tell anybody what I wanted specifically. And by learning that discipline, it taught me how passionate I was for film, that I still consider it an art form. Then luckily opportunity came knocking in every form, whether it was short films, music videos, a commercial, a TV show, theater, I jumped on it. All within the same goal: I wanted to do features.”

“I feel like I paid my dues. All those previous projects, all led me to have the kind of experience, so that on my first day on my first film I wasn’t totally freaking out. OK, I was freaking out, but I didn’t let anyone see it. It allowed me the kind of confidence I needed, because time is money. You don’t have the ability to sit there and go ‘hmmmm what should I do today?’”

“No, you have a gun to your head, practically. And you’re being told, you gotta do this and it’s gotta be done now, and if we go over you lose this actor. Then it starts to rain, and all these factors can really screw things up and make you look like a loser because you haven’t been able to “make your day,” and it’s not very financially responsible. So, everything was a stepping stone to my first feature, and even that, was a stepping stone, to every other feature I’ve done. And then here we are.” 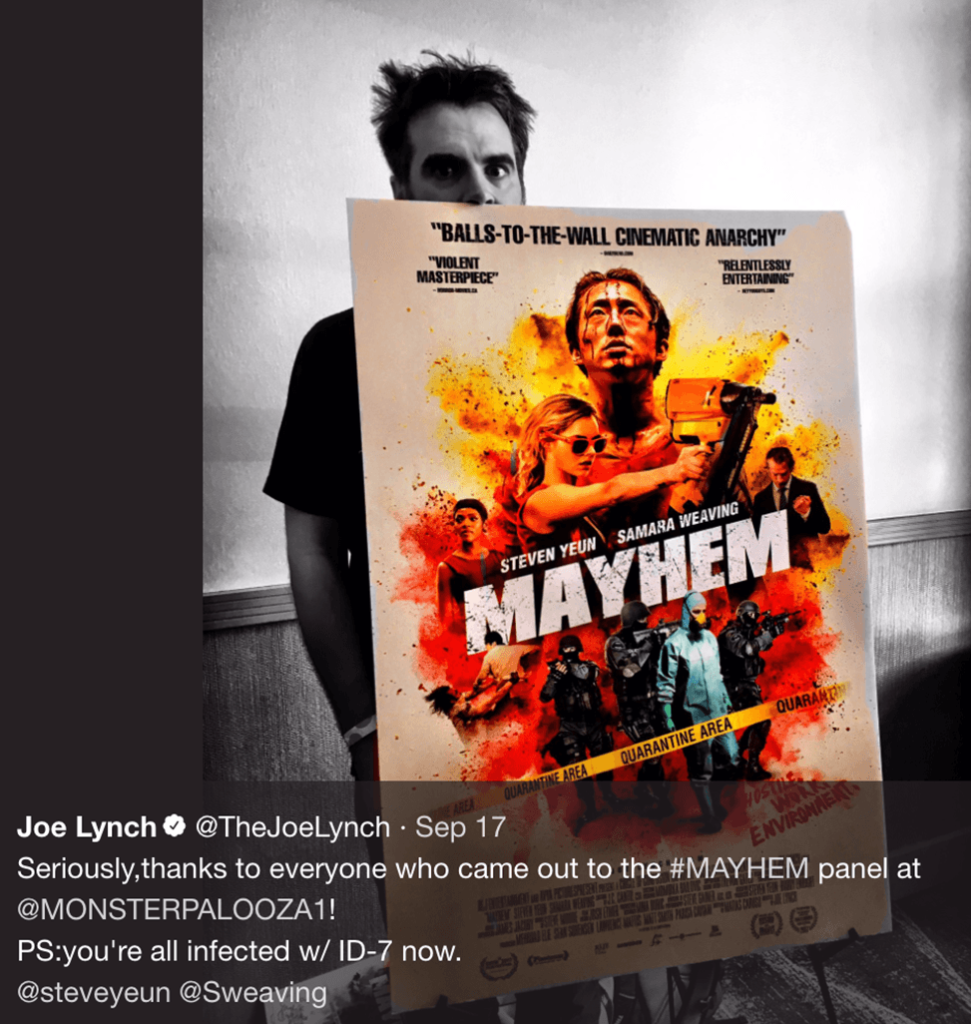 LAZG: Where did the idea for Mayhem come from, and how do you describe what the movie really is?

JL: “When I describe the movie I say: ‘It’s 87 minutes, with credits. It’s an action thriller, comedy, sci-fi, horror, musical satire!’ And I can definitely say with full confidence, I am completely right…and also completely wrong. It’s kinda what you bring to it. It’s a genre bouillabaisse, a genre mash-up, in a way. The basic story is about a dangerous virus, that makes people lose their inhibitions. So, what happens if that temporary virus gets let loose in a law firm? Now the immediate response most people have is, ‘Oh my god, I want to see lawyers beat the shit out of each other, yes, I will see that movie!'”

“But there is a little more to it than that. What we do is then go macro and we start looking at the life of, and career of, this one employee at that office, who was part of a court proceeding that allowed someone to get off on murder charges because they were infected with the virus. So, with that all in mind, this poor schmuck gets fired from his job. It wasn’t his fault, he just ended up being at the wrong place at the wrong time. He gets fired, but he’s at a point that he’s not even happy with the job. He wonders, ‘Why am I fighting for this job that I don’t really like? Oh wait, society tells me I have to be successful.’ But then what happens if he gets infected too?”

“Now you have this building full of really repressed, really irate lawyers and legal people, and they are tearing each other apart: whether it’s fighting, fucking, killing or wearing post-its all over their body. It’s like the sci-fi trope about having this virus opened the world up to me to be able to be satirical, but in a way that didn’t feel like I was hammering something down peoples throats. I can have a little fun with it, using what all good sci-fi does with a dangerous virus, to let us reflect on our own society.”

“That’s good sci-fi to me. But at the same time, do you call Mayhem a sci-fi movie? Not really. I don’t necessarily call it a horror film either, I think the movie’s a comedy. But maybe that just my own sick and twisted disposition. It’s got a little something for everybody