Women in Horror: The Homicidal Homemaker

Kaci Hansen turned her love of cooking and horror into a recipe for success, building a beloved brand — and an empire — as The Homicidal Homemaker.

For those of you who are not familiar with The Homicidal Homemaker (Kaci Hansen), you’ve come to the right place. She’s talented, crafty, and a damn fine cook. She’s currently featured in Rue Morgue Magazine and has her own cooking show. In celebration of Women in Horror Month, I spoke with Kaci about how she got her start, her love of cooking, what Women in Horror Month means to her, and of course, horror movies. 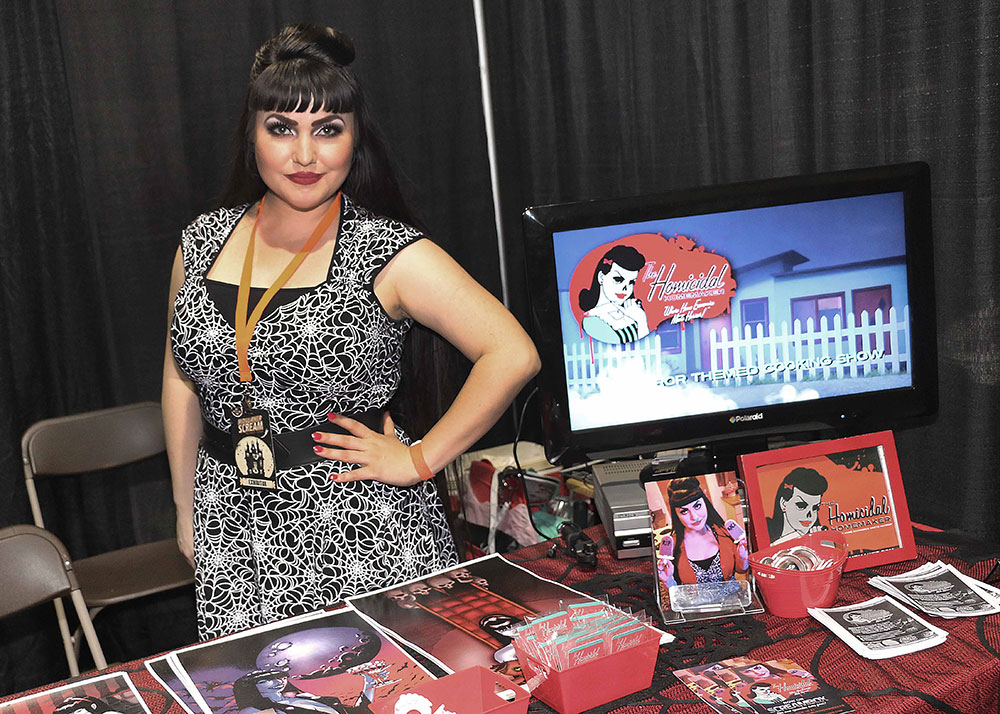 1. Can you tell us a little bit about The Homicidal Homemaker and how you came to be her?

As cheesy as it may sound, I feel like the persona of The Homicidal Homemaker is someone I’ve always been, even if I didn’t necessarily realize it. I had a brief profession as an art teacher, so I believe teaching or instructing in some form is just in my nature, even though I’m rather shy and introverted.

Growing up, I spent a lot of time at my great-grandparents’ house (around tons of mid-century décor), watching shows like The Munsters and The Addams Family, but also spending quite a bit of time watching PBS shows like The Joy of Painting with Bob Ross and Yan Can Cook with Martin Yan. My favorite TV show was PeeWee’s Playhouse, and my earliest memories of having a favorite movie is a tie between Beetlejuice and Little Shop of Horrors (1986). I was always fascinated by vintage typography and advertising, and loved going to antique stores with my family. I believe all of those early influences are now reflected in what I do, in some form.

When I was in college as a Fine Arts Major, I began decorating cakes and cookies as a hobby, and naturally, my affinity for all things spooky crept over into my kitchen. I started posting photos of my creations on Myspace, and around 2007, I officially launched The Homicidal Homemaker as a standalone profile. I didn’t think many would have an interest in horror inspired recipes and food creations, but it immediately took off. Folks started asking for recipes and tutorials, and in 2010 (during Women in Horror Month), that’s how the official website came to be. Within the first year of launching my horror food blog, my recipes were featured on sites like The Huffington Post’s TASTE and FearNet, which was pretty unbelievable to me!

Video was something that I always wanted to bring to my website, but things just never worked out, and all of the production companies didn’t respect the vision I had for it. In 2015, I began working with Neptune Cinema on bringing the horror cooking show to life, and in February 2016 (during Women in Horror Month) I premiered the first episode. 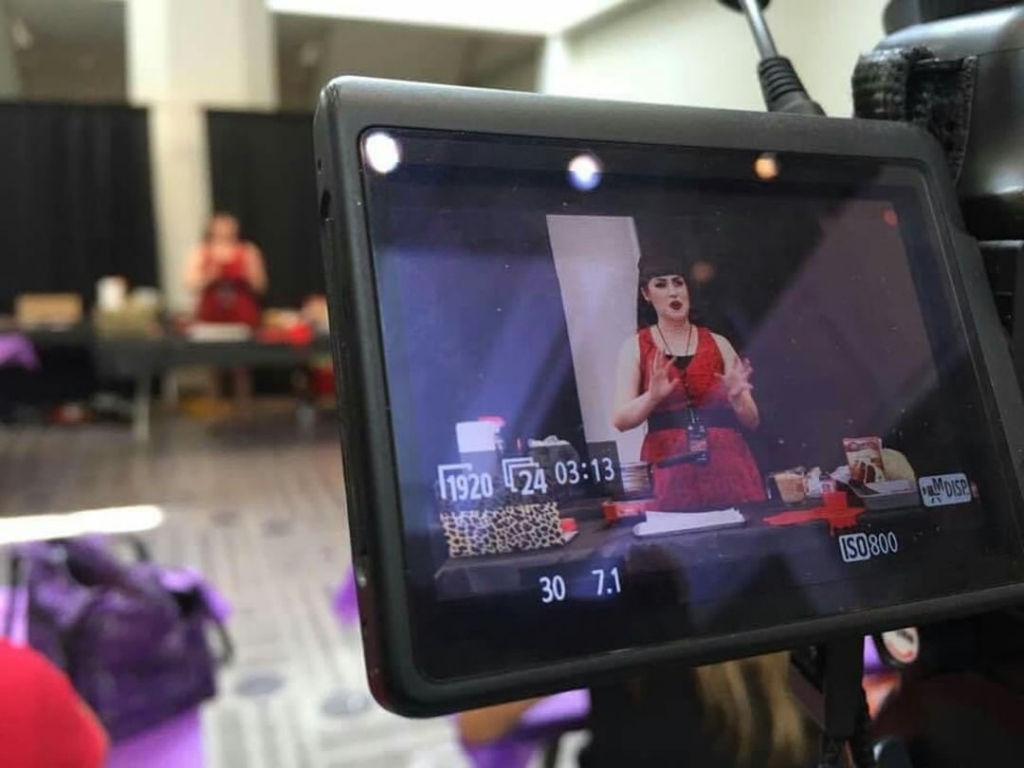 2. What’s your favorite dish to make?

That’s a tough one, but my recipe for my Twin Peaks Black Lodge Pie is pretty dangerous. I’ve had so many people tell me that they both love and hate me because of that recipe, and I get it – it’s super decadent, but it’s hard to stop at just one slice! This past October, I took mini versions of the pie to Sinister Creature Con in Sacramento, CA, and gave one to Sheryl Lee (Laura Palmer) and Ray Wise (Leland Palmer). Sheryl told me that next to her grandmother’s pies, that it was the best pie she ever had. They were so genuinely kind and appreciative, and enjoyed the pies so much, that I actually got quite emotional while talking to them. I never thought that I’d get to share one of my recipes with two of my favorite actors, who were responsible for inspiring me to create the recipe. It was surreal…almost like being within the strange, wonderful world of Twin Peaks. I’ll cherish that memory for the rest of my life! 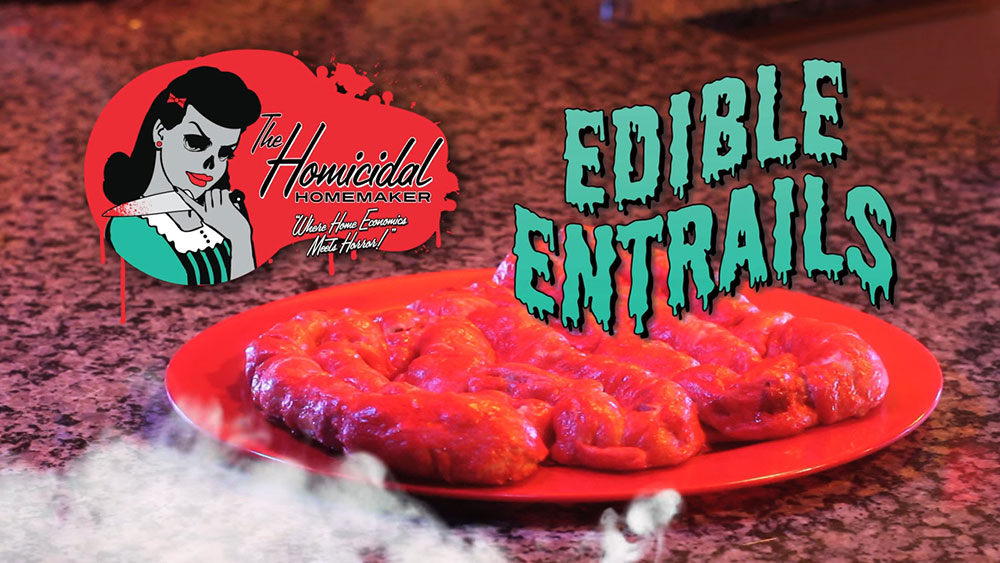 3. How does it feel to have a column of your recipes featured in Rue Morgue every month?

It’s an incredible honor. Rue Morgue has always been incredibly supportive of indie horror creators, and I would get so excited when I would see them share one of my recipes over on their Facebook page. So one can only imagine how over-the-moon I was when Rue Morgue did a feature on me in issue #171. My column was added one year later, and I still find it hard to believe! I’ve read Rue Morgue for years, and I never, ever thought that something I created would be immortalized within the pages of their amazing publication, or that I’d have the opportunities that they have given me, including my own segment on Rue Morgue TV. I’m forever grateful to Andrea, Rodrigo, and the rest of the team for believing in what I do, and being great friends as well.

4. What does having a Women in Horror Month mean to you?

I think it’s fantastic. It brings focus to women that are involved in all facets of the horror genre, and brings awareness to those of us who are finding our own niche to express ourselves through the genre. It has been amazing to watch and follow how the celebration grows with each year. To see women supporting one another and building each other up is incredible. 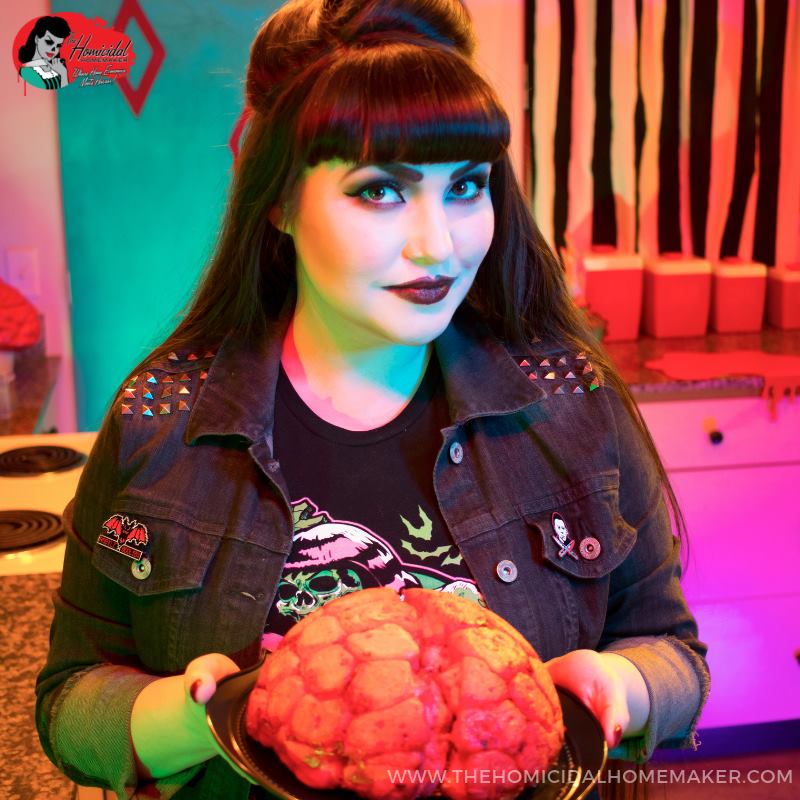 5. You’ve done everything from cooking shows, to magazines, to late night talk show host, among many other things. What’s next for the Homicidal Homemaker?

Currently, I’m working on new content for my horror cooking show, which will now also be available on Amazon Prime, along with YouTube, Screambox, and CMAC (AT&T Uverse/Comcast in Central CA), as well as producing my own line of horror-themed baking items and clothing. I’ve also been hard at work on my cookbook, which has been in the making for several years. But I’ve taken on so many projects, it’s gotten pushed back several times, but I’m ready to resurrect the project and get it into production! Also, I now also have my own segment on Rue Morgue TV – so you can actually watch me prepare the exclusive horror recipes that are featured in each issue of Rue Morgue Magazine.

And because I apparently don’t have enough things on my plate (ha!) I’m also currently working on my biannual publication/newsletter, Ghoul Housekeeping, as well as distributing some of my baked goods at various horror conventions and retailers. 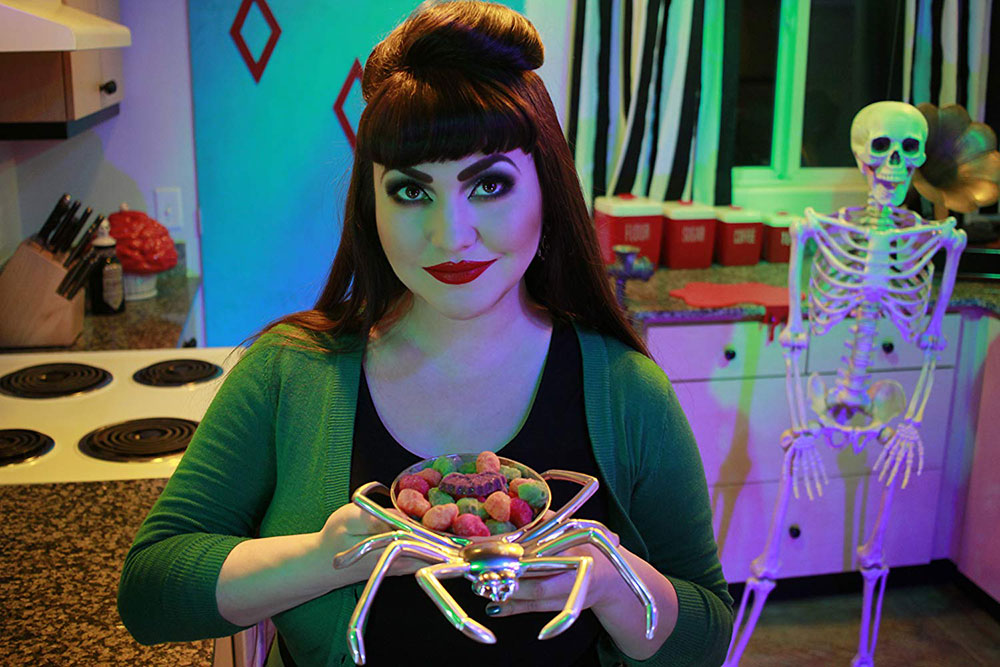 6. Who are some of the women in the industry that you admire?

Joan Crawford and Bette Davis. I wish I could get a time machine, and go back in time and have dinner and cocktails with those two. Can you imagine!?

Whatever Happened to Baby Jane? is one of the first films I remember legitimately disturbing me as a child, and as I got older and learned more about the real-life feud between the two actresses, I found myself even more fascinated with them. I’ve even made some of Joan’s recipes! They were both phenomenal actresses who played the role of a homicidal homemaker all too well (if you haven’t seen Dead Ringer or Strait-Jacket, please, do yourself a favor and check those out).

Also, I’d like to give a shout-out to all of the ladies who are working hard to contribute to the horror genre, whether that’s by running their own websites, publications, or creating things for everyone to enjoy through their art, writing, films, and photography. Seeing other driven, hard-working women involved in the horror genre and community constantly inspires me to keep going. 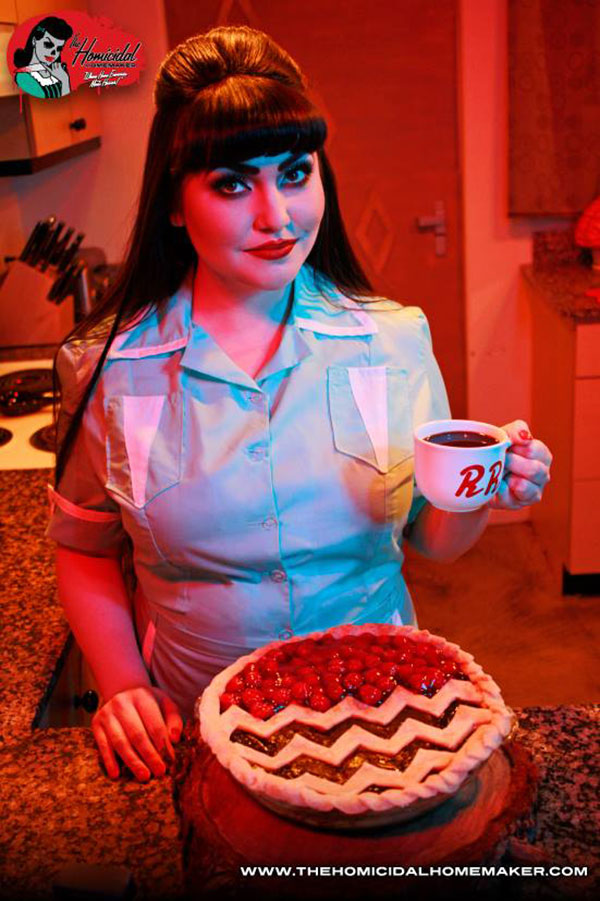 7. You are super passionate about horror. What sparked your love of the genre?

I always enjoyed things with a darker aesthetic. During Halloween, I always had really awesome homemade costumes, and was always involved in some form of creative outlet, whether that was dancing, music, or art. Everyone called me “Wednesday” when I was a kid, because my mom often dressed me in black dresses and I loved having my long hair styled in two braids. Sure, they were likely teasing me, but I was flattered by it.

But in all honesty – while I loved monsters, ghouls, and all other creatures of the night, most horror films scared the heck out of me as a kid! My earliest memory of seeing a horror film is watching both the 1958 & 1986 versions of The Fly back-to-back with my parents…and them sending me to bed by myself right after. I couldn’t sleep! Every time I shut my eyes, I kept hearing that little voice, “Help me! Help me!” Pet Sematary is another that really dug deep into my fears as a child. My cat, Steve, looked exactly like Church, and that didn’t sit well with me.

But that fear is what provoked interest. My mom would often ask why I was so scared of what I was seeing, when it clearly wasn’t real. That’s where the fascination began – if it looked so real, but wasn’t real, then how could I learn how to do that myself? 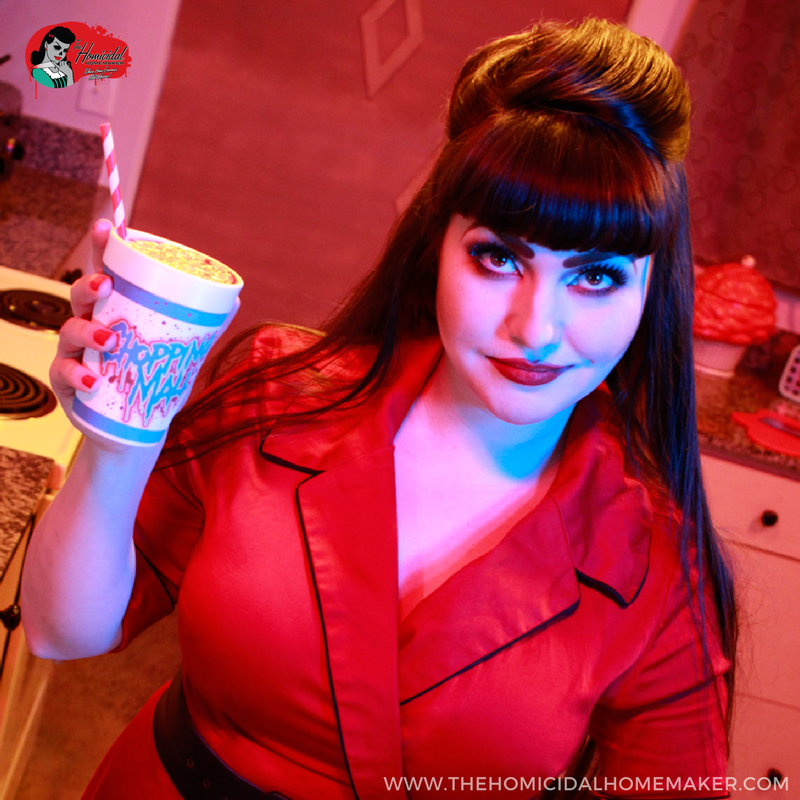 8. Where can our readers find you? 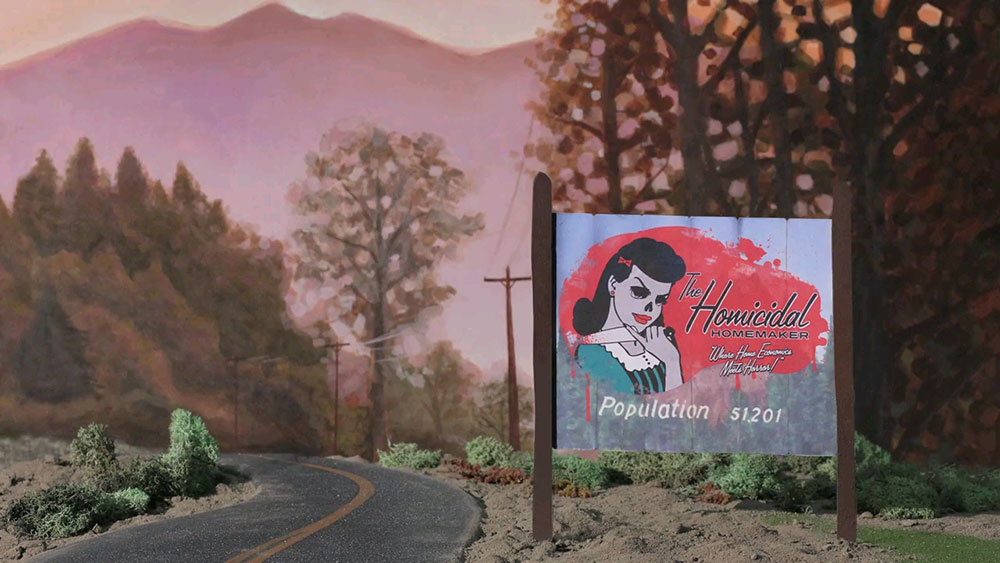 Impossible to pick just one – I’ll give you a handful.