“Kaci Hansen puts the “cleaver” in June Cleaver. Dubbed as the “Martha Stewart of the Macabre”,  Kaci Hansen has a passion for all things spooky and horror-related, and tries to find as many ways as possible to integrate her love of the genre in with everyday life. She is particularly well known for her contributions to the indie-horror community, as well as her amazing pastry creations, recipes and cocktails.

In 2008, Kaci founded the Central Valley Horror Club (the first and only horror-themed organization in Central California), who host many horror-themed events throughout Central California, including concerts and monthly free movie nights in Visalia and Fresno. Kaci was one of 13 lucky finalists in Fangoria Magazine’s nationwide search for their 2010 Spooksmodel, where she came in first place in the first fan-voting segment. In 2012, Kaci began hosting “B-Movies & Brews” in Fresno, CA, as well as hosting “Friday Night Frights”, the first and only horror-themed television show to ever come out of Central CA, making Kaci Central CA’s first-ever horror host.

Kaci has also been featured in music videos, indie horror films, danced in a horror-themed dance troupe, and was even the host of her own horror-themed comic book. In 2016, Kaci released the first episode of The Homicidal Homemaker horror-themed cooking show, which has had tremendous response, ending up being the first-ever web series available on the Screambox platform as well as AT&T Uverse and Comcast in the Central California area within just a few months of launching. Kaci not only develops the recipes herself, but also writes each episode, co-directs, co-produces, and even makes some of the props, costumes and executes Special FX used on the show. There are many great things in the works for both the show and the website in 2017, including interviews, special guests, and appearances , crafting and decor tutorials, and much more!”* 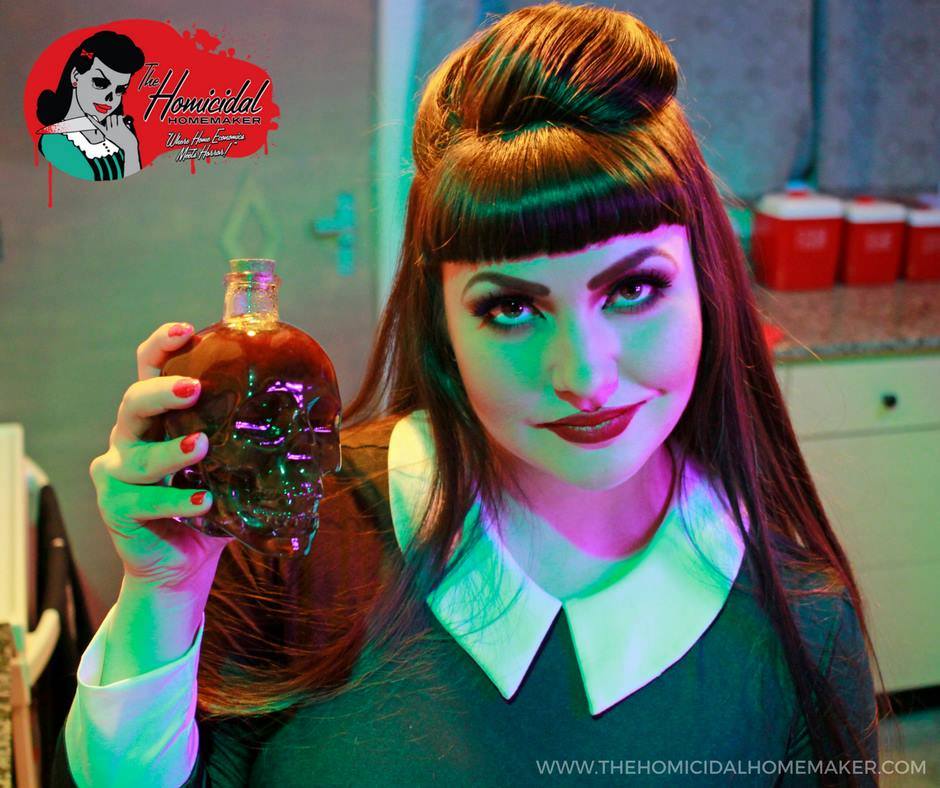 I’m actually the first and only horror hostess to come out of Central California! My involvement with the horror genre stems from simply being a diehard fan of the genre. I spent many years traveling all over California to attend horror cons and support independent horror film festivals. I loved the sense of camaraderie that I felt at these events, and was disappointed that there really wasn’t a “horror community” in Central CA. So of course, I decided to change that, and took a stab at organizing the area’s first horror-themed organization in 2008, Central Valley Horror Club. I started organizing free monthly horror screenings (which I still do every month), and the club was immediately a hit. From there, I went on to organize the first-ever zombie-themed event in all of Central CA, the Visalia Zombie Ball & Crawl, which has now become an annual event, and one of the most anticipated events in the area and inspired other like-minded events to take place around here.

Since then, I have been involved with various projects including acting in horror films, music videos, a horror-themed danced troupe, was a finalist in Fangoria’s “Spooksmodel” Contest, and even was the hostess of a horror comic book.  But my primary focus is my horror-themed cooking show, The Homicidal Homemaker®. The show is available on YouTube, Screambox, and on AT&T Uverse and Comcast in Central CA. 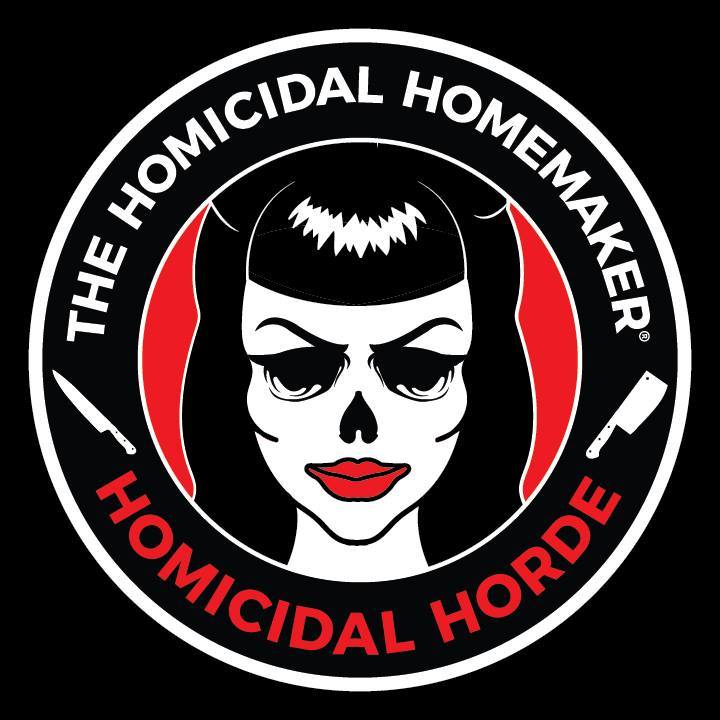 The show started out as a website a few years ago, and while I always wanted to bring the video element to it, I just didn’t have the capabilities to do so. But in 2015, I partnered with Neptune Cinema, and got the ball rolling. The show launched in February of 2016, and has been an absolute blast. Not only are the recipes 100% original creations, but each episode is unique – music is created on a per-episode basis, all of the footage is created for that particular episode, and each episode has cinematic vignettes, so it’s like we also get to create a mini-horror film within each episode. The setting of the show is inspired by my love for 1950s and 1980s horror, fashion and decor.

I have a fantastic team who goes above and beyond, and I am forever grateful for them. Everything you see or hear on the show was created specifically for the show. Yes, even the neighborhoods you see – they’re all miniature models that were crafted by hand. So if you see me walking through a cemetery, I was actually filmed on green screen and composited into footage of the miniature models. We’re a very small crew, and we all wear many hats to make the show possible. A lot of folks don’t realize that not only do I create the recipes myself and host the show, but I also write the episodes, co-produce and co-direct each episode, maintain my own website/social media, and do all of my own photography, graphic design, and marketing.

Another thing that I do is teach my horror cooking and decor classes at various conventions. Just last year, I appeared at Sinister Creature Con, Midsummer Scream, and Scare LA, and I have quite the convention schedule lined up for 2017. I think my “Killer Cocktails and Spooky Spirits” class I taught last year was one of the most talked-about classes at ScareLA – who wouldn’t love free booze with a spooky twist?

2. What person has inspired you most?

William Castle is a huge inspiration to me, not only because I am a huge fan of his films, but also the marketing and gimmicks that went along with his films. I believe that watching a film should truly be an experience, and I wish there was a way I could go back in time and experience, “House on Haunted Hill,” or, “The Tingler,” with the full-on theatrical William Castle experience. Also, Vincent Price. Not only is he one of my favorite actors, but he was a phenomenal chef, and I own several of his cookbooks. 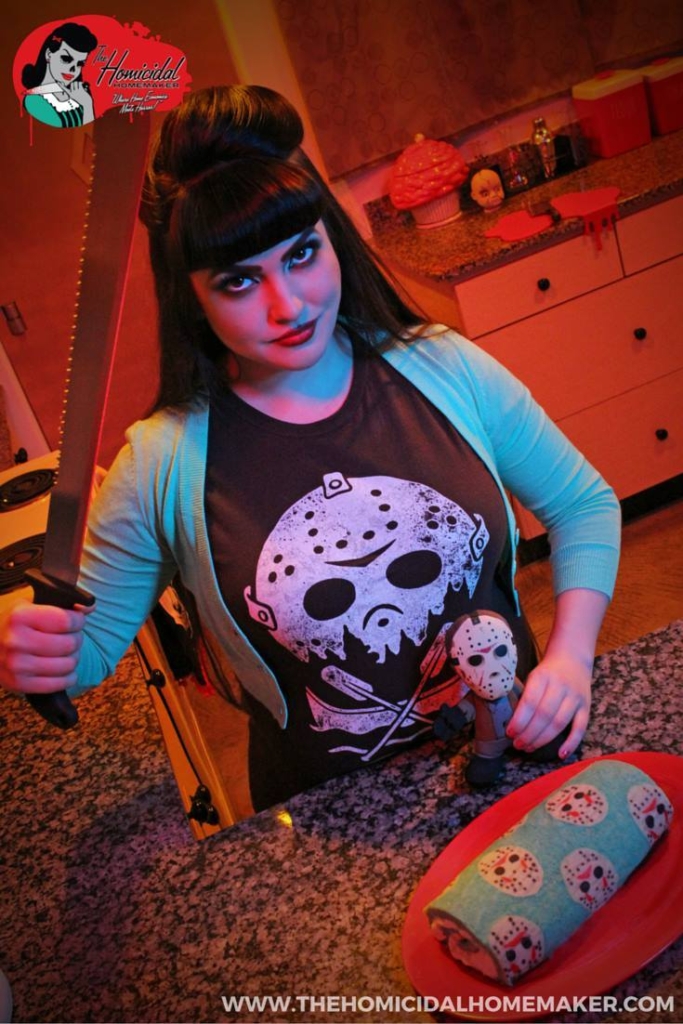 It’s really hard to pinpoint just one, because my parents were horror fans, so some of the earliest memories that I have are watching horror films with them (one in particular that sticks out in my mind is the original “The Fly”) and then sending me to bed, terrified!

But one that I immediately pops into my mind is “Slumber Party Massacre II”. I love 80’s slashers; they are nostalgic for me, because even though they have very adult subject matter, nudity, and gore, these are the films that I grew up watching. I love that they are the type of films that don’t hold back on the gore, but there are enough comical elements that you can show the film to someone who is not a horror fan, and still make it an enjoyable experience for them. I love “converting” people over to the genre, and “Slumber Party Massacre II” (as well as the other two films in the trilogy) has been a good one for achieving that.

I’ll leave it at that, because I’ll keep you here all night talking about my favorite films within each subgenre or decade of horror, and how they’ve inspired me.

4. When you are presented with a interesting food concept, what are the things that draw you to a certain project and away from others?

First off, I always make sure that it hasn’t been done before. Secondly, if the concept is based on a traditional recipe as opposed to a dish inspired by a film, I first see how I can put my own ghoulish twist on it and really up the “gross-out” factor.

A perfect example of this is my Brain Macaroni Salad. So many folks acquire things that they only use for one recipe, such as a brain-shaped gelatin mold…and not everyone is a fan of JELL-O. So I wanted to come up with a savory dish that the mold could also be used for. I have two versions of the recipe available on my website, and it has become one of my most popular dishes.

I get a lot of requests from fans to make commonly-found recipes that are all over Pinterest, and while those are awesome,  I want to offer something completely different than everyone else when it comes to my show or website. 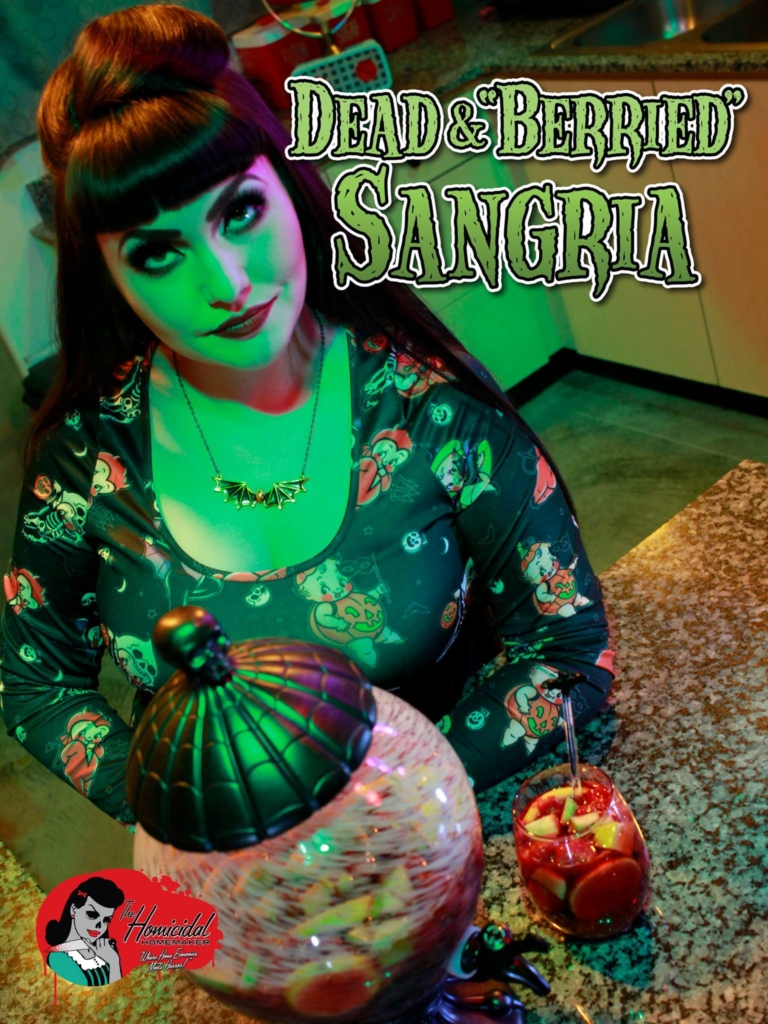 I absolutely agree that there has been a big change; even just a few years ago, people seemed shocked that a female ran my horror-themed organization, Central Valley Horror Club, or any of the horror-themed events that I host here in the area. I feel that more women will take a look at all of the ladies that are currently involved within the genre, and be inspired to get out there and do something themselves; to add their own unique, special twist on what they can contribute.

And the ladies within the genre are so incredibly supportive of one another; I think it’s fantastic. That’s what I love the most about the horror community – it’s full of the most ingenious, innovative and supportive people who share a common bond through their mutual love for the genre, that permeates their entire lifestyle, especially what creative outlets they share with the world. I say as long as you have balance in your life, do the things that you love and that make you happy, which I absolutely stand by and live up to every day.

Right now, I’m working on expanding The Homicidal Homemaker® channel to offer different types of instructional videos, including DIY projects and crafting tutorials, as well as filming more cooking videos for 2017. We have tons of convention appearances lined up throughout California, which is really exciting, and at some of them, I will be doing my horror cooking classes. I have also launched my official fanclub, the Homicidal Horde.

Be sure to connect with my on my various social media outlets to get all of the latest updates. You may also ask a question at ask@thehomicidalhomemaker.com, and you never know…it just might get answered on the show! 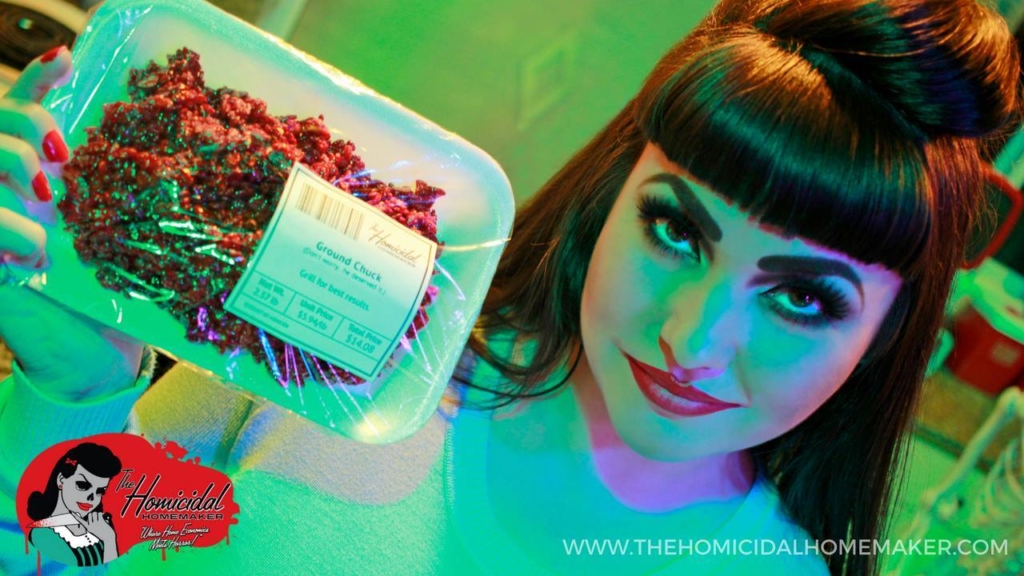