A Portrait in Neon: Talking with horror artist Marc Schoenbach of Sadist Art Designs about his career, his inspirations, and the key to his success. 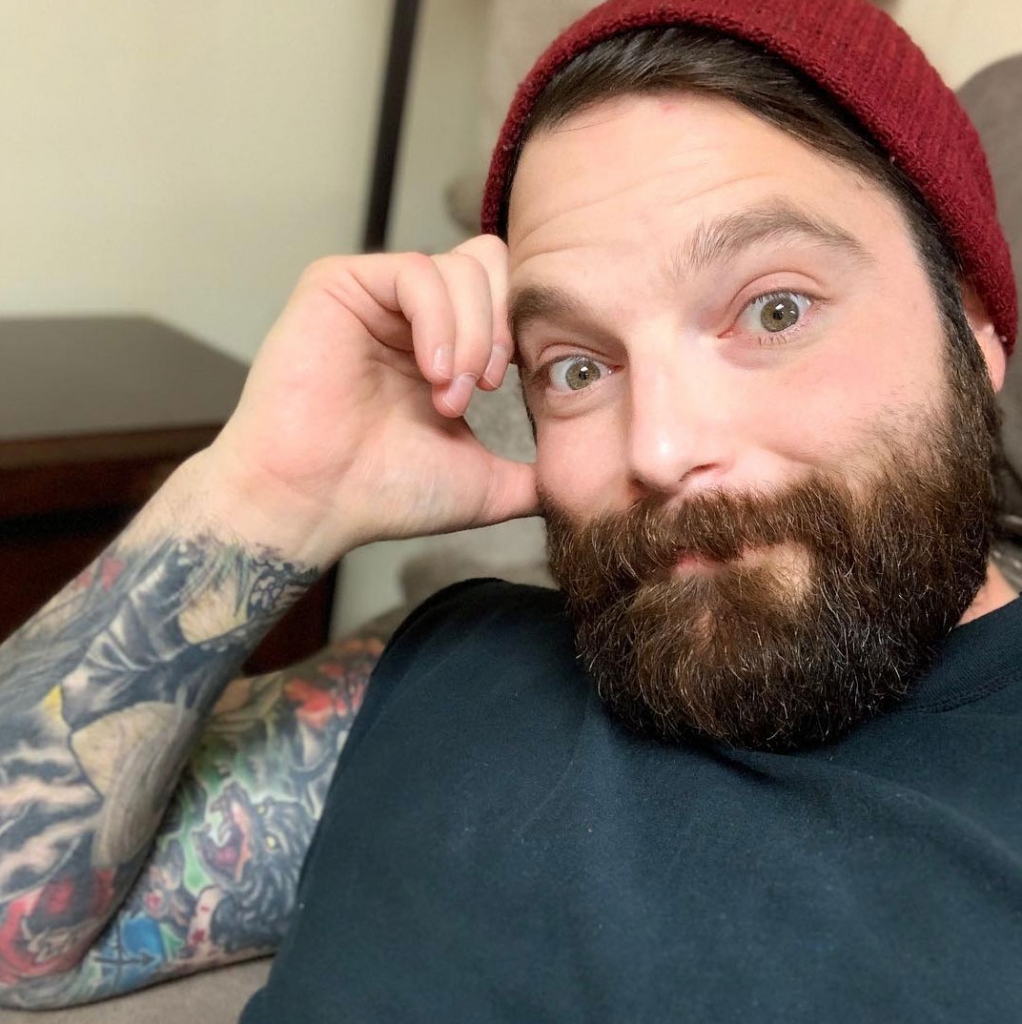 Nostalgia sells. If you don’t believe me, check the box office receipts for the latest Halloween film. It is in that same vein of thought that, out of a cloud of hairspray heavy Fe-mullets, pizza parties, and VHS tapes, emerges the Neon Hero, poster Artist Marc Schoenbach (AKA Sadist Art Designs).

He looks the part. The red lumberjack flannel, the ripped jeans, the shit-kicker boots, and the perfectly manscaped beard, oiled and groomed with products from The Holy Black, a Long Island, New York based company that specializes in “…small batch grooming products made specifically for men” that Marc has done Ad work for and raves about.

“They’re a bunch of passionate dudes doing what they love and they’re not into taking shortcuts,” Marc beams as he runs his hand through his rounded, chin brush. “They’re one of those companies I aspire to be like.” His integrity is evident, albeit humble. 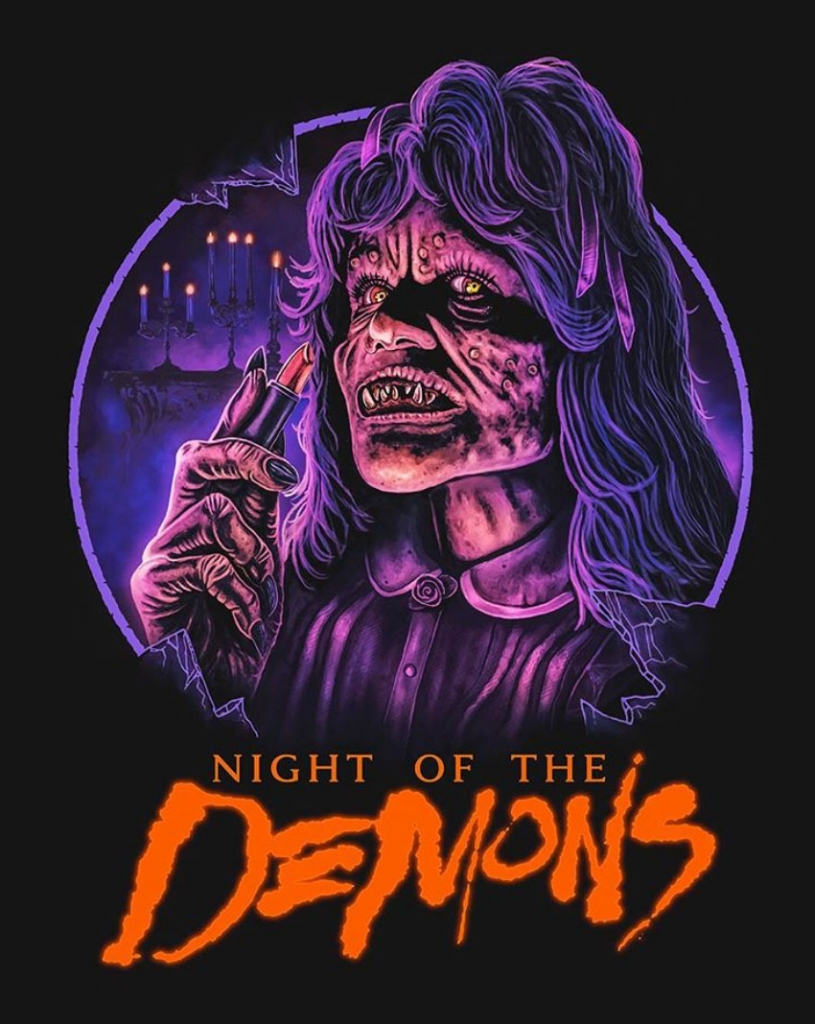 Schoenbach has settled into his world in his mid-thirties, living the lifestyle he so long desired and now has self-realized. His arms, covered in gothic witchy tattoos, are animated as he tells of his initial foray into poster design.

“I was always into Emo album covers from the 90’s. Like the real DIY style art. My older brother had a copy machine, and I’d cut photos out of magazines and make my own fliers. I specifically remember an Ad for a boxing match, Evander Holyfield vs. Riddick Bowe. I copied it, drew over it, and then copied it again to make my own poster. I was probably 11 years old, already jumping into image manipulation.”

The physical medium set the stage for his digital process, down the line. 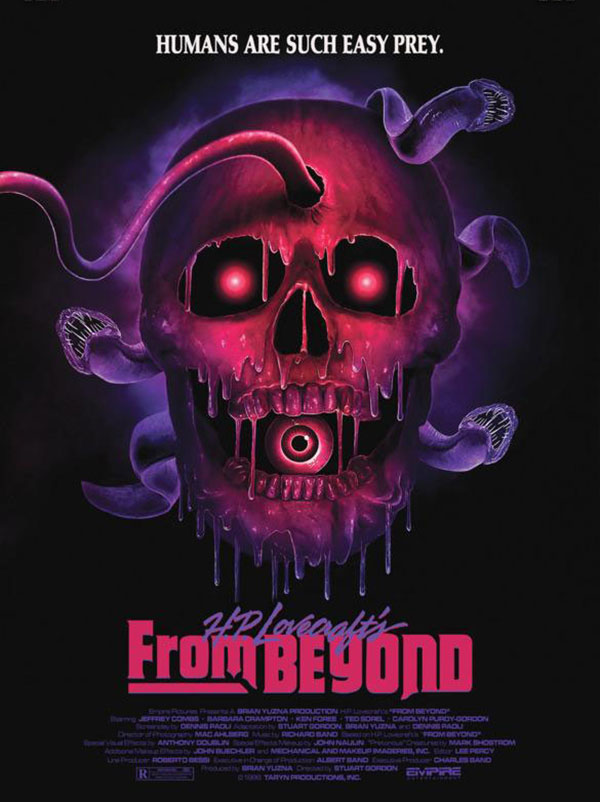 “Photoshop was a real game changer. I got an illegal copy in 2004 or something, just to take my friend’s heads and put them on other bodies or draw dicks on their faces. Then I started making fake album covers. I would make up bands like “Anus Crime” instead of Heinous Crime, and “Hoar Frost” and create art for them.”

“A few years later, I remember I was reading Entertainment weekly and there was a poster for “Grindhouse: Planet Terror” (2007). I swore it was from the 70s. Marley Shelton was holding a syringe, with a yellow background. It just blew me away that someone could make art that seemed like it came out of a time capsule.”

“At the time, I was an aspiring writer, and I had this story called “Sadist Art”, so I immediately went to my computer and created a retro poster for that story.” 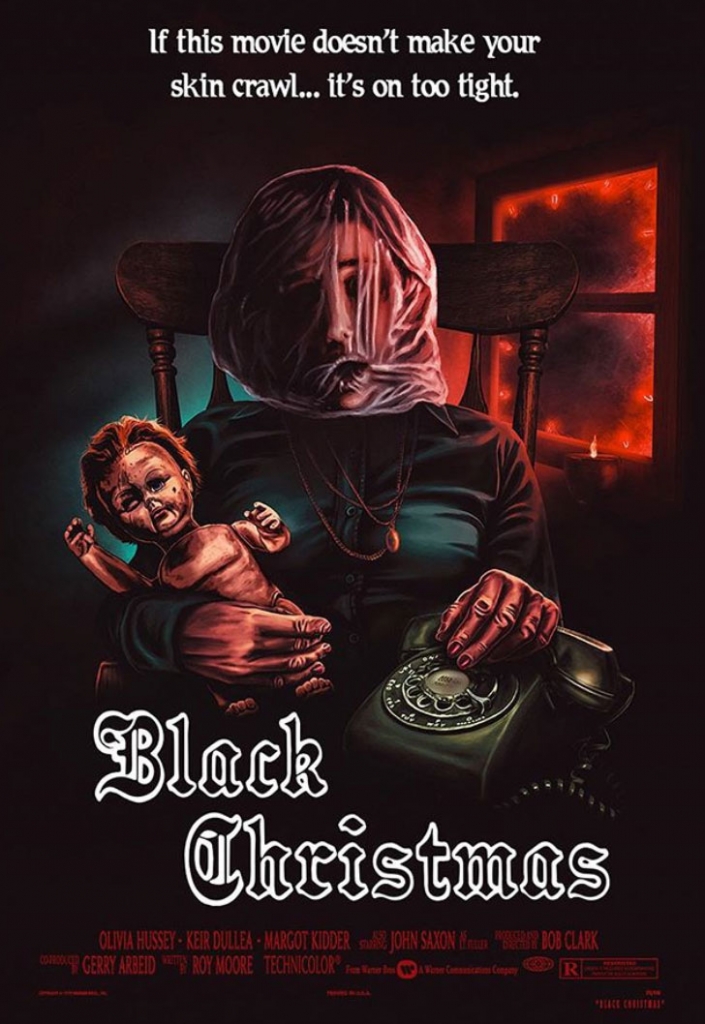 It makes sense that a Tarantino involved property would be a jump off point. Schoenbach has such an innate ability to tap into vintage film making and pop culture. Primarily because of his own passionate holdings.

‘Tarantino is a trend-setter. He’s made nostalgia salable. Those in charge bank on the fact that the people who watched this stuff when they were young are now grown and looking to re-live.”

So how does one go from admiring an art trend to creating it?

“Another round of throwback poster came across, for the remakes of “My Bloody Valentine” and “Friday the 13th” (Both 2009), and I just said, that’s it I want to make movie posters. So, I googled “How to become a movie poster artist” and this crude HTML website popped up. Their first bit of advice was “Get a portfolio”. I come from the thought process of: Go to school – get a degree – lie on your resume – get a job. This was “Do the work!” I loved that.” 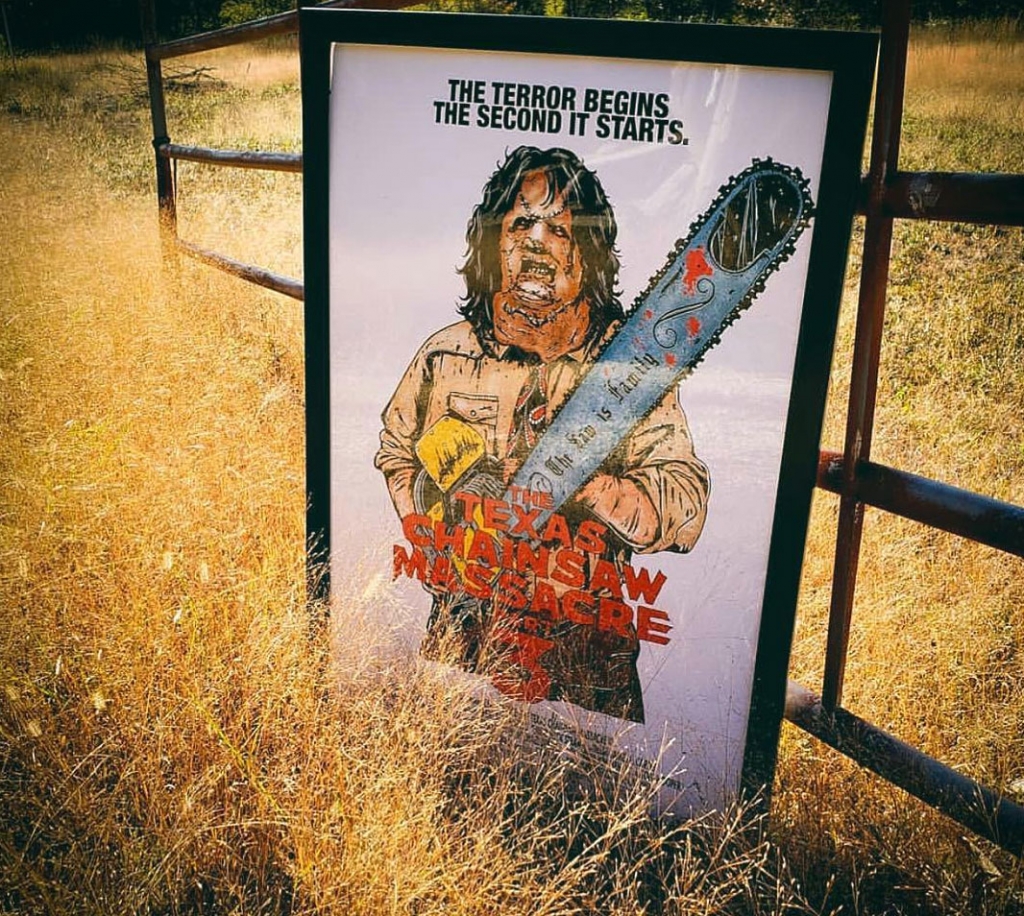 “I searched for people looking for designers and came across a post by this film maker, Newt Wallen, from Jersey. He was looking for a movie poster designer, so I answered the call. I remember I asked him for $100 and he came back with $70 and I couldn’t say yes fast enough. 50 or so hours later, I had a poster for “Midnight Show”, a film about Grindhouse Trailers. Sharing that image and getting validation from strangers was exhilarating.”

As feeble as the fee for custom art seems in present, especially for promotional purposes, it’s quite amazing to have jumped right in like that. Although the art for his first “real job”  is minimalist compared to current Sadist Art pieces, it feels like part of the family.

“I worked for free a lot in the beginning. Fifty bucks was really the magic number that I got paid if at all, but money wasn’t an issue because I had a full-time gig as a Behavior Specialist for the State. Just that someone wanted me to create for them was enough for me.” 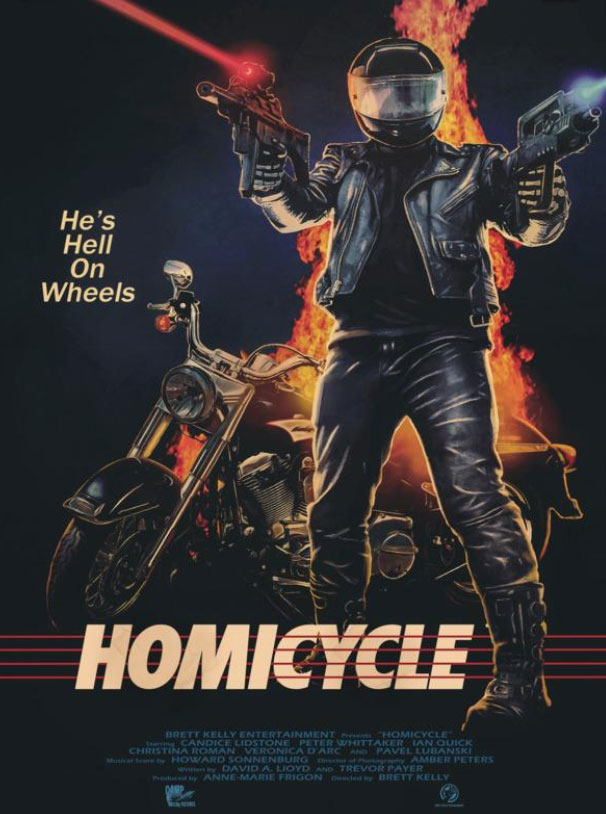 Schoenbach’s thirst to create Horror art pushed him to go out on a limb and ask for help, which resulted in him expanding his clientele to include a preeminent Horror Magazine.

“I remember watching the Spike TV Scream Awards one year and literally crying, because I saw all these people in the audience who looked like me and thought, I should be there. I reached out to an Ex-Girlfriend’s friend named Ted Geoghegan (Writer/Director of 2013’s “We Are Still Here” Dark Sky Films).”

“I threw myself out there and said, “How do I get involved?” Ted was nice and straight with me, he said the NYC Horror Film Festival was coming up and I needed to go, I needed to get in there. So, I did, and I was sitting five feet away from Robert Englund as he spoke at a Q&A and I had a moment of arrival. I was at home. I got real choked up and emotional. I met up with Ted after and he ended up putting me in touch with a friend he had at Fangoria.” 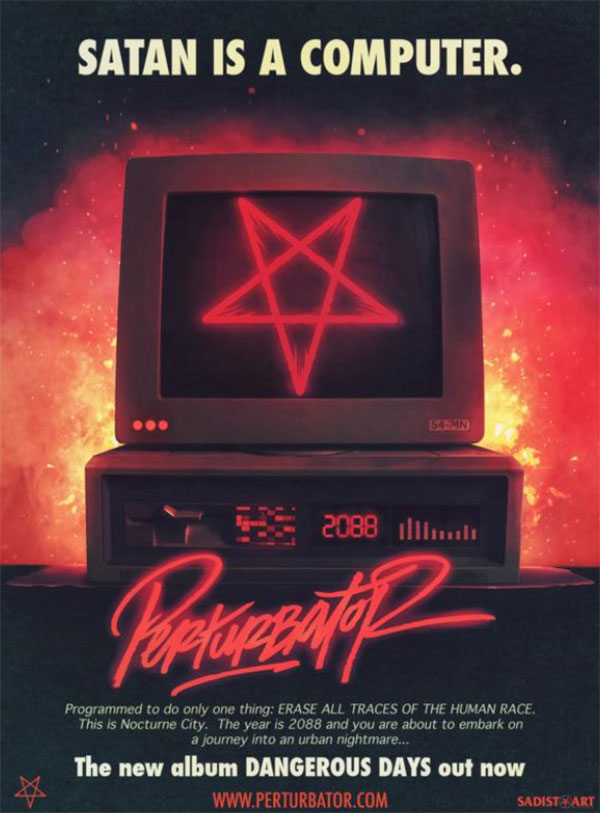 “Again, I would have worked for them for free, and I did with Tom Defeo (Former Owner of Fangoria) on a few projects. I even did a few paying gigs for the Editor in Chief at the time, Chris Alexander. He was doing some short films. I worked with Michael Gingold, who’s a great guy. I ended up doing two covers for them, the first being issue 314 with Debbie Rochon on the cover (the other being issue 342 with Barbara Steele). They even featured some of my artwork that I had done for private clients, not because the filmmakers had paid them, but just because they dug my art. I was thankful for exposure like that.”

Having now worked for a publication he held in such high regard, it would be easy to lay off the gas, but life doesn’t always allow you to idle. Marc’s tenure as a Behavioral Specialist was reaching an inevitable end. A bike ride became the catalyst for his metamorphosis. 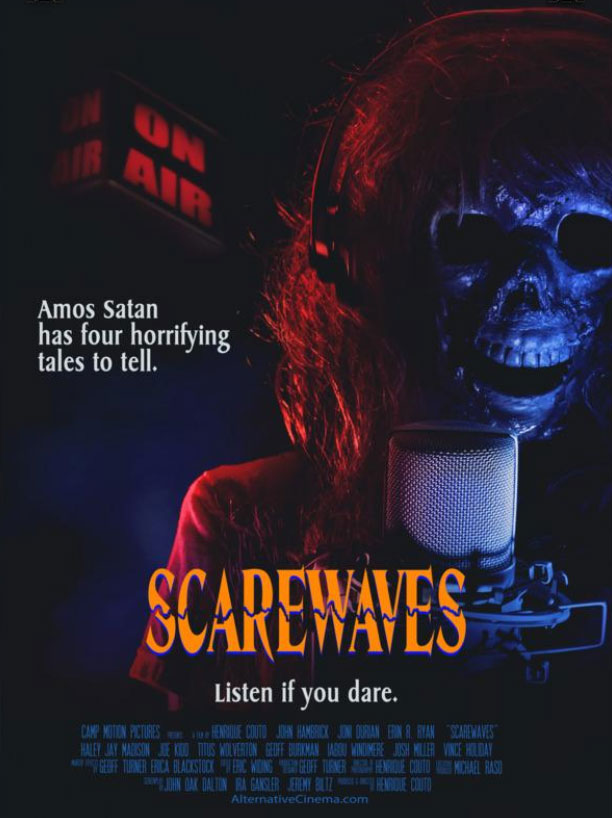 “I went for a bike ride with my good friend Frank Sabatella (Writer/Director “Blood Night: The Legend of Mary Hatchet” (2009) and the upcoming “The Shed” A Bigger Boat/Sideshow Productions) and he was telling me about the Law of Attraction. If you want something, you put it out there, do the work and you’ll see results.”

“I don’t believe in a moral God, but I do believe we’re all energy. So that day I went to the store and got a Pumpkin and I carved it in about two hours and when I was done, I said “This is going to be something.”. The last day of my job as a Behavioral Specialist coincided with the photo shoot I held with that Pumpkin and I used it to create my Halloween 2 bleeding skull poster.” 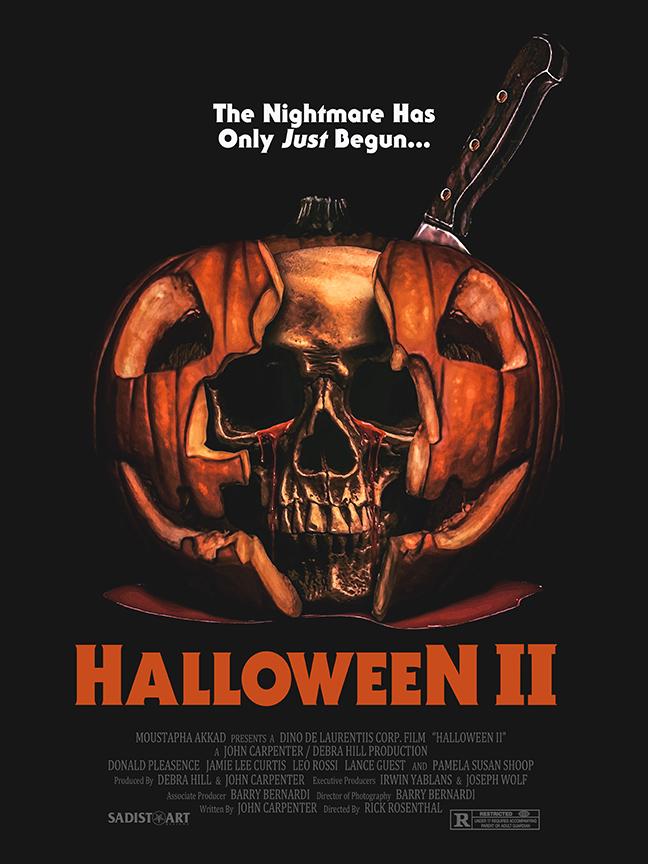 For those who are unfamiliar with this art, it mimics the opening credits, with Marc’s pumpkin splitting apart to reveal a skull crying blood. It’s so iconic that it feels like it could have been, should have been, the original 1981 poster. It has been copied and bootlegged endlessly since its creation. The tagline Marc created for the poster, “The Nightmare has only just begun”, has even been used on recent custom Halloween posters by artists unaware of its origin. It has also been bought by multiple companies for official licensed projects, including salient T-Shirt company, Fright Rags.

“I made it with the intentions, or the hope, that Fright Rags would buy it, and they did.  Create the life you want and work for it. I’ve done a bunch of designs for Fright Rags. Ben and Kimmy are great to work with.”

That advice seemed to really be paying off, and that basis of integrity, admiring companies that don’t cut corners on the quality of their product kept right on moving into working with, arguably, the top Horror Soundtrack Record Company in the game. 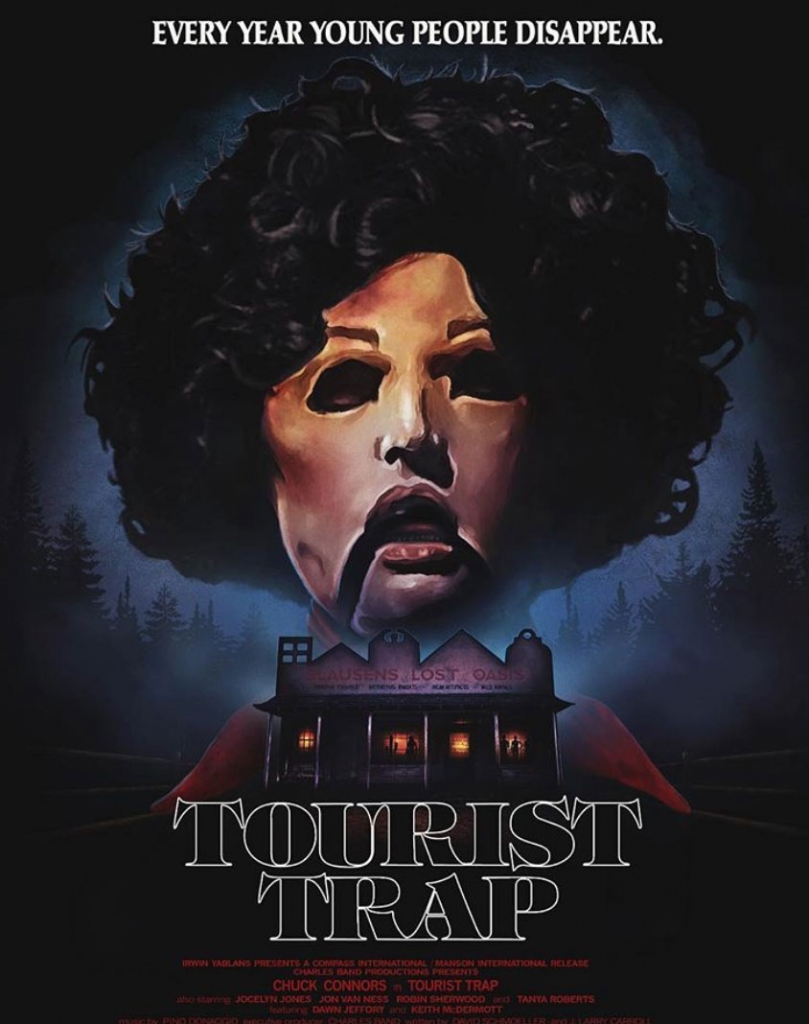 “After that I really wanted to work with Waxwork Records. I reached out to them but didn’t expect much. It ended up that Jay Yuenger (Co-Owner and of White Zombie fame) had seen a poster I had done for Frank called “Parent’s Beware” and liked it, so there was interest. Their ask right out of the gate was “Tourist Trap”, which is a movie I absolutely love so I was on board.”

Since the first LP that has donned Schoenbach’s touch, he’s also worked with Waxwork on Stuart Gordon’s adaptation of Lovecraft’s “From Beyond” (1986) in all its purple and pink slimy neon madness, as well as the offbeat, Nazi Zombie flick, “Shock Waves (1977). He’s also done work on their comic book series, “House of Waxwork”. 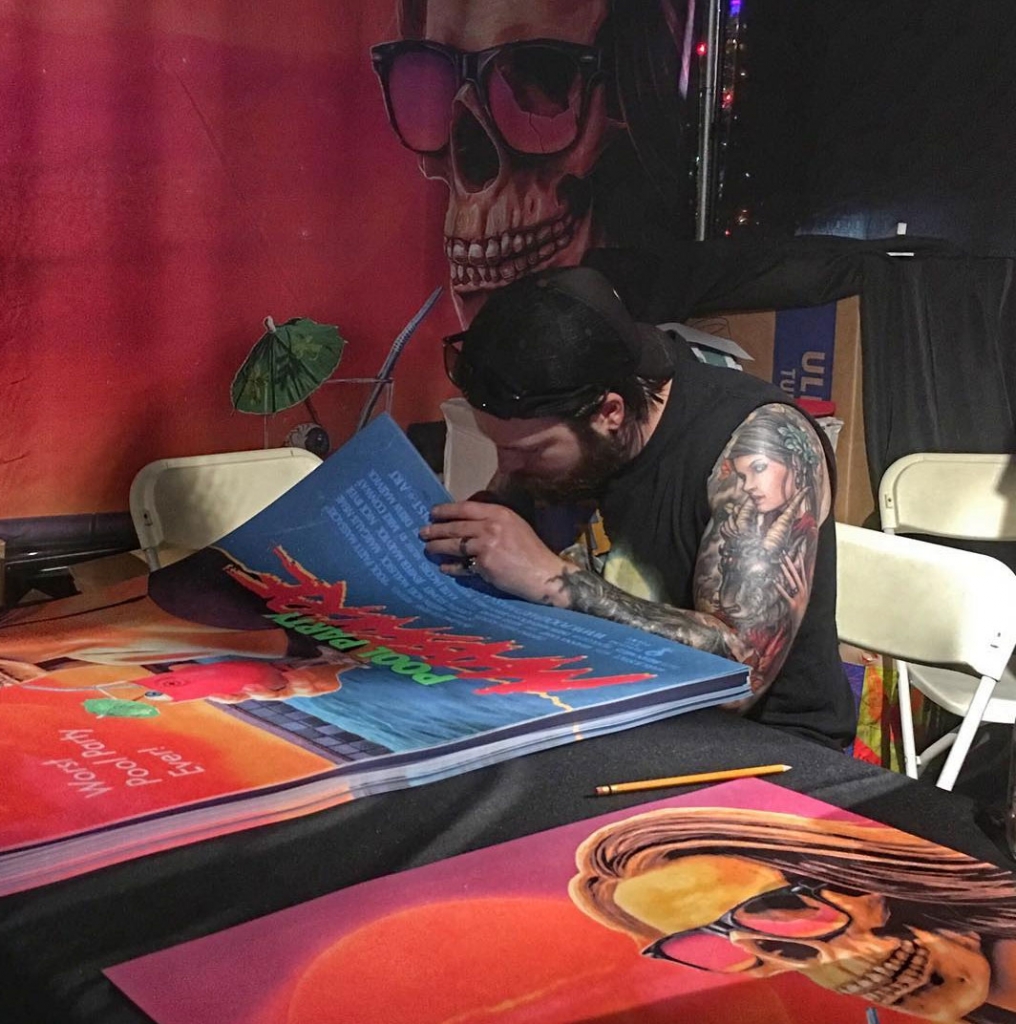 Schoenbach’s art can be seen regularly on posters and T-shirts for rising Merch company, Gutter Garbs, as well as countless private clients, such as Drew Maverick’s absolute riot, “Pool Party Massacre” (2018). So now that he’s cornering the market for retro movie posters and T-shirts, where else would he like to go from here?

“I’d love to work with Scream Factory. I really like the stuff they put out. I haven’t worked with the new regime of Fangoria, but it’s beautiful. I’m having fun working for individual clients, but a lot of my time lately has been eaten up by Official work. I love both. I don’t want this to ever to feel like it’s become a “job”. So far that’s been working out.”

Overly modest is how I would have to describe Marc, so when I mention to him the love for his work that I’ve seen throughout the Movie Poster collector’s community, he segues into praising Artists he looks up to. 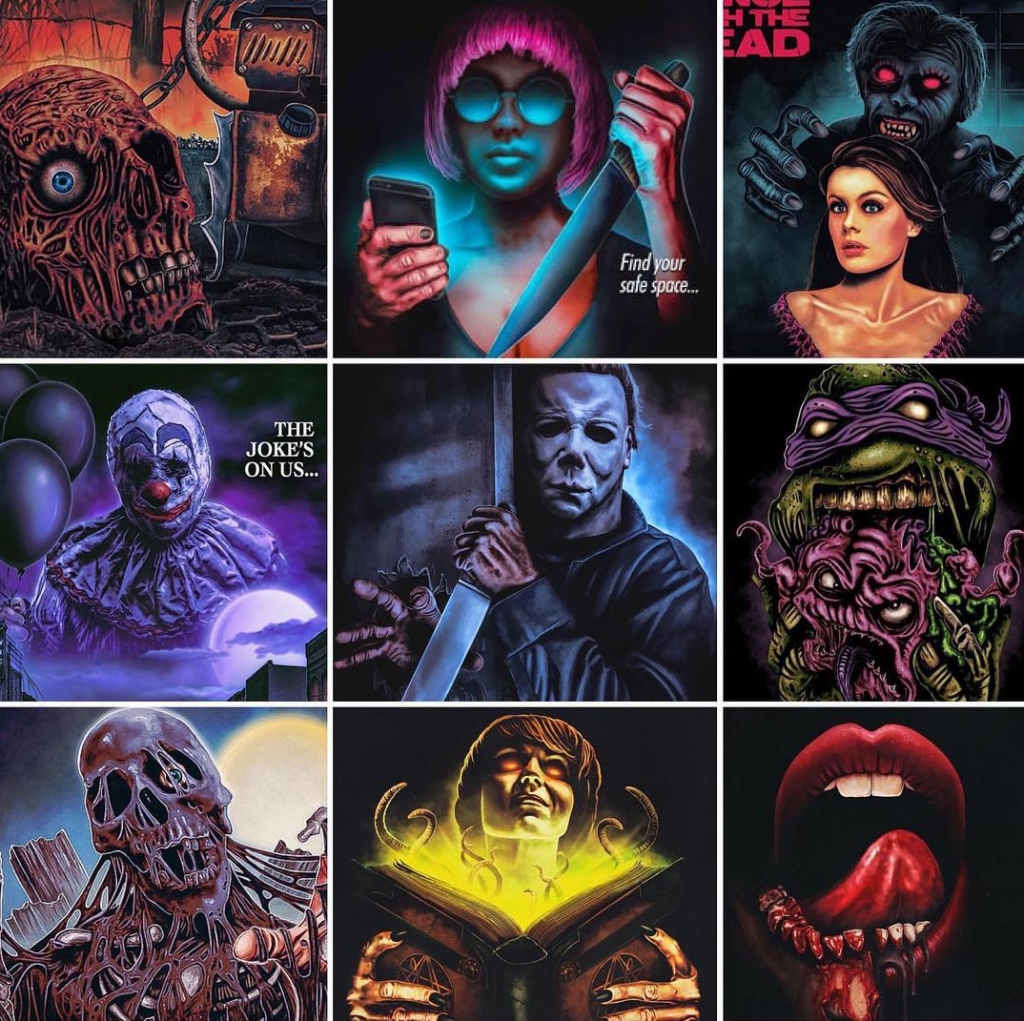 “I worked with Arrow Video for their release of “Beast Within” (1982) and Chris Lovell commented on it and man he’s just amazing. He can run circles around everyone as far as technicality. It’s ridiculous. I saw a video of him shredding on guitar and it’s obvious to me that this is a human that is just better at everything.”

“Jason Edmiston has shown me some love too. I think Jason is probably the best artist in modern time. Justin Osbourn (frequent Fright Rags Artist) is up there too and I don’t think he gets the recognition he deserves. Everything he does blows me away.”

Take a visit to Marc Schoenbach’s website www.SadistArtDesigns.com for all products, and keep an eye on his Instagram @SadistArtDesigns for all the projects he is currently working on, from film production to Art.