THE HISTORY OF METAL AND HORROR: An Interview With Director Mike Schiff

THE HISTORY OF METAL AND HORROR is a documentary exploring the evolution of heavy metal and horror and how they merged over time, featuring interviews with some of metal and horror’s biggest and most iconic names. I reached out to the director of the film, Mike Schiff, and he was gracious enough to provide me an interview and share more about his exciting project currently crowdfunding on Indiegogo.

Hello, Mike. It’s an absolute pleasure to be speaking with you. If you could, please start by telling us a little about your professional background and how you came to be involved with this project. 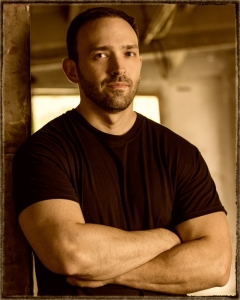 I began studying film when I was about 14 years old and took film courses all the way until college. After that, I began freelancing in video production and ultimately landed a job working as a freelance editor and camera operator for Howard Stern’s television show. After two years, I was promoted to a staff producer. Working there opened up many doors for me, which ultimately lead to me working on my documentary, The History of Metal and Horror.

How did the idea for this documentary come about?

I became friends with producer, Robert Lucas who brought me along to film interviews and activities at various horror conventions around the country. Two of those conventions included Rock and Shock and Kirk Von Hammett’s Fear Festevil. These were not just horror conventions but metal concerts as well. I started paying closer attention to the fact that there was a clear connection between metal and horror and wanted to explore that further. I felt it was time someone made a documentary about this connection. Since I had began so many great relationships in both the business of metal and horror, getting interviews with those involved became easier and easier to obtain.

You’ve interviewed some incredible people for this film—real icons in the world of metal and horror. Has it been difficult getting such legends to sit down and talk to you?

Some were more challenging than others. None of them were really made possible by cold calls or emails to management. All of them were made through friends, or friends of friends, or friends of friends of friends. For example, through Richard Christy at the Howard Stern Show, I made friends with Jose Mangin at Sirius XM, Jose put me in touch with Corey Taylor’s manager, she then put me in touch with Slipknot’s management, who ultimately scheduled an interview with Corey before a Slipknot show in New Jersey. Other times, we would just be at various conventions, simply walk up to actors and musicians there and ask if they’d do an interview. That’s how things worked out most of the time. There are a few more artists I’m working on now, though sometimes their schedules are hectic. 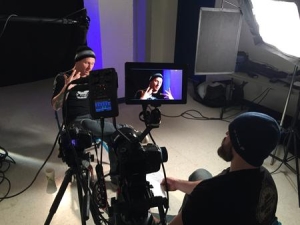 Who has been your favorite interview so far and why?

I don’t know that I have a favorite since I’ve been a fan of many of them for so long. Every single person I’ve interviewed proved to be incredibly humble, friendly, and happy to be part of this project. I remember Corey Taylor insisting his tour manager give him more time with us because he enjoyed talking about horror so much. Those kinds of things really stand out for me and make me appreciate the artists so much more.

Is there one person you really want to interview that you haven’t been able to yet?

Ozzy, without a doubt. Metal began with Black Sabbath, and pretty much the inclusion of horror into rock music. Though I have interviewed Sharon in the past, I have no direct route to Ozzy, so getting an interview is gonna be a major challenge. It’s always worth a shot though.

Ozzy would be amazing! Is there anyone who declined an interview that you really wish you could have talked to?

Peter Criss from Kiss. I met him at a convention and he was incredibly nice. I told him a little bit about the project and he politely passed on an interview. At the moment, I didn’t have a trailer or press kit for him to look at, so it’s understandable that he would be reluctant. Now that the project has progressed, I may approach him again. 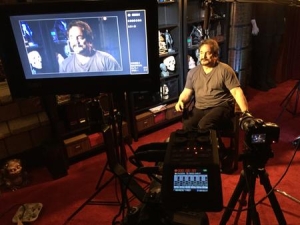 Ok, switching gears a bit…what’s the first movie that made you a horror fan and how old were you?

I enjoyed horror very early on. Though it wasn’t necessarily horror, Clash of the Titans was probably the first film I saw that had an effect on me. Later on I started getting into films like A Nightmare on Elm Street, Evil Dead, Friday the 13th, The Thing, The Exorcist, etc.

Those are all great films. So what would you say are your top five favorite horror movies of all time?

Always a tough one to answer and my list changes constantly. But as of today, Dawn of the Dead, A Nightmare on Elm Street, Evil Dead, Prince of Darkness, In the Mouth of Madness. Tomorrow I’ll probably have a whole other list. 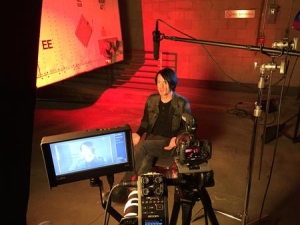 What’s the first band/artist that turned you on to metal?

I think I first was into Guns N’ Roses, then I got more into 90’s alternative like Nirvana, Soundgarden, Alice in Chains, and later I got into heavier stuff like Slipknot, Metallica, Slayer, etc. I was actually a late metal bloomer.

And, of course I have to ask, who are your top five metal artists of all time?

As a filmmaker, which directors have inspired you the most in your career?

Awesome list! Ok, back to this incredible project you’re working on…where are you at with production of the film?

I shot the first interview in November of 2014 with Chris Jericho, so we’ve been working on it for almost a year now. I would like to have the project completed in one more year, at latest. It really depends if we can get funded well enough to get everything done. As of now, I have almost 30 interviews and am piecing what I have together.

Once it’s completed, what is the distribution plan for the film?

We’re still exploring various options on that. Of course we want to sell DVD/Blu-Ray, get it on Netflix, and wherever else. 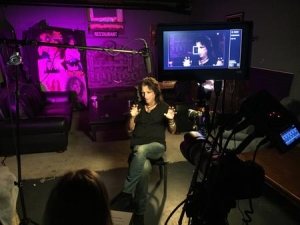 What has been the most rewarding part about working on this project?

Building friendships with the artists and their management. I was a huge fan of so many of the musicians and actors for so many years, and now they know who I am and are excited for my project. I get to take Tom Savini to Katz’s Deli for lunch, get a bagpipe lesson from Jonathan Davis, make small talk with Corey Taylor from time to time, meet legends like Alice Cooper, and so much more. Plus I often get press passes to shows so I get to shoot photos right in front of the stages. It’s all very fun

What has been your biggest challenge so far trying to bring this vision to life?

Raising money. The project has become very popular with fans all around the world but it’s so hard to get people to donate to the campaign. If everyone who watched the video trailer on YouTube donated just $2, we’d be fully funded by now.

Speaking of raising money, you’re currently crowdfunding on Indiegogo. That can be a hard road. Why did you decide to go the independently funded/crowdfunded route?

I wanted to have more control over my own project. Once you get big time producers and investors involved, things can get a bit complicated. I also wanted to make a project that the fans could help build. 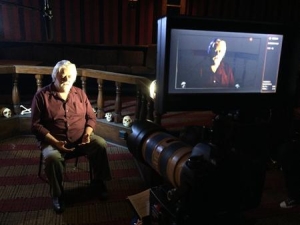 Why do you think horror and/or metal fans should contribute to this film?

It’s a project that I think many fans of both genres will love. It will be informative but also a lot of fun because the artists involved gave so many great answers to questions. There will also be a short wraparound film included which will tie all the segments together. The film itself may even include some familiar faces.

If you don’t reach your crowdfunding goal, are there plans to launch another phase of the crowdfunding campaign?

That’s the plan. Luckily, I have enough to keep the actual production going and maybe cover some post. I hope we can get a boost before November 11th, but a second phase will probably be necessary.

It seems like an incredible project that fans should really want to get behind. How can fans stay connected with what’s happening with the film as things develop?

I regularly update Facebook, Twitter, and Instragram. The handle on all of them is themetalhorror. I will also include more photos and news on my website, metalhorror.com.

I’m personally so excited about this project, and I hope others will be as inspired as me to come on board and help make this dream a reality. I can’t thank you enough for your time. Before I let you go, is there anything else you’d like for people to know about this project?

I want them to know that this isn’t gonna be just an informative, talking-head documentary. There will be a lot of fun stuff involved and the more funds we can raise, the more we can add. I want this project to be something the fans can be excited to take part in.

Don’t miss out on the opportunity to support indie horror and help make it happen for The History of Metal & Horror (THMH). Keep up with all the latest project news and updates or contribute to the campaign using the links below.