Monster’s Pick: From Beyond

The Lovecraftian tale From Beyond is a gore lover’s dream, and great acting combined with excellent direction make it an essential 80’s horror classic. 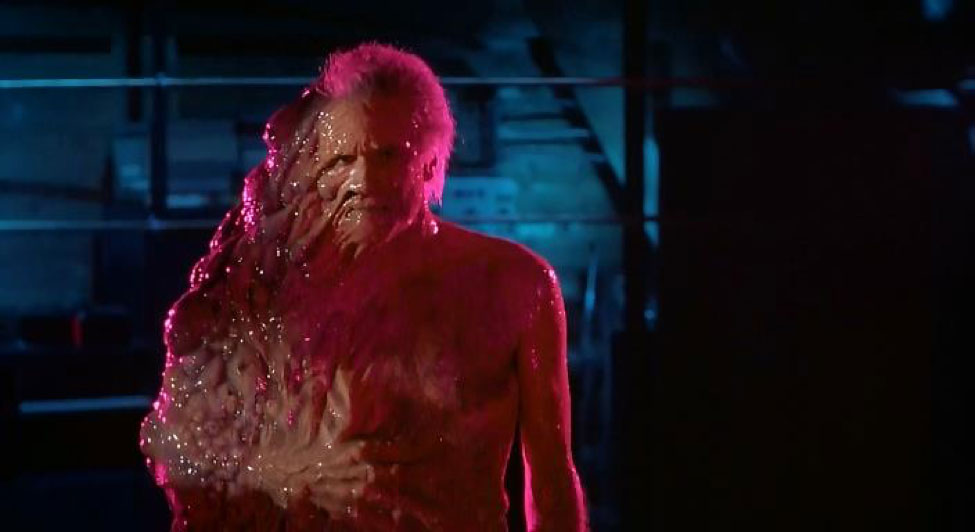 Imagine there was a machine that existed, which would allow you to see into another dimension. Would you be terribly frightened or fearful of what lies beyond? What if the dimension you witnessed was chock-full of grotesque aberrations?

From Beyond is a 1986 horror film, packed to the hilt with gore, blood, monsters and some of the best practical special effects to hit the screen since John Carpenter’s masterpiece, The Thing (1982). 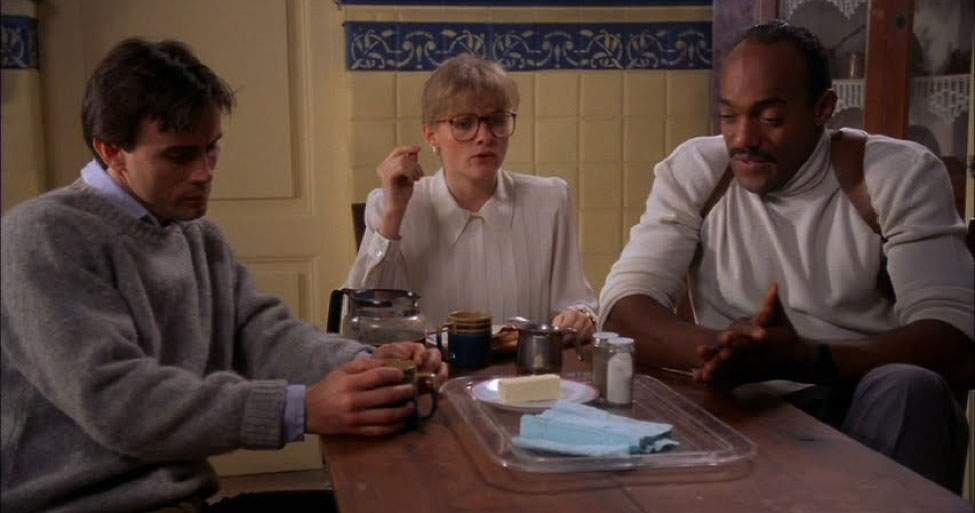 Dr. Edward Pretorius (Sorel) and his assistant Crawford Tillinghast (Combs) have invented the Resonator, a machine which controls the sixth sense via the pineal gland, allowing anyone within its range to see into another dimension. However, after a night of experimenting goes awry, Dr. Pretorius is found decapitated, and his assistant Tillinghast is captured while trying to flee the scene of the crime. What happens next, will leave you breathless.

‘From Beyond’ is one of the all-time classic gore films in the genre. The practical effects displayed therein are arguably equivalent to that of Carpenter’s ‘The Thing’. Granted there are a few CGI effects conveniently and sparsely sprinkled throughout the film, the majority of effects are practical and simply put…astonishing. If you love practical creatures and beautifully crafted, monstrous abominations, this is the film for you. 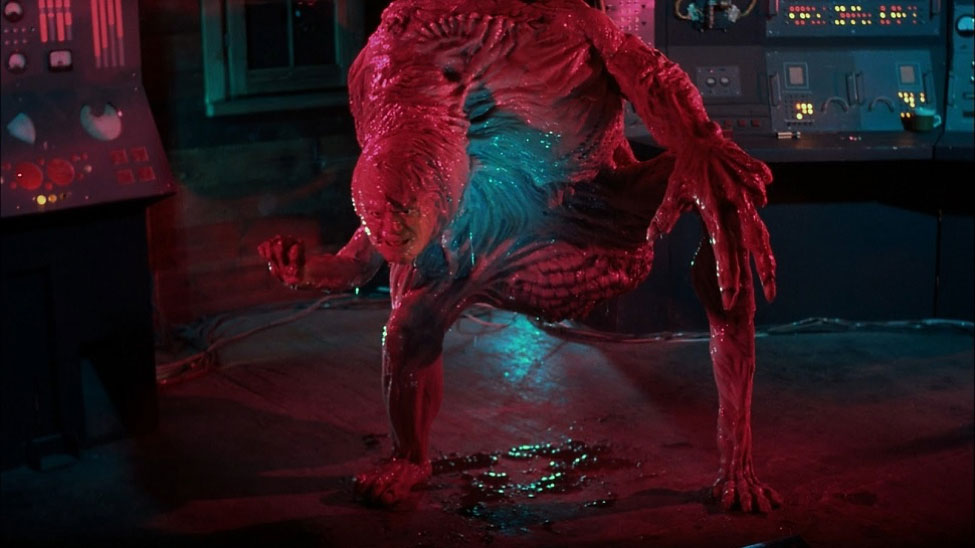 As a horror fan taking a look at this film from the outside, there are just so many checks in the win column, which make it a cult classic on so many levels.

From top to bottom, From Beyond is stacked. From the legendary director Gordon, to its highly talented and genre favorite actors, to the Lovecraftian story and of course the insane and gorgeously fabricated practical gore, this film has it all. It’s a horror lover’s dream come true.

The front line acting in this film makes it easy to concentrate on other areas, being there’s no real concern with its character portrayals. Jeffery Combs is one of, if not the ultimate, horror actor, appearing in numerous films within the genre over the last few decades. Combine that with Ken Foree, another legend in the genre, and toss in Barbra Crampton and Ted Sorel and their horror field credits, and you have the perfect recipe for success. Then there’s the nearly untouchable practical gore which really puts the film over the top.

Then again with Greg Nicotero and Robert Kurtzman, of which would later make up the majority of the KNB effects crew, it’s no wonder the practical marvels which were created. The distorted and malformed Dr. Pretorius creature is content straight out of a child’s nightmare. And of course, the peeling of facial flesh in one scene is an indelible part of horror history. The obscenities residing in this film forcibly leave an unshakable residue upon viewers.

The directing of Stuart Gordon has always produced lasting images and an abundance of scares. He’s responsible for some of our most beloved 80’s gore flicks, along with some exquisite 90s and 2000s films. Some of his most truly menacing features include Re-Animator (1985), Castle Freak (1995) and Dagon (2001). Also his Master of Horror episodes “Dreams in the Witch-House” and “The Black Cat,” are genuinely terrifying. And although it’s not considered a horror film, King of the Ants (2003) is one of the most bizarre, sick and twisted films in Gordon’s catalogue. 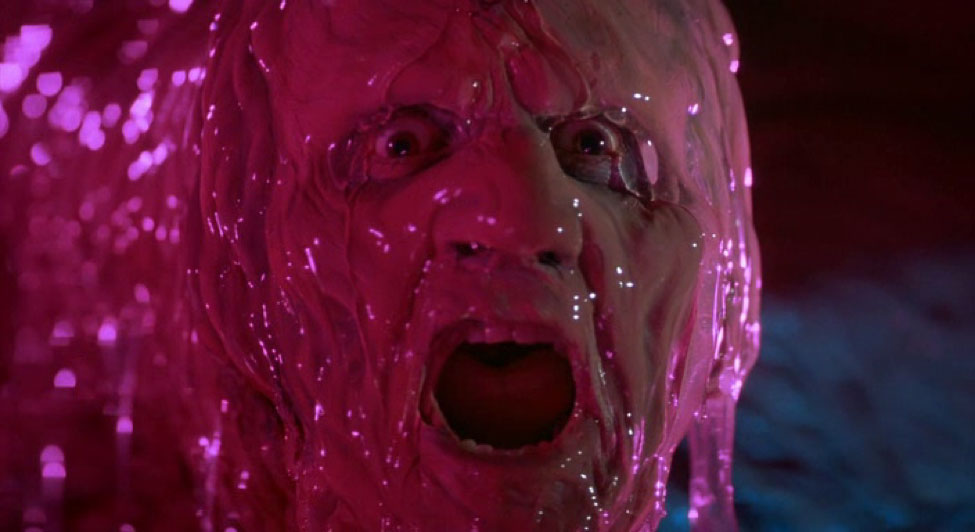 What really rounds out this film and makes it one of a kind is its insane tale based on the Lovecraft short story, “From Beyond”. Directly responsible for the existence of some of the wildest fiction known to man, H.P. Lovecraft is to blame — and well deserving of all the credit. He’s solely responsible for some of the genres most horrific subject matter. Even John Carpenter’s magnum opus “In the Mouth of Madness” is loosely based upon Lovecraft material.

I give this film 2.5 out of 3 scratches for its all-around horror precision and its vomit inducing visions of terror.

Overall, From Beyond spares no expense at the disgust of its viewers. On the contrary, its goes full force in hopes that you’ll be regurgitating your supper in a dramatic fashion before the end credits. This film is not for the weak stomached nor the faint of heart. So, if you’re brave enough, give this one a go. Just remember to watch at your own risk.